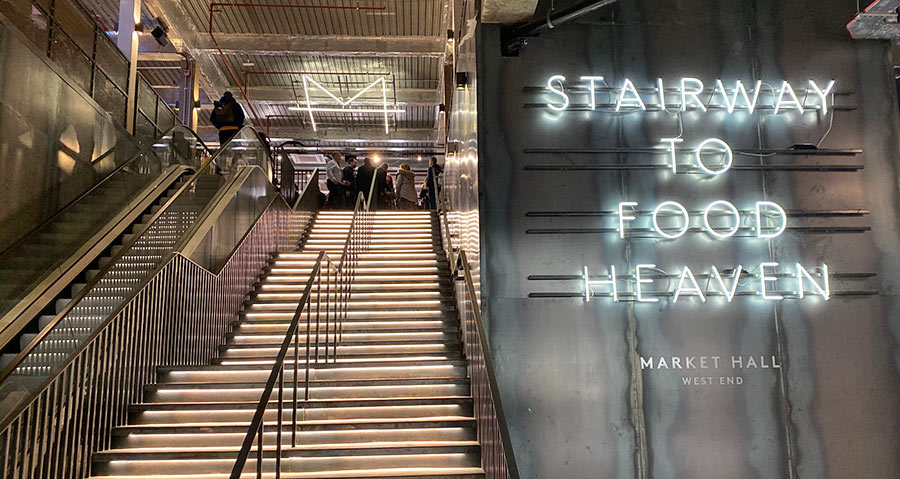 What can you tell us about Market Hall West End?

If you're familiar with the Market Halls in Fulham and Victoria, then there's definitely familiarity in the setup. Essentially it's an upmarket food hall/court - and this has certainly been the year for those - with a collection of kitchens serving a wide range of food, and plenty of bars too.

It's just a couple of steps off Oxford Street, very near Oxford Circus. Head up Holles Street (that goes along the right-hand side of John Lewis) and you'll see the big entrance, halfway up on the right. It's is going to be extremely handy if you're shopping on Oxford Street over the Christmas period. 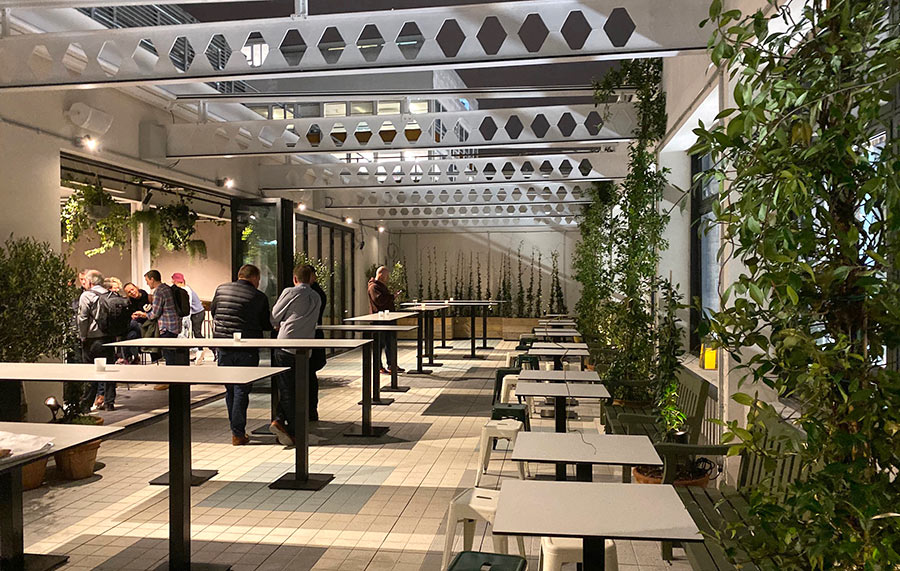 What's different about this Market Hall?

It's definitely the largest, for sure, taking up a huge space of the former BHS building. It also feels much more industrial than its predecessors (the space has a little less architectural history than the others, so it's a fair choice) and we'd say there's also a lot more space to sit down too, spread out all over the areas. We did also notice a few references to BHS in the designs.

There is a small outside terrace too, overlooking John Lewis. That will be handy in summer but we have to admit that the Victoria Market Hall Terrace - and indeed next-door John Lewis - are better alfresco spots. 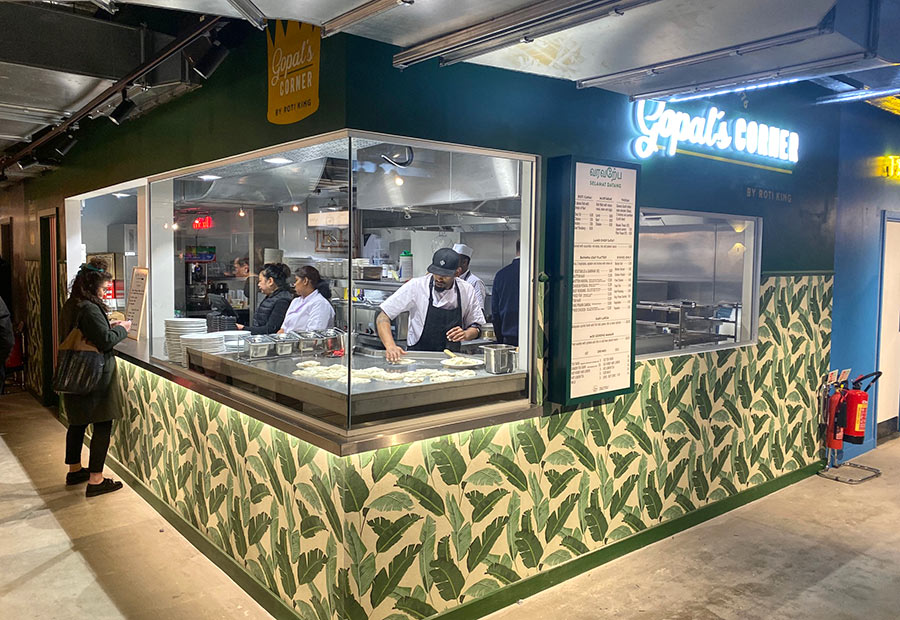 Gopal's Corner with a proper corner. You'll stop to watch them in action here...

If you're new to Market Hall - or any of the more modern food courts - it's fairly simple. Wander around the hall and work out what you want to eat. Order your food and you're given a buzzer that will tell you to return when it's ready. Order a drink at the bar in the meantime and grab a seat - when your buzzer goes - head up and grab your food. And repeat.

So what's on at the new Market Hall?

We'll start with what we had ourselves on the night we visited (which turned out to betheir first night, just hours after the builders had left). We kicked off with these three: 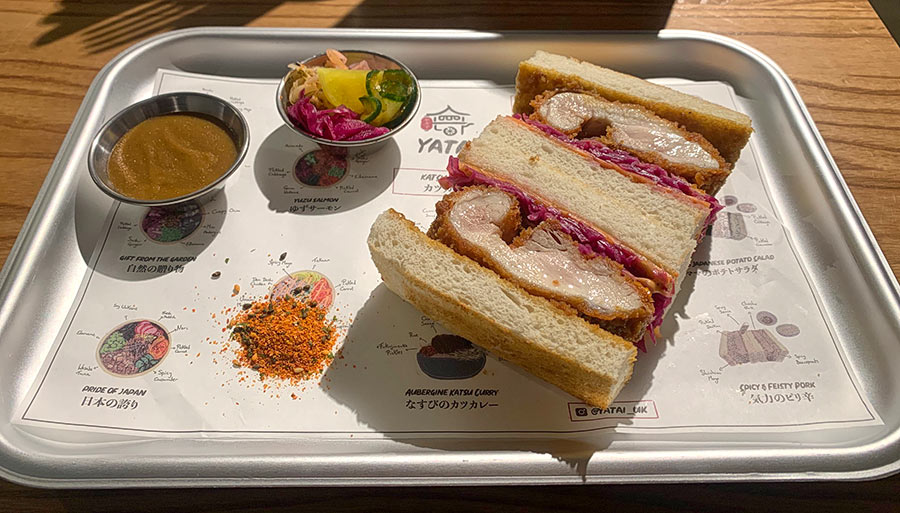 Yatai - this is new to Market Hall and comes from Angelo Sato (ex-Head Chef of Restaurant Story). Here he's serving up a combo of chirasi sushi bowls, omakase sushi plates and their version of London's sandwich of the moment, the sando. This is the chicken katsu curry sando - with Japanese curry sauce, pickled carrots, shichimi and pickled cabbage (£8.50). It's so freaking delicious.. And there's a potato salad sando for if you're both vegetarian and carb loading. 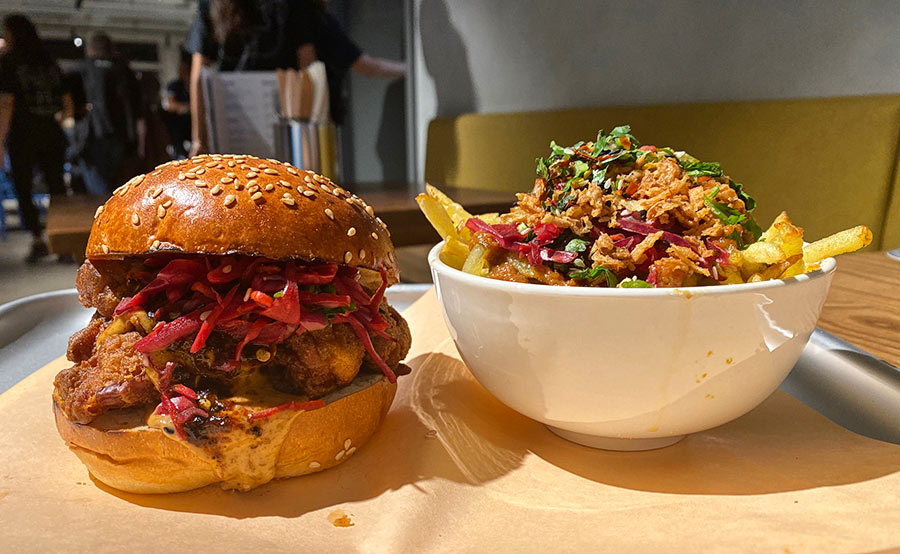 Goodbirds - this is also new, from the people behind Flank (whose food you can try in Victoria). This kitchen is all about rotisserie chicken and this is their fried chicken bun - Asian style fried chicken, peanut & cashew mayo, smoked sambal, crunchy pickled veg (£9). On the side is the excellent "skin on war fries" with with Dutch style peanut cashew sauce and crispy onions. We'd definitely recommend both of these. 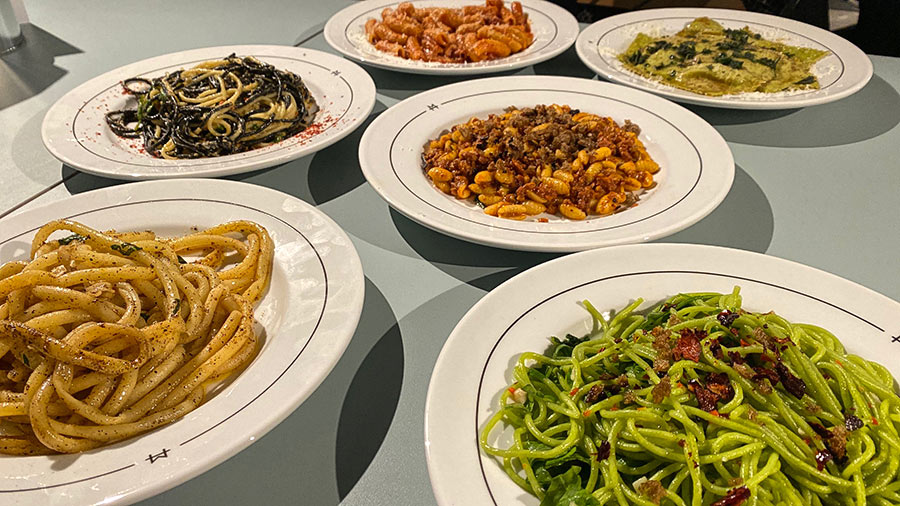 Pastaio - we ran into Stevie Parle (the man behind Pastaio) and asked for advice on ordering. So he ordered us everything (there were a few tables around us who also benefited greatly from this). As to be expected, all the pasta was as good as the Soho original - with their cacio e pepe always a standout. New to the menu at Market Hall West End are the "crab, chilli, rocket and black and white spaghetti" (£9) as well as the spinach and squash ravioli (£9 - with bottarga for £12) which was a stunning dish.

And what else is available?

Obviously. after all that pasta (and this wasn't the only food hall we were visiting that night) we couldn't manage anything more. But there's a lot more to choose from. Also on offer at Market Hall West End is: 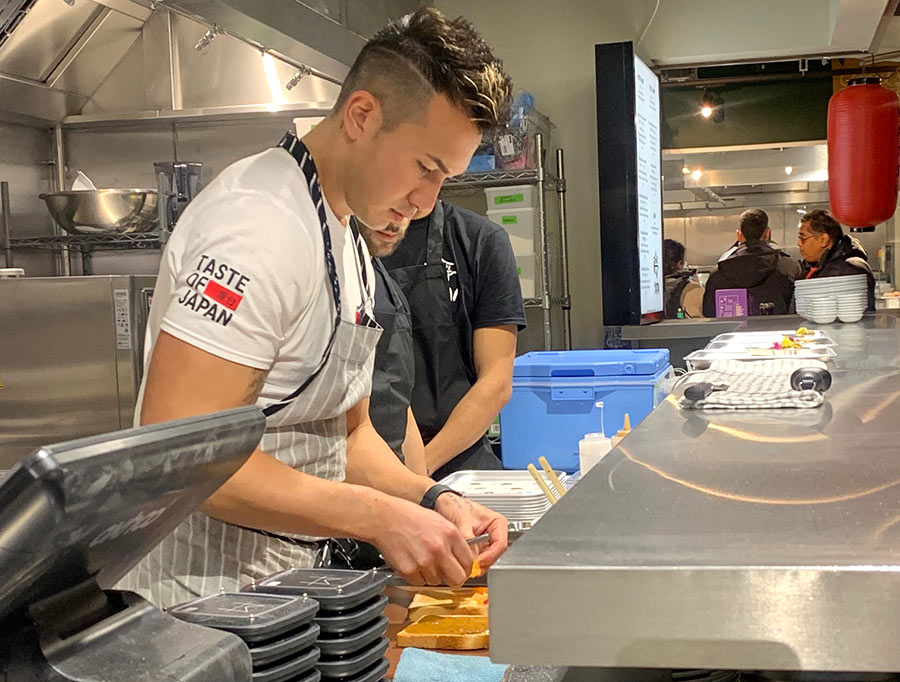 And what about drink?

There are three bars - two on the main floor and a large one just beside the roof terrace. That alone looks like a very handy spot to meet in the area if you're just after a quick drink. Cocktails are £9.50 - £11 and there's plenty of wine and beer available too (but we forgot to grab those prices).

We've liked both of the Market Halls before this one, but this is another level for them. It's bigger (there are lots more seats) and is so handy for any shoppers on Oxford Street. This combined with Mercato Mayfair down the other end of Oxford Street and Arcade at the top end now means that Oxford Street has three of the best food courts in town. And over the Christmas period, we think any of them would be a great place to escape the throngs.