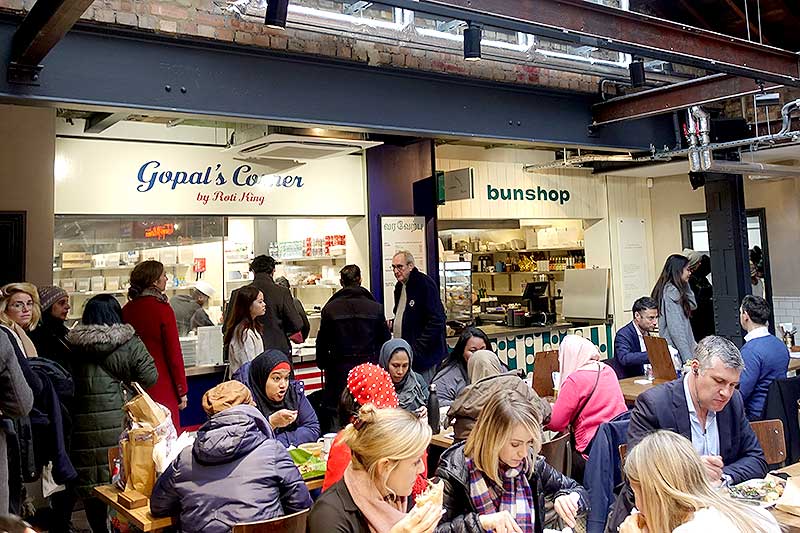 Head straight for that place in the corner first...

The first one opened in Fulham earlier this year - we wrote about that here (but note that the line-up has changed since then). Put simply it's a next-level food hall, pulling together a selection of food outlets (and bars) all under one roof - but with a pretty high pedigree on show.

And where exactly is Market Hall Victoria?

It's right outside Victoria Station, in the building right opposite the main concourse entrance (taking over the space left by Pacha). There's an entrance to Market Halls either from that site or directly across the road from Nova. So it's very close to the station, making it a very easy pit stop either for breakfast or for a drink and a snack before grabbing a train home. They even have train departure boards if you're wondering which train to catch.

Unlike the Fulham Hall, this is currently a two storey affair, with bars and food vendors split across both - so there's a lot more space. And they're also opening a roof terrace next year - so that'll be a huge draw come spring.

So how does the ordering work - is queuing involved?

Yes and no. It depends on the vendor and the food involved but once you put your order in (there might be a small wait for that), you'll most likely get a buzzer that will alert you when your food is ready. So just look for something you fancy, order, grab a drink at the bar and a table and wait for your buzzer to go off. While it's a very easy place to eat alone - there are plenty of stools dotted around - going in at least a pair makes sure someone saves your table if either of you gets buzzed. Then you can work in a tag team while you order at different places.

So onto the food - what's there?

In total, there are 11 traders to choose from - as well as a coffee shop and the bar. We visited one lunchtime and - although we gave it a damn good try - we couldn't quite visit them all. But here's what we managed... 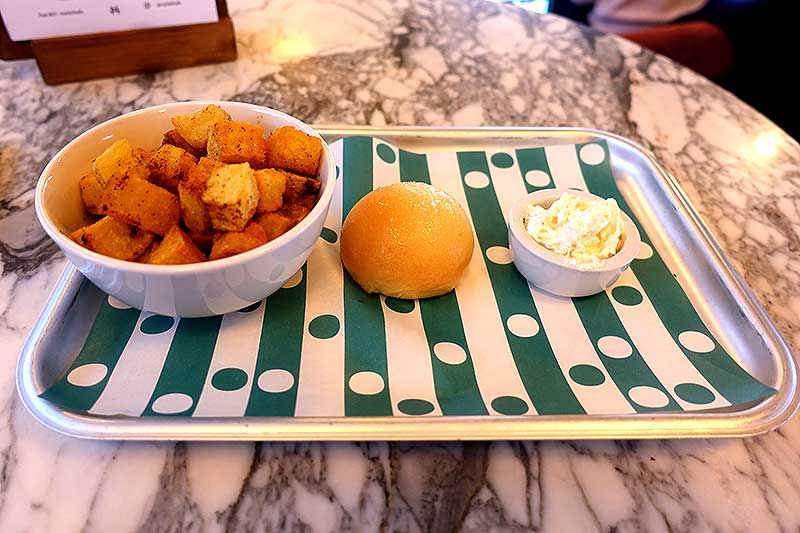 Who: Bunshop
What: Outpost from the people behind The Marksman. If you haven't made it out to this excellent Hackney pub, here's a chance to try one of their signatures.
What we had: The beef and barley bun with horseradish cream (£5) and devilled potatoes (£3.50). Small but perfectly formed soft baked and then steamed roll stuffed with braised minced short rib was lovely but you'd definitely want a side too to make a meal of it. There's a meal deal for two buns and a side for £12.
Also try: The breakfast bacon roll with braised ham hock, bacon & toasted oats sounds amazing. 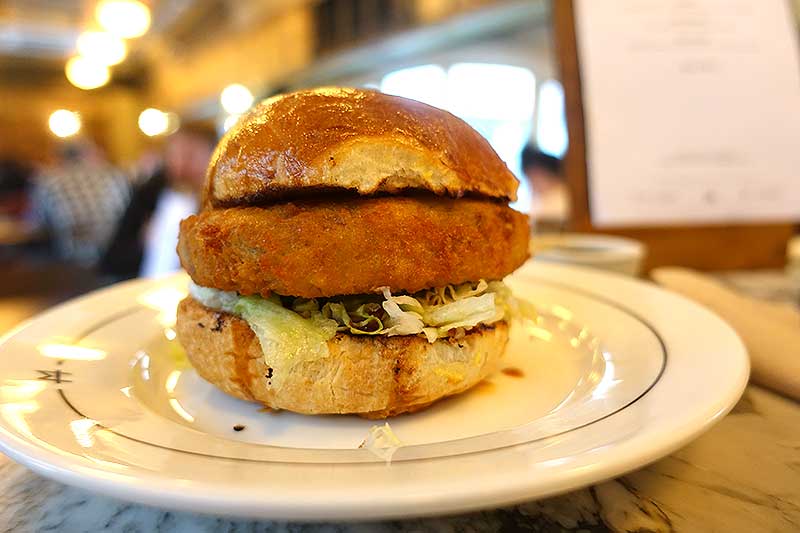 Who: Flank
What: Nose-to-tail-eating. Originally from Brighton, this is their second outpost after Spitalfields market.
What we had: The piggy bun - described as a pork nugget with apple jam and chilli ketchup. Pimped up with gravy (start eating and pour the gravy inside the nugget. SO GOOD),
Also try: New to Victoria, Hunters Chicken serves with their bacon and whipped mash (£9). And the beef shin dumpling (£8) sounds pretty epic too. 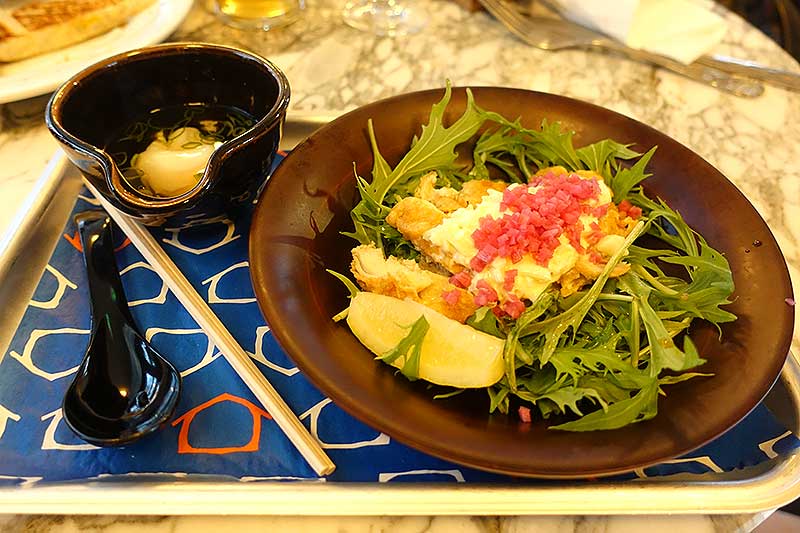 Who: Koya Ko
What: Udon noodles and a lot more from one of London's much-loved institutions.
What we had: While almost everyone around us was going for the atsu atsu or hirashi we wanted to try two of the new dishes appearing here which were the nanban chicken (£7.90) topped with tartare sauce and pickles and the poached egg in chilled dashi, both of which we think you're going to want to have. The egg and dashi, in particular, felt like it was actively doing us good while we were eating it.
Also try: The prawn tempura hirashi ten (£10.50). 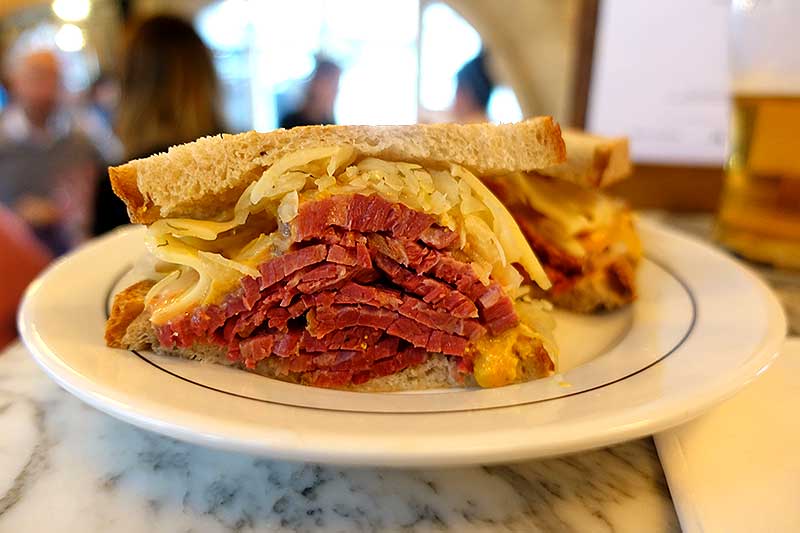 Who: Monty's Deli
What: Jewish soul food from this popular Hoxton Deli.
What we had: One of their signatures - the Reuben (with salt beef - £9.50). Huge sarnie, top class salt beef, a perfect lunchtime snack.
Also try: Their brunch buns sound well worth a look - particularly the pastrami, egg and cheese (£6.50). Just what you need after a long commute in. 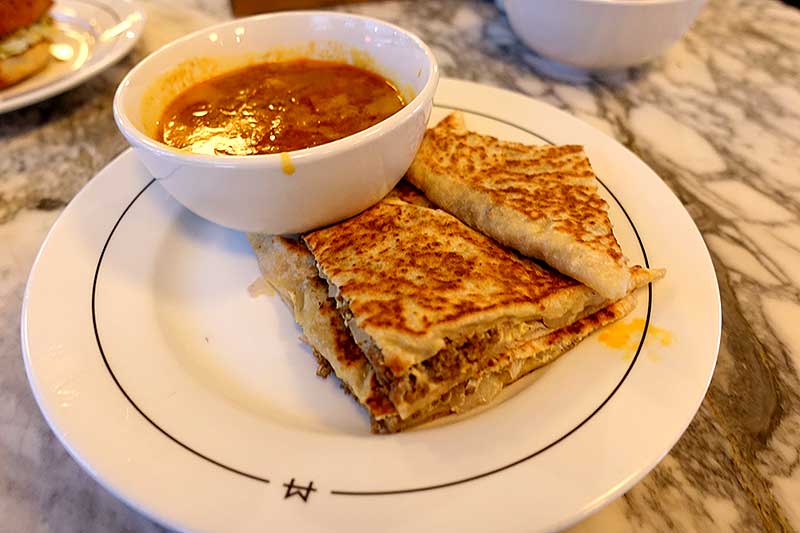 Who: Gopal's Corner
What: Malaysian restaurant Roti King has built up a big reputation at their original King's Cross outpost. This sees owner Sugen Gopal get his name up front with their signature rotis.
What we had: The Murtabek (essentially a filled roti (we chose beef - £6.95). We haven't been to the original, but now we see what all the fuss is about.
Also try: The signature Roti Canai, with either dhall, chicken, mutton, fish or beef rendang. 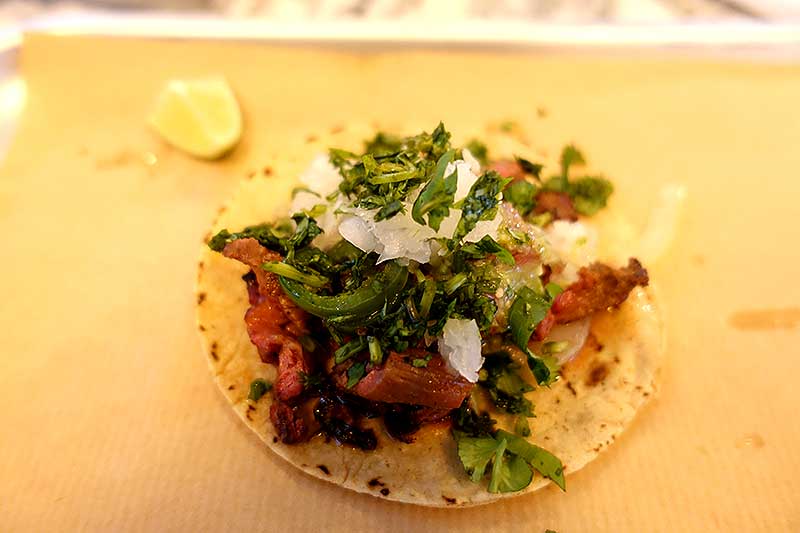 Who: Super Tacos
What: This is from the same people who came up with Breddos, so expect tacos, burritos, enchiladas and more.
What we had: Carne Asada (£3.50)  which is charcoal grilled marinated skirt steak topped with roasted jalapeno, white onion and salsa habanera. We were really trying to have a go at everything which is why we only had one of these lovely tacos. Next time round we'll go for a three taco plate with black beans and salsa for £11.
Also try: Chicharron and guacamole (£6). 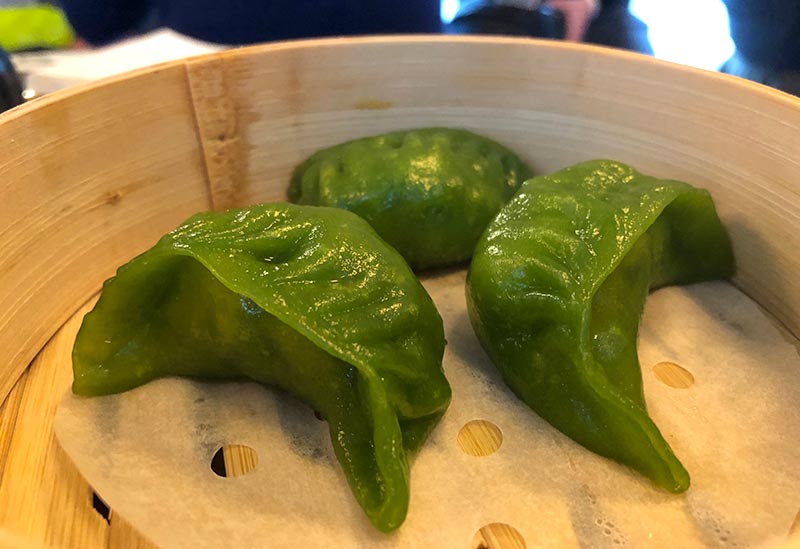 Who: Baozi Inn
What: Northern Chinese street food restaurant famed for its Cantonese fusion dim sum
What we had: The prawn and chive dumplings in spinach sauce dough (£4.80) - super dumplings, but eat them the minute you get them as they stick like buggery given half a chance.
Also try: Lots of people say their sesame prawn brioche is amazing, so that'll be on our to-try list next time. 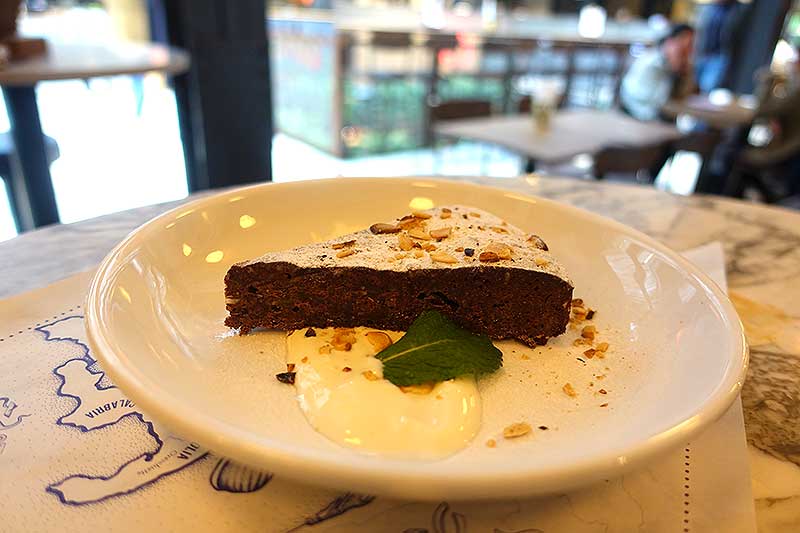 Who: Nonna Tonda
What: They previously had a residency in Bar termini and now they're serving handmade pasta in Victoria
What we had: At this point, it was time for dessert so we went for the Torta Caprese with Creme Fraiche and pistacios.
Also try: We're hearing good things about their Cacio e Pepe (£8)

And there's even more?

Yes, even we can't get through all eleven traders in one lunchtime - but that doesn't mean you should miss out. Also on offer is:

One thing we'd have liked to try (although it may simply not be as popular as other dishes) is a few more dessert options (like the churros in Fulham). Hopefully we'll see more of that in the future.

And what's the drink offering?

Of course, you can just come in for a quick drink if you fancy it - and for that, you've got a bar on each floor. There are cocktails, of course (£9.50 each), draft beer (we're fans of the Fable pale ale). There's also a different wine list for each bar, starting from £30 at the downstairs bar (for a Le Coste Trebbiano).

Yes, this place is going to do very nicely indeed. There's a truly eclectic mix of cuisines on offer with some absolute stunners that make the place a must visit (start with Bunshop for sure). And there's more on the horizon - look out for the Oxford Street Market in early 2019.

Where is it? Terminus Pl, Victoria, London