[SIGPLUS_EXCEPTION_SOURCE] Image source is expected to be a full URL or a path relative to the image base folder specified in the back-end but /blog/2014/tredwells-test/gallery/ is neither a URL nor a relative path to an existing file or folder.
0
Shares 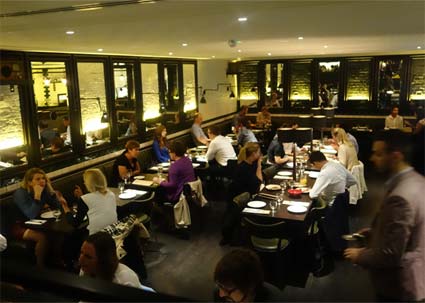 What can you tell us about Tredwell's?

It's the latest from Marcus Wareing, but this also marks a departure for him - as his involvement is more as a restaurateur while he focuses on Marcus at the Berkeley. Heading things up at Tredwell's is the Group's Operations Director Chantelle Nicholson, while in the kitchen is head chef Andrew Ward, who's previously worked at Chez Bruce and La Trompette. The aim is to match British cuisine with international flavours, something we think they've pulled off pretty well.

Right in the heart of Theatreland, on Upper St Martins Lane, a few steps from Leicester Square station and just opposite Dishoom.

Oh, and the name comes from the butler in Agatha Christie’s novel, "The Seven Dials Mystery" (a nod to the Seven Dials location).

Where can I meet for a drink?

There's a holding bar in the basement as well as counter dining upstairs. It's well worth turning up for one of their cocktails, all twists on old favourites like the New Fashioned (rye whiskey, marmalade, bitters - £9) or the Sider-cart (apple cider brandy, kummel, fig lemon - £7.50). Alternatively, there's the Ape and Bird just around the corner which is probably the best option nearby.

And who's it suitable for?

Given its location, Tredwell's will certainly be a big draw for nearby theatregoers (we're waiting to see if there's a specific pre-theatre offering). But with the quality of food on offer here, we think it'll be a draw for Wareing's fans too - particularly those whose budgets are constrained.

While we were sat in the basement (which has the advantage of being close to the kitchen) we think the best seats are on the upper mezzanine floor which overlooks Upper St Martin's Lane through the huge front windows. Get a table up there if you can and we'd also recommend the bar on the ground floor for counter dining and the decent-sized terrace too (if the weather holds).

The menu is divided into multiple sections (pots, bread & buns, grills & smokes, snacks & more) but one thing sticks out immediately - almost the entire menu is available in small or large sizes. That really allows you to roam around the menu, or settle for fewer dishes which are a bit more substantial. We went for the small plate approach, which we felt was definitely the way to go, not least because the menu was packed with things we felt we had to try. And once we sampled what the kitchen had to offer, we knew we had to go back for more. Food is brought out "as it's made" to order, which may irritate some. If it does, order in batches yourself as and when you want it.

We've already mentioned how Tredwell's is looking to match British food with global flavours and it's quite natural to treat that aim with a little suspicion. But as the food arrived from the kitchen, it became very clear that Tredwell's is really achieving its goal in a way that adds something new to the London dining scene. In the same way that New York's new Dirty French matches French cuisine with something a little more global, this restaurant feels like doing the same and is also bringing something new to the small plates scene in the UK.

Of the food we tried (and we tried a LOT as you can see from the gallery below) there were a few standout winners that you're just going to have to order:

And finally it's worth pointing out the soft serve of the day (£5). This comes in a striking goblet and had some of the best salted caramel ice cream we've had (and we've even made our own). If that's the flavour of the day, then go for it.

Reputation-wise, there was a lot riding for Wareing on Tredwell's. Could he serve up the kind of successful formula that  say Jason Atherton has demonstrated with his restaurant empire? The answer is a categoric yes. Wareing, Nicholson and Ward are a dream team that have taken the time to get their casual dining restaurant just right. This works as both a great new addition to theatergoers while also offering something new for Londoners in general. It shows a particularly deft hand in a new area for Wareing and one that deserves to be a success. Highly recommended.

Tredwell's is at 4A Upper St Martin's Lane, London, WC2H 9NY. For more information, follow them on Twitter.

Hot Dinners were invited to Tredwell's during its soft launch period. Prices were correct at time of writing.