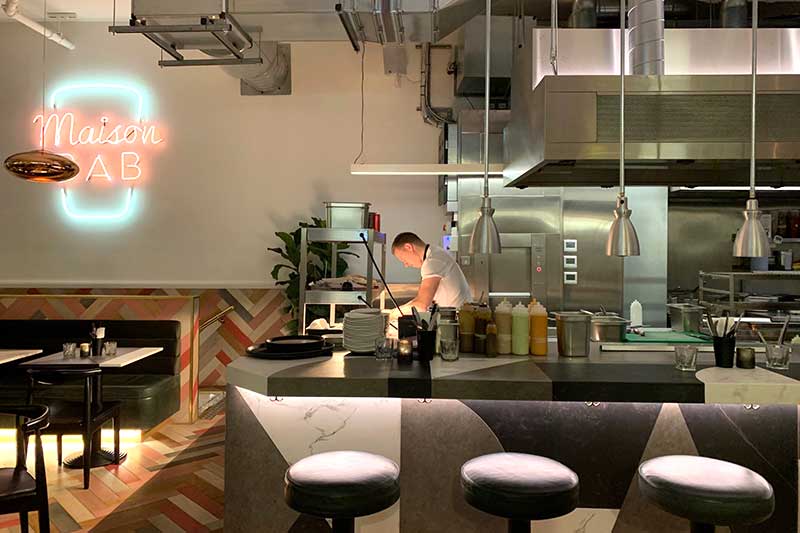 The dining room at Maison Bab

So what do we need to know about Maison Bab?

It's the second restaurant from Stephen Tozer and Ed Brunet, the duo responsible for Soho's Le Bab. They say they're inspired by and are paying homage to great kebab houses. In the kitchen is Angus Bell, formerly of Le Gavroche and The Star at Harome. So think next level kebabs. There's also a yet-to-open downstairs chef's table called Kebab Queen which is worth looking out for.

It's a little off the main drag in Covent Garden in the newish Mercer Walk development. The easiest way to get to it is down Mercer Street - it's on the corner of that and Mercer Walk. And if you know where Temper is - it's right opposite that.

There's the nearby Hawksmoor Seven Dials which is always handy for cocktails. Or, if it's a decent glass of wine you're after, maybe Della Terra just across the road in St Martin's Courtyard would do the trick.

We liked the booth tables by the window best - so head for that if you can.

In addition to the usual snacks, starters, sides and salads, the mains are split into kebabs served in their own flatbreads, or with other breads. Here's what we had: 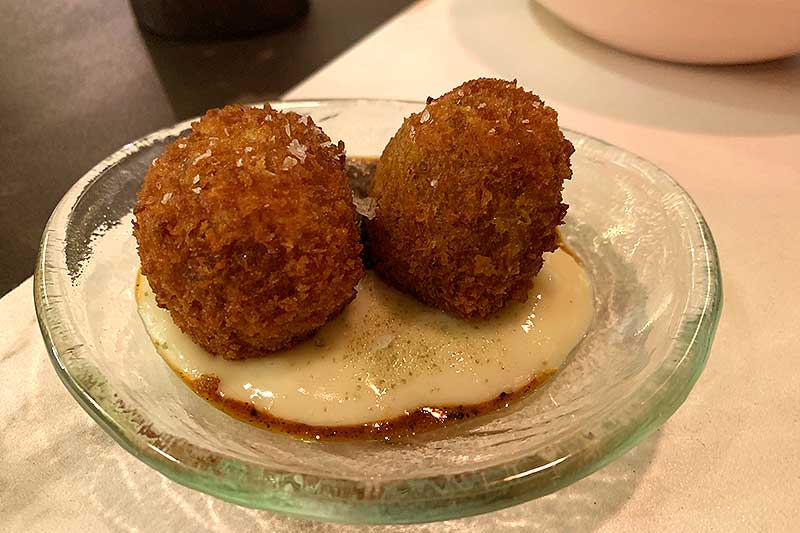 Doner beignets - essentially a doner kebab in croquetas form, so filled with crispy fried lamb and beef and served up with chilli sauce and garlic sauce. £2 for one. You're going to need several of them. 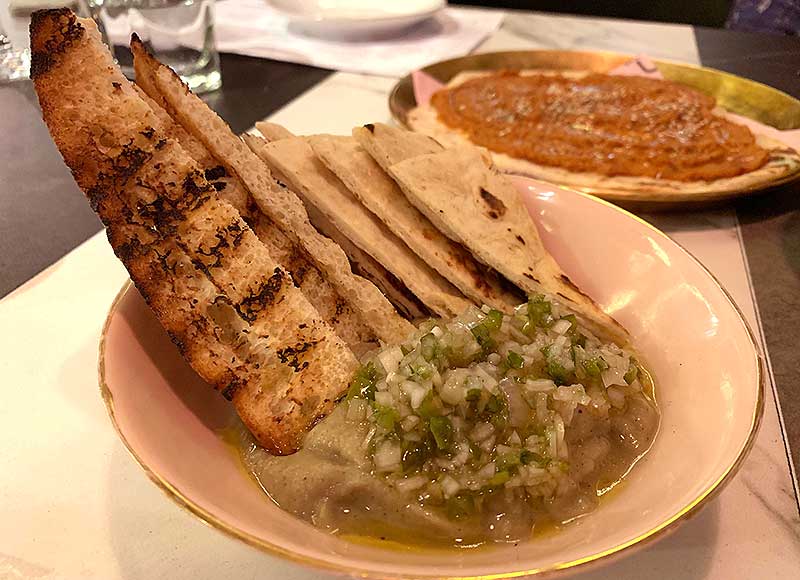 Babaganoush with white miso and white balsamic - a nice update to this delicately smoky classic (£4.50). 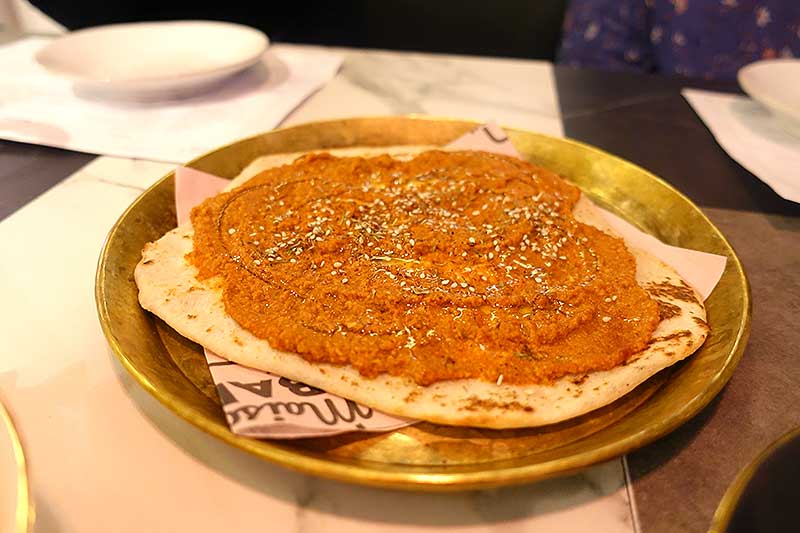 There are two saucy naans to choose from. As we were with a vegetarian, we skipped on the one with meat butter and went for this Iskender Marinara instead, topped in their intensely rich tomato sauce.  (£4.50) 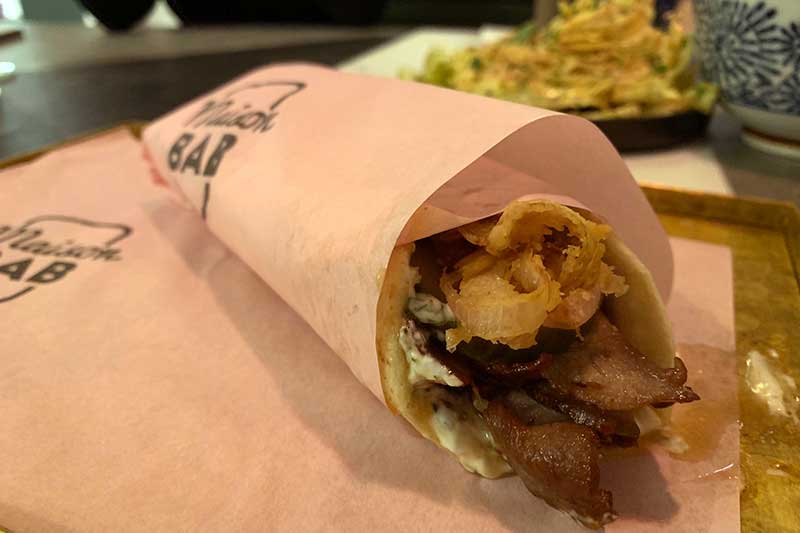 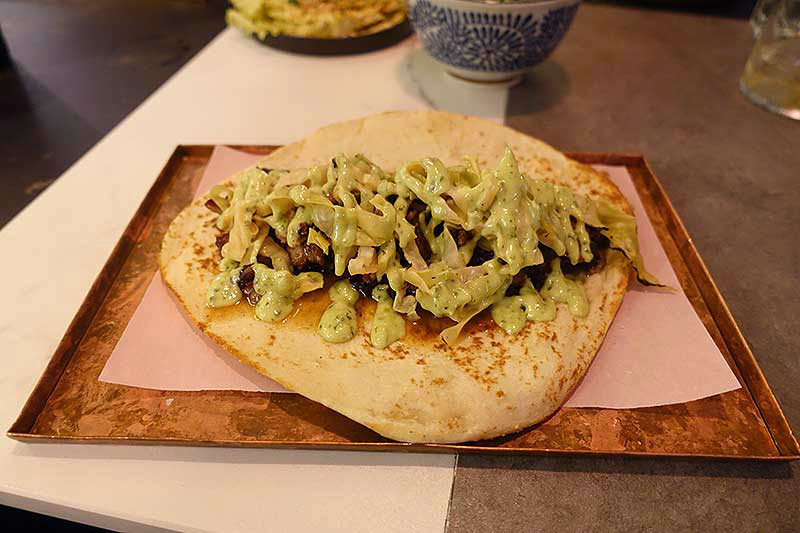 Obviously, we had to have the 15-hour pork shawarma (£9.50), which is charcoal grilled after that long slow cook and then wrapped with burnt pickled cabbage and loads of chermoula mayo. Messy but wonderful. So maybe a second or third date order.

The vegetarian dining companion had plenty to choose from and said her vegetarian Maison Sabich (which can also be made as a vegan main) was wonderful - featuring house-smoked aubergine with a yoghurt, chilli peanuts, shallots and parsley dressing (£8.50). There was also another main - the Vada Pav which could be served up as veggie or vegan which is a Mumbai sandwich with a deep fried masala potato cake.

A short list of cocktails range in price from £9-£10 and were really well made - our Rothco with Cointreau Blood Orange, Buffalo Trace Bourbon and artichoke Cynar was the business. There's also a nice selection of wines by the glass. Our choice of a Puglian Fiano (£6 a glass, £28 for the bottle) was just what we were after. 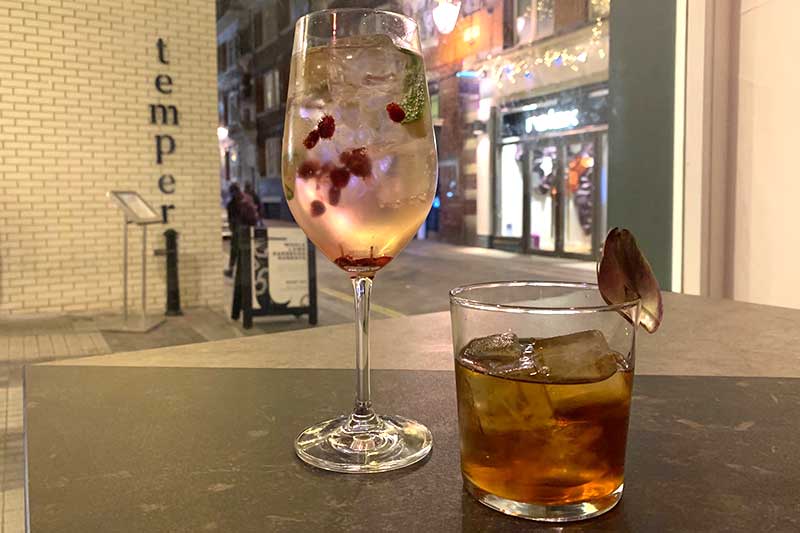 One of their special G&Ts (left) and the Rothco on the right.

Thoughtful, inventive and incredibly tasty - the food here at Maison Bab really sums up the best of the London food scene in 2018. The room's lovely too - the perfect place to catch up and have a decent natter with your mates over good food.

Where is it? Mercers Walk, Covent Garden

How to book: Book online at www.eatlebab.com