Test Driving Lorne: a calm oasis in the streets around Victoria station 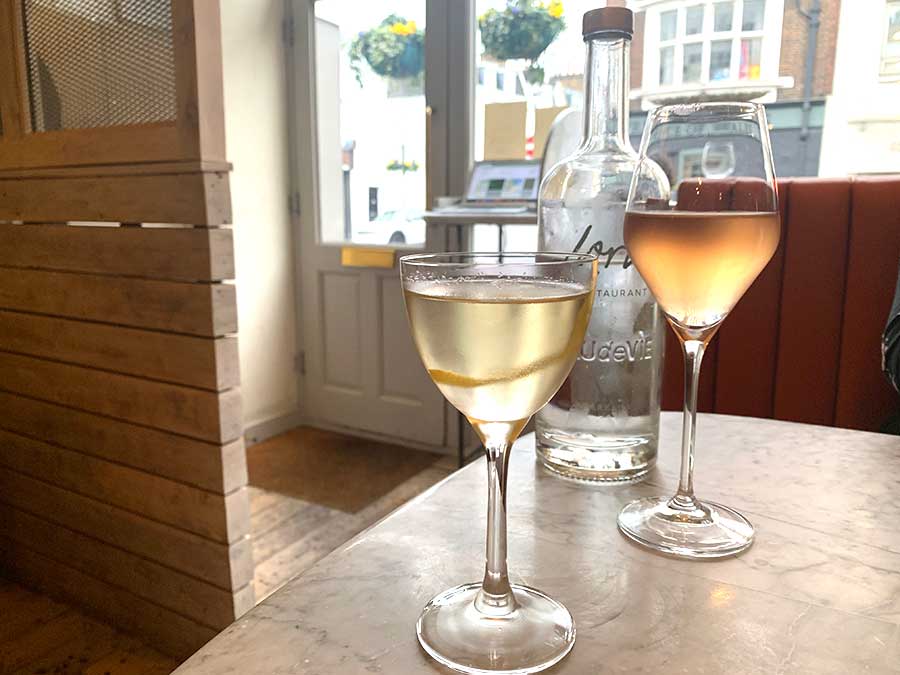 We kicked off dinner with a glass of top English sparkling wine and their own Vesper 180, featuring lillet, gin, triple sec and grapefruit bitters in it, infused with grapefruit rind for 24 hours.

So what do we need to know about Lorne?

This neighbourhood restaurant has quite the stellar team behind it. Katie Exton was Head Sommelier at The River Cafe and Chez Bruce and chef Peter Hall comes here via The Square (where he first met Katie) and Brawn, among others. When they decided to open their own place, such was the buzz around it that both Philip Howard and Clive Watson have put money into it.

They've been open since early 2017, but had to close for nearly three months last year after a catastrophic flood. They're firmly back in business now and even on a Tuesday evening during the Easter holidays the place was almost full for dinner.

Tucked away behind Victoria station on Wilton Road - just a few doors down from A Wong.

The bar at Tozi does a cracking barrel-aged Negroni or the nearby Queen's Arms has a decent selection of London beers on draught. 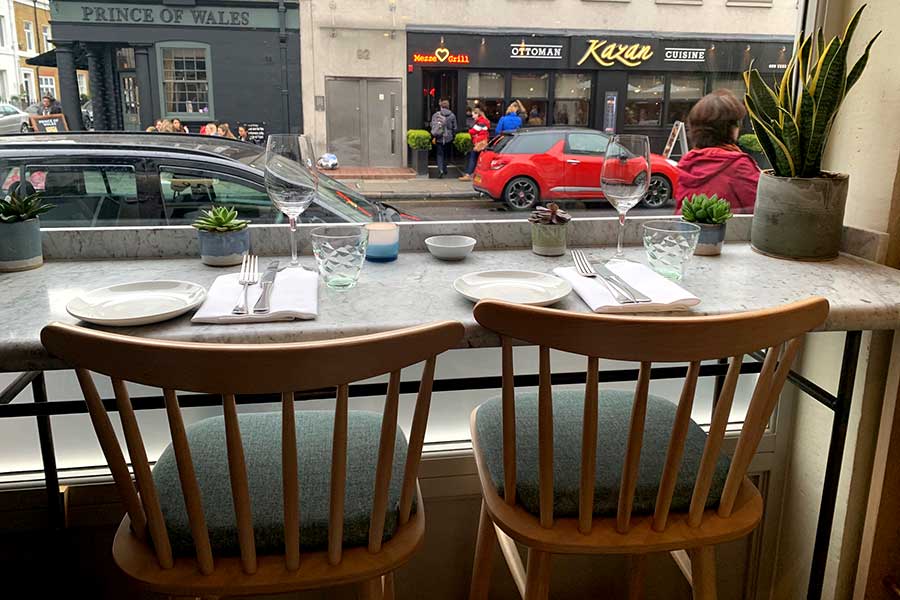 The perfect two-person spot for a bit of people watching

The redesign following the flooding means that they were able to put in a series of lovely two-seater booths at the front of the restaurant which is where we were. But the back dining room is also full of light and a super place to sit. Alternatively, grab one of the stools at the front overlooking the street and watch the world go by.

Expect a traditional starter, main course and dessert format - in itself a bit of a novelty nowadays. It changes monthly and here's what we had on the night: 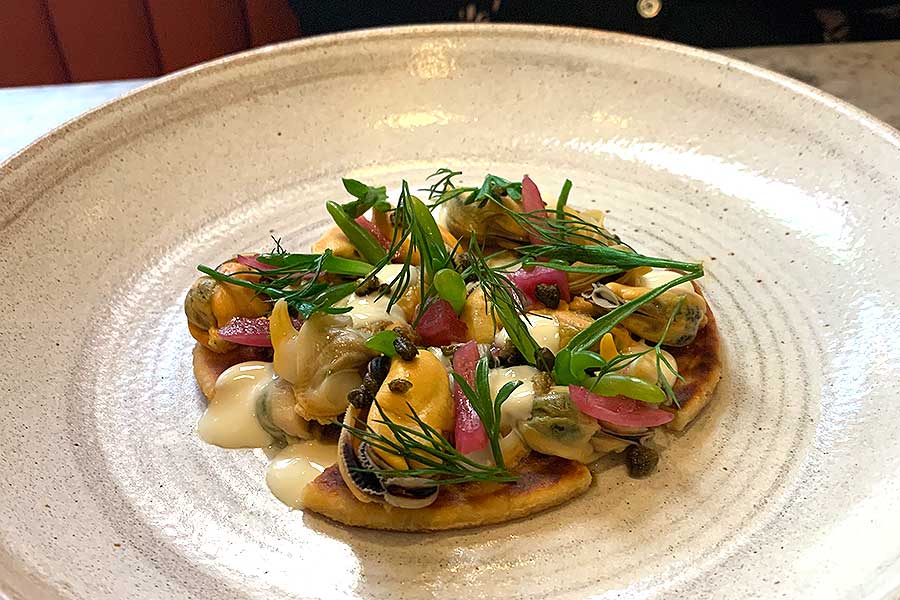 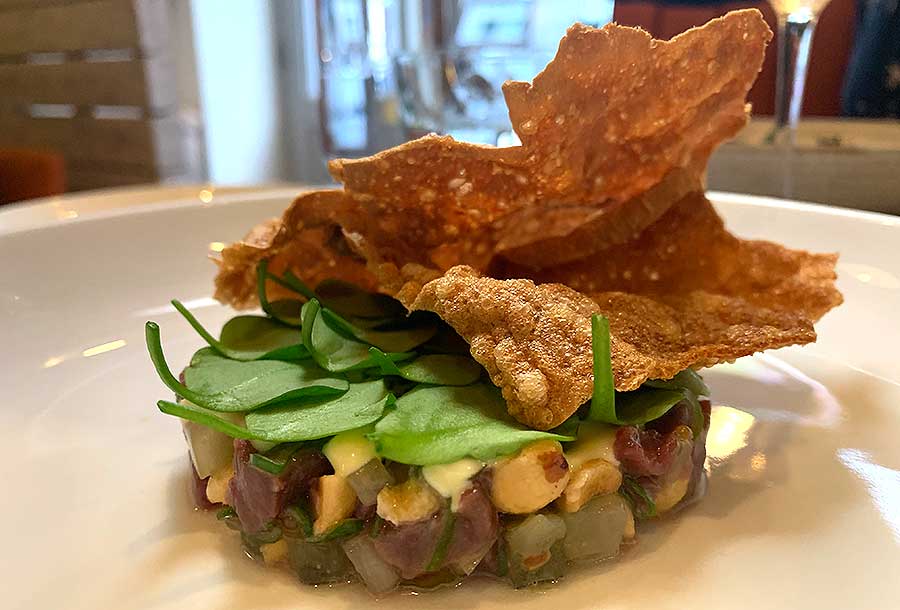 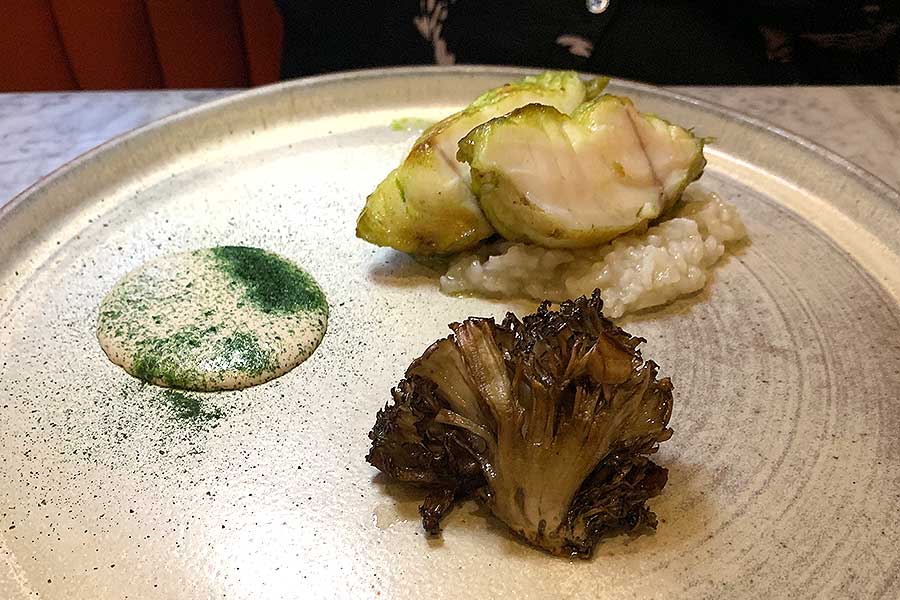 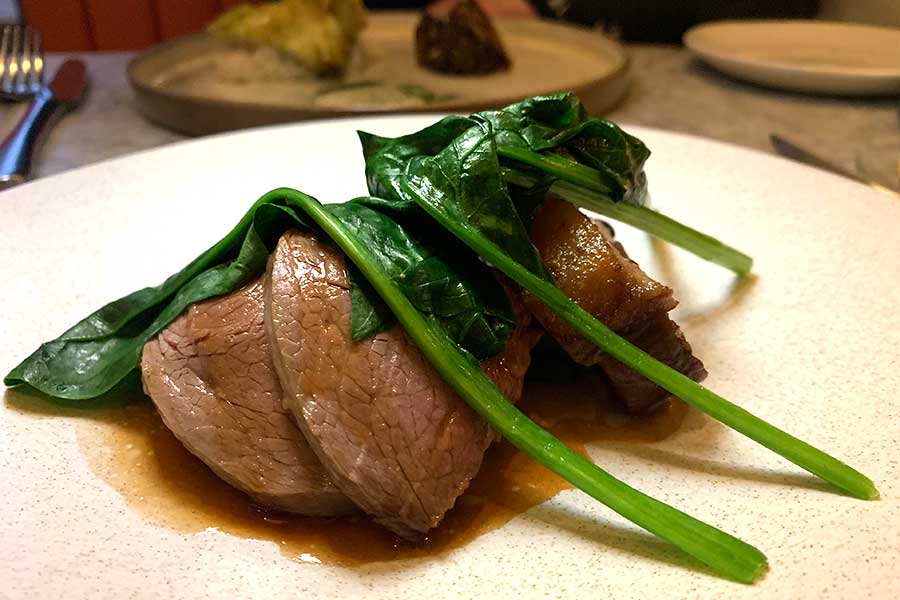 Hogget (year old lamb) from Richard Vaughan's Huntsham Court Farm in Ross on Wye - served with braised cabbage and sea beets. And on the side is... 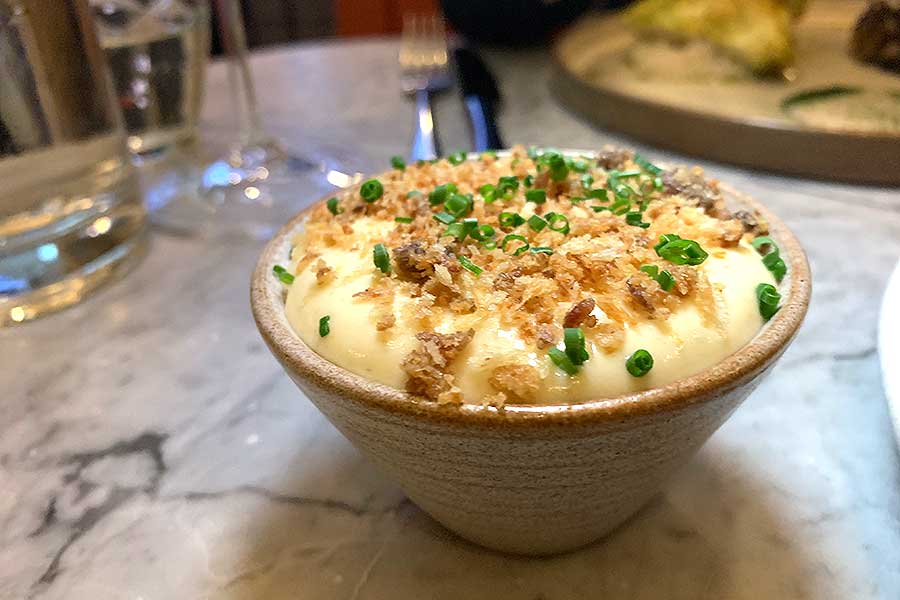 ...a teeny (and utterly delicious) serving of shepherd's pie.

We loved the idea of their Brillat Savarin pannacotta served with candied walnut, grapes and apple sorbet (£7) (see picture below) so much we had it French-style as a cheese course. 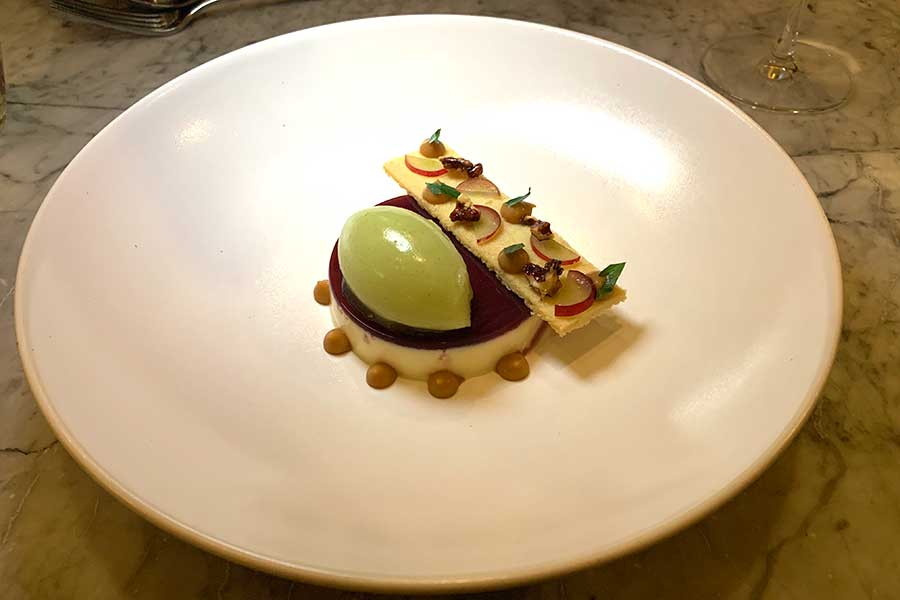 We then followed that with desserts... 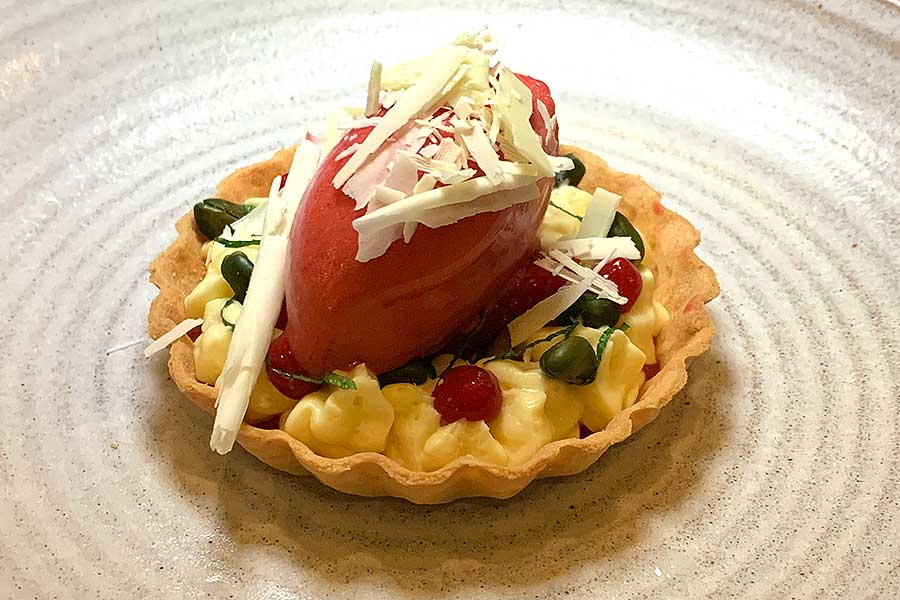 Gariguette strawberry tart with white chocolate and pistachio (£7.50) - just LOOK at how thin that pastry is. 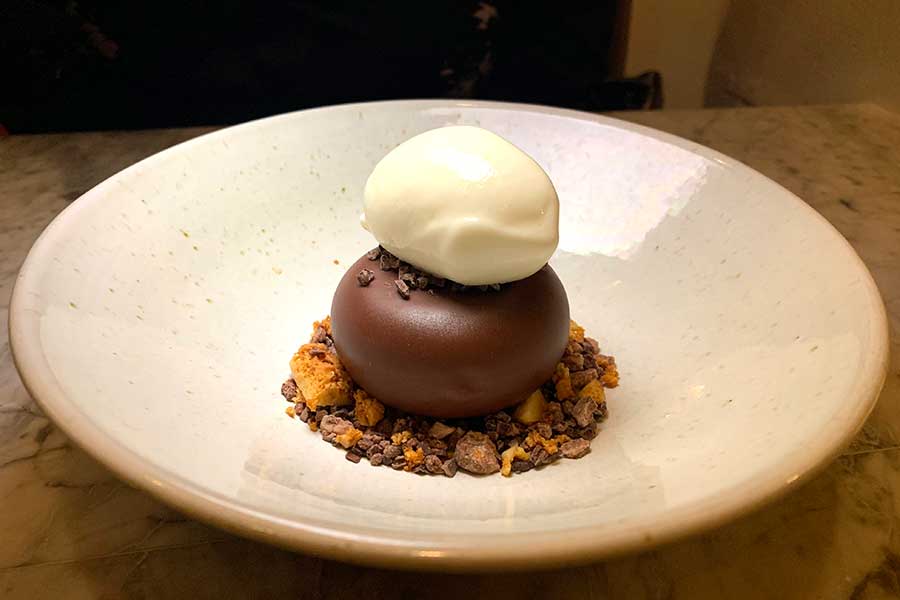 Malted barley mousse, with chocolate and milk ice-cream (£8) - their take on a Malteser and totally delicious

Given Katie's background, you'd expect the drinks offering here to be particularly good and you'd be right. There's a decent selection by the glass and carafe kicking off at just £4.50 for a Vermentino or Corbières. We had a super glass of Coates and Seeley rosé to start - along with Lorne's version of a Vesper. We think you'll definitely have a better experience if you're up for letting them recommend paired wines. GM Charlotte came up with some real crackers.

We've been saying for ages how much we wanted to visit Lorne and, frankly, we were idiots not to have come sooner. Clearly, they're already doing a cracking trade locally and already have a large and loyal following. But this little Victoria restaurant really is worth seeking out.

Hot Dinners dined as guests of Lorne. Prices correct at time of publication.

How to book: Book online at www.lornerestaurant.co.uk