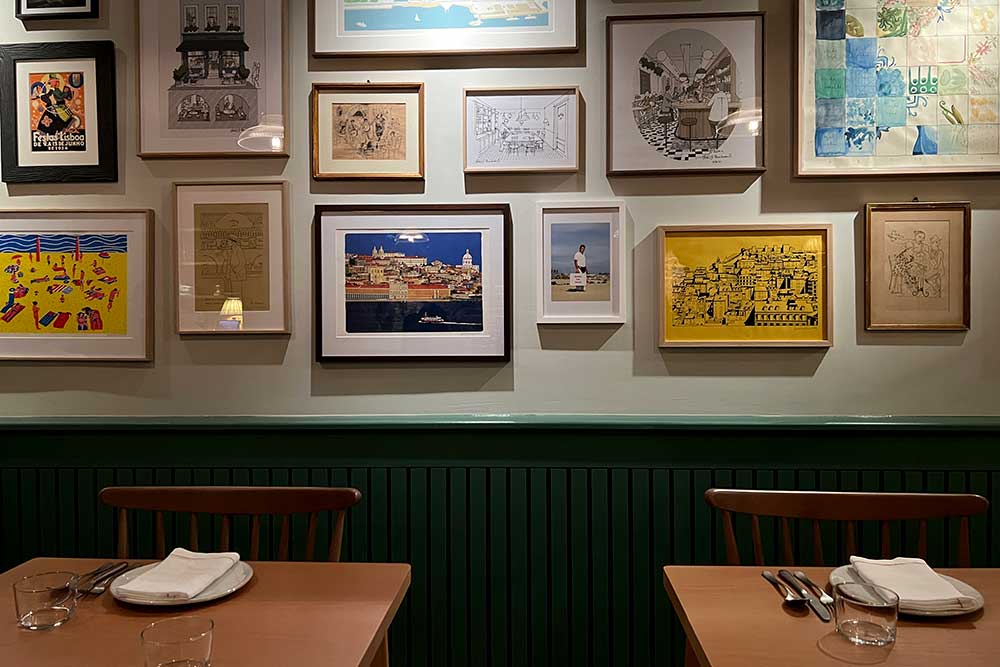 In the front room upstairs at Lisboeta

What can you tell us about Lisboeta?

This is the new restaurant by Nuno Mendes, the Portuguese chef who first came to Londoners' attention when he opened Viajante - something of a real game-changer when it opened (and a little ahead of its time too).

After that, he launched and created the menu for Chiltern Firehouse (coming up with those amazing crab-filled doughnuts), then opened Portuguese restaurant Taberna Do Mercado before launching the recently-closed Maos. Of all those restaurants, Lisboeta is more of an evolution of Taberna Do Mercado than any of them, being billed as a little slice of Lisbon transplanted to Fitzrovia.

Mendes also has a stellar reputation as being one of, if not the, nicest chefs in London hospitality; this combined with his genius in the kitchen have certainly made Lisboeta one to watch,

In the heart of Fitzrovia on Charlotte Sreet, in the building that once upon a time used to be classic French restaurant L'Etoile. 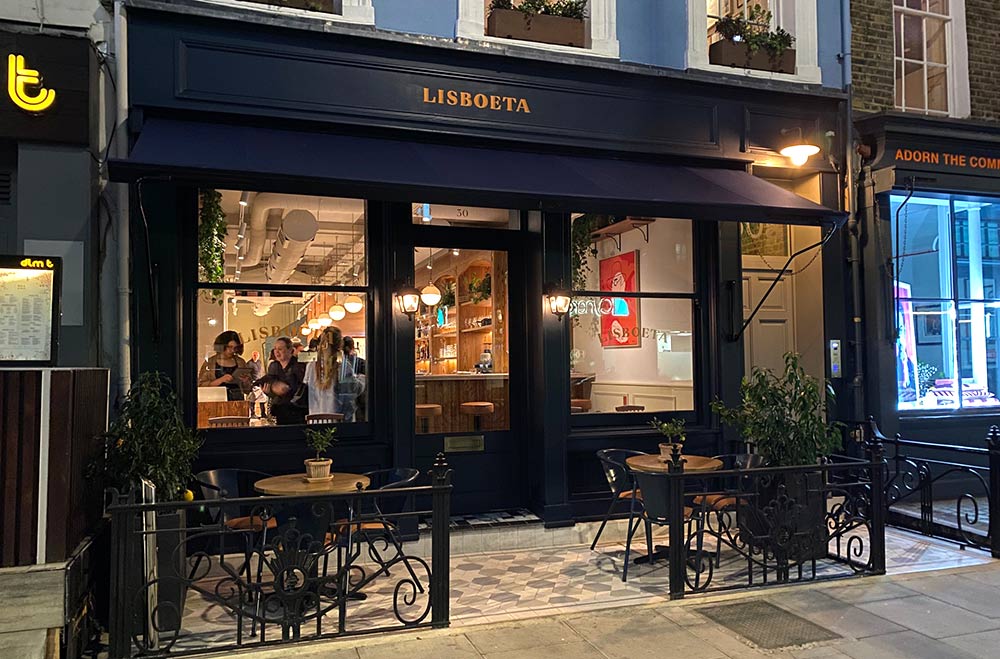 This is what you're looking for.

What's it like inside and where should we sit?

The overall vibe is casual and there are a few very distinct options worth pointing out.

If you want to be close to the action, then a counter seat on the ground floor by the bar is probably your best bet (you're not right in front of the kitchen but right beside it). Upstairs you'll find more traditional seating opening into a larger room at the front of the building looking down on Charlotte Street (probably some of the best tables are here).

Otherwise, there's a big marble table for 8-10 people that's great for groups (see below) and a private room downstairs. 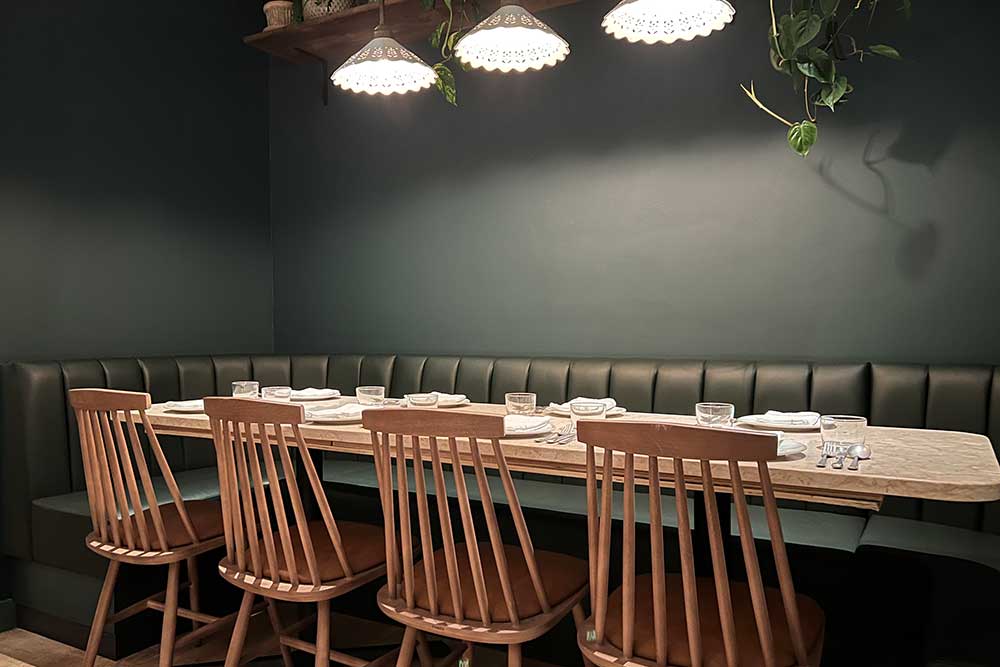 Try and grab yourselves this table if you're in a larger group.

So, what about the food?

As mentioned, this is closer than anything to Mendes' Taberna do Mercado than anything else - but at the same time it's also evolved quite significantly from that restaurant. While the same strong focus on Portuguese cooking remains, we'd say that the edges have been softened somewhat. Taberna definitely challenged in some areas (although we were personally in favour of this) while Lisboeta manages something that's perhaps a lot more crowd-pleasing while still presenting innovative approaches to Portuguese cuisine.

The menu is split into snacks, Petiscos (small plates) and larger "tachos & travessas" sharing dishes. Here's a selection of what we tried. 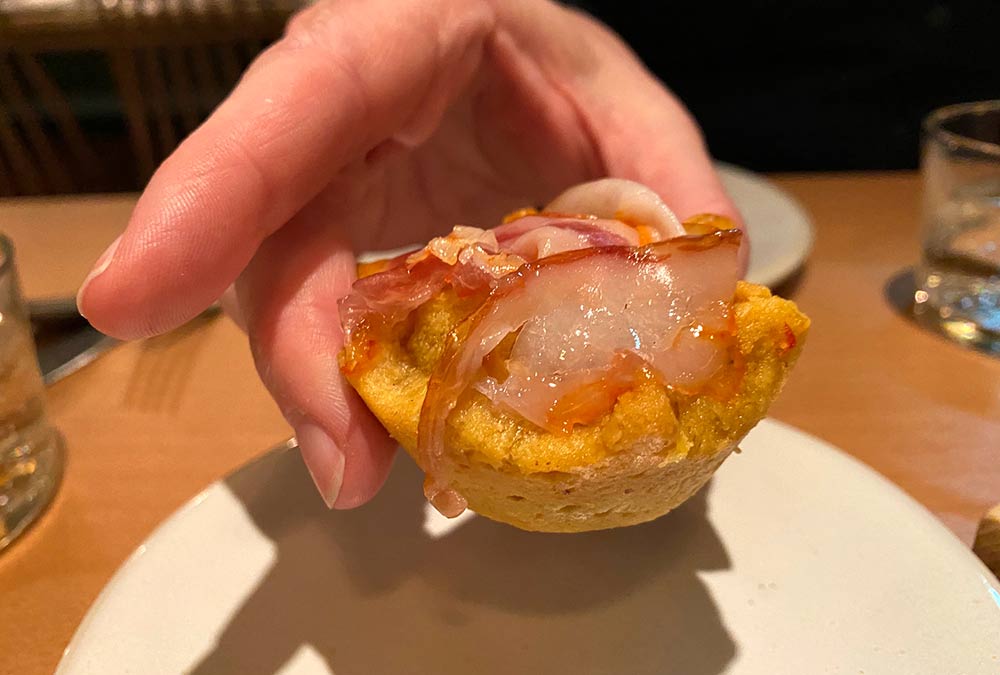 The Vindalho pork pie (£3, so you might as well get one each!). The dough includes pork fat and citrus and inside is a Goan recipe of Portuguese black leg pork with a “secretos” cut (belly) and it's finished off with copita on top. Yes, it IS amazing. 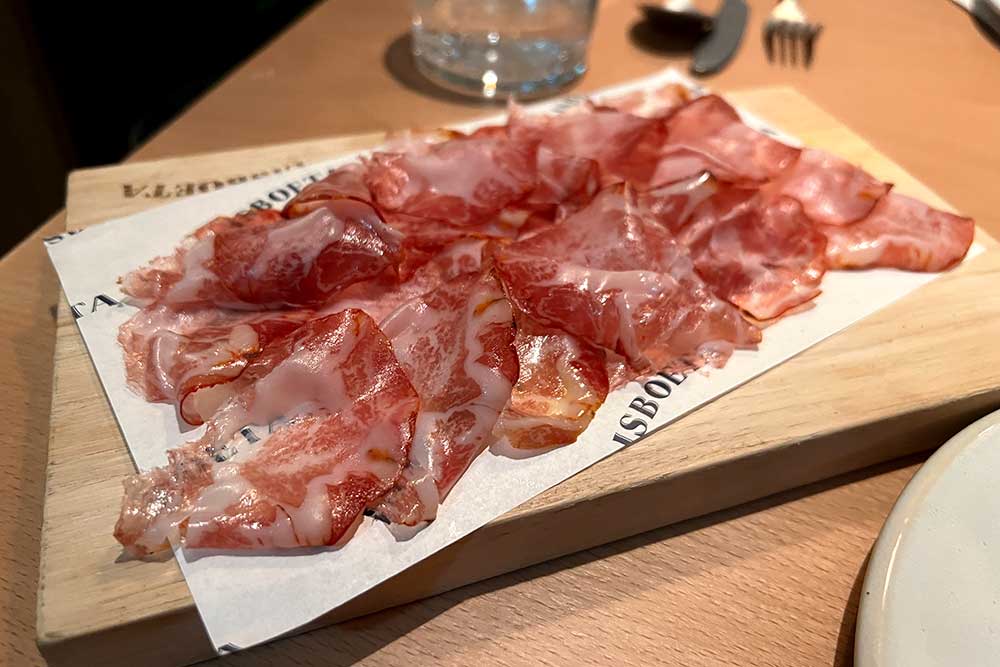 There are a few plates of charcuterie available including this copita, vara negra (£12). It is absolutely wafer-thin and while the expression melts-in-the-mouth may be overused, it's a perfect description here. 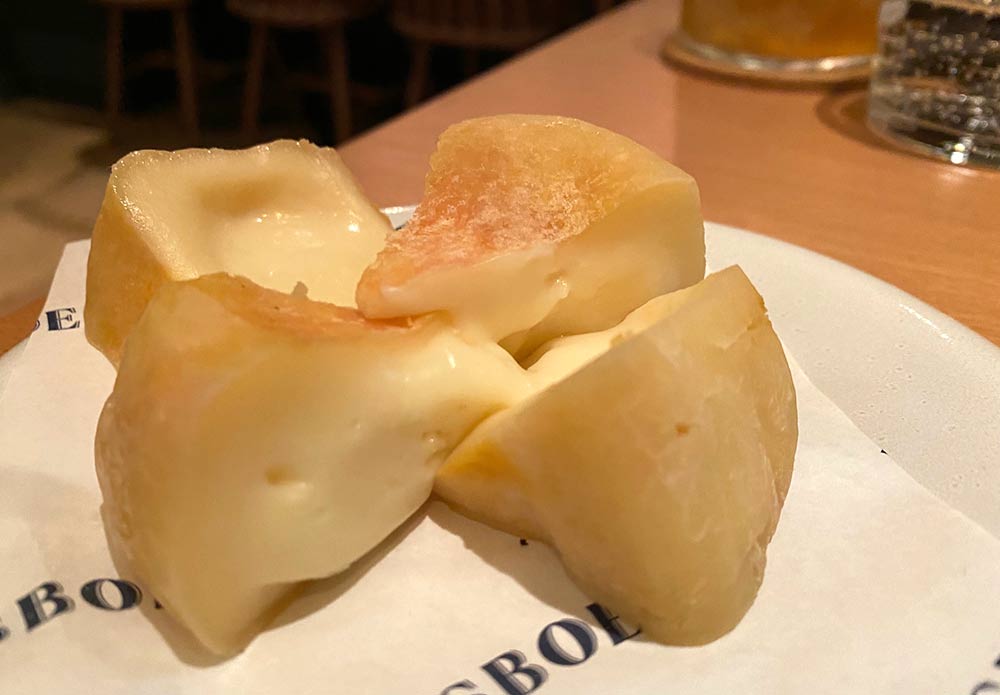 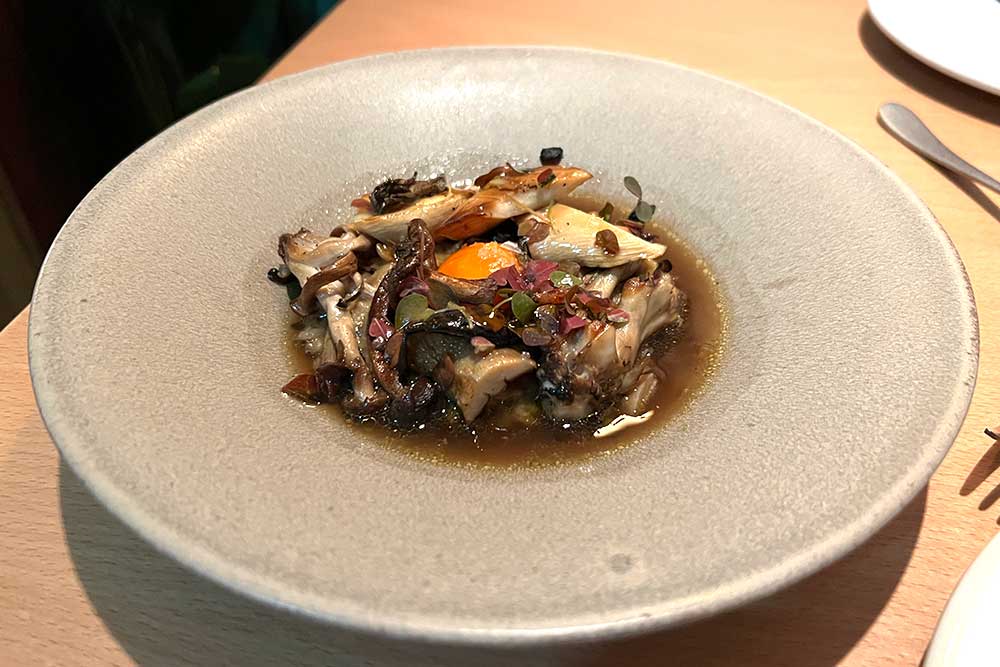 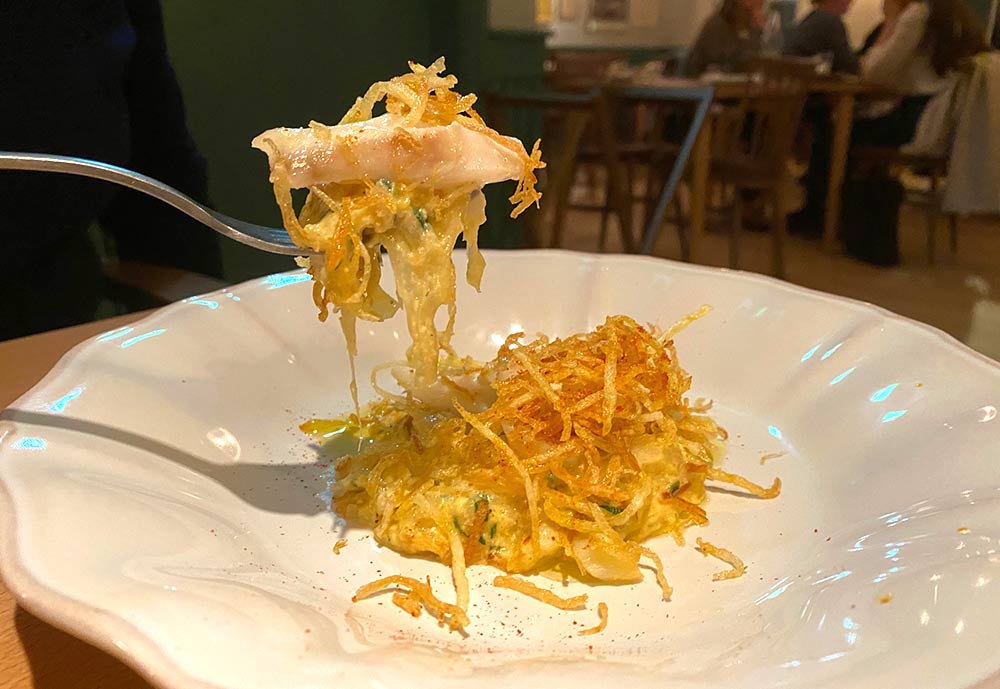 Bacalhau à brás: confit cod, caramelised onions & potatoes (£13) - a dish we love at the best of times and improved even further with the crispy potato covering. 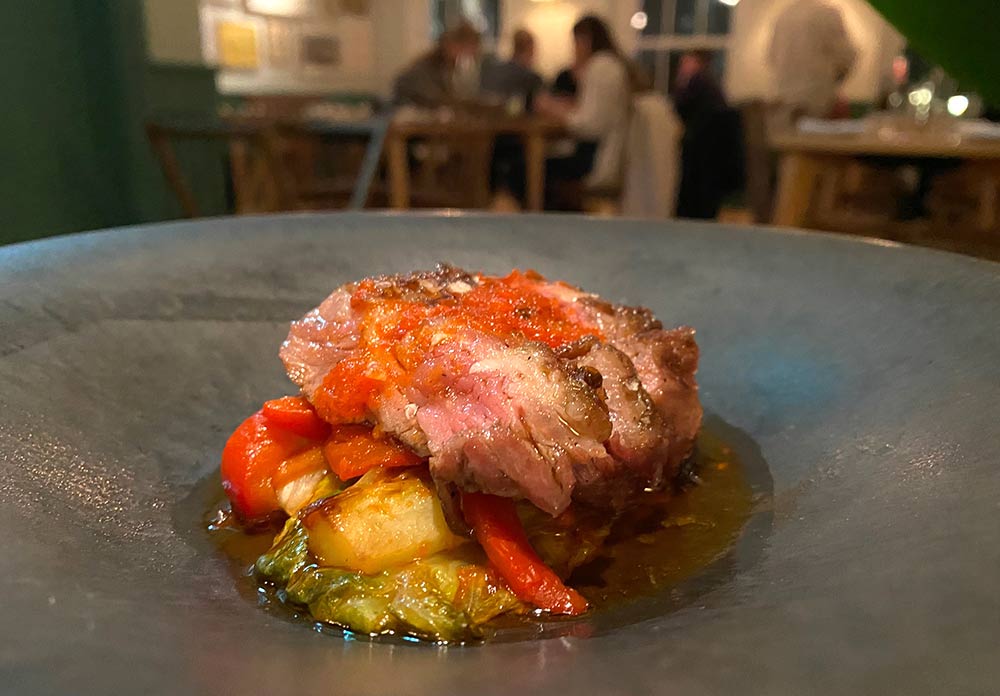 Grilled acorn-fed black pork from the Alentejo with fermented red pepper paste (£17) - you'll be watching your companions like a hawk to make sure everyone gets their fair share of this. 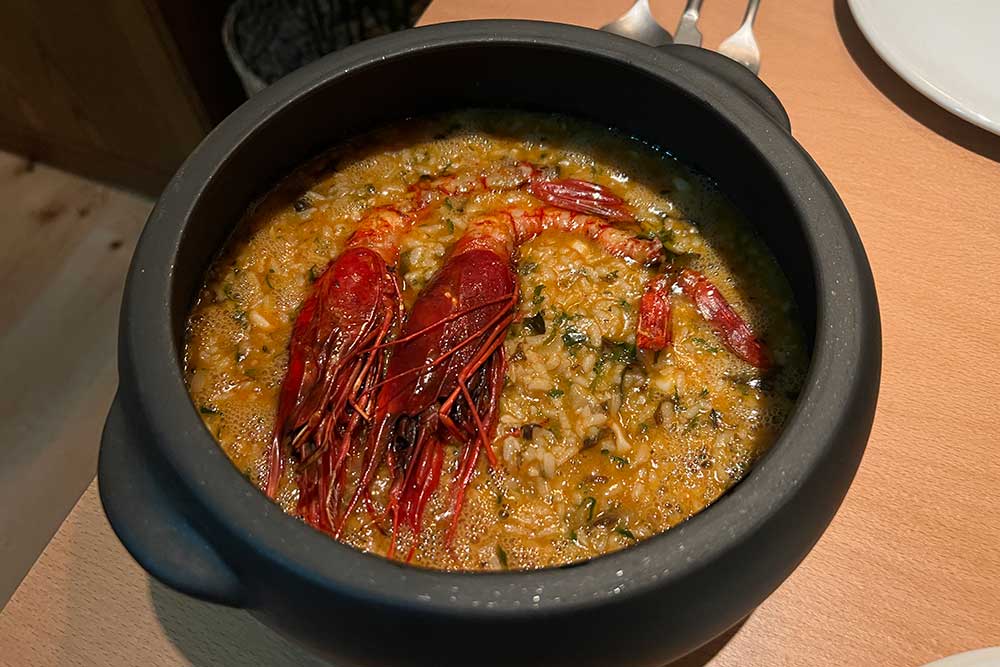 One of the larger sharing dishes, this is the carabineiro prawn and razor clam rice (£49). Easily enough for two with an incredible depth of flavour to the rice and, of course, beautiful prawns. 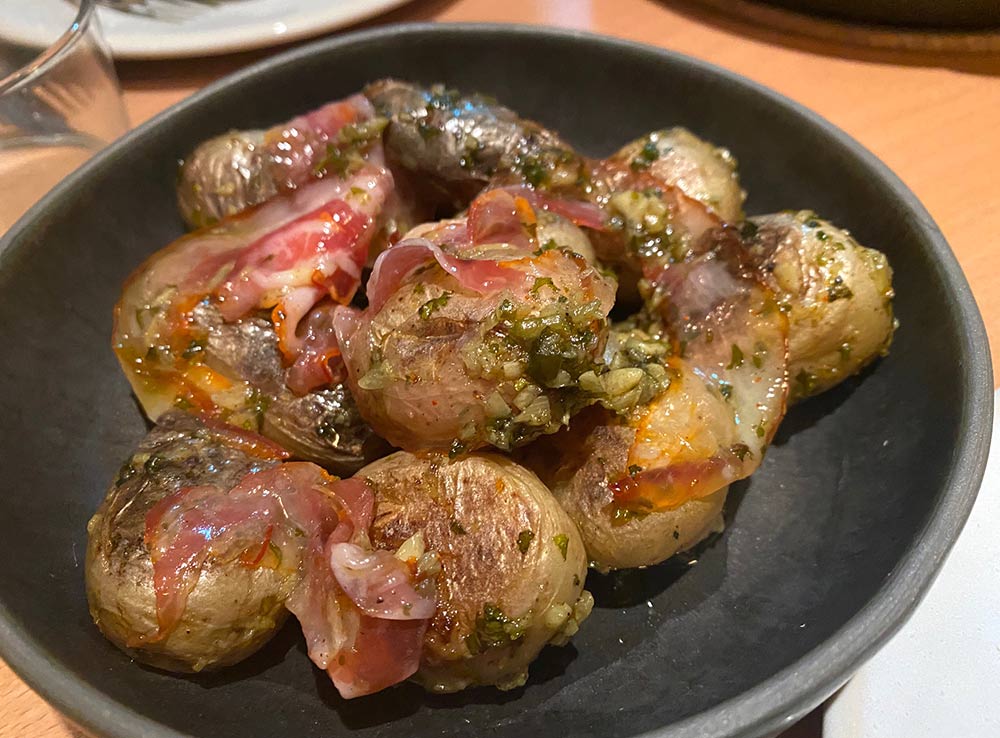 We didn't need a side with the rice dish, but that still didn't stop us double carbing and ordering the Smoked charlotte potatoes with chouriço lard ‘unto’ (£6) - because who could resist smoked potatoes covered in pork?

While there's a lot of pork on the menu, there are plenty of vegetarian (and a couple of vegan dishes here) including grilled asparagus with wild garlic ‘alhada’ sauce (£12) and the larger sharing dish of roasted celeriac and cauliflower in coriander ‘coentrada’ sauce (£36). Not to mention that great mushroom dish above.

It's also worth noting that there are a lot of gluten-free options on the menu too.

You'll definitely want to hold yourselves back for desserts. There are, alas, no custard tarts yet (the ones at Taberna do Mercado remain a high water mark for us) there are two desserts that we don't think you should miss. 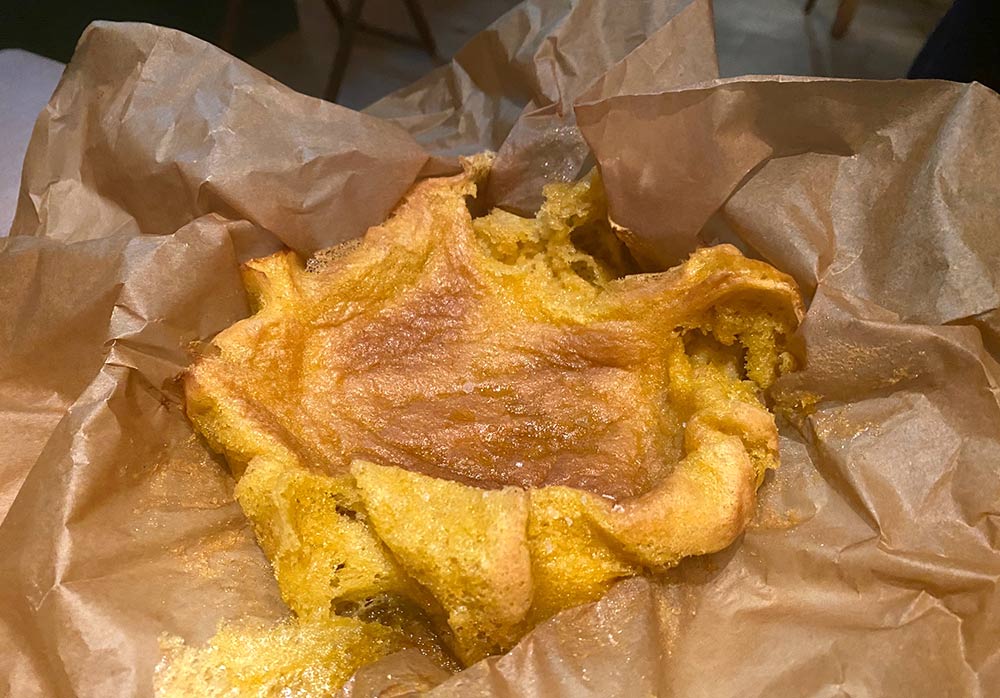 You'll see this being taken to quite a few tables around you - it's clearly very popular. It's the Trás os Montes olive oil cake (£12) that's cooked in the paper, and retains a strong olive oil taste. Good enough for two to share - but you will also want the dessert below... 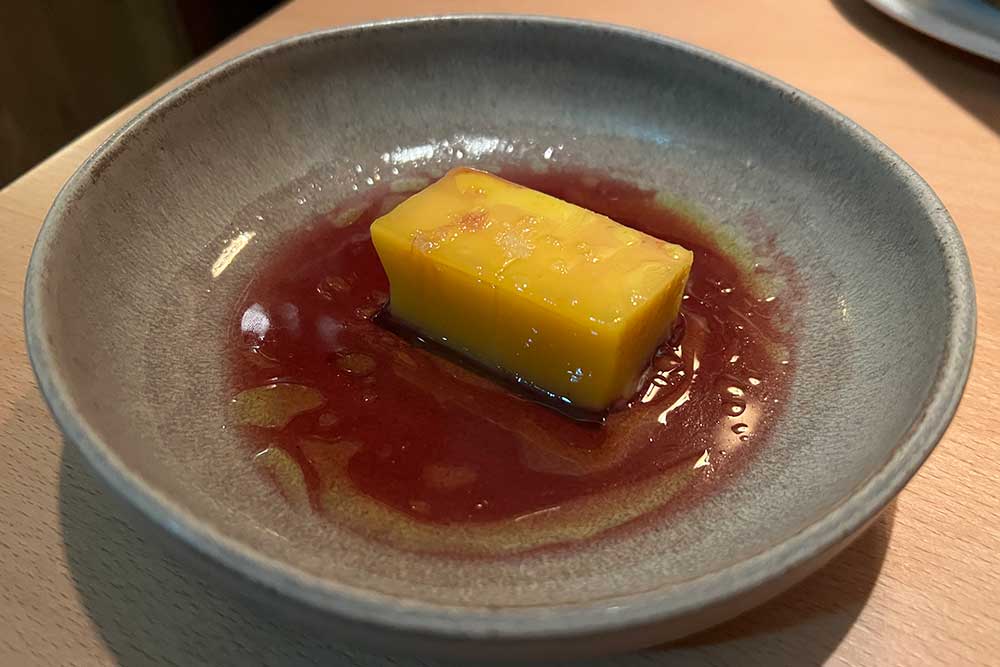 Abade de priscos: set custard, port wine caramel (£6) - this was a dish that really divided people at Taberna do Mercado and they told us it almost didn't make the menu here. Known for including pork in the custard recipe, the version at Lisboeta has clearly been refined so that it's not really detectable other than giving it a salty kick. it was one of our clear favourite dishes of the night and the port caramel is astonishingly good too.

There are a few classic cocktails on the list, including a White Port & Tonic with fig leaf liqueur (£12) and the Entre Amigos (£12) with Madeiran cane sugar rum, brandy and triple sec both of which we kicked off the meal with.

Wines are, naturally, Portuguese and you'll find one of the largest lists of Portuguese wines in the country here. Prices start at £32 for their Lisboeta & Quinta do Montalto house white/red and £36 for the same in rosé. Otherwise you're looking at the late 30s and 40s for most wines on the list or head right to the top for the Barca Velha 2004 from Casa Ferreirinha, Douro for £860. We opted for the Equinócio from Cabeças do Reguengo in Southern Portugal (£76) or £10 by the glass. It's by ballet dancer turned wine maker Joao Afonso.

Lisboeta has undoubtedly been one of our most highly anticipated new openings this year. We've been a fan of everything Nuno Mendes has done up to this point and are very happy to report that this strong streak continues with Lisboeta. He's delivering a menu full of winners and just hugely comforting food - while all the way adding distinct touches of his own. It's well priced throughout, and there's a great buzz throughout the whole restaurant. A hit in the making, we feel.

Hot Dinners ate as guests of Lisboeta. Prices are correct at the time of writing.

Where is it? 30 Charlotte Street, London W1T 2NG