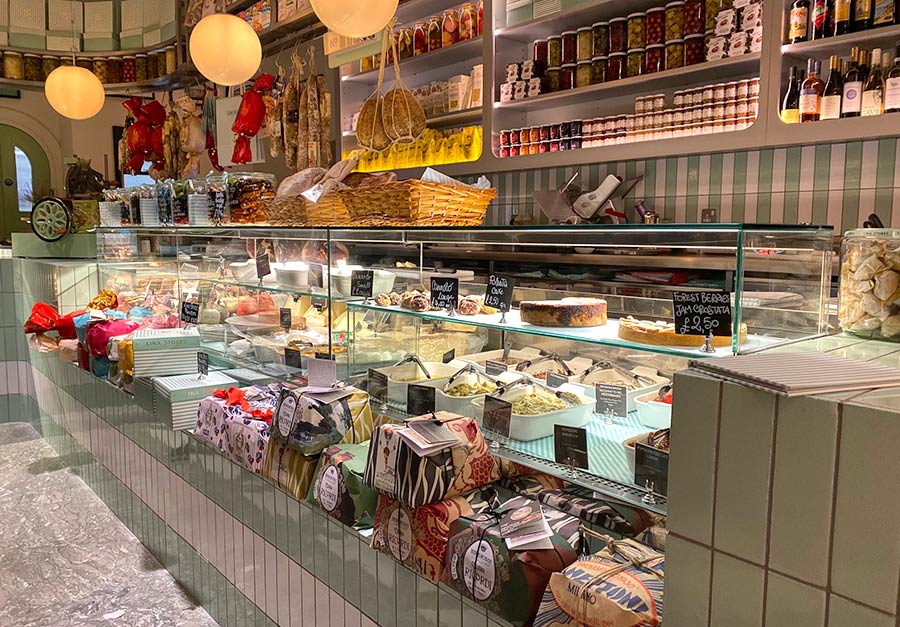 The huge deli in Lina Stores King's Cross - open till late at night. So, so tempting.

What can you tell us about Linas Stores?

Having opened 75 years ago in Soho, the original Lina Stores Italian deli is a true Soho institution. For many years, the deli was their core business but 2018 brought us the very first Lina Stores restaurant on Greek Street, just a few streets away from the deli. This new opening in King's Cross essentially sees the two parts of Lina Stores coming together - it's part-deli, part-restaurant.

Although in King's Cross, it's a fair distance from the station - at least a 10-minute walk. Head up to Granary Square and then you'll find it up past Dishoom.

At lunchtime yes, but not in the evening. It's a large restaurant though, so if it's busy you shouldn't have long to wait.

If we are waiting for a table, where should we go for a drink first?

Although you're away from the main King's Cross area here - there are a few good options nearby. First off, if you fancy a beer, head to the Little Creatures pub and brewery nearby. Or if you fancy some wine, then try Arabica, just across the path. Alternatively, grab a stool at the Lina Stores deli itself - it's a small area but ideal if your table is very nearly ready. There's also a bar right at the back of the restaurant which we almost missed, so if the deli is busy, head for that.

The original Lina Stores restaurant has counter dining upstairs and more traditional seating in the lower ground area. This combines them both in one big corner room that gets plenty of light during the day. If you love a bit of counter dining, then there is a lot of space available. Otherwise, grab anywhere in the main restaurant, with the most sought-after spaces being the two booths for up to six people,

While there are some similarities between the menus of Soho and King's Cross - primarily the pasta - there are also a lot of differences.

The much larger kitchen and restaurant means that they're now more of a fully-fledged Italian restaurant than simply a pasta bar. So the menu is divided into antipasti, pasta, mains (fish and meat) and side dishes (aka contorni). The menu is, alas, missing some of their amazing sandwiches from the Soho restaurant (we're hoping they'll be back on the menu later) but there's plenty more to choose from. 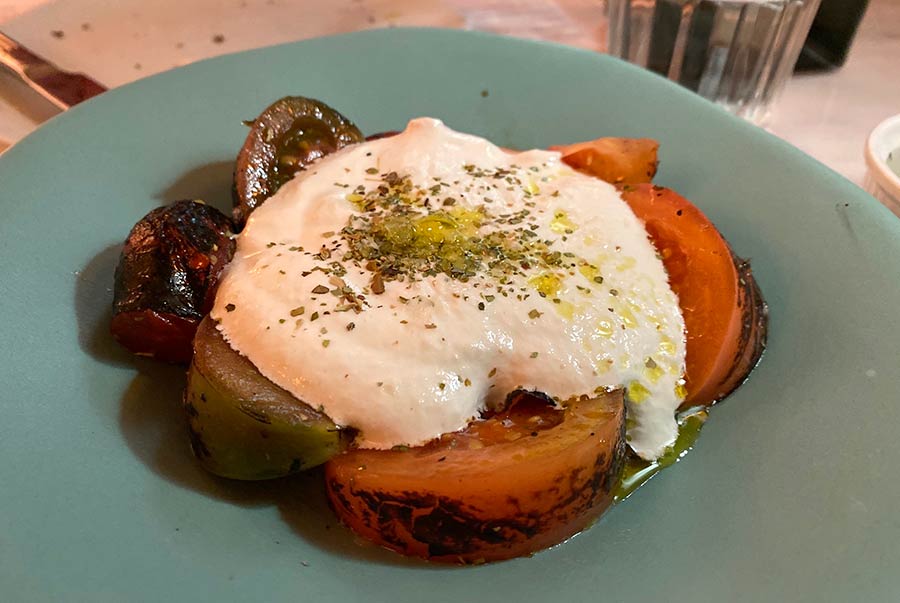 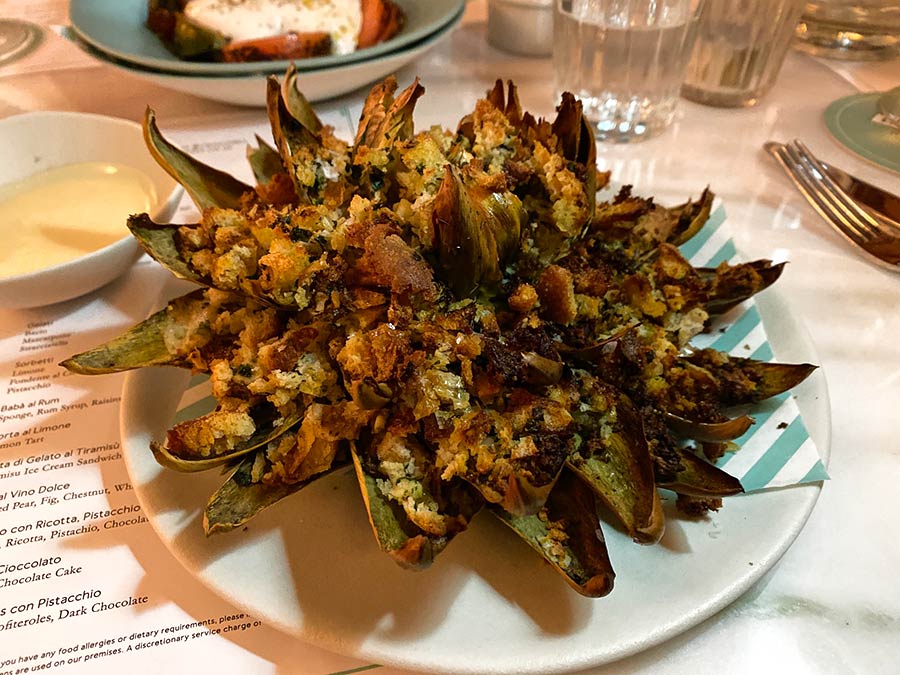 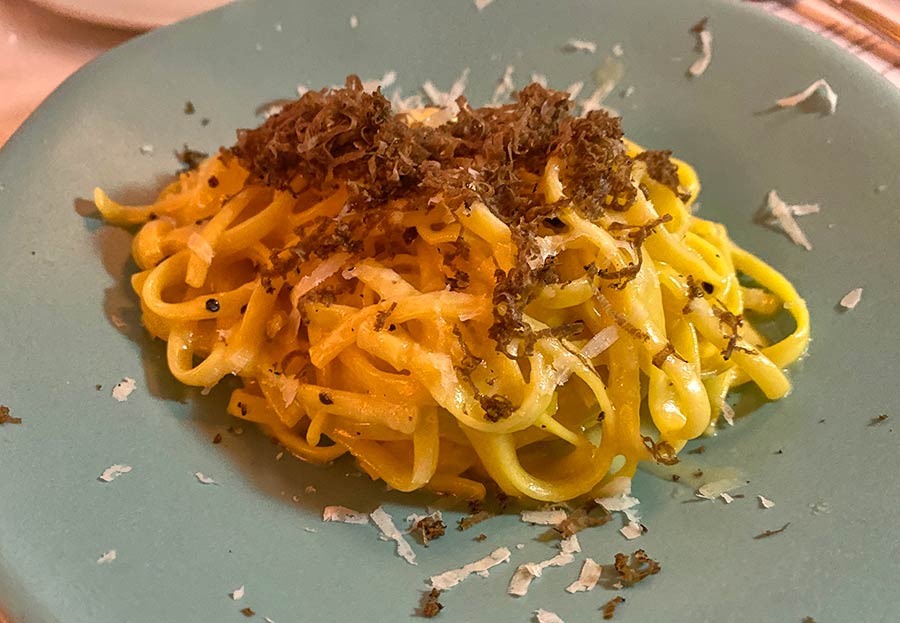 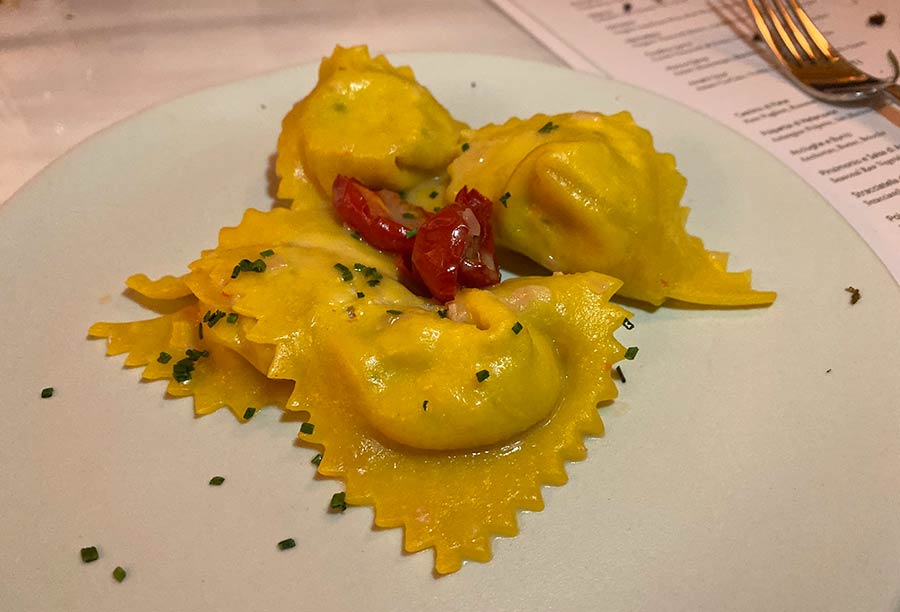 Crab & Scallop Rondini, Prawn & Confit Cherry Tomato (£12) - the pasta dishes can be on the small side - particularly in this case - so bear that in mind. 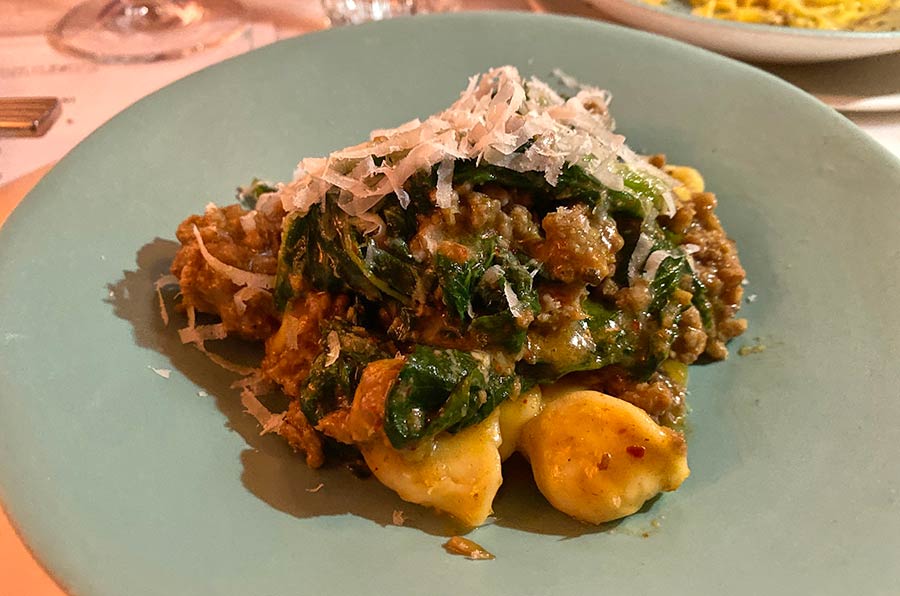 Orecchiette, Lamb Sausage, Cime di Rapa, Chilli (£7.50) - the best pasta dish on the night by far, with a strong kick to the sauce. Recommended. 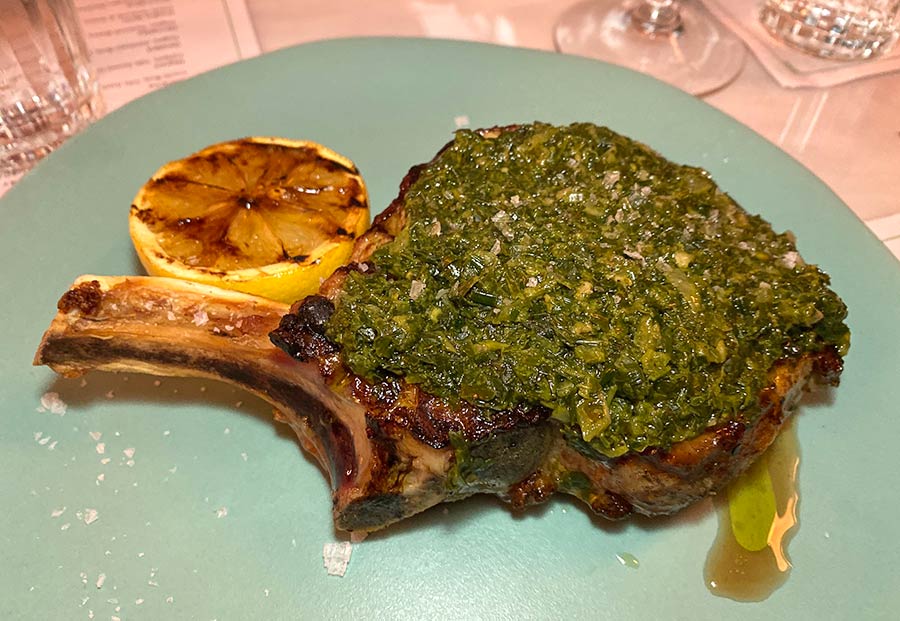 Veal Rib Eye, Salsa Verde (£36) - a truly excellent veal chop. We did, however, ask if we needed anything on the side with this and were told we didn't. This was a mistake - so if you order this, get something from the contorni section too - charred cabbage sounds like the best bet. 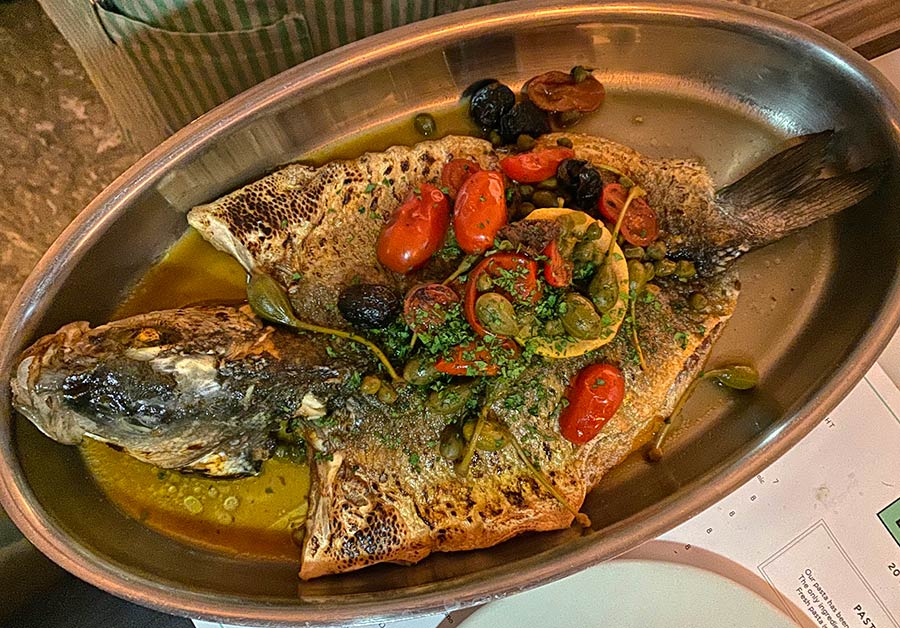 Whole Roasted Seabass, Lemon, Caperberries, Olives, Tomatoes (£29) - presented to the table like this and then taken away to be filleted.

If you have been through all the above - dessert may not be the first thing on your mind at this point - but there is gelato and sorbet if you're looking for something simple. As for us, we went for: 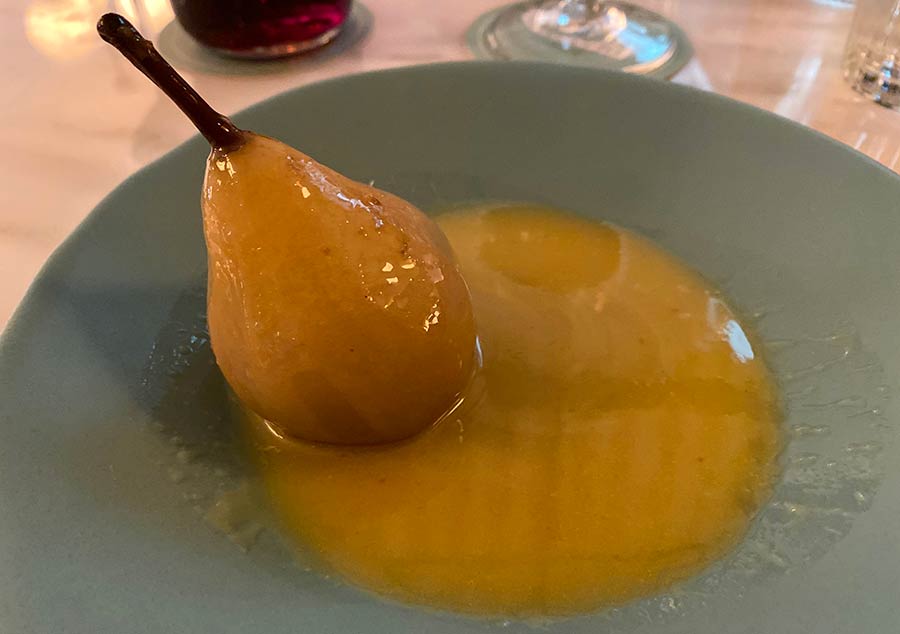 Poached Pear, Fig, Chestnut, White Chocolate (£6). We'll be honest, while it's a great pear, the menu promised a little more. 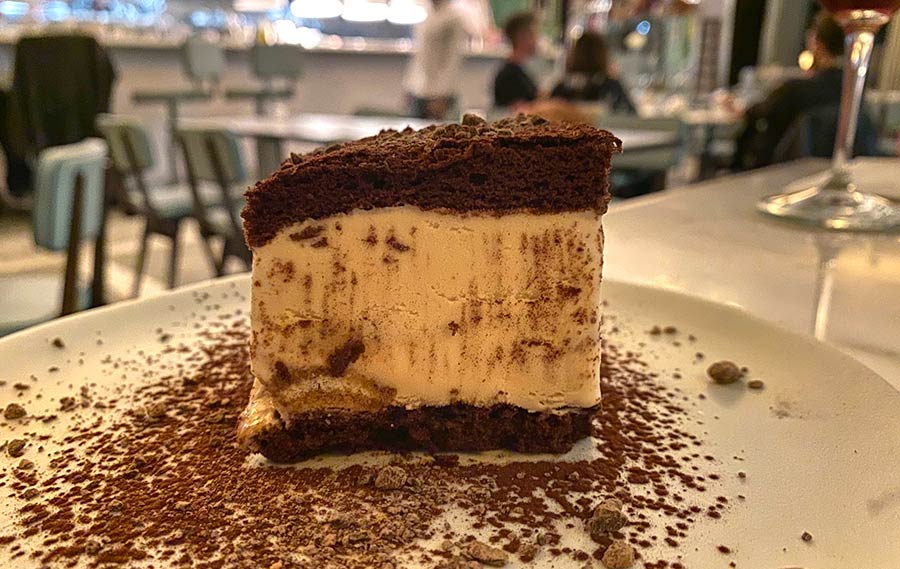 Tiramisu Ice Cream Sandwich (£5.50) - a good dessert but not the evening's winners which were... 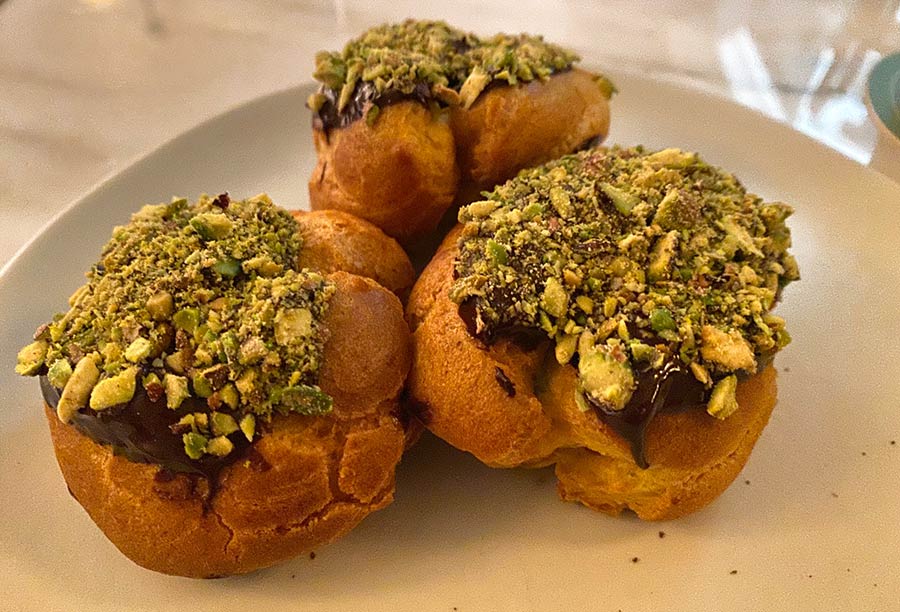 The wine starts at £28 for white wine and features only another four bottles in total (red and white) under £40 - before heading upwards to £295 for a 2010 Sangiovese. It's visibly more expensive than Soho and we do think this is a little punchy for the area. A wider selection of wines is definitely needed in the £30-£40 range at least and we'd also suggest lowering the entry house bottle price too - more in line with the Soho offering.

Lina Stores have created an instant hit in King's Cross, cementing their successes in Soho and Arcade Food theatre. It's definitely in need of a lower entry point on the wine list front, but they've created a buzzy space with great Italian food, further adding to King's Cross's reputation as one of the best places to eat out in London right now.

Hot Dinners ate at Lina Stores with a 50% discount.