[SIGPLUS_EXCEPTION_SOURCE] Image source is expected to be a full URL or a path relative to the image base folder specified in the back-end but /blog/2014/catmutton/gallery is neither a URL nor a relative path to an existing file or folder.
0
Shares 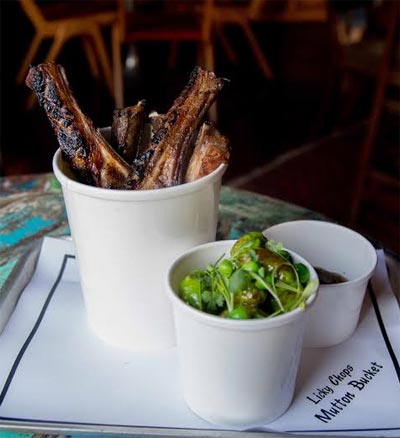 What can you tell me about the Cat and Mutton?

Hundreds of years old, the Cat and Mutton is a classic boozer situated at the top end of the ever trendy Broadway Market.

Following extensive renovation, the pub has recently relaunched. New owners the Columbo Group (who also own The Blues Kitchen, The Old Queen's Head and nightclub XOYO) have ploughed some solid investment into bringing what was previously a divey pub into a serious drinking and dining destination. The new Cat and Mutton is still very much a traditional pub downstairs but now also has an exciting offer upstairs in the form of Pearl's and Licky Chop.

Taking care of food is Ben Denner who is well known in the area thanks to his Lucky Chip burger van and, more recently, Licky Chops outdoor kitchen and BBQ. Decamping from the nearby Climpsons archway, Denner has brought with him a few of the more popular offerings from his year-long Licky Chops pop up there.

In its new incarnation Denner aims to make the most of having access to a well-proportioned modern kitchen, complete with a wood burning grill. Ben and the team are currently turning out a menu of small plates which is firmly grounded in the British isles but also borrows ingredients and techniques from the continent. The Cat and Mutton is however, still a pub, and those in search of a decent Sunday Roast or some hearty pub fare can also enjoy this here.

The dining room is well laid out for both couples and groups with small tables along the window and larger tables in the centre of the room. The refurb left most of the original lighting intact so if you're a fan of natural light or like taking photos of your food we'd suggest trying to grab a table near a window, this way you'll also be able to look out onto London Fields and Broadway Market.

The menu here is constantly changing and even the most popular dishes are given a break from time to time according to Denner in order to 'keep things fresh'. We thought the menu was pretty well balanced with a third meat, a third seafood and around a third dedicated to vegetables - a refreshing thing to see. The dishes are described by waiters as 'plates' who recommend trying at least three per person not including sides.

Of what we ate, we particularly enjoyed:

There have also been good reports about the traditional Sunday roast menu. Here the team have been pulling out all the stops to make this the best roast around offering four roast options which include rare breed pork belly, leg of lamb and 42 day aged Dexter beef rump - all cooked on the wood grill.

How about wine and cocktails?

Often the downfall of a gastropub, the drinks offer here is not to be sniffed at. Tom Gibson who also owns Ruby's cocktail bar in nearby Dalston has brought in an experienced team and brand new menu to run Pearl's, the cocktail bar which shares the space with the upstairs restaurant.

Diners would be well recommended to arrive early to sample a drink or two, or alternatively to stay on afterwards as drinks such as the Bloody Ruby, a combination of Campari, vermouth and blood orange juice or the Pryor to Midnight, a rye and sake cocktail are not to be missed.

For the wines, there's a well rounded selection of reasonably priced reds and whites available by the glass, carafe and bottle. On a warm evening the whites were certainly holding our favour, although we did spot a couple of reds such as the De Loach Pinot Noir from Sonoma, California which we'd order a bottle (and a bucket of chops) without hesitation.

Whilst pubs coupled with quality restaurants are certainly nothing of a novelty in London, it's cheering to see that there's still unique ways to bring these elements together in an interesting format.

Prices were correct at the time of writing. Hot Dinners ate as guests of the Cat and Mutton.