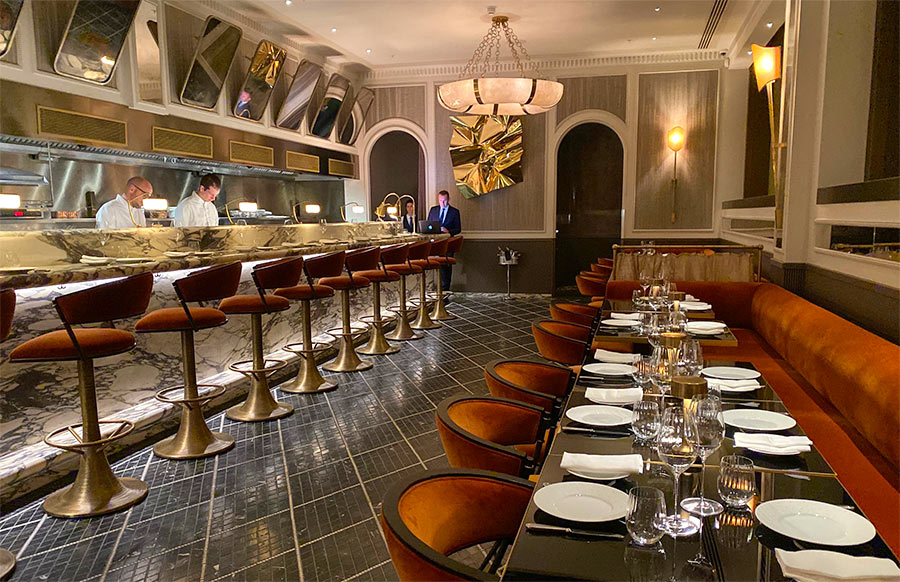 A look down the long dining room - choose right or left for different experiences.

What can you tell us about Le Comptoir Robuchon?

It's a restaurant that's essentially inspired by the legacy of hugely influential chef Joel Robuchon. When the chef died in 2018, he left behind him many restaurants, including L'Atelier de Joel Robuchon near Covent Garden. That restaurant closed with a view to open in a new guise later on - and that's where we are now. Le Comptoir Robuchon is a restaurant designed to both be inspired by and build on the Robuchon legacy.

It's in Mayfair, about a minute's walk from Green Park station and on the same road as HIDE. It's all part of a brand new development there, called Clarges Mayfair, which contains some VERY fancy apartments. You may also pass the Robuchon deli on Piccadilly on the way to the restaurant (although it's not open at the time of writing).

The area isn't blessed with many handy drinking establishments, it has to be said. The bar in the basement at HIDE is recommended, as is Manetta's bar at the nearby Flemings hotel - both decent if you fancy a cocktail. But if that's what you're after, then we can definitely recommend Le Comptoir too. There's a small bar at the front, and, based on our small selection, they're knocking out some excellent cocktails. 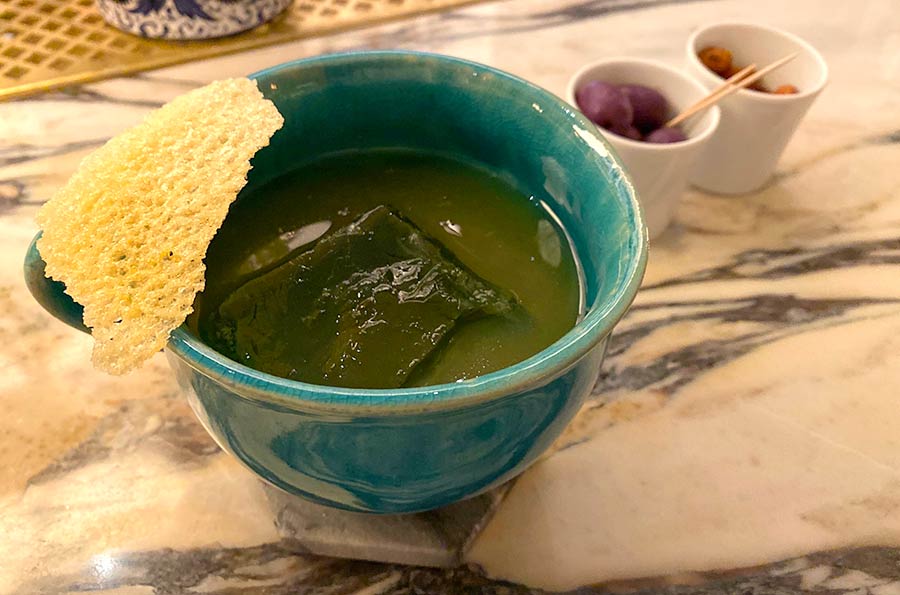 This was the "Secret Punch of the Pope" - lemon, lemon and pink grapefruit sherbet, Italicus, Bushmills Black Bush, tea and with a ginger and Parmesan crisp (£15). Note the olives for scale - it's a massive cup.

We're ready to eat now - where should we sit?

There are two very different options here - both on either side of the long dining room (see the image at the top). First off - and probably the place we'd recommend - is the counter, which lines much of the length of the room and the open kitchen. If you like chatting to the chefs as they bring your food and want to know a little more about everything - this is the place to be (also worth noting - the stools are very comfy and you shouldn't have dangly leg syndrome).

But if that's just not your thing, or there are more than two of you, then the other side of the room with standard table seating is for you.

So how does the menu work?

In the spirit of many a restaurant menu of late, both mains and starters are billed as for sharing. These are presented either as dishes you'll have to apportion, or as plates with several bite-size morsels. Some of the latter come with three pieces to share - we really think these should be even numbers if billed as sharing. In addition - dishes are either "Les Eternals" (Robuchon classics) or newer dishes of "La Saison".

There's definitely a haute cuisine, fine dining approach to everything on the menu so ideally, you're going to want to order a few dishes. The food is quite excellent - but here it's worth noting that they are at very Mayfair prices with starters between £12 and £26 (with one at £49) and mains from £23 - £49 (with one £15 exception). So your bill will quicky mount up.

With that in mind - here's what we went for: 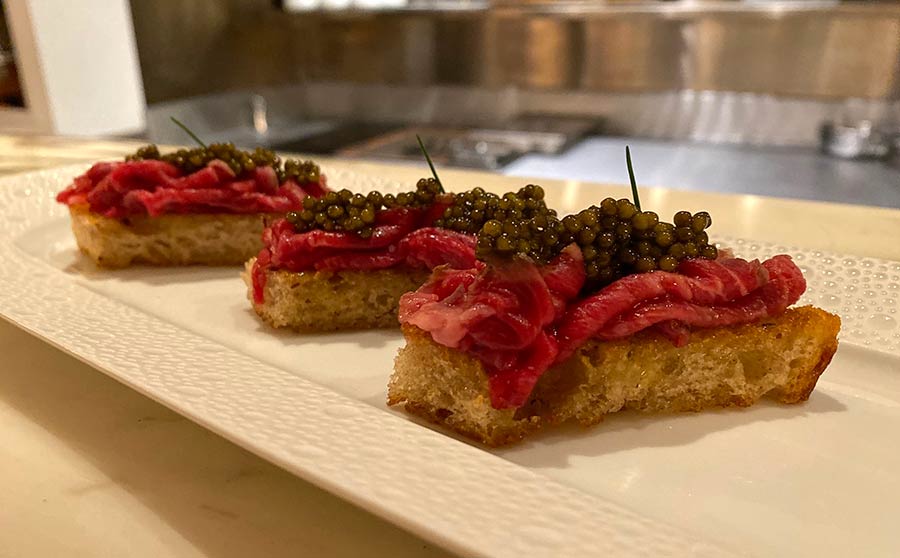 Kicking off with the "l'Aperitif" section - this is "WAGYU" - Seaweed Butter, Caviar (£29) 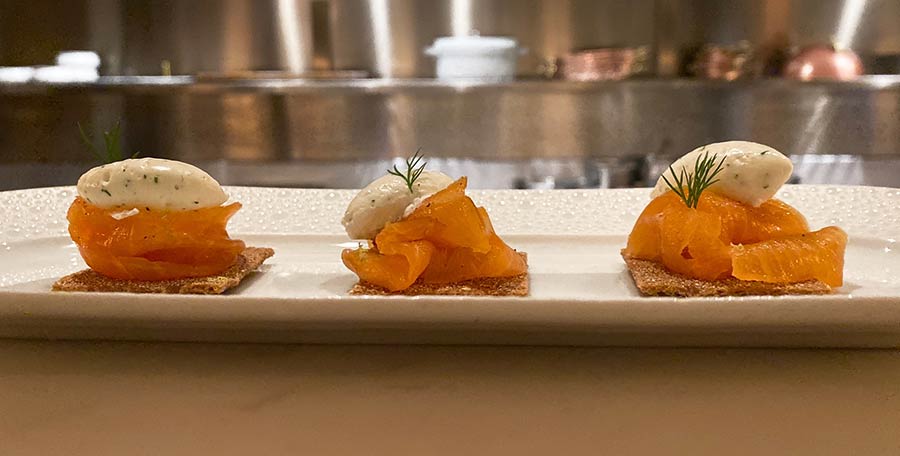 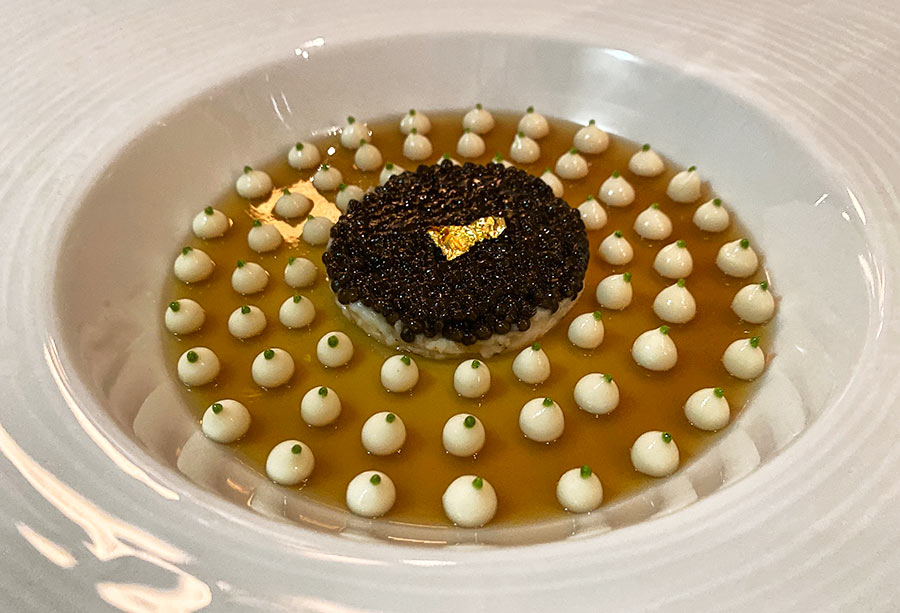 LE CAVIAR - Crustacean gelée, Cauliflower cream (£49) - yes you read that price correct. It's a true Robuchon classic and is - we heard - extremely difficult to make. It's good - but if we're being perfectly honest, we think there are better dishes available, like... 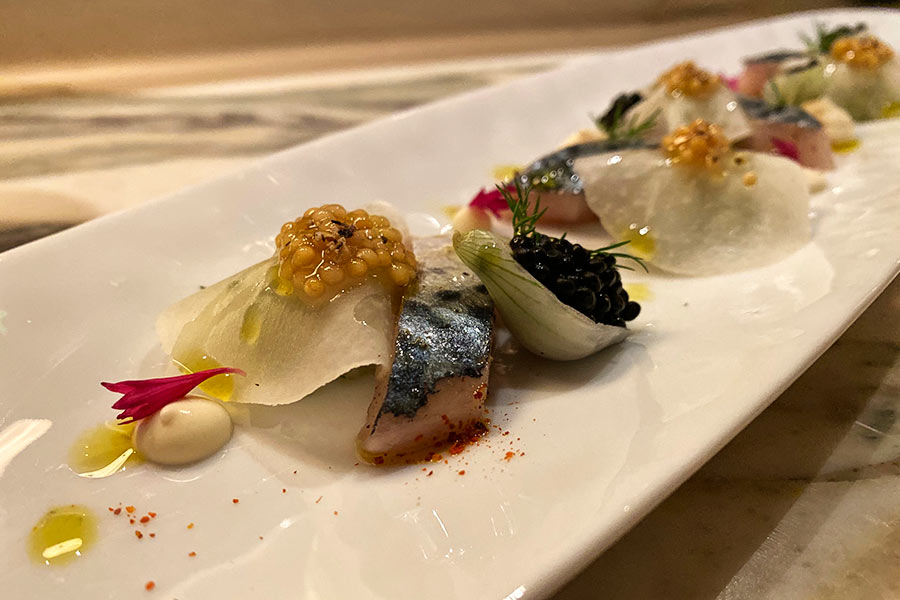 LE MAQUEREAU - Mackerel, Kohlrabi, Horseradish (£14) - easily our favourite starter. We can normally take or leave mackerel (despite it seemingly being on London menus everywhere) but these were phenomenal bite-sized marvels. 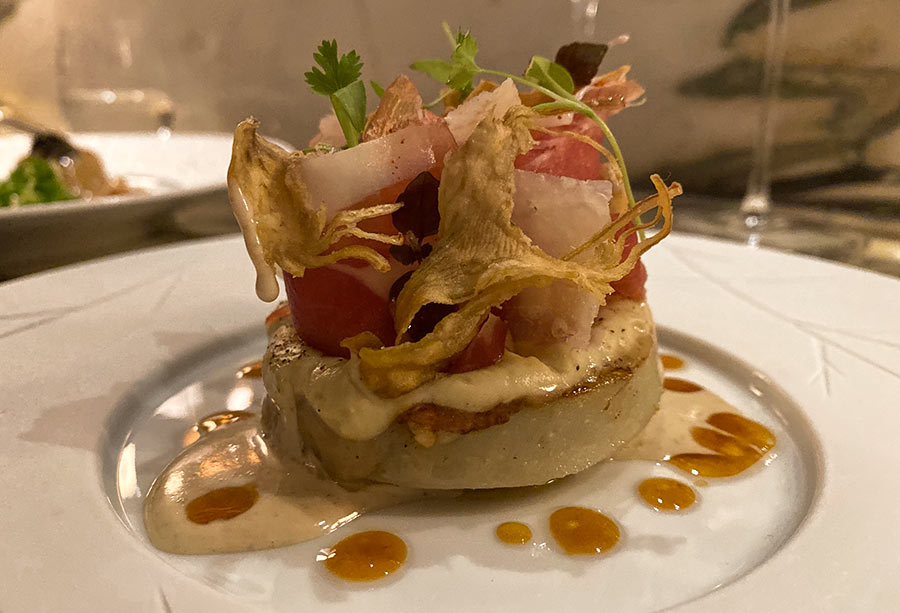 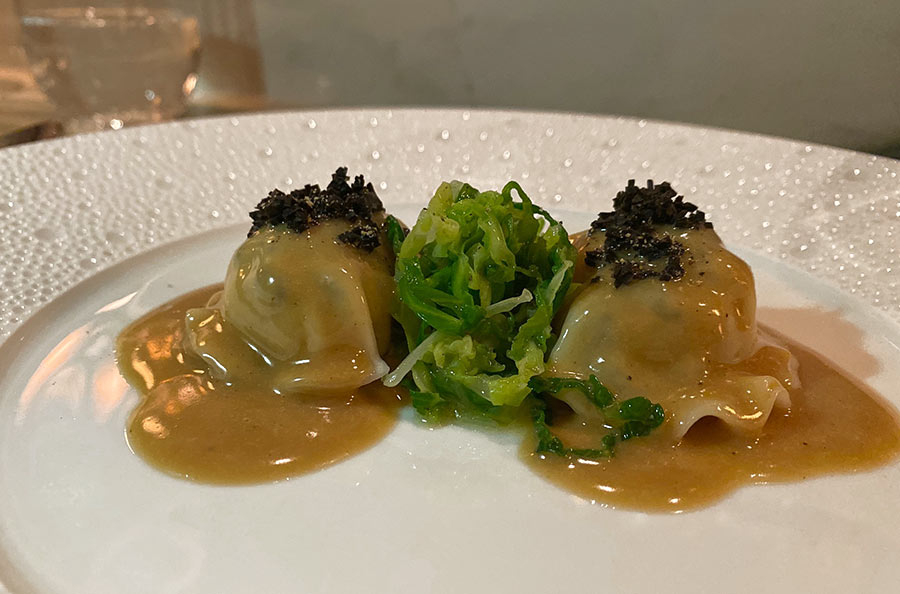 LES LANGOUSTINES - Raviolis, Foie gras, Savoy cabbage (£26) - yes, there is a lot of foie gras on the menu. If that's what you're after, we'd recommend ordering this particular dish. 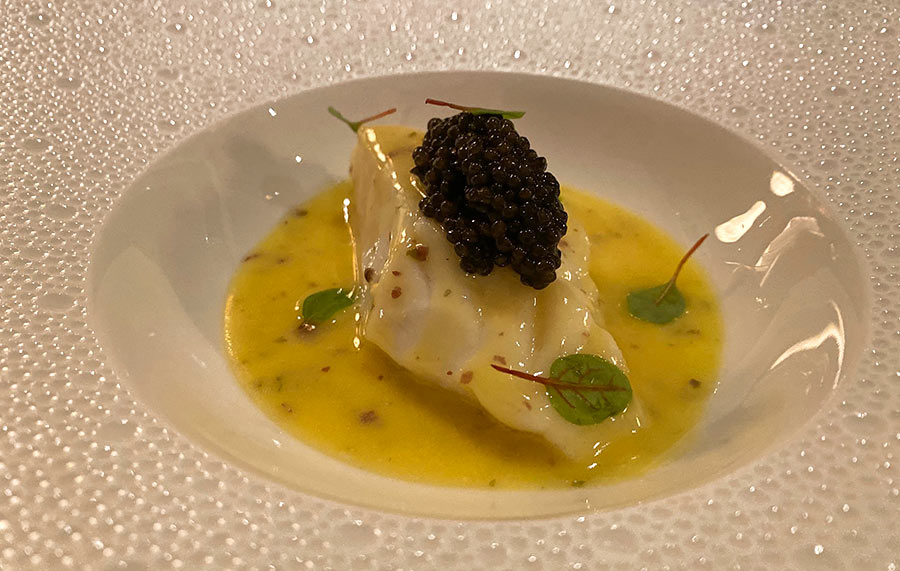 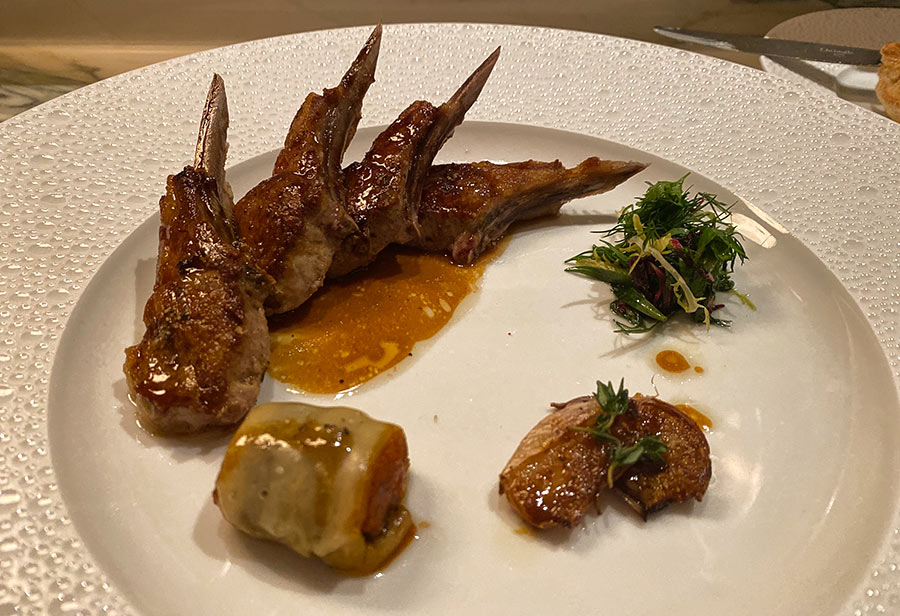 And then there's the mash.

Joel Robuchon's "Puree" is legendary. Essentially a 50/50 mix of butter and potato, it is, without question, the best mashed (pureed) potato that we've ever encountered - and we've eaten a lot. Each main comes with a portion of puree, and we'd suggest that you make sure you get your fair share. It's the gloopiest, butteriest mash we've encountered. Close to aligot, but just the right side of the potato divide. Here's a pic. 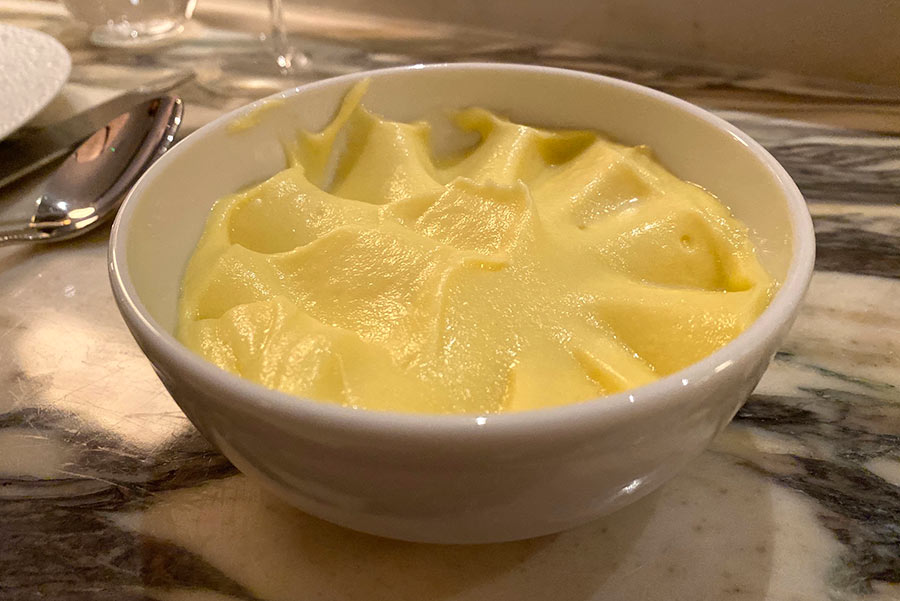 The "Puree" that comes with every main course. We had three of these if we're being honest. And we could have had a fourth.

But we think a video might just convey its butteriness better...

There is indeed. Baked in their own off-site bakery, it comes first thing, and you'll want to keep this around for the whole meal to mop up various bits and pieces. If it's all too much to have - ask them to wrap it up for you to take home. 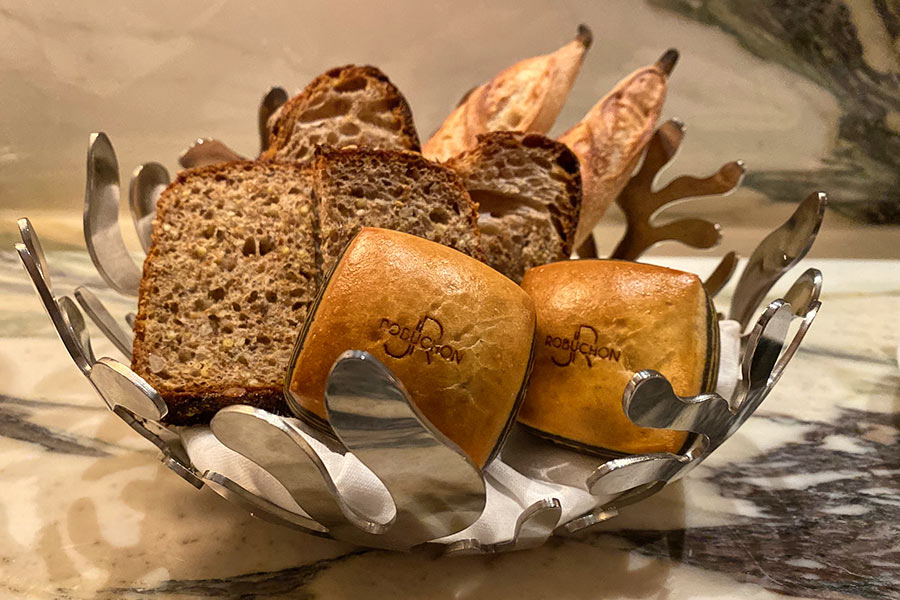 You'll want to hang on for at least something from the dessert menu... 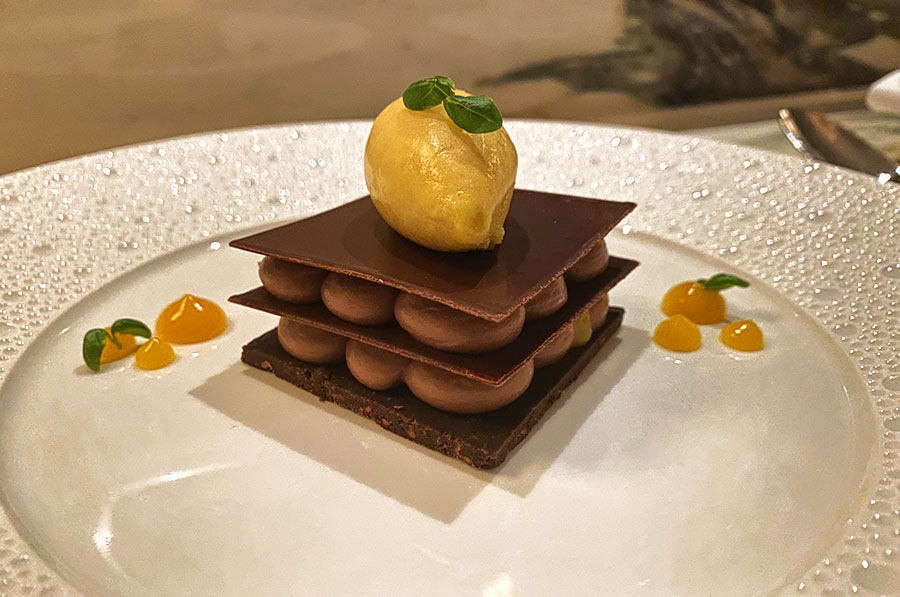 LA PASSION - Chocolate, Passion fruit, Sorbet (£15) - this was an undoubtedly excellent dessert. A shame to destroy as it's so beautifully designed - but just wonderful. 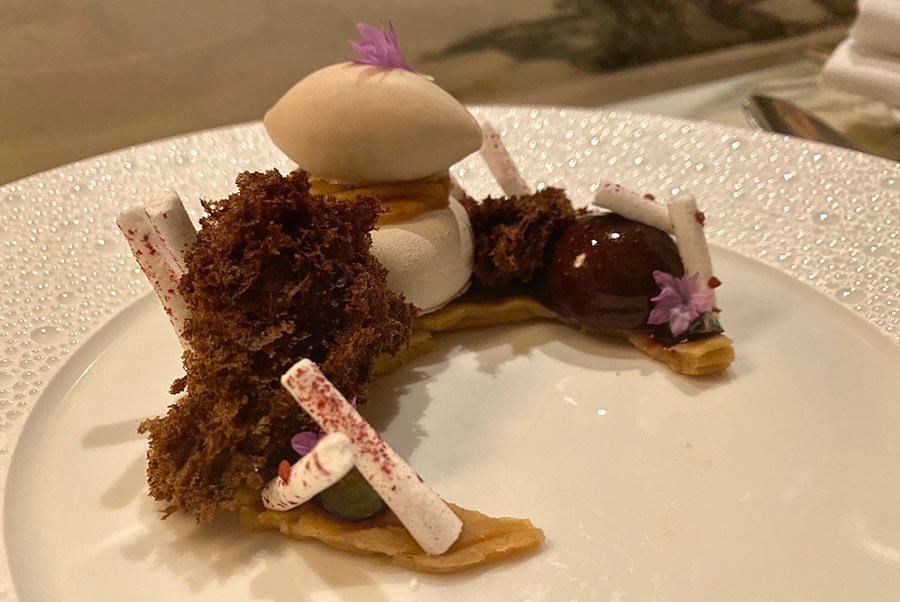 How about a lunchtime deal?

If you're a bit thrown by the prices above, then the lunchtime deal is for you. It's £39 per person, Monday - Friday and includes dishes like "LE BURGER - Beef, Foie gras, Peppers, Rocket" as well as the mackerel and artichoke dishes above.

There's a rather weighty tome available, with glasses starting at £8.50 and bottles from £44. So yes - it really is quite the punchy list. But if you're out to splurge, then there are plenty of options here, with many bottles in the £100s. And if you want that Richebourg Grand Cru? That'll set you back £5210, thanks.

Le Comptoir Robuchon won't be for everyone, mainly due to the prices. But if that hasn't phased you, then here's a restaurant with a team working as a well-oiled machine turning out some exquisite food that is, frankly, a very good fit for the area. And then there's the puree. It really is astonishingly good, and we think you should find a way to try it just the once. Or maybe three to four times in one sitting. The Robuchon legacy seems secure here.

Hot Dinners ate as guests of Le Comptoir Robuchon. Prices are correct at the time of writing.

Where are they? 6 Clarges Street, London W1J 8AE

How to book: book online.