Test Driving The KPH - the Legendary Ladbroke Grove pub is back 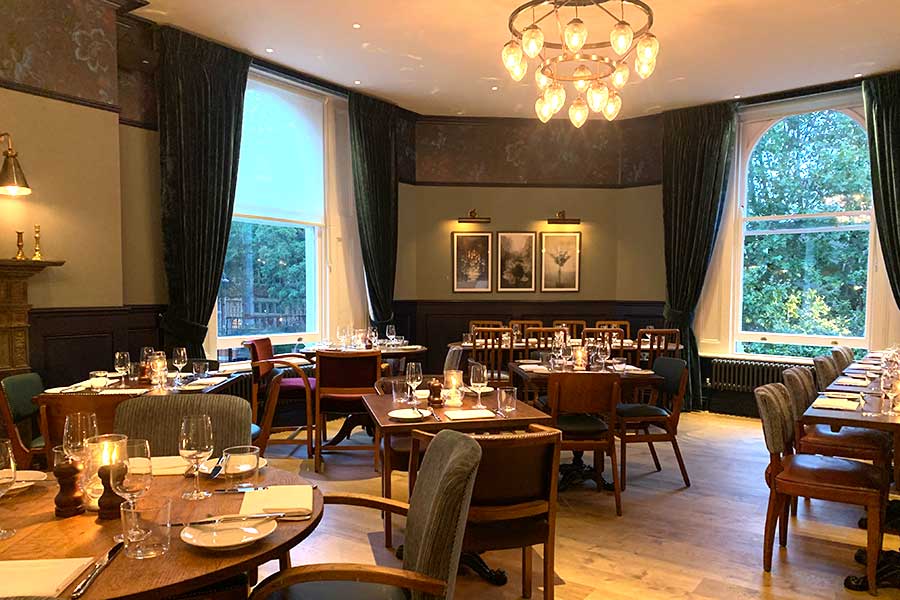 The main upstairs dining room at The KPH

What can you tell us about The KPH?

The pub - aka Kensington Park Hotel - has some history, for sure. Once known for its music connections, it's famed as being the place where Tom Jones had his first gig in London, it was under threat of closure for some years until Harcourt Inns stepped in. They're the people behind The Coach and the Harcourt, among others and on the food front have Henry Harris looking over the food at all the pubs as Chef Director. They'll also have rooms to stay in above the pub (they're coming soon).

But it's not just Harris at this pub?

Indeed not, he's brought in Ruairidh Summers, who we've previously run into at his Summers pop-up in Kilburn. We think his cooking is as good a reason as any to head over to the KPH as soon as you can. The food is split across the two floors, with a different menu in the main pub downstairs to the dining room upstairs.

So starting with the pub downstairs - what food is on offer?

The menu in the pub is a collection of snacks, small plates and more standard pub fare - with a few of the dishes also available on the menu in the dining room. Like upstairs, expect this menu to change regularly with the seasons (we've already seen a few changes from when we popped in the door a couple of weeks back).

So there are dishes like a roast beef tonnato on toast (which is something we'll absolutely have to come back for), cheese and charcuterie plates, croque monsieurs and madames alongside their own cheeseburger and frites (£13).

We tried a couple of snacks on our visit: 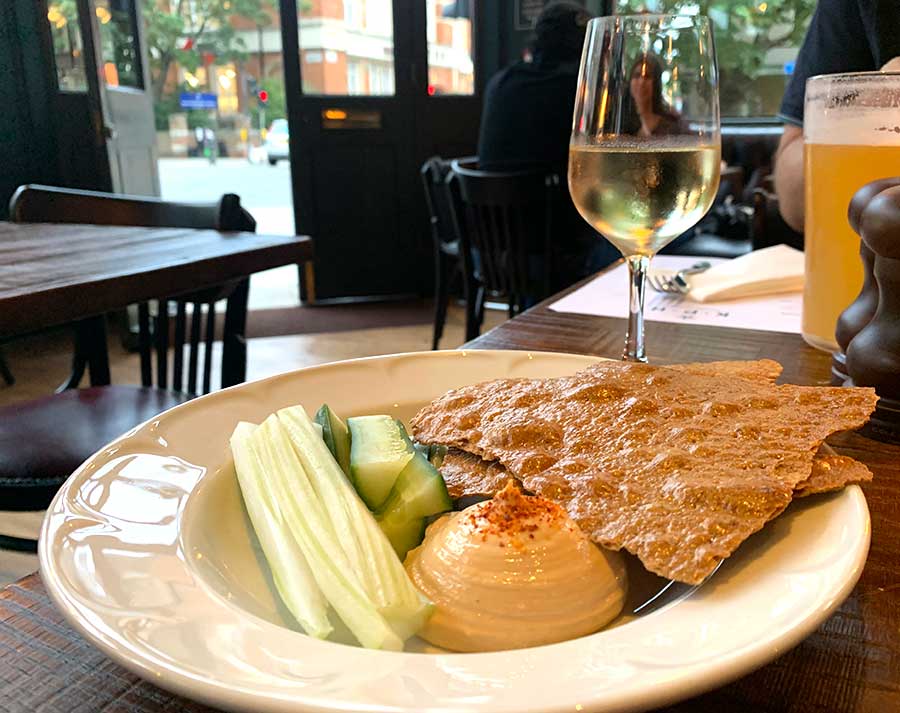 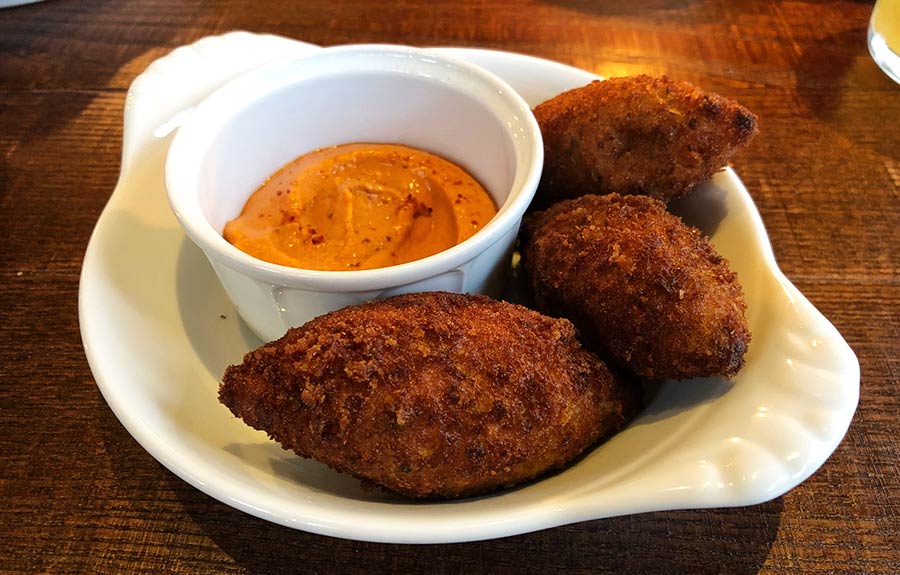 Smoked ham croquettes and romesco sauce (£6) - we find it near impossible to avoid any croquettes on a menu. Thes are smoky wonders,  (and that sauce is a nice pairing).

What about the look of the pub compared to the dining room?

Downstairs is very much your traditional pub look and feel - but head upstairs if you're after something that's more like a traditional restaurant (see the pic above).

What should we expect from the food upstairs?

Here we're into a more traditional three-course a la carte affair with a few snacks on offer (and it might be worth taking note of some of the small plates on offer downstairs in case you really fancy something from that menu). You'll see a couple of classic dishes from the other Harcourt Inns pubs - like the onglet and frites - but otherwise, it's a French bistro affair, most of it created by Summers. Here's what we had on the night: 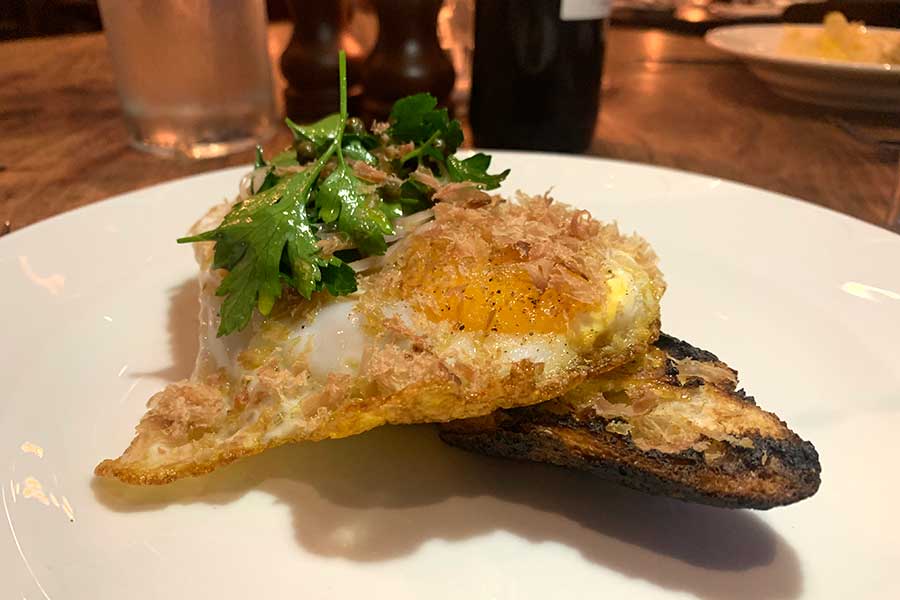 Duck egg and mojoma tartine (£8) - mojoma is dried tuna (yes, we had to look it up) and you can see the flakes of it on top of what is an exemplary egg on toast. 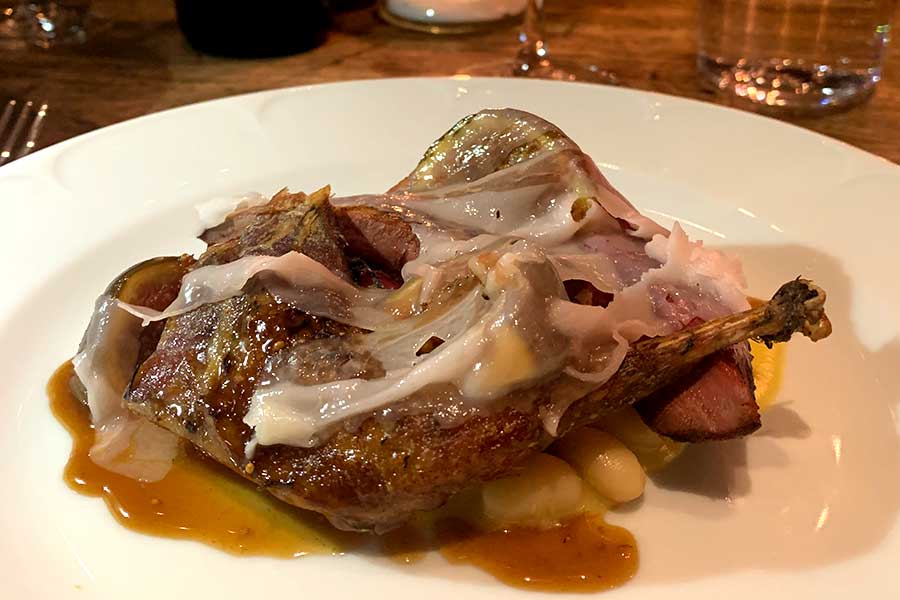 It's game season and this is actually the first grouse (served here with coco beans and figs) we've managed to try this year. We love grouse and covering it with lardo only enhanced the bird for us (£19 for this half grouse - or £38 for whole). 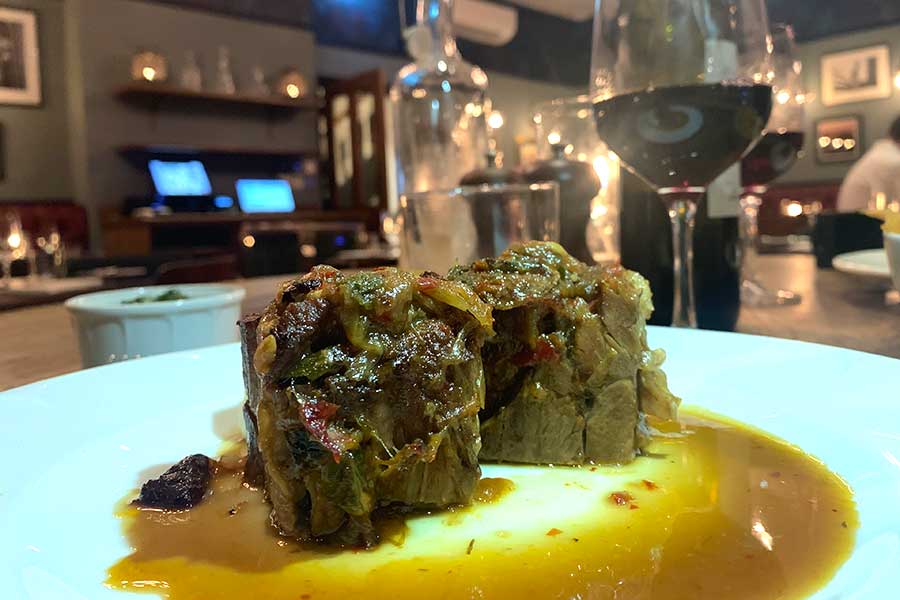 Braised lamb, harissa, tabbouleh (in the background) and creme fraiche (£20) - just one of the most wonderful lamb dishes we've had in a while. Perfectly seasoned. Goes well with their frites, which gives you an excuse to order those...

There are a few options on the menu. So for starters, a chilled beetroot soup with ricotta and almonds (£7.50) and the dish pictured below too. And on the mains, Parisian gnocchi, sweetcorn and girolles (£14). 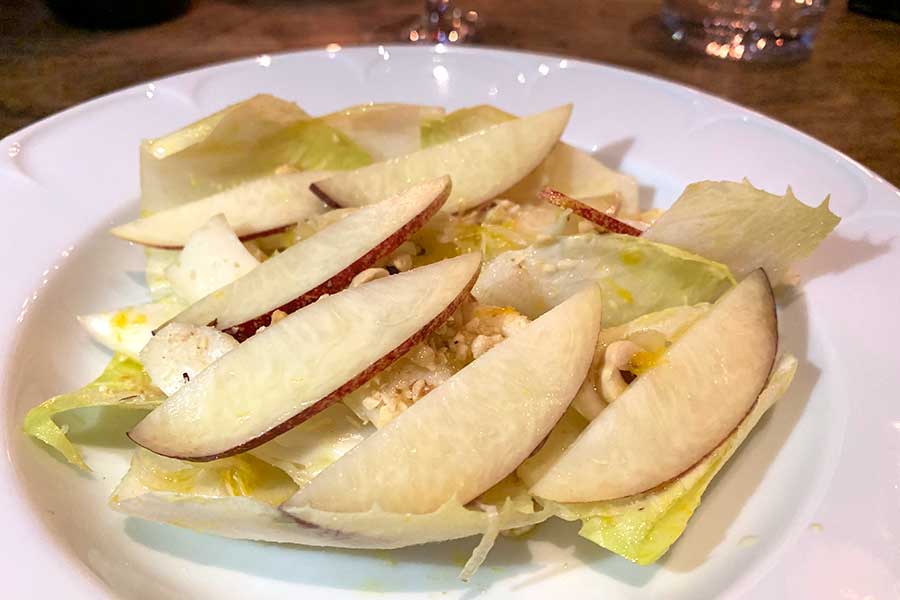 And leave room for dessert?

Of course - there are some stellar desserts on offer here. Particularly the madeleines... 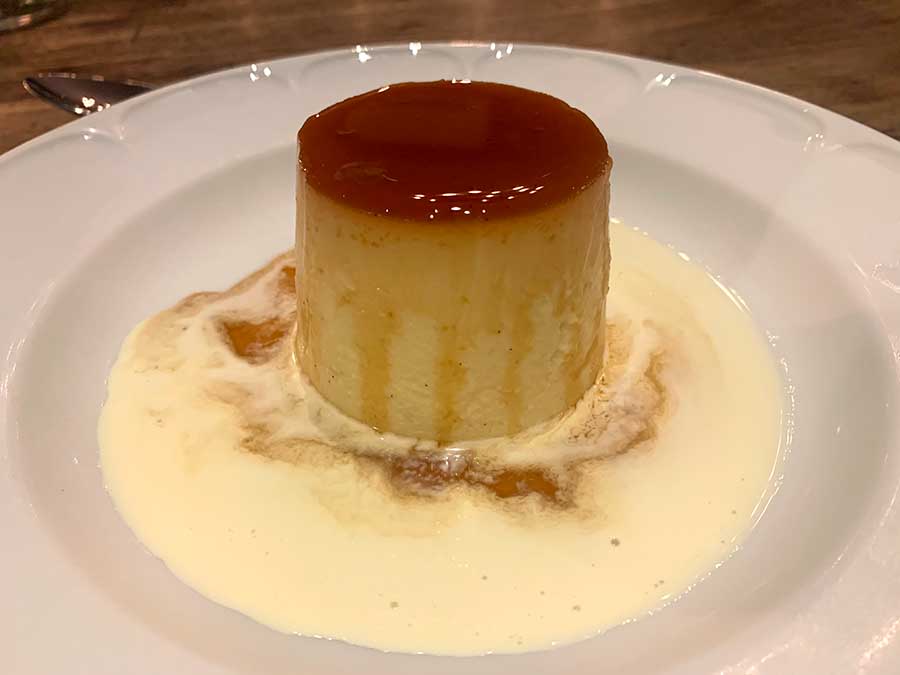 This creme caramel (£6) is apparently Henry Harris's long-held, much-loved recipe - it's a perfectly turned out dessert and we loved the fact they hadn't messed around with it. 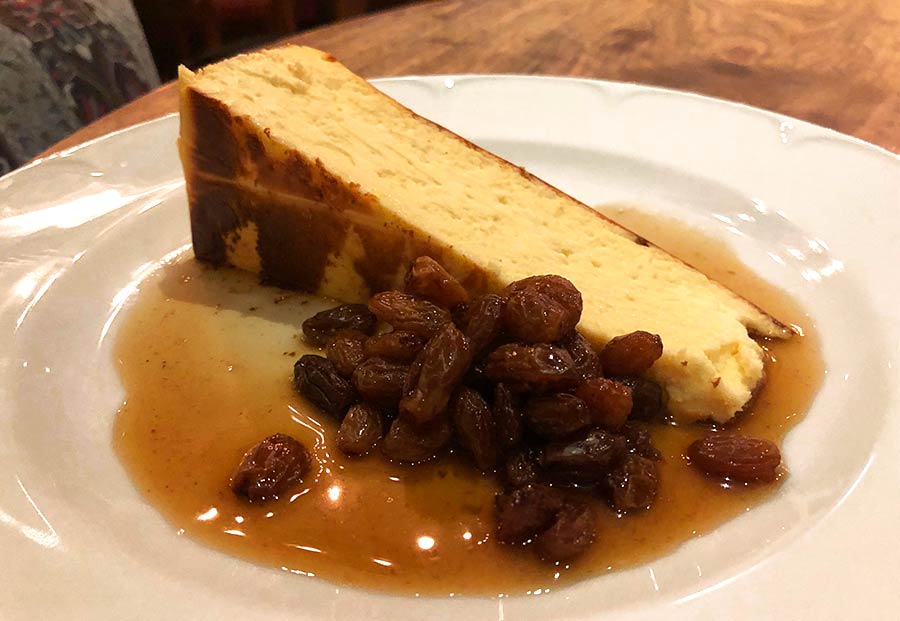 Basque cheesecake with cognac sultanas (£7) - and boy those sultanas are boozy. A perfect match. 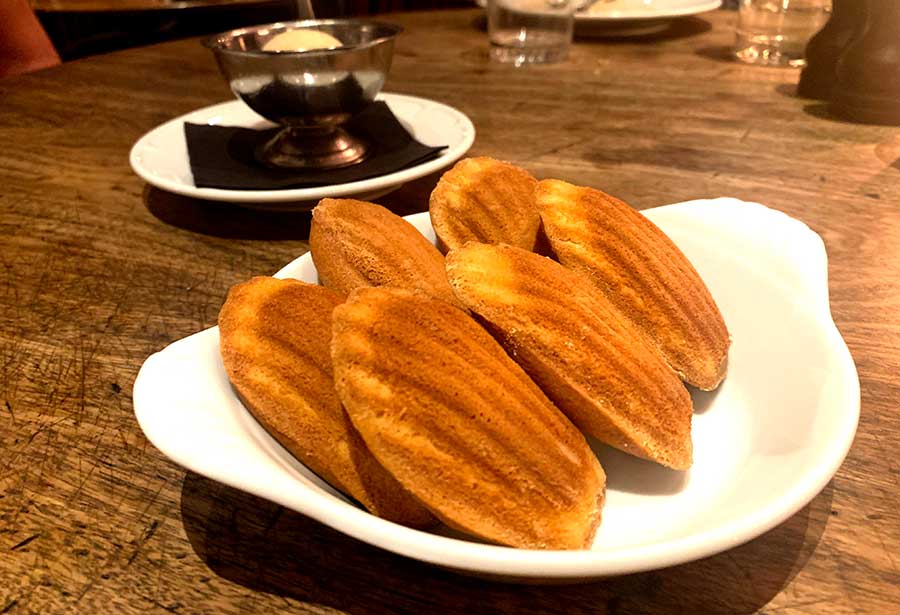 These are also available in the bar downstairs - which would make it hard for us to ever pass the KPH without going in for beer and madeleines. Get 6 for £5 or 12 for £9 and they're freshly made (but the 20-minute wait is well worth it). We took some of these home and are snacking on them as we write this...

Harcourt Inns really are on a roll. Their pubs continue to be a success, with each one offering its own take on a Henry Harris style menu. Putting Ruairidh Summers in charge at The KPH does give it a slight edge on some of its sibling pubs. The food is stellar throughout - and the prices are pretty good too. If you're ever in the area, you owe it to yourself to head in (and leave with some madeleines, of course).

Hot Dinners ate as guests of The KPH. Prices are correct at the time of writing.

More about The KPH