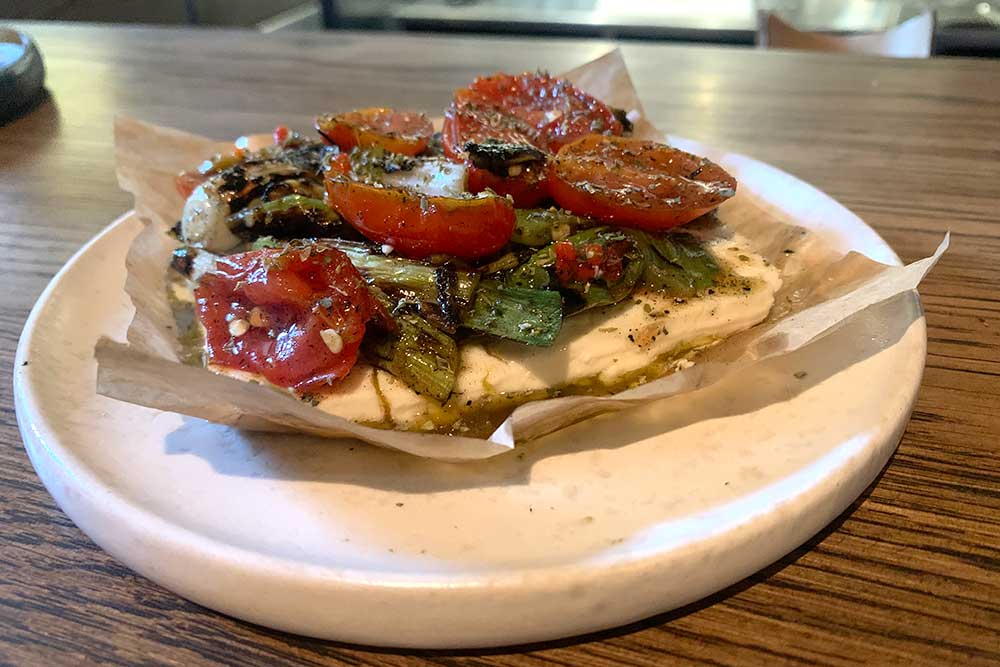 Charred okra with tomato and feta at INO.

What do we need to know about INO?

It's the new restaurant from the team who brought us Marylebone restaurant OPSO and who also run the two-Michelin-starred restaurant Funky Gourmet in Athens.

You'll find it on Newburgh Street, just off Carnaby Street. The nearest tube is Oxford Street.

Obviously, there's Antidote just down the road, but given the effort they make at INO with their cocktails and wine list we'd suggest coming straight here. There are a few lighter cocktails on the menu, but we'd suggest going for one of these. 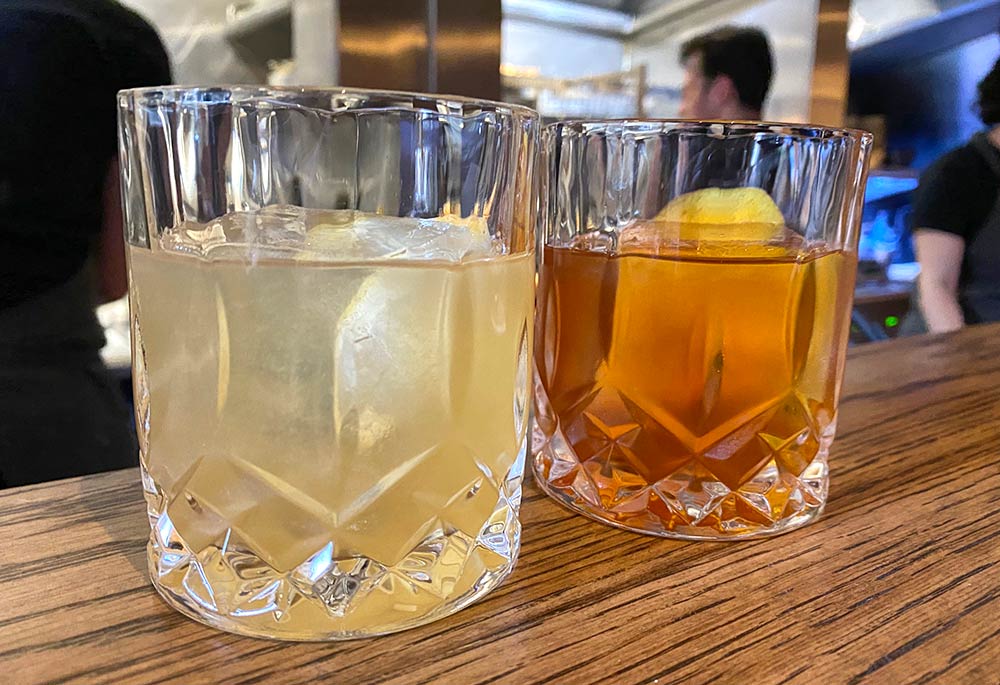 There are three barrel-aged cocktails on the menu (all £11). These were the Whiskey Sour and Cacao Au Rum, both of which you'll want to try.

There's a small amount of alfresco seating outside and a lovely little dining room at the back of the restaurant with loads of natural light from a skylight. People watching is best from the four counter seats up at the front window, or opt for a stool along the main counter - although be warned, the spacing between yourself and the counter is pretty snug and may be an issue for the taller folks. 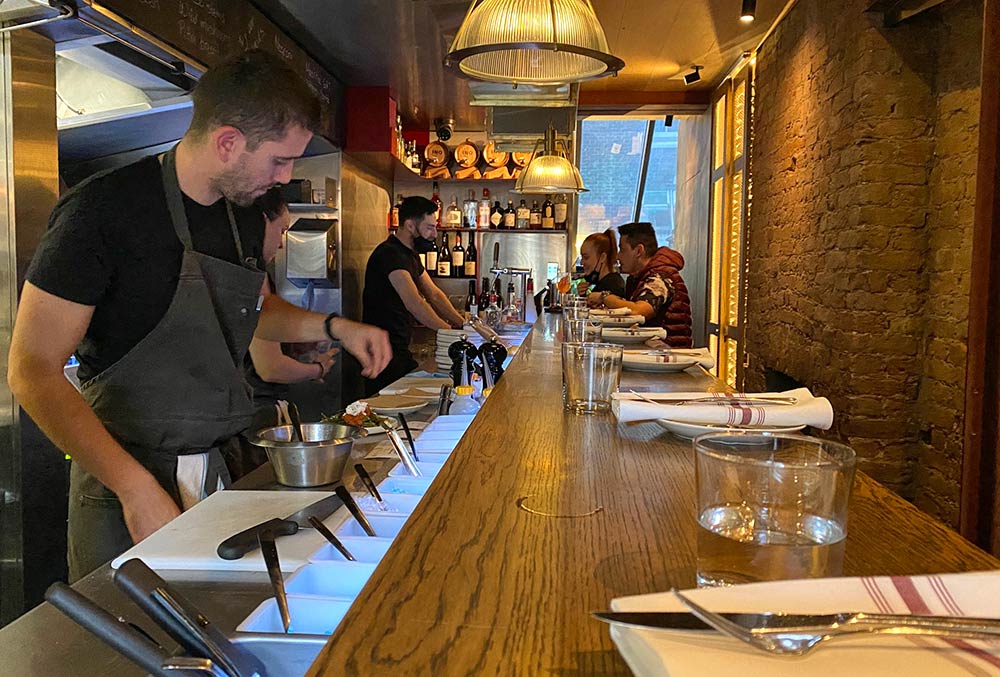 Get up close and personal with the chefs at the counter

What sort of food do they serve?

At the heart of the open kitchen is the Psistaria open fire grill where much of the food that's served up spends time during the cooking process. It's really a series of small dishes, which would reward popping in for a casual glass of good wine and a few things on the menu. 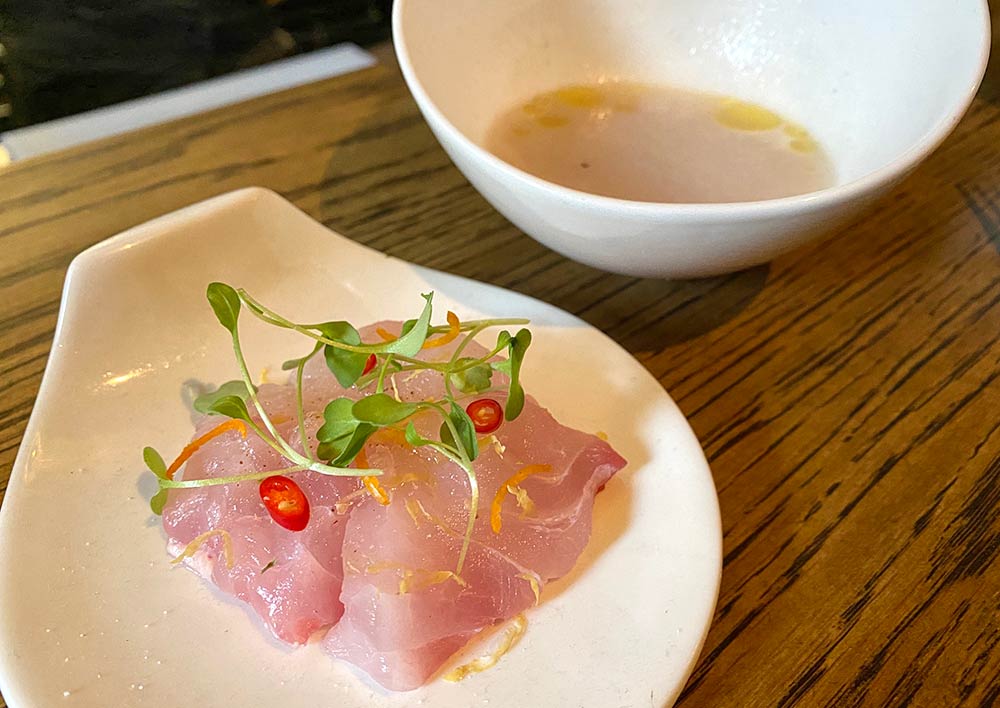 Kakavia catch of the day broth with sashimi (£9.50) - the fish was grouper on our visit. You dip the sashimi in the fish broth, further infusing it and then finish by drinking the soup direct from the bowl. 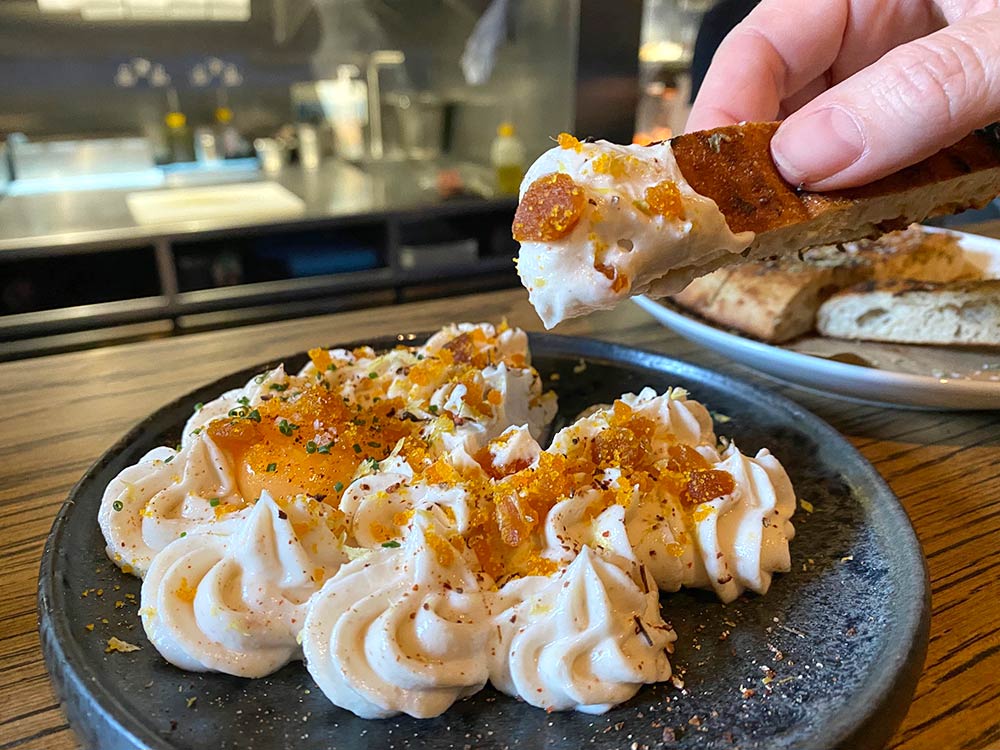 Taramas, slow-cooked yolk with bottarga and pitta bread (£11.50) - a generous dish of top-class taramasalata topped with shavings of bottarga for extra umami. 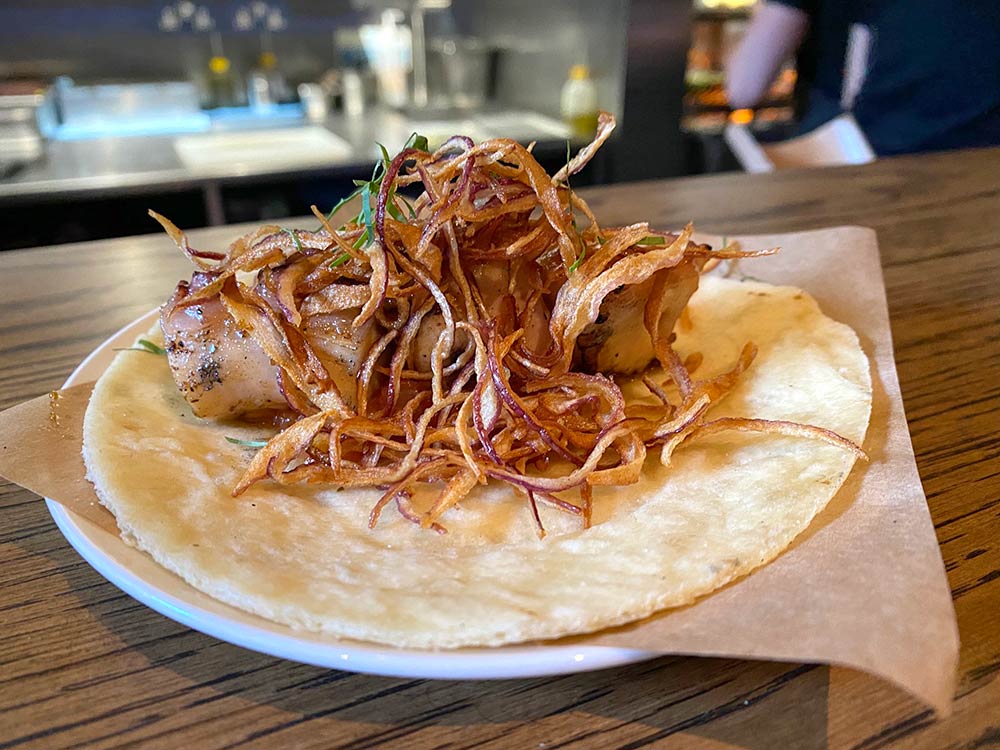 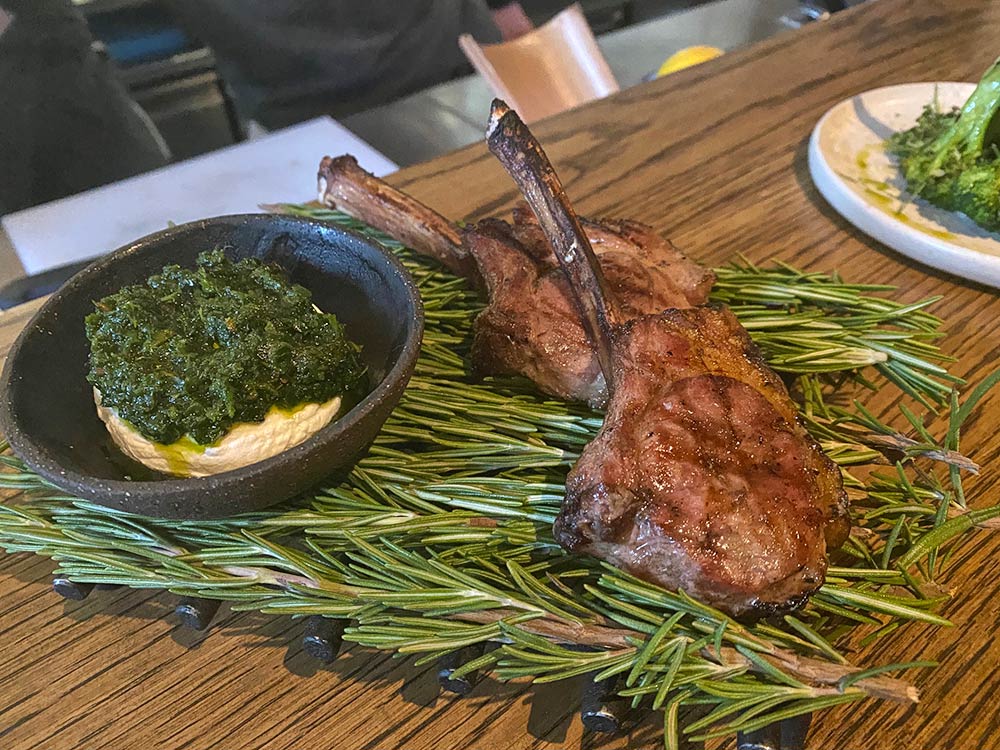 Lamb chop 'michichurri' with greek yoghurt labneh (£12 per chop) - a great presentation, and you are going to want to eat these with your fingers to get all the bits. 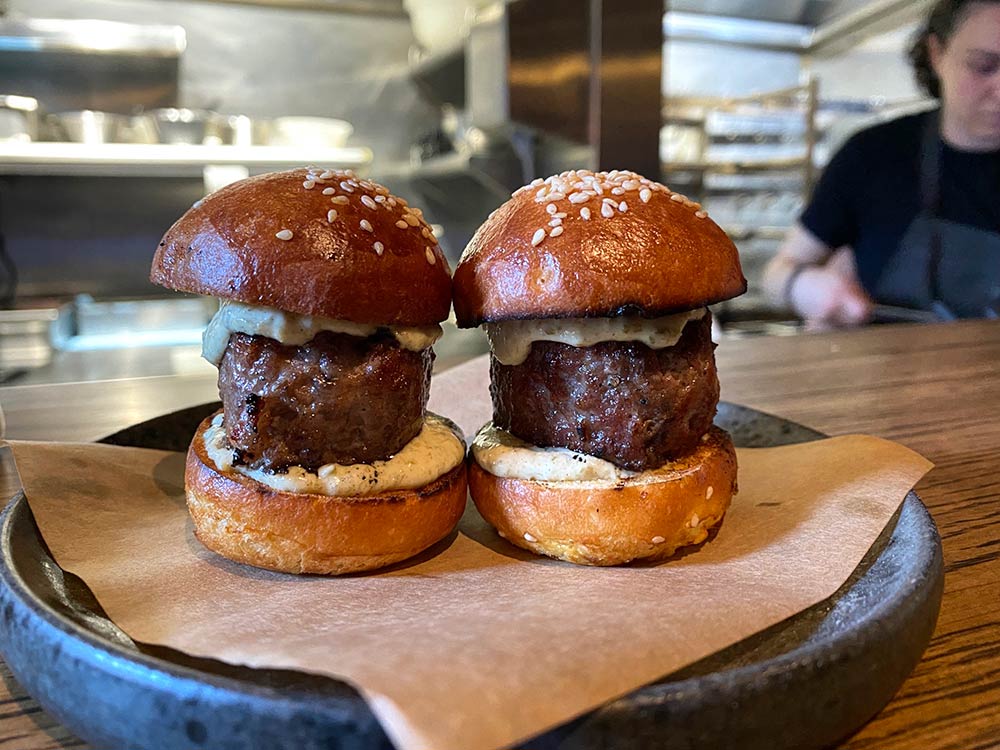 The funky burger with tahini on brioche sliders with tartare sauce (£6.50 each) - cute as a button, perfectly cooked to medium and gone in two bites.

What about vegetarians or vegans?

There's a decent selection on offering if you're aiming to go meat-free or plant-focused - from the cauliflower steaks with spring onions to charred okra with tomato and feta. There's also this from the sides section. 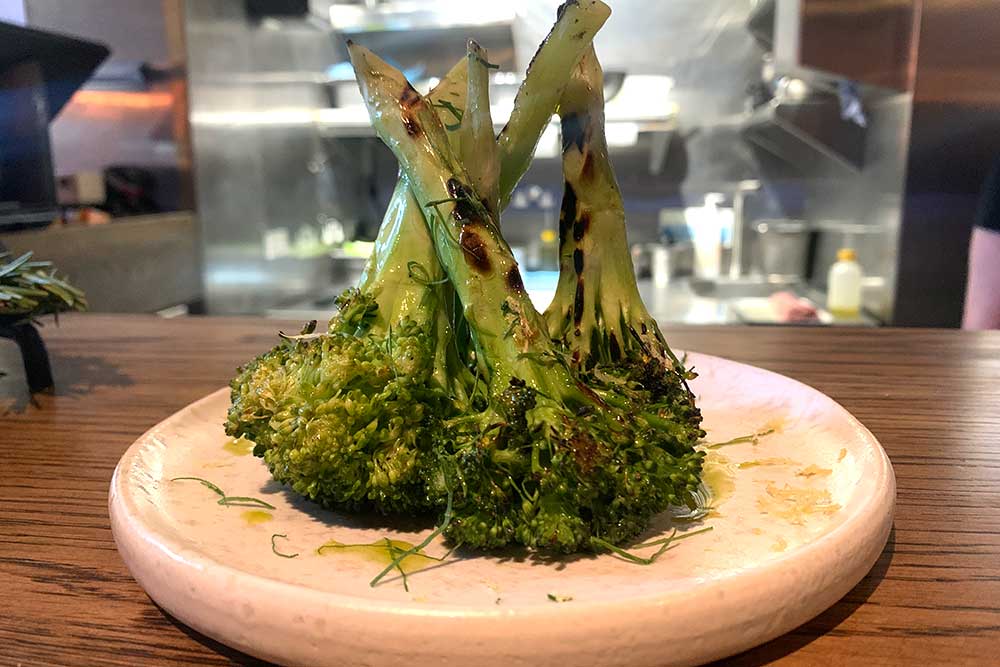 Absolutely - there are two desserts you'll want to consider. 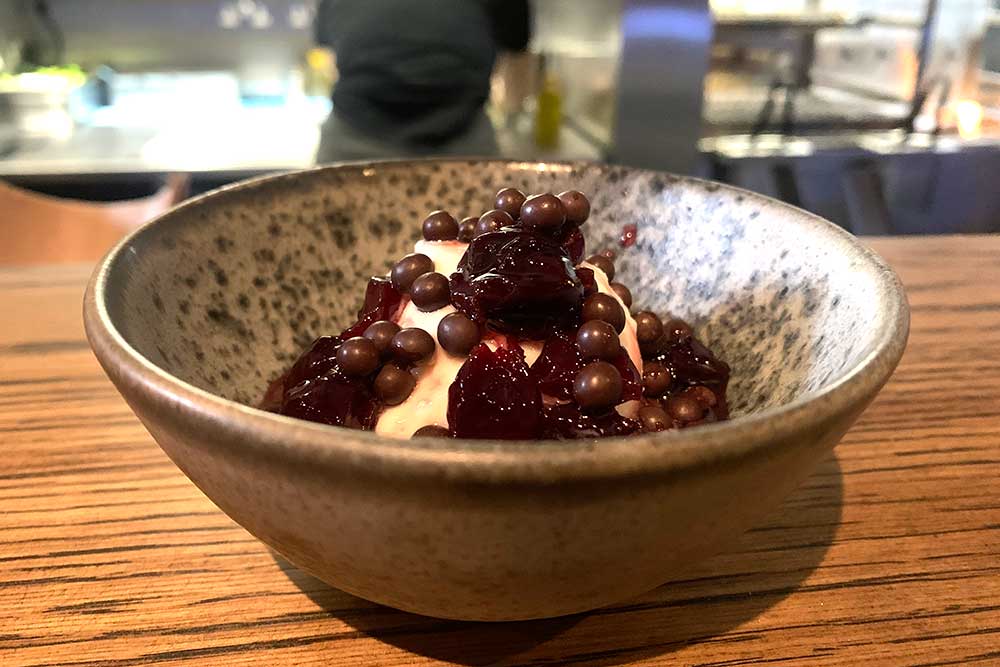 The first is the Kaimaki ice cream with chocolate and sour cherries (£6) - the ice cream is made with mastik, giving it a distinct pine scent. 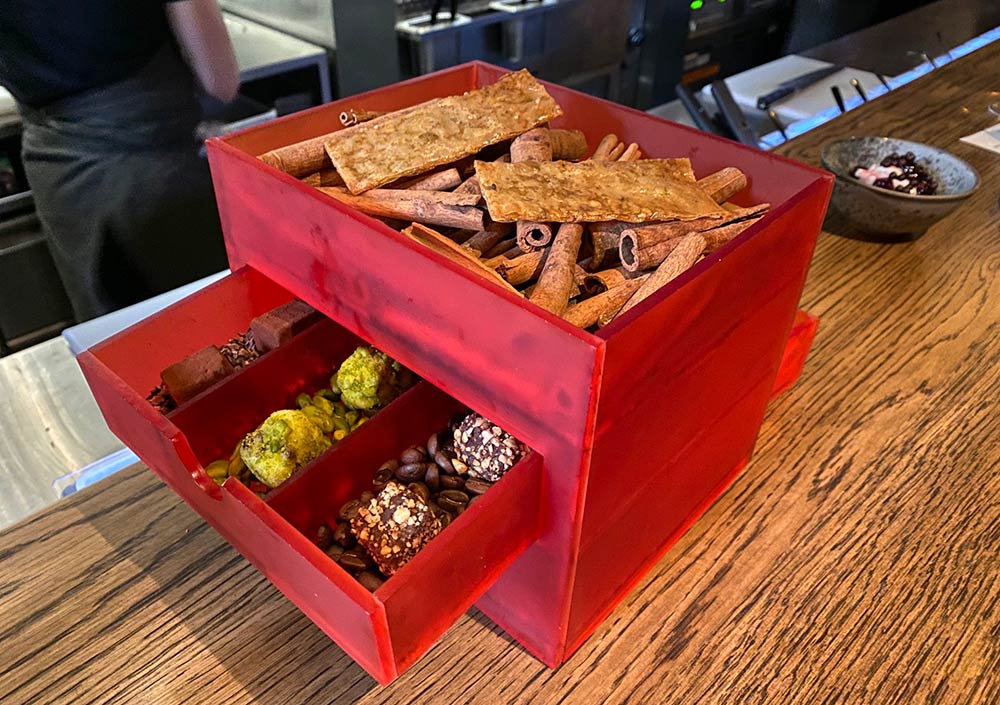 The red box (£11 per person) - a treasure trove of dessert items, this fun dessert includes sea salted caramels where even the 'plastic' wrapping is edible.

As a 'gastrobar' INO prides itself on the variety of its wine list, all of which comes from Greece and is all available by the glass or bottle. We had a particularly wonderful Assyrtiko from Santorini, but there's no getting away that prices are really quite punchy for this part of town, The cheapest bottle is £39 and most is in the £50-£60 bracket - we do think they really need to have an entry wine at a lower price. That said, the quality is there and you'll really get an opportunity to try some wines you may not have heard of before.

Carnaby is becoming the kind of place you could have a quite epic restaurant crawl - popping into places for a glass and a dish. INO is a particularly good addition to the area, as it offers something quite different and exciting. Their chef is turning out some exquisite small dishes here that you need to come and try.

Where is it? 4 Newburgh Street, Carnaby, Soho, London W1F 7RF