[SIGPLUS_EXCEPTION_SOURCE] Image source is expected to be a full URL or a path relative to the image base folder specified in the back-end but /blog/2014/perfectionist-test/gallery/ is neither a URL nor a relative path to an existing file or folder.
0
Shares

Heston at Heathrow - we Test Drive the Perfectionists' Cafe 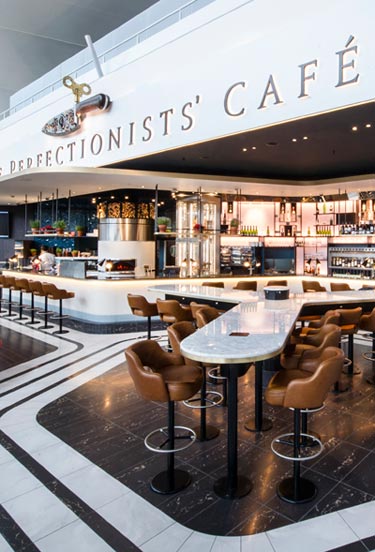 What can you tell me about The Perfectionists' Cafe?

The Café takes its cues from Heston Blumenthal's Search for Perfection TV series and that apostrophe at the end is to indicate that it's the customers looking for perfection here. Or, slightly more down to earth, people who are looking for decent food in a UK airport - often a culinary wasteland.

So what kind of food can we expect? Snail Porridge to go?

Not with this particular restaurant, which has its sights on the everyday traveller. It's an an all-day restaurant with more traditional fast-food staples, but done with more flair than usual. So there's traditional porridge for breakfast, for example, but no snails in sight. However, there are certainly a few Heston flourishes along the way.

It's in the latest terminal at Heathrow Airport, Terminal 2 - aka The Queen's Terminal. The restaurant is after security, so you'll have to be flying with one of the Star Alliance airlines if you want to eat at the café. So that's United Airlines to start and they'll be followed by Lufthansa, Aer Lingus, Air Canada, Singapore and many others. To check out when an airline starts flying from there, head to the Heathrow website.

Once you're through security, you'll have no problem finding the Café which is on the upper floor and has a large clockwork knife above the bar.

So if I've got a flight to catch, won't a meal at the Café take too long?

They're aiming to take around 11-12 minutes for each order, so there should be plenty of time to stop by. For instance, the pizzas in their fancy wood-burning oven should take around 60-90 seconds to cook. We'd still say it's worth leaving a little earlier for your flight if you've got your heart set on a meal here as we think it'll easily be the most popular restaurant in the terminal.

And what should I be ordering?

The all-day menu takes in breakfast, sandwiches, fish and chips, pizzas, burgers, salads, smoked salmon, charcuterie and the all-important nitro ice cream. We worked our way through a large chunk of the menu in our pre-opening visit and would recommend quite a few things (and it's all pretty good value too).

There's loads more on offer - check out the full menu in the gallery below.

That's where Heston's inner-Wonka really kicks off with the custom-made nitrogen ice-cream machines taking pride of place at the front of the restaurant. They billow out vapour clouds as the ice-cream is created in seconds and will be the main draw (but aren't made to take away).

You can get three scoops for £5.50 with a choice of three toppings from a huge list that includes popping candy, dulce crunch pearls, Oreo cookies, chocolate shavings, crystallised rose crisps and more. If you are short on time, then you should at least pop in for one of these.

The drinks also feature a surprise or two and a bit of theatre - particularly with the "Cloud Pourer" cocktails, which see some classic cocktails flooded with a cloud of vapour - A bramble with a merlot cloud (£8.50) or a Rob Roy with a cavendish tobacco cloud (£11.50). Alas we couldn't try these at the time (pre-opening Heathrow rules).

Otherwise, the short wine list isn't the cheapest we've seen (starting at £28) but as it offers a good selection in an airport we'd happily take a higher price point for a decent wine list.

The Perfectionists' Cafe will clearly be the biggest draw at Terminal 2 for some time. It combines good food at a particularly good price for an airport, while still retaining touches of Heston's eccentricity throughout. If you're heading to the terminal, we'd recommend leaving a little bit earlier and putting the place to the test - at the very least sampling the nitro ice cream. It's another winner from Heston and we wouldn't be at all surprised to see more of these turning up at airports all over the globe.

Prices were correct at the time of writing. Hot Dinners ate as guests of The Perfectionists' Café.