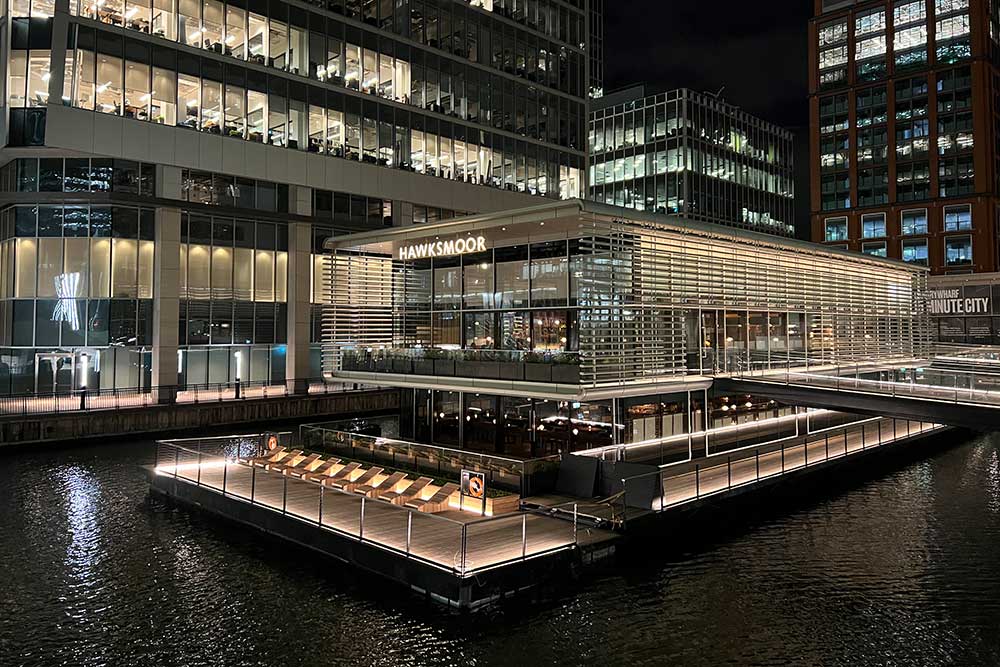 The floating Hawksmoor Wood Wharf in all its glory

What can you tell us about Hawksmoor Wood Wharf?

It's the first new opening from Hawksmoor in London since their Borough Market restaurant (although they have managed to open a restaurant in New York in the meantime). They're best known for their great steaks and indeed were instrumental in the new wave of great UK steakhouses. For this new opening, they've gone east and opened up their latest restaurant in Canary Wharf.

And this one is actually on the water?

It is indeed. It's in the Wood Wharf section of Canary Wharf, just a few minutes from Canary Wharf station (make sure to leave out of the back entrance of the station). The whole restaurant is literally floating on the water. Note that it is moored in place, so don't be expecting it to be swaying about. it is an undeniably impressive (and pretty unmissable) sight and visiting the restaurant is almost like getting on board a Hawksmoor cruise liner, gangplank and all. 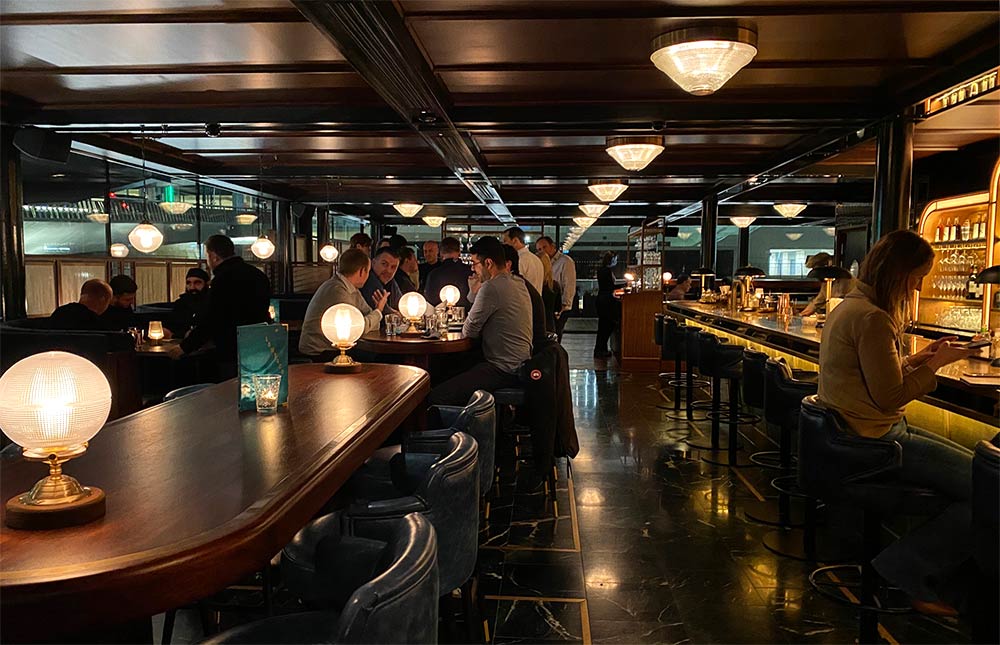 Downstairs at The Lowback

The whole affair is laid out a little differently from their others?

Aside from the whole floating on water thing, it's all clearly something of a different beast to what's come before. For starters, the whole of the downstairs (or below deck, if you will) is taken up by the bar, called The Lowback. It's bigger than any of the Hawksmoor bars so far and is clearly going to be a huge draw for the city folk (it was already nicely busy in a week where the City was supposedly "working from home").

Not only that, but there's a lot of space surrounding the restaurant that can be used for terrace and alfresco dining and drinking. Come summer, that will be the place in Canary Wharf where you'll be fighting for a table. 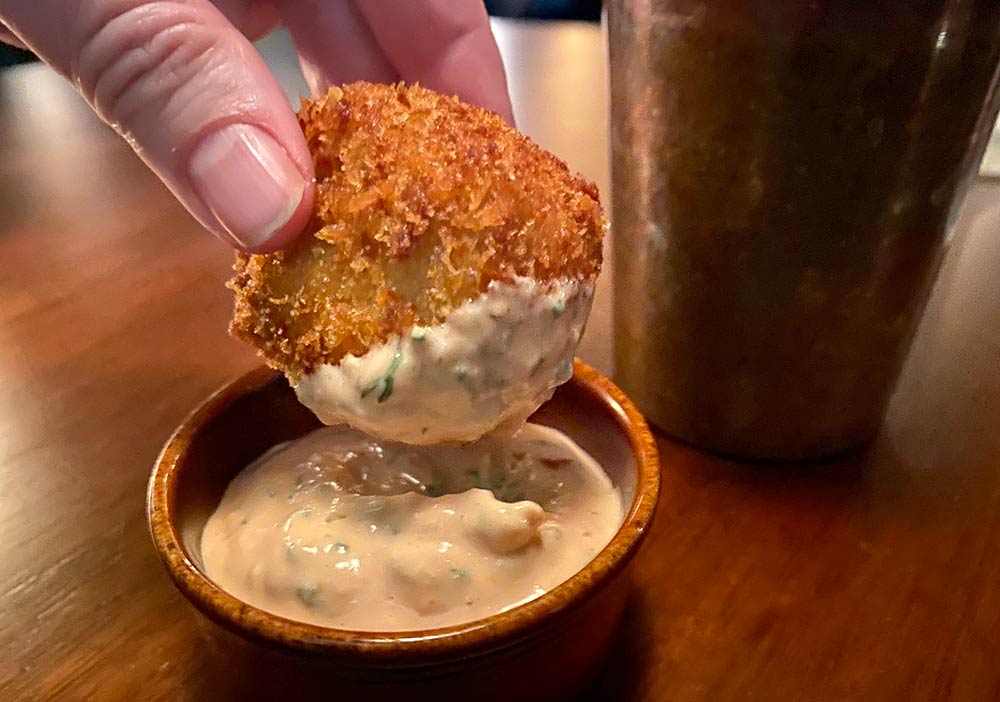 Dipping the salt beef nuggets in Russian dressing at The Lowback (they're £7.50)

Does the bar have a separate menu?

it does - some dishes are taken from the main menu like the roasted bone marrow oysters and others are unique to the bar like the salt beef nuggets with melted Ogleshield inside (above) and langoustine scampi.

Upstairs is the restaurant?

Yes, that takes up the whole of the "ground" floor, as well as a mezzanine area where you'll find their private room (which seats 20). There's also more bar space here if you want to grab a drink before your meal but can't get into the bar downstairs. 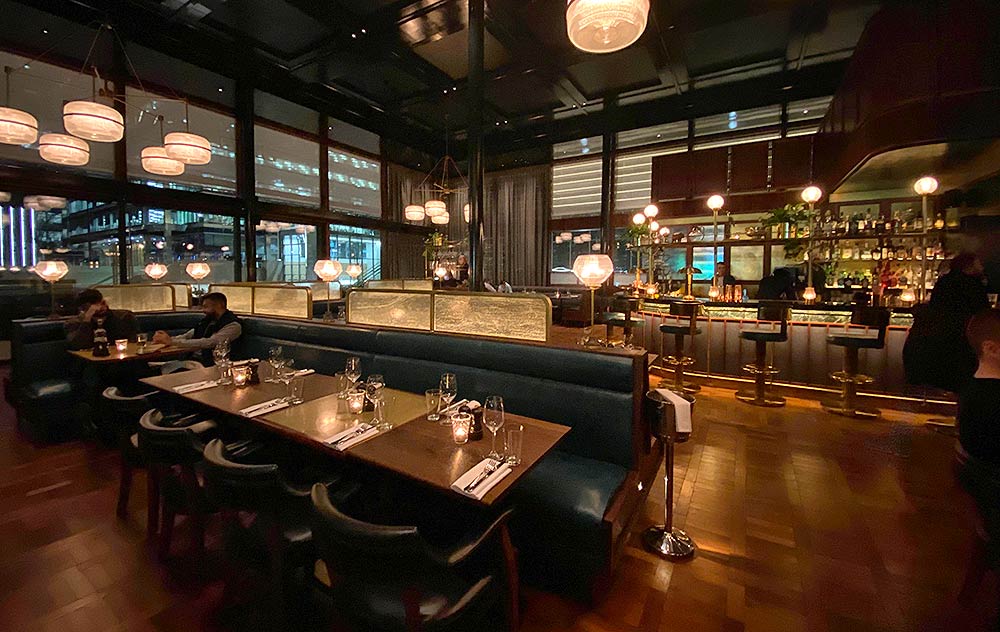 Upstairs is the main restaurant (this is about half of the space). Ideally, you'll want a table out to the left, looking out onto Canary Wharf. We were here for a very early dinner and the place was packed by the time we left.

Onto the food - what can we expect?

Obviously, the steaks are the main draw here at Hawksmoor. Expect British bred beef on the menu throughout, all aged for 35 days, along with seafood that's supplied by both local fishermen and from Brixham Market (organised with a little help from chef and restaurateur Mitch Tonks). As with their other restaurants, you can choose larger cuts like a porterhouse or T-Bone by size (ask your waiter to find out what's still available) or choose a cut like sirloin or ribeye at a set weight from the main menu.

This is not our first rodeo when it comes to Hawksmoor and from previous visits we'd definitely recommend the potted beef and bacon with Yorkshires, the bone marrow and onions, and the old spot belly ribs.

As for this visit, here's what we went for: 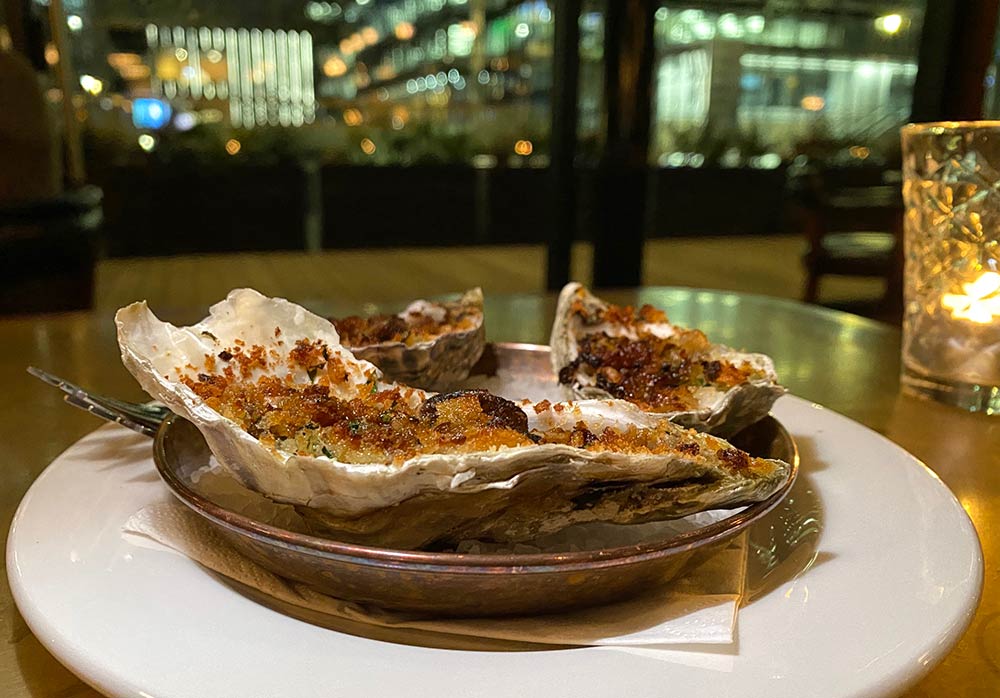 Kicking off with roasted bone marrow oysters - first introduced in Hawksmoor New York and finding their way across the pond to Wood Wharf too (£9 for three, 18 for six). You can also have the oysters natural or with Scotch bonnet mignonette but these are GREAT. 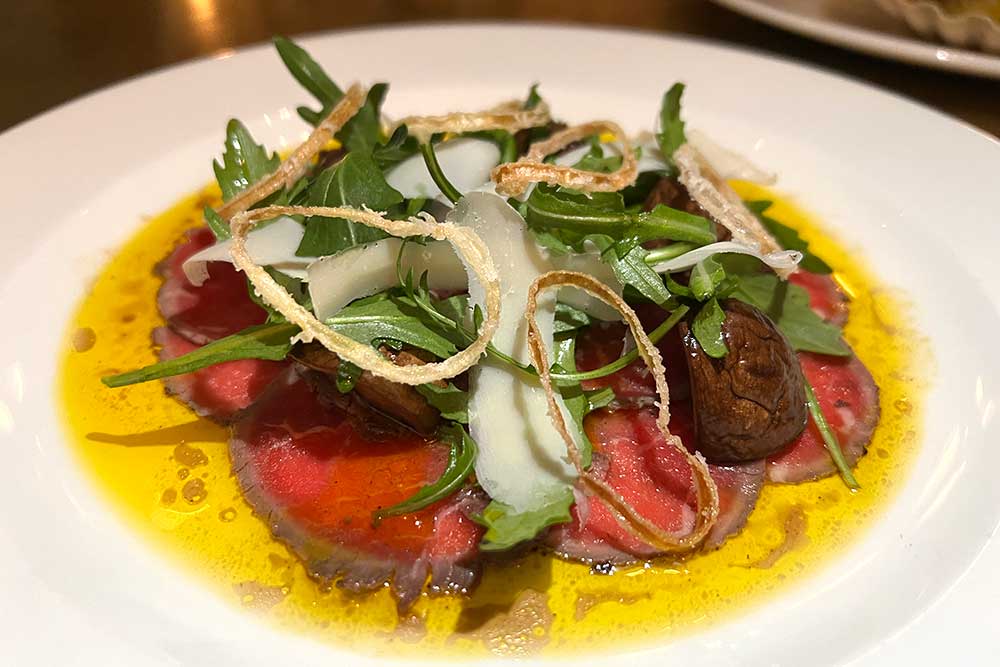 Fillet carpaccio with pickled chestnut mushrooms & parmesan (£13.50) - this is, believe it or not no filter. A gorgeous dish, and a light option if you're going big on steak and seafood later. 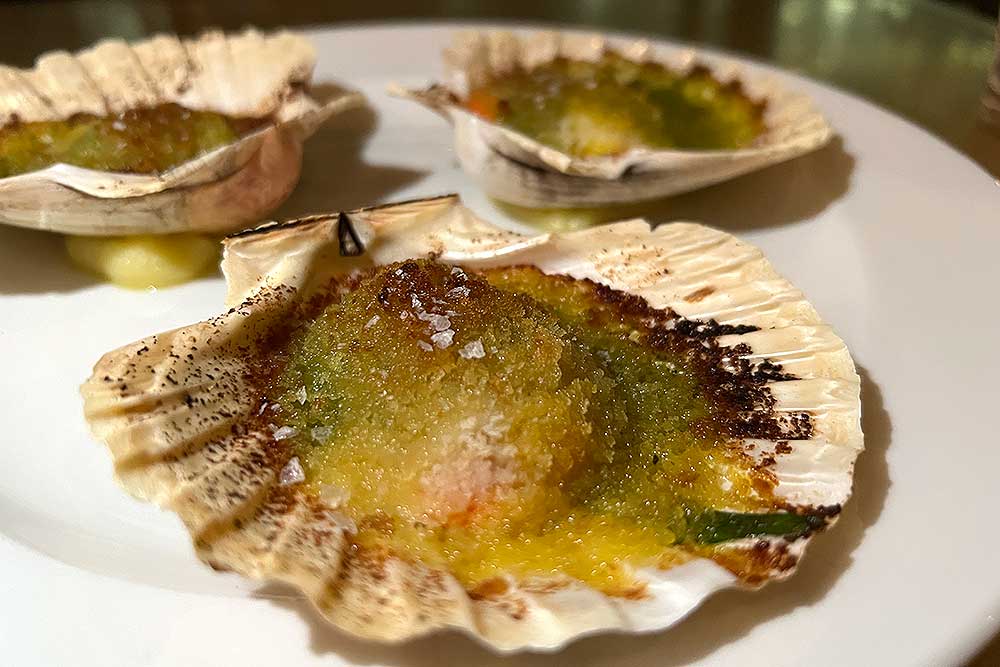 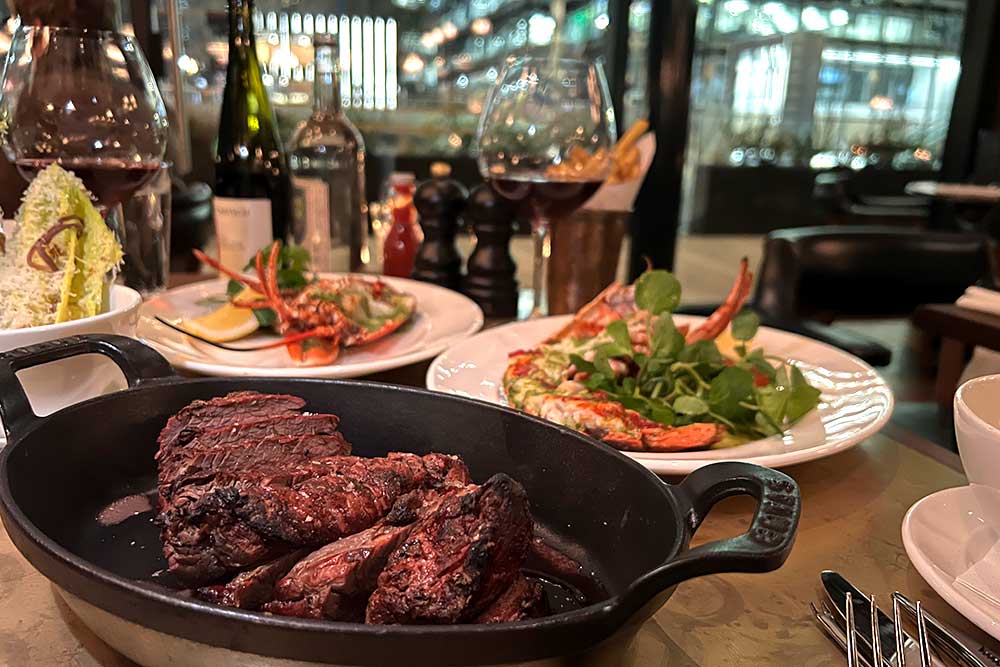 And for the main event, we went with surf and turf - Chateaubriand (£14.00/100g) paired with whole native lobster with garlic butter (£7.00/100g). Excellent steak as ever and it's all paired with the beef dripping fries (£5) and Hawksmoor caesar (£4.75) that you can see lurking in the background.

The sides at Hawksmoor are almost as important as the main event. And there's one more dish we didn't try on this occasion but did when we popped into Hawksmoor Guildhall late last year - the Tunworth mash (£8). If you are yet to try this, it's a must-order.

After all that, you'll need a few moments to gather yourself before heading onwards with dessert. There are some classics on here, like one of the best sticky toffee puddings in town, but we have to admit that we would like to see a greater choice of light desserts on the menu. That being said, we went for... 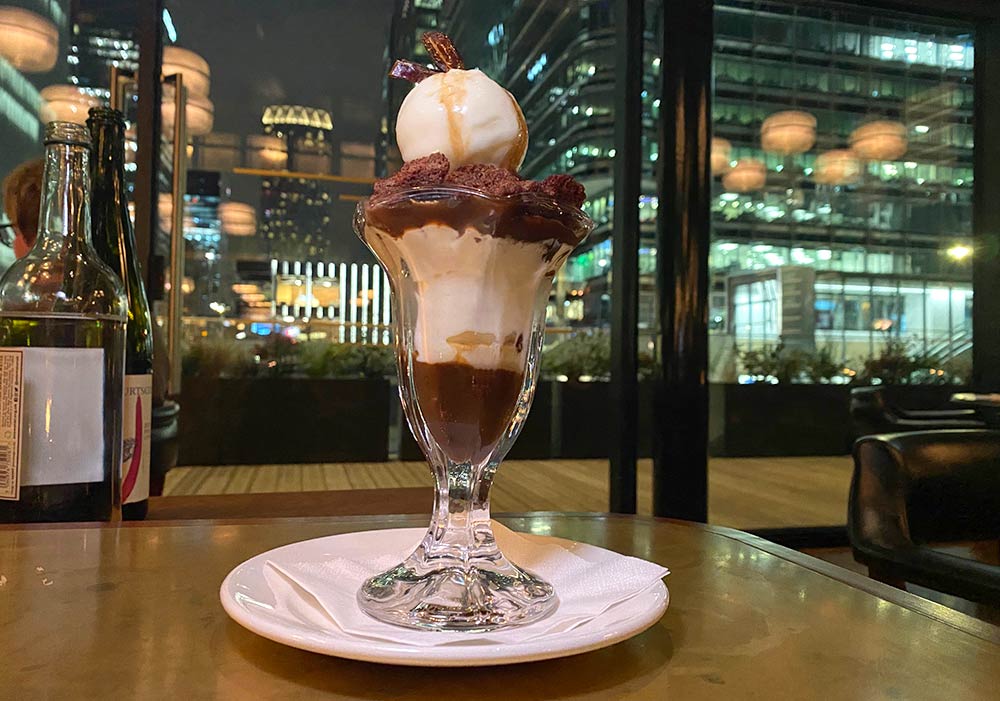 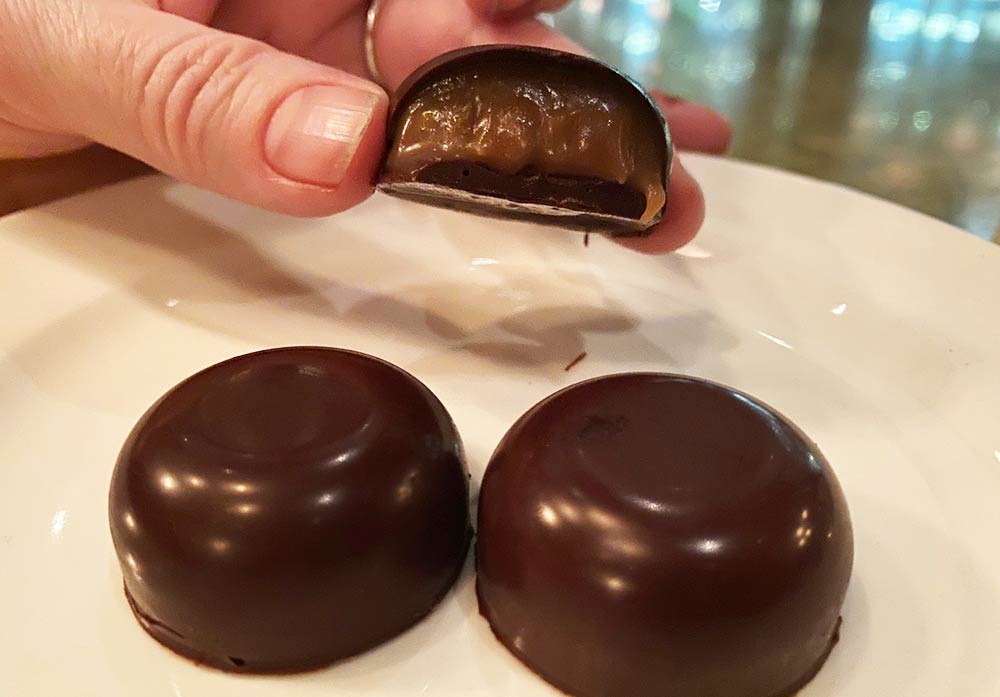 And we don't think a dinner at Hawksmoor is finished until you've had some of their salted caramel rolos (three for £5 or get a box of eight to take away for £11).

The wine list starts at a pretty affordable £28 for white and £31 for red, which compares well to elsewhere in town. However, there will be more than a few City big spenders at Wood Wharf and there's plenty on the menu for anyone splashing out, including magnums of Palmer & Co Champagne at £640 and a reserve list that starts at £115 a bottle and heads up to a stratospheric £1,600.00 (that's a Chateau Cheval 2000, if you're interested).

As much as they're known for their steaks, Hawksmoor cocktails are also among the very best in London. From classics like the Shaky Pete’s Ginger Brew (described as "somewhere between homemade ginger beer and shandy, with an added gin kick" or a personal favourite, the Fuller-fat Old Fashioned (Woodford Reserve Bourbon, Salted Brown Butter, Tonka Bean) it's hard to go wrong here. 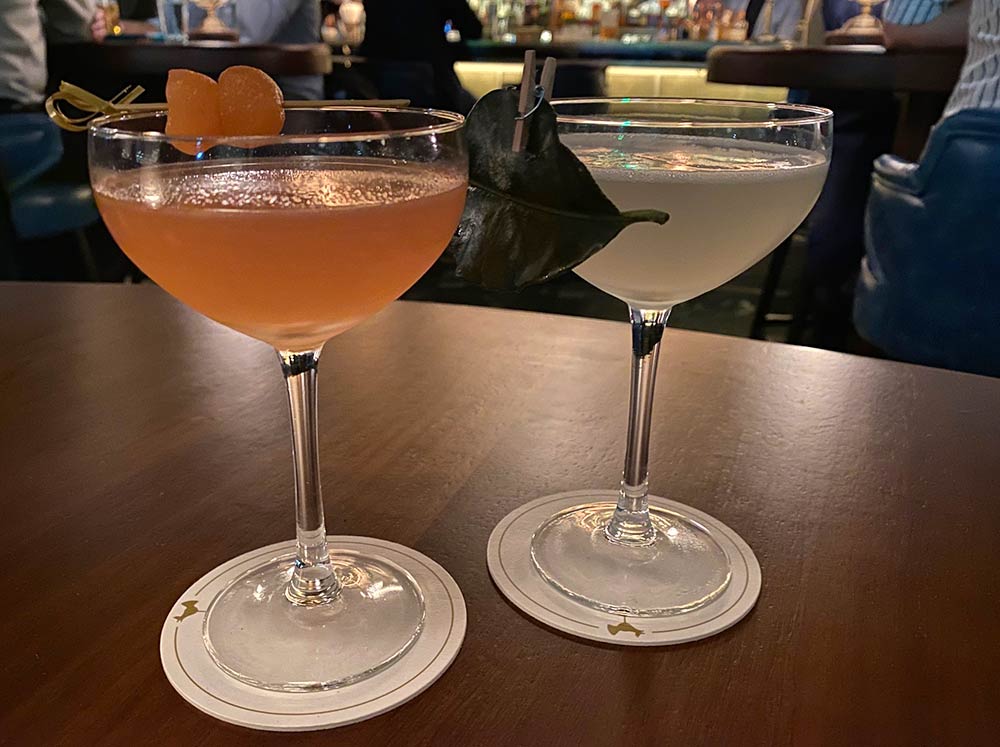 Hawksmoor Wood Wharf is definitely a restaurant with a wow factor - there really is nothing else like it in town right now. Even if you're just passing through the area, it's worth popping down for a look. Combine this amazing looking restaurant with the great food, drink and service that you've come to expect from Hawksmoor and it's clear they're still at the top of their game. It's already very hard to get a table towards the weekends, but do persevere as it's 100% worth it.

Hot Dinners ate as guests of Hawksmoor. Prices are correct at the time of writing.