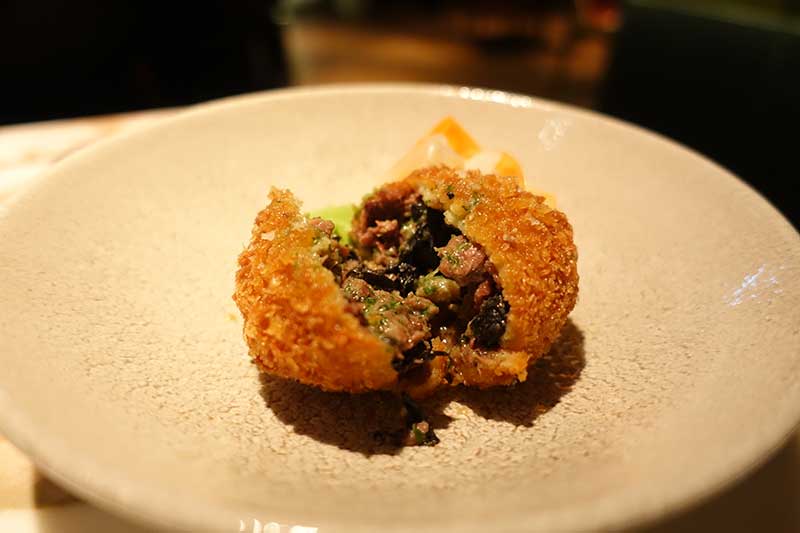 Short rib kiev with pickled carrot salad (£8). Because who can resist a Kiev at the best of times, let alone a short rib version? Top marks for the salad with pairs well with the beef.

What can you tell us about Gridiron?

It's the new restaurant at the Como Metropolitan in Mayfair, taking over the space of The Met Bar. That was once one of the hottest bars in town, and the place to spot celebs in (we once saw Posh & Becks there back in their matching outfit days). Things have moved on and the new restaurant is a mix of food, cocktails and wine - bringing in some of the best talents in the city to look after it.

On the food front, the menu is being overseen by Richard Turner (of Hawksmoor) and the Head Chef is Colin McSherry who was previously at Nuala in Old Street. Over on wine duty, The Guardian's wine writer Fiona Beckett is behind the list - with the restaurant's sommelier Lucy Ward looking after the secret "under the counter" list - so be sure to ask about that. And in charge of the cocktail list is Max and Noel Venning of Dalston's Three Sheets (one of our personal favourite bars in town).

So it's a damned good team all round.

If you haven't been to the Met Bar before, it's on Old Park Lane, just off the bottom end of Piccadilly. Hyde Park Corner is your nearest station, but it's only a five-minute walk to Green Park too. There's a separate entrance to the restaurant that we almost missed - to the right of the main hotel entrance. 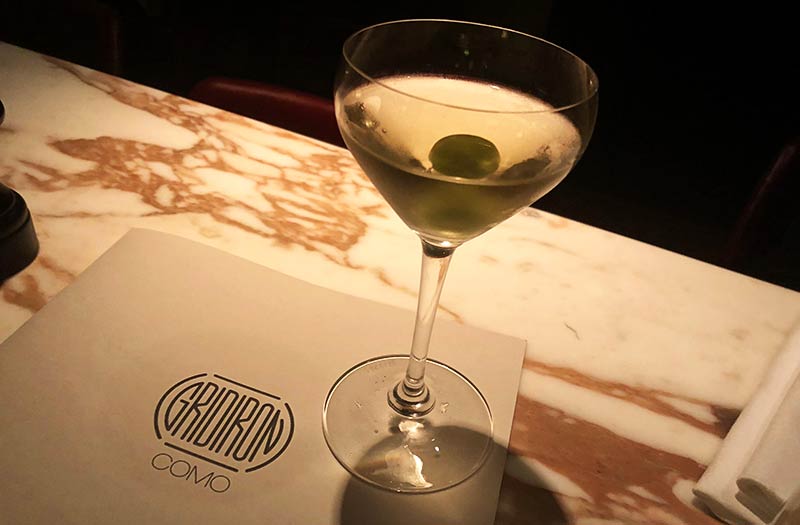 So where should we go for a drink first?

If you're not coming to the bar - and we think you should, we'll get to that in a bit - then there are a few good cocktail spots locally. The most obvious is downstairs at HIDE - their Below cocktail bar is worth a visit (but it does get full quickly). We're also fans of the Shepherd Market Wine House and, for a pretty spectacular view, head next door to the bar at Galvin at Windows.

But it's well worth arriving early for a pre-dinner cocktail at Gridiron. As expected, given the people behind it, the cocktails are exceptional. The cocktail list features many recognisable drinks - Harvey Wallbanger, Bloody Mary - but you can expect very distinct takes on them. The White Russian (£13.50) came out top for us. It's Absolut Elyx, coffee, miso and clear milk. So yes - it has that distinct taste of a White Russian - but is a completely clear cocktail. It's also worth pointing out that there are a few more cocktails on the main menu - with the fino martini (£9) being an excellent sherry/martini mash-up (see above).

We do think the actual bar space could be punched up a little though - a little more consistent lighting could make the area a more attractive spot to perch.

Are there bar snacks?

There are snacks - but they're only listed on the main menu, so make sure to ask for that if you're in the bar area (they really should add the snacks to the main drinks list too). And it's a pretty good selection - with crispy fried scampi and pigs head and black pudding croquettes on the menu. But here's what we had on the night: 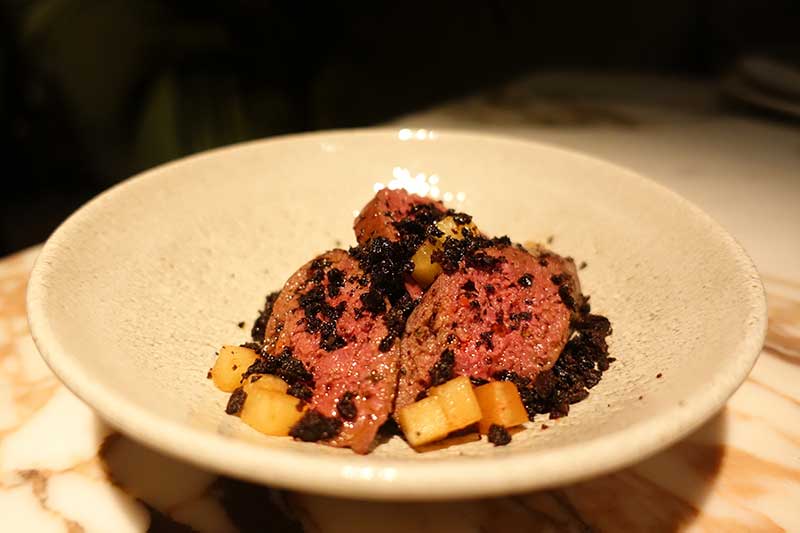 Grilled duck sausage with black olive and plum (£8) with the sausage made in-house. 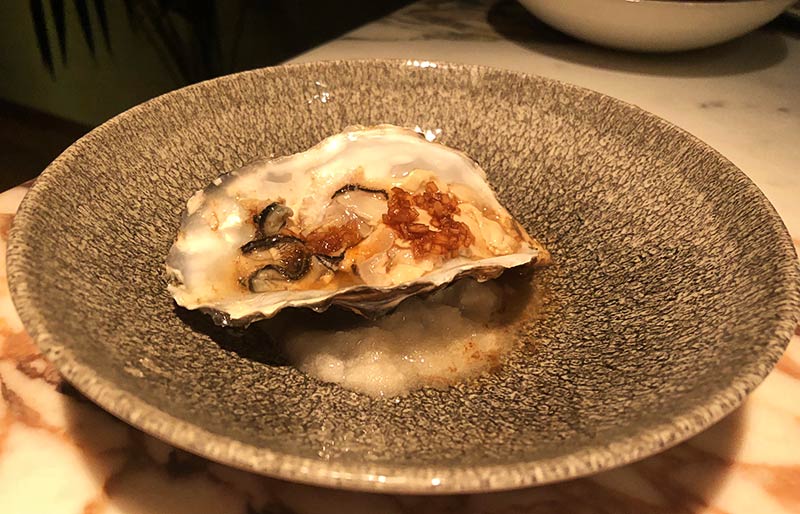 And what about seating?

The rest of the space is a pretty standard layout - with plenty of space between tables. We did like the look of the counter - right up where all the chef action is happening. We'd definitely choose that on a return visit.

Onto the food - what's on the menu?

The menu does have shades of Hawksmoor on it, which is probably inevitable given the involvement of Richard Turner, and also of Nuala, but at the same time, it represents a slight shift away from those restaurants too. The starters list is the biggest departure and reads very well, with dishes like "Smoked beef shin, smoked eel and watercress ailoi" and "burnt leeks, hazelnut aillade and brown butter".

We opted for the following: 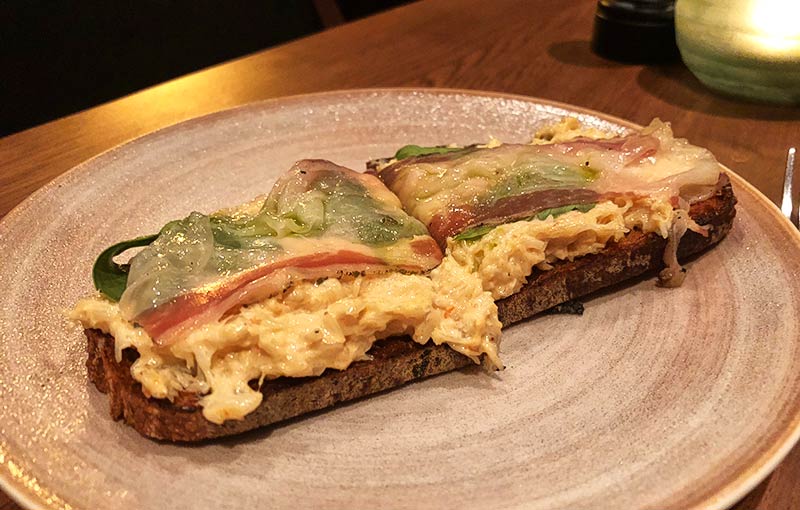 Crab on toast with lardo and loveage (£14). In case you're wondering, crab on toast is condiderably elevated by the addition of lardo. One of the best dishes of the night. 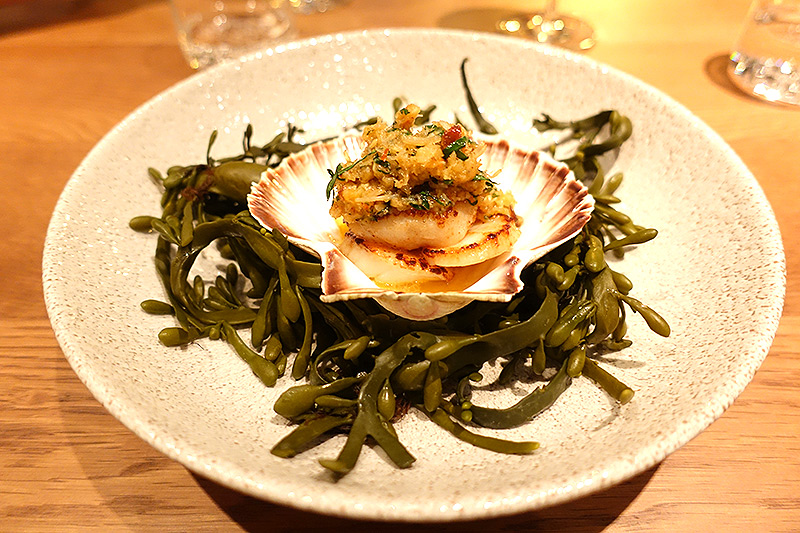 Wood roast scallop with bone marrow XO (£12) - a pile of scallops with a punchy, meaty topping.

As for the mains - they're broken down into seafood and vegetables, steaks and chops. So it's strongly meat and fish-focused with a sole veg main at the time of writing (albeit one that does sound very good indeed): "artichoke, ratte potato and pecorino, green sauce and winter truffle (£20).

On the seafood front, there were roast turbot, red mullet and Dover sole meuniere dishes - but we stuck to the meats. The Dexter Prime Rib for two to share (£85) WAS tempting - but instead, we had: 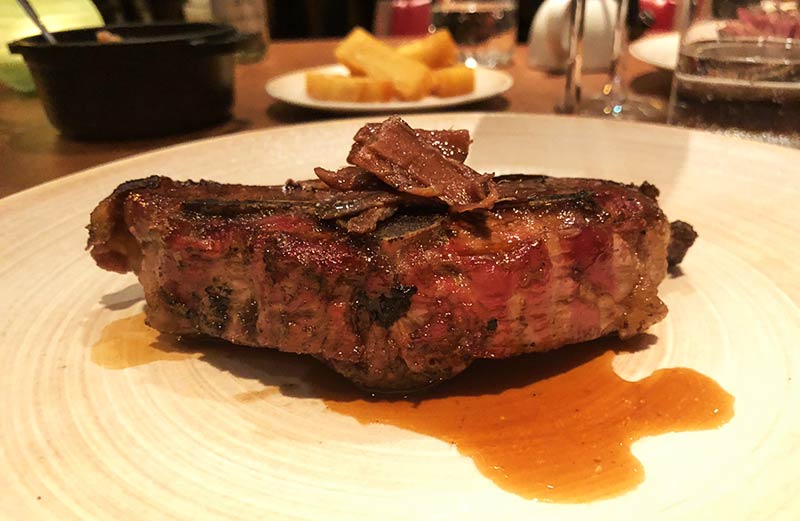 Barnsley hogget chop (£28). Something a little different from the average lamb chop and much larger, of course. Well aged and something that is a welcome alternative to steak. 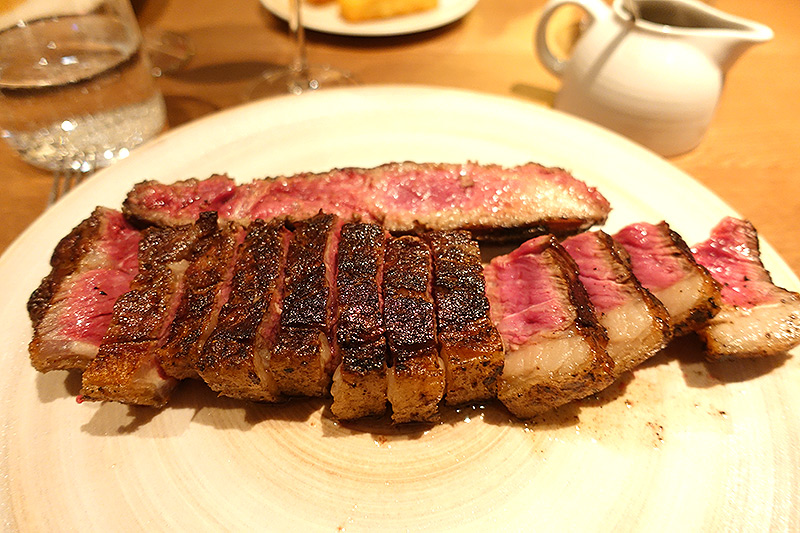 Highland sirloin on the bone (£34) - but if you are having the steak, this is clearly the one to go for. Just LOOK at it.

And you'll absolutely want to allow for the sides - our faves were: 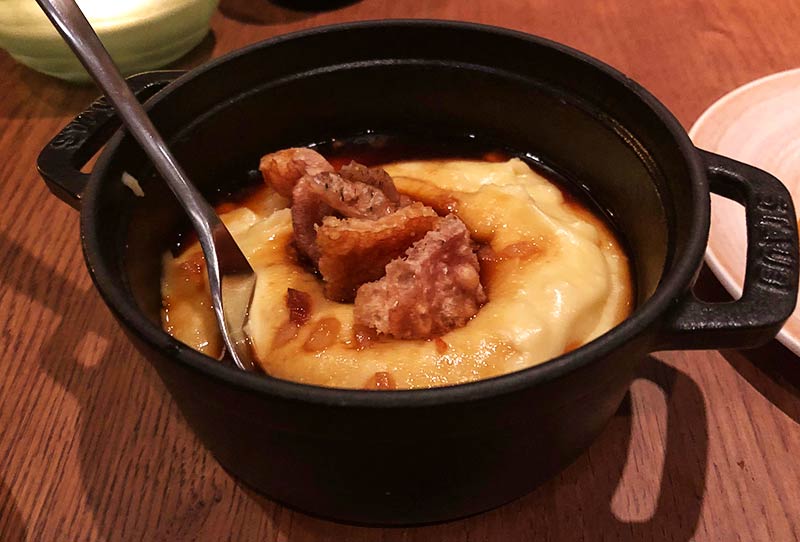 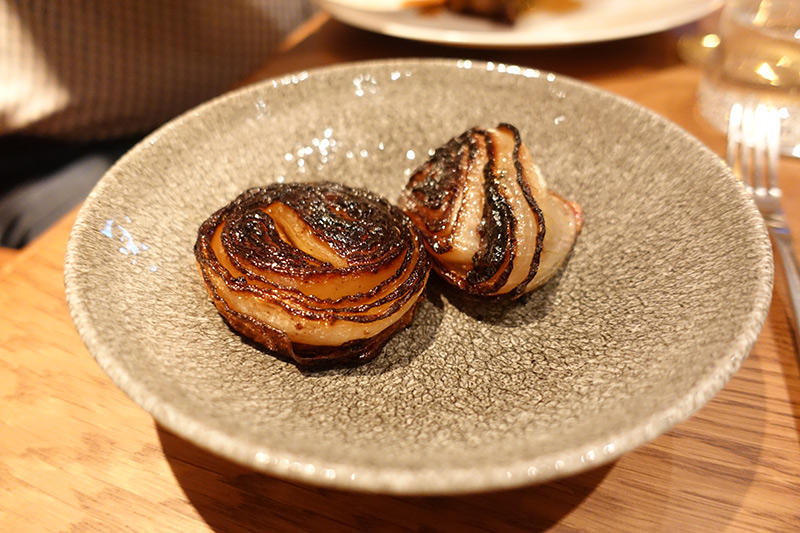 Roscoff onion fondants (£5) - slow cooked, almost sweet onions. We also had the beef dripping galette potatoes (£6) which were also unmissable (but the portion size on those could be increased).

Save some space for the following - but also look at the savoury section. If we hadn't slightly overdone it on the previous courses, there are two dishes here which stand out. First off is the baked Tunworth for two to share (£25) but also one of our favourite snacks - devils on horseback (bacon wrapped prunes - £7) alongside a cheese plate. So if savoury is more your thing - bear this in mind.

As for the desserts we chose: 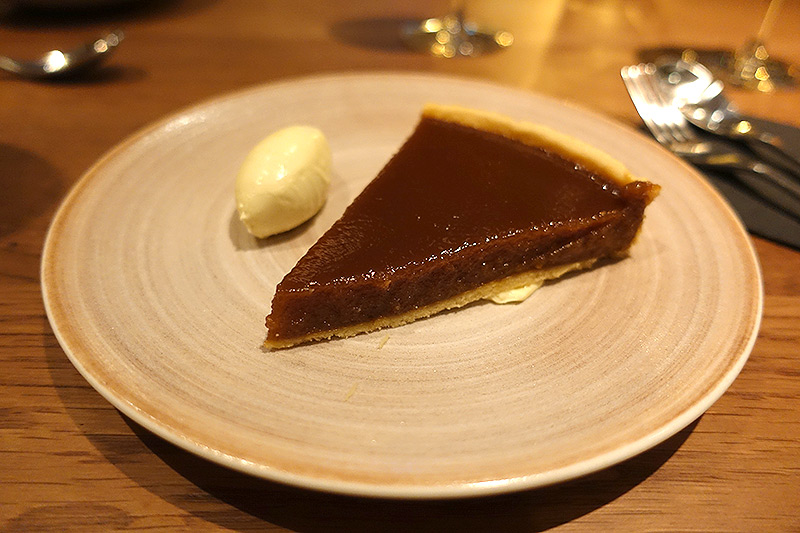 English honey tart (£8) - a good tart that, alas, could really have benefited from being left to set just a wee bit longer. We're sure they'll perfect this. 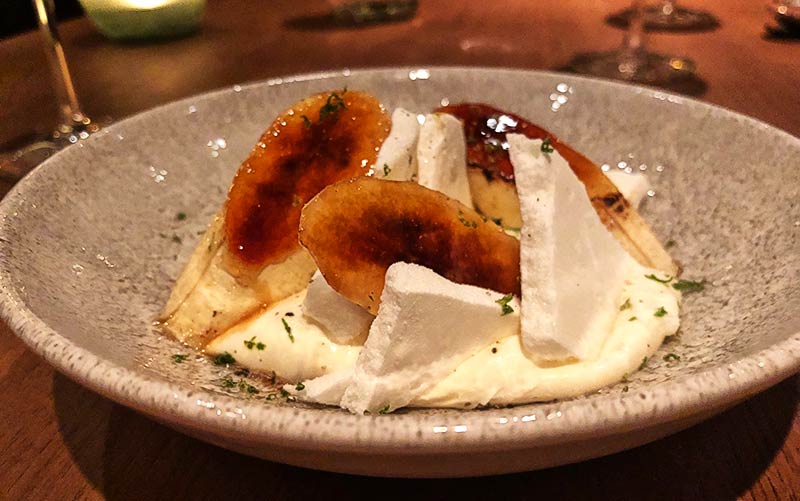 And how about wine?

Obviously, wine is important, given Fiona Beckett's involvement. She brings her touch as a food writer into the wine list - so wines are helpfully broken down into headings like "focus on Chablis/Grenache", "Pinot and Friends", "Racy whites/rose" and more. So it's easier than usual to both find your particular taste as well as discover something new. Glasses are 125ml (something we're never going to be supportive of - we always like a 175ml option), and prices start at £29 for the house white (Portuguese vino verde - Azevedo 2017) and house red (Telmo Rodriguez from Alicante).

We'd also say you should put your hands in the sommeliers here too - giving them a price bracket, of course. We kicked off with a glass of particularly good Pecorino (£7) and one of us had a really good Daniel Bouland Cote de Brouilly (£9) Beaujolais with the steak.

The Met Bar space was in definite need of a revamp - and they've definitely brought in an impressive team to bring it to the next level. It was early days on our visit, but the team is delivering a strong menu and the drinks are top class too.

Hot Dinners dined as guests of Gridiron. Prices are correct at the time of writing.