Written by Felicity Spector
Created: 05 May 2015 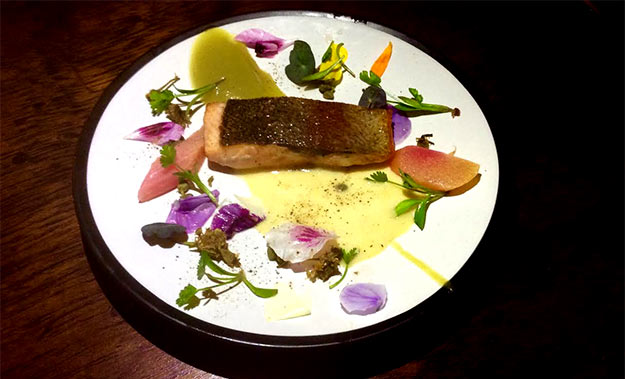 What's it all about?

Grain Store Unleashed has taken over the old Bistrot Bruno Loubet space at the Zetter hotel, for a limited time only (although how long is yet to be revealed). It's aimed at taking the vegetable-inspired cooking at Bruno Loubet's Kings Cross restaurant to what the chef calls "another level".

There's an a la carte menu at lunch and set menus for dinner: meat and fish make only fleeting appearances, if at all. It's the latest stage in Loubet's journey away from the traditional French bistro style he was known for: he says he wants to take risks, and "show what can be done with vegetables." Judging from our visit, it's a total triumph.

Where should we drink first?

Just across the road is the gorgeous Zetter Townhouse, with a cosy cocktail bar featuring drinks by the award winning mixologist Tony Conigliaro. Or in nearby Clerkenwell Close, it's hard to resist the charms of the Three Kings pub. And for a unique taste of old Clerkenwell, there's the beautifully preserved Jerusalem Tavern in Britton Street, with a range of organic beers.

This is a large, bright and open dining space - we like the tables beside the floor-to ceiling windows for maximum light, but there's a real buzz from sitting next to the kitchen and seeing Loubet and his team of chefs at work.

Quite simply: breathtaking. We chose the eight course tasting menu - fantastic value at just £39, and every dish left us gasping with delight. It's almost impossible to pick out our favourites, as there wasn't a wrong note on the menu - but standout plates included:

There's a list of interesting, seasonal cocktails, including a rhubarb negroni and a fig daisy: we tried a hay butter champagne (£9.50) - a dry, refreshing glass with just a background hint of toasted butter and hay liqueur. There's also a list of non alcoholic juices, if you fancy a chamomile lemonade or a ginger bread iced coffee.

This has to be one of the most innovative ventures of 2015: truly outstanding cooking, unique combinations of flavours and textures which have all been cleverly judged and beautifully composed. Even after eight courses this was a meal we didn't want to end: and since it was almost all vegetarian we didn't leave feeling uncomfortably full. The concept was originally planned to run for just six weeks but the staff say it's been so well received they're continuing it until Summer. After that, who knows, so our advice is to book now, while you can.