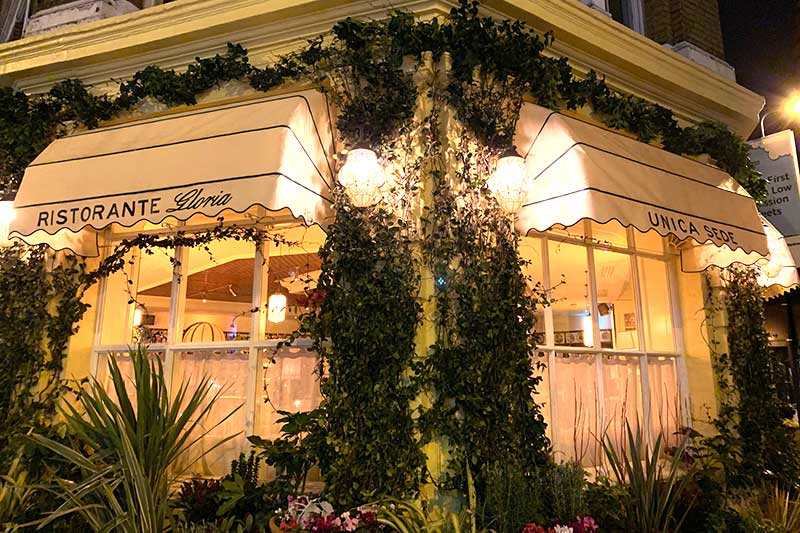 Wrapping around the corner of Great Eastern Street and Charlotte Road, it's hard to miss Gloria.

What do we need to know about Gloria

This is the first London opening for disruptor restaurant company Big Mama Group who currently have six restaurants, two bars and a food court in Paris (and a restaurant in Lille). Over the Channel, they've made a name for themselves, with restaurants where the scene is every bit as important as the food. And they're hugely popular.

They've taken over the old Red's True Barbecue spot on the corner of Great Eastern Street and Charlotte Road and given it quite the makeover. Think 1970s Capri - so that's candelabra, Italian ceramics, plants everywhere and a posse of waiters whisked over from Italy to shout Buono Sera in unison as you come in. Nearest stations are Old Street or Shoreditch High Street. 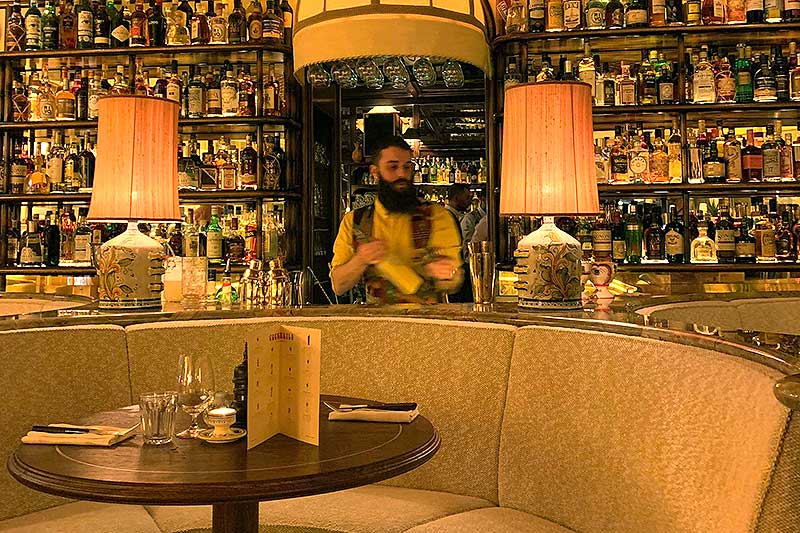 So it's a Lionel then?

Very much a Lionel than a Tony Blair in terms of type of Italian restaurant. No surface has been left unknowingly adorned, but the effect is extremely charming.

Do they have a late licence?

They have indeed. Downstairs from the main dining room - and surrounding the huge sunken kitchen is a late night dining spot - this is more Vegas in tone with lots of brown velour, banquettes and mirrored ceilings. This will be open until 2am at weekends, serving a truncated menu right into the wee small hours. It's going to be quite the scene. 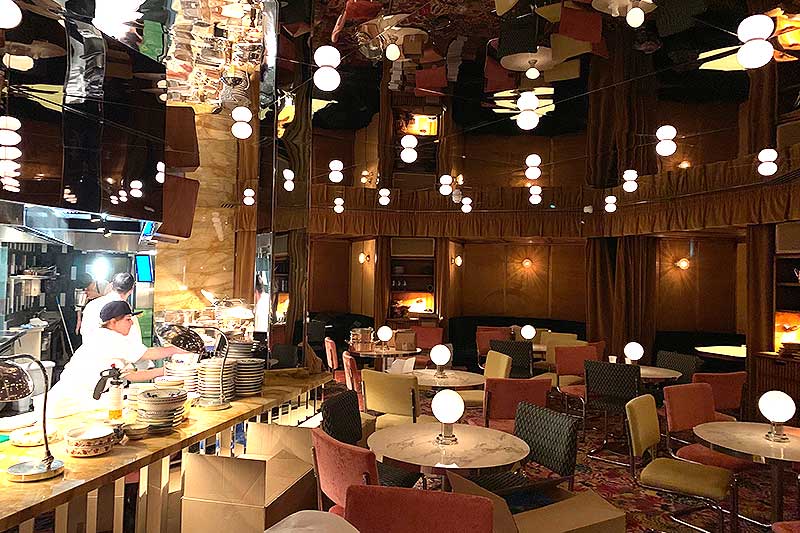 The downstairs dining room - with curtained-off booths around the edges.

Where's the best place to sit?

Late at night - 100%  downstairs. Earlier, there's a lot to be said for the main dining room which has loads of tables suitable for larger groups. Come and bring ALL your friends and family seems to be the idea. We also liked the look of the wine room - a semi-private space with the walls lined with bottles of Barolo and other fine Italian wines.

What isn't on the menu? It covers everything you could want from an Italian trattoria - pizza, pasta, meatballs etc. I

t kicks off with a prodotti section - they pride themselves on sourcing the best of the best Italian ingredients. Choose from prosciutto and cheeses or - if there's a big table of you - order every starter for £65. There are also a few dishes to share like a big cacio e pepe served in a round of Pecorino - (because the law states that you can't now open an Italian restaurant in London without serving cacio e pepe), along with Florentine steak and lobster risotto. 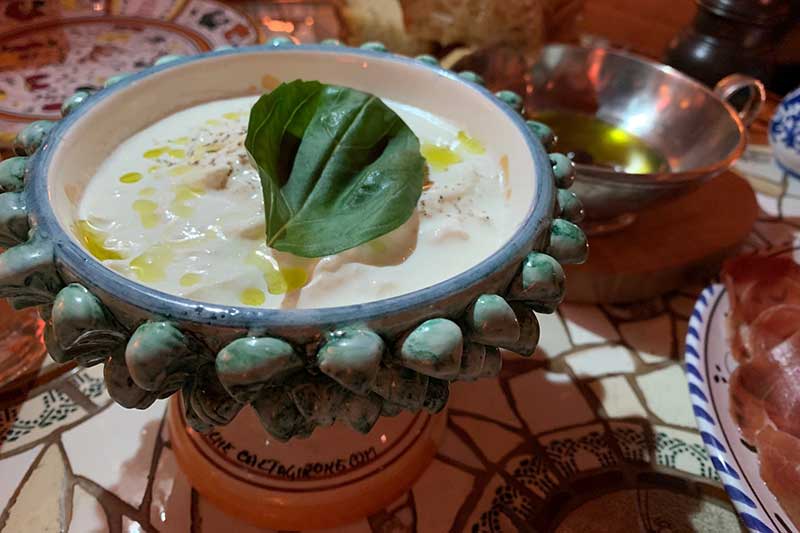 The menu describes this dish of smoked stracciatella (£7) as "bloody godsent". We concur.

From the cicchetti section - deep fried crocche with black truffle bechamel and crispy guanciale (£9) - get these in while your'e trying to work out what else to order. 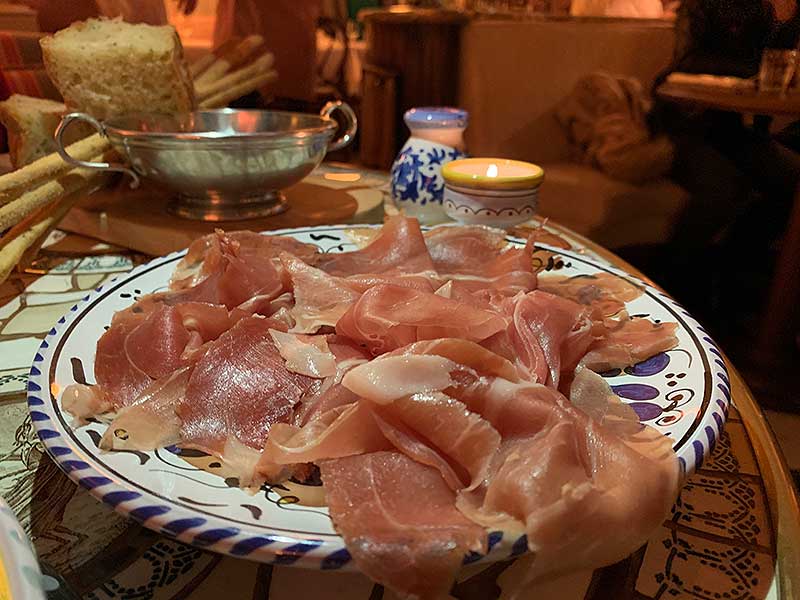 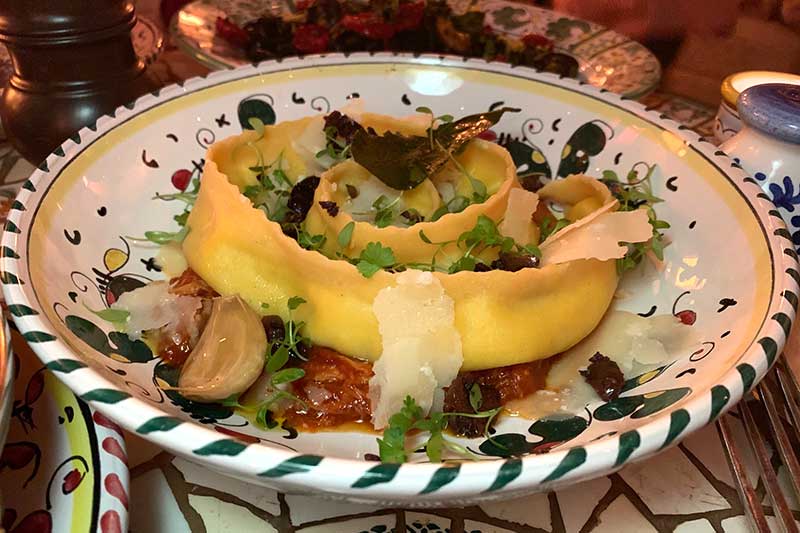 Girella alla cacciatora (£13) - a curl of ravioli stuffed with polenta sitting on top of a wonderful rabbit ragu with candied garlic. 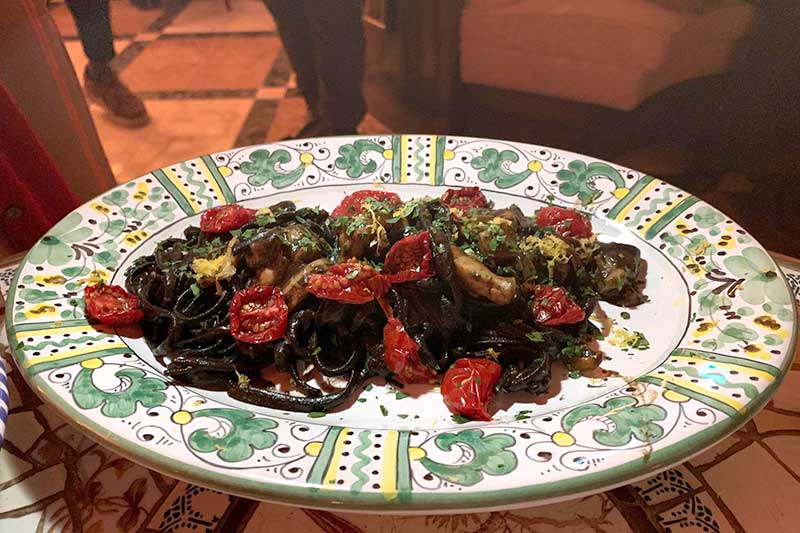 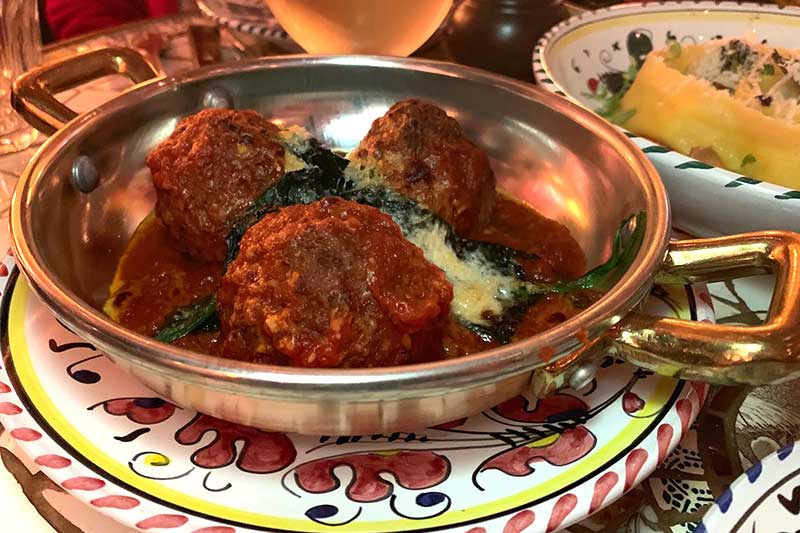 Delicately described as 'Filippo's Big Balls" - these are cooked for three hours in a San Marzano tomato sauce (£17) - rich and really good.

How is it for vegetarians and vegans?

There's plenty for vegetarians - most of the produtti section is cheese and half the pizzas are vegetarian (and could be more if they'll swap out the Parmesan for you). From the main dishes there's a dish called Vegan (De)light - made mer hummus, chargrilled portobello mushrooms skewer with hazelnut, cucumber and purple sprouting broccoli for £12. And several dishes are marked to show that a vegan version can be made for you.

We made the foolish mistake of trusting our waiter when he said he was going to bring a tiny selection of all the desserts for us to try and then brought a mountain of food to the table including a slice of lemon meringue pie bigger than my head and a creme brulee still 'bruleeing' as it was brought to the table. This might kill you. We were tempted to walk the three miles home.

Expect a supersized sugar rush, particularly if you order that lemon meringue pie or giant profiterole.

Definitely consider having a cocktail. Our Colada Me Later (£12) was a giant chalice of colada pepped up with popcorn syrup and delivered set-alight to our table. This is not a subtle drink but it is delicious.

On the wine list, bottles start at £23 for their house Trebbiano or Sagiovese with plenty under the mid £30s range, heading up to just under £100 for a 2014 Brunello. We had a lovely Sardinian Vermontino (£45). There's also a special section of Barolos, so if you've fancied trying a 2013 Barolo Campe from La Spinetta at £239 this is the place to come.

It's been a while since we've been to a restaurant on just its second service to find a place already so full of energy and buzz that it couldn't be anything but a hit. We had waiters falling over themselves to recommend a particular dish or wine because it was from their (and by that obviously the best) part of Italy. The music is great, the food is good and the wine list is particularly worth hitting up (as are the cocktails). Go and enjoy. 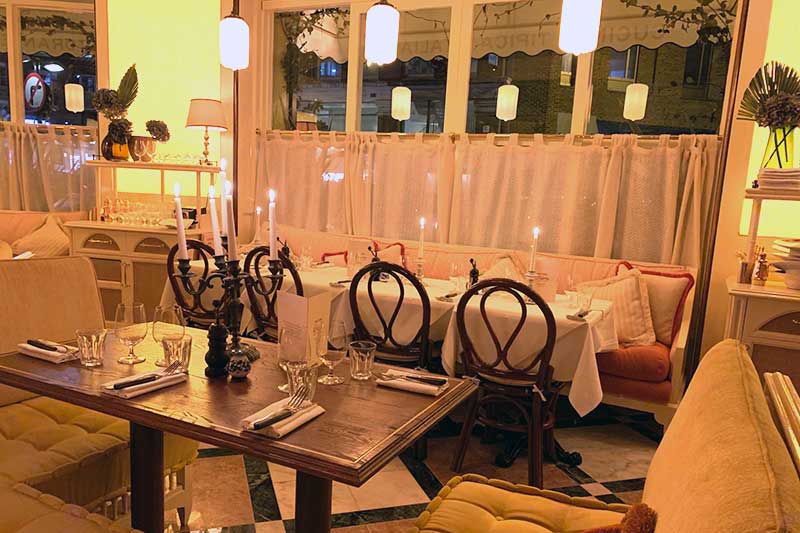 Hot Dinners dined as guests of Gloria, prices are correct at the time of writing.

How to book: Gloria will be no reservations for dinner or weekend brunch (they will have a queue system, so you can grab a drink and come back). Weekday lunches and breakfast will be bookable, online only. Bookings will be live from 22 February 2019.