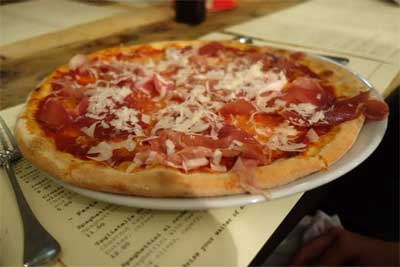 Hot Dinners was over in Marylebone last night to try out the three week pizza popup from Giorgio Locatelli. Pizza Locadeli is the first pop up to take over the Carousel space on Blandford Street and is being run by Locatelli and his wife Plaxy while Locanda Locatelli is being renovated.

Over the next five years this site will play host to all manner of foodie concepts, orchestrated by Shuttlecock Inc who raised the funds via Kickstarter.

It's divided across two floors. Upstairs is a bar, which on the night we visited was taken over by larger groups dining. On the ground floor there's some counter dining and the rest is communal tables. We squeezed into our seat - the seating here makes Polpo Soho look spacious by comparison and away we went.

First up was stuzzichini (£9) - a range of tiny bites to give us a flavour of what was to follow. So there was a single arancini, packed with ragout and peas, panelle, gorgeous panelle (chickpea fritters), olive ascolane (deep fried and stuffed olive) and an ethereal calzoncini which could have been stuffed with helium it was so light.

We both went for pizzas - although we looked with envy at a larger group beside us, which did the sensible thing and chose a selection of pizza and pasta to share. Both were well made with a range of well-sourced toppings - a Calabrese with n'duja and burrata and a Parma with Parma Ham and Parmesan (both £11). But, we have to say that personally we prefer the pizzas at Pizza Pilgrims.

The rum baba we wanted to try for dessert was off, so we kept it simple with two scoops of lovely milk gelato (£1.50 each).

For drinks, we kicked off with a really well made Bellini and just had a glass of Merlot del Veneto (£5) from a very truncated wine list. They could certainly have pushed the boat out a little and expanded this.

With lots of Locanda Locatelli regulars in on the night we were there, this was always going to be a hit and it's a good way to try out Giorgio's food if the Locanda Locatelli prices are too stratospheric for your budget.