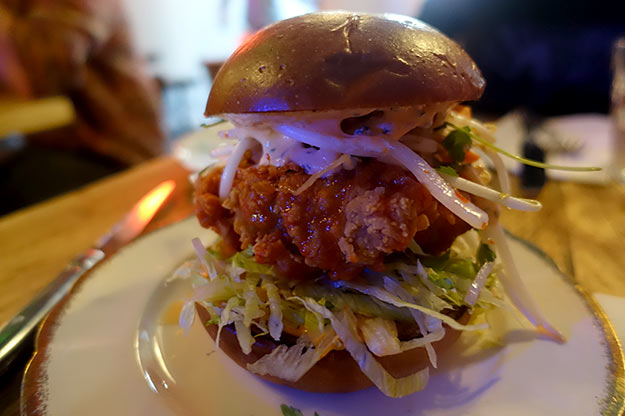 What can you tell us about Chick n Sours?

It's the first permanent restaurant for Carl Clarke, who's best known for various pop-ups and residencies across town, particularly several Disco Bistros. He's joined up with fellow Disco Bistro founder David Wolanski to create a fried chicken restaurant with a difference in Haggerston.

It's almost equidistant between Haggerston and Dalston Junction overground stations on the Kingsland Road, just down the road from Rotorino.

And who's it suitable for?

Pretty much anyone who's ever liked good fried chicken (more of that in a bit). It definitely gets busier and louder later on, so if that's not your thing (and you want to avoid queues on the weekend, when they don't take bookings) head there at lunch or early evening.

There are lots of options nearby, but our best suggestion would be a glass of wine at the almost next-door Rotorino.

To be frank, as much as you can muster. You'll notice there's a "House" and a "Guest" of everything - the former is their own specialty and the latter are specials. Apart from the fried chicken, which was among the best we've ever tasted, the menu is full of inventive sides and extras. These include lots of wonderful sounding flavoured mayos that we really wish they'd bottle and sell. As for our faves - they were:

Of course you'll want to leave some room for dessert. There's just one - the Weetabix soft serve with Weetabix crumb (£3.50). It was lovely, but would have been even better with a wee bit more sugar.

Obviously, you'll need to have as many of the sours as you possibly can, starting with the house Chick n Club - gin, sugar, lemon, raspberry, chilli, vinegar, vermouth & sour. All the sours are £6 and are all available as non-alcoholic options too. They really are very, very good. The only problem you're going to have is downing too many of them before attempting to stand up again. Outside of the sours, the wine list is highly recommended, chosen by Zeren Wilson and we loved that the fizz was served in coupes.

We were always going to be well disposed to a fried chicken restaurant, but this goes well beyond our expectations. Excellent fried chicken, inventive sides, great cocktails, AMAZING fries and lots of extra mayo combos we'll have to go back for. Highly recommended.

Hot Dinners were invited to Chick n Sours. Prices were correct at the time of writing.