[SIGPLUS_EXCEPTION_SOURCE] Image source is expected to be a full URL or a path relative to the image base folder specified in the back-end but /blog/2014/blanchette/gallery is neither a URL nor a relative path to an existing file or folder.
0
Shares 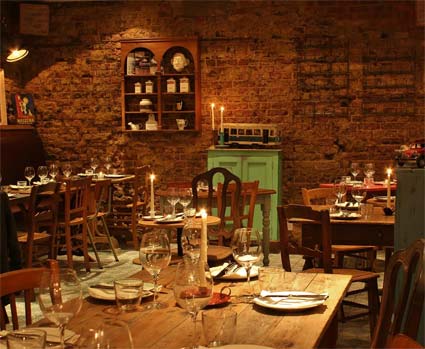 What do I need to know about Blanchette?

Blanchette is a French Bistro that specialises in small plates - essentially a French tapas joint. It comes from three brothers, Maxime, Yannis and Malik Alary and they've had the benefit of Ben Tish and Simon Mullins from the Salt Yard Group as consultants - who definitely know a thing or two about small plates. The talent in the kitchen is Tam Storrar, former senior sous chef at Bibendum.

Right in the middle of Soho - on D'Arblay street - about half-way between Oxford Circus and Tottenham Court Road.

Where should I meet friends for a drink nearby?

It's Soho - so the possibilities are huge. But assuming you don't want to walk far, Spanish restaurant Copita is only across the road if you fancy a quick pre-meal sherry - and upstairs at Social Eating House a few minutes around the corner is well worth it for the cocktails.

Where's the best place to sit?

We were impressed at how much space there was around the tables were at the back. There it feels nice and busy without feeling like you're sharing airspace with your neighbour - something that's quite rare in Soho. Although a lot of people are going to enjoy eating up at the counter in the front here too.

And what should we eat?

The menu is standard tapas in its layout (bites, cheeses, charcuterie, fish, meat and vegetable dishes) but with lots that you'd never see in a tapas bar. It changes regularly with plenty of seasonal produce making an appearance. We'd been watching their Twitter feed for about a week before we went and could see that while some dishes are regulars, there's plenty of new things coming on to make you return again and again.

We didn't have a dud dish all night (although if we were being spectacularly picky the huge dollop of creme fraiche on the olive oil cake didn't do it any favours), but those that particularly stood out were:

You can see everything else we had - and take a look at the menu - in the gallery below.

It's also worth pointing that we would have happily worked our way through the dessert menu if we had the time - and also that we'll be ordering their bearnaise fries whenever we return.

The wine list has about 14 reds and whites, starting at £18.50 a bottle and reaching £100 a bottle if you're feeling particularly flush. A short cocktail list of classics is available between £8 and £9, and plenty of juice if you're off the hard stuff.

We've been meaning to visit Blanchette for some time, ever since it opened in the rush before Christmas but it was worth the wait. With all the other positive reports we're seeing you're going to have to plan ahead to get a table here.

Prices were correct at time of writing. Hot Dinners ate as guests of Blanchette.