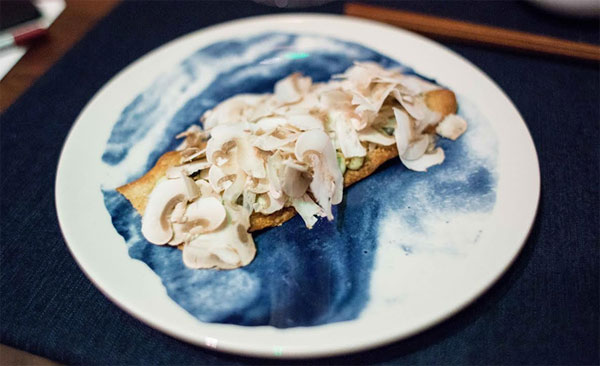 What can you tell us about Flat Three?

After more than a year in development, Flat Three, a joint venture between Juliana Kim Moustakas and chef Pavel Kanja opened in Holland Park at the start of this month.

The menu describes itself as 'taking inspiration from flavours of Japanese, Korean and Scandinavian cultures’, which are also evident in the drinks focus and design aesthetic of the restaurant. Head chef Pavel Kanja honed his craft at Wabi alongside Scott Hallsworth, gaining an understanding of the finer side of Japanese cuisine. He has also been influenced by his recent travels to Scandinavia, as well as by the native Korean cuisine of business partner Juliana.

Flat Three can be found deep in the heart of London’s embassy district - located in a basement in Holland Park, an area peppered by ambassadorial palaces of bling. The area is a little off the beaten track, but its also worth noting that neither Hedone nor The Ledbury are within striking distance of anything you’d call a ‘dining scene’.

Given the aforementioned challenges of location, you’d probably be best to sip your first glass somewhere central before hopping in a cab to Holland Park. Other than that, it really is just the local pub a few doors down.

As you descend the carpeted stairs into the spacious subterranean dining room, you’ll notice Japanese and Scandinavian design influences are prevalent. Despite the minimalist aesthetic, the space has an intimate feel thanks to the low ceilings and clever lighting.

There are well spaced out tables for two and four and a couple of vaulted booths, which allow a little more privacy. Almost every table in the dining room allows for a full view of the open kitchen and chefs. Filled with sparkling chef’s toys, the centrepiece is a walnut clad pass which allows Pavel a final moment to pore over each dish before it's whisked away.

And what stood out on the night?

Diners at Flat Three are presented with the choice of a 5 or 9 course tasting menu. However there is also a à la carte menu featuring many of the same dishes for those who are pressed for time.

We opted to try the 5 course vegetarian menu and Chef’s choice tasting menus. Highlights for us were:

The drinks pairings have clearly been given much thought here and the team have succeeded in selecting a range of lighter wines, sakes and cocktails as well as a wide selection of house-pressed juices, tonics, infusions and ferments.

We left the choice of drinks to the front of house who brought us a combination of the above. These included a young dry German Riesling from Mosel producer Fritz Haag, a grapefruit juice made with their very own ‘F3’ tonic, an earthy Pinot (also German), a hibiscus & grape tea finishing with a zippy Plum umeshu.

The wine list has a noticeable emphasis on Rieslings and Pinot Noirs, most of them from small producers. However, ordering from the list can be pricey with entry-level options starting at £8 a glass and £38 a bottle.

Flat Three are clearly attempting to occupy a unique niche. Whilst still in the realms of fine dining, the atmosphere remains relatively casual, and the staff are efficient and already very well versed. The food here is not over processed, instead focusing on unique combinations, preparations and juxtapositions to enhance and showcase what is clearly top quality produce.

Timing is very important when running an operation like this, and it was impressive to see the kitchen already so well rehearsed. Dishes came at a steady and sensible pace, with service never frenetic or hurried.

You won’t get away for much less than £100 a head, so whilst this is ‘special occasion’ territory for most of us, this is certainly a place we'd be happy to while away more evenings at.

Hot Dinners were invited to Flat Three. Prices were correct at the time of writing.