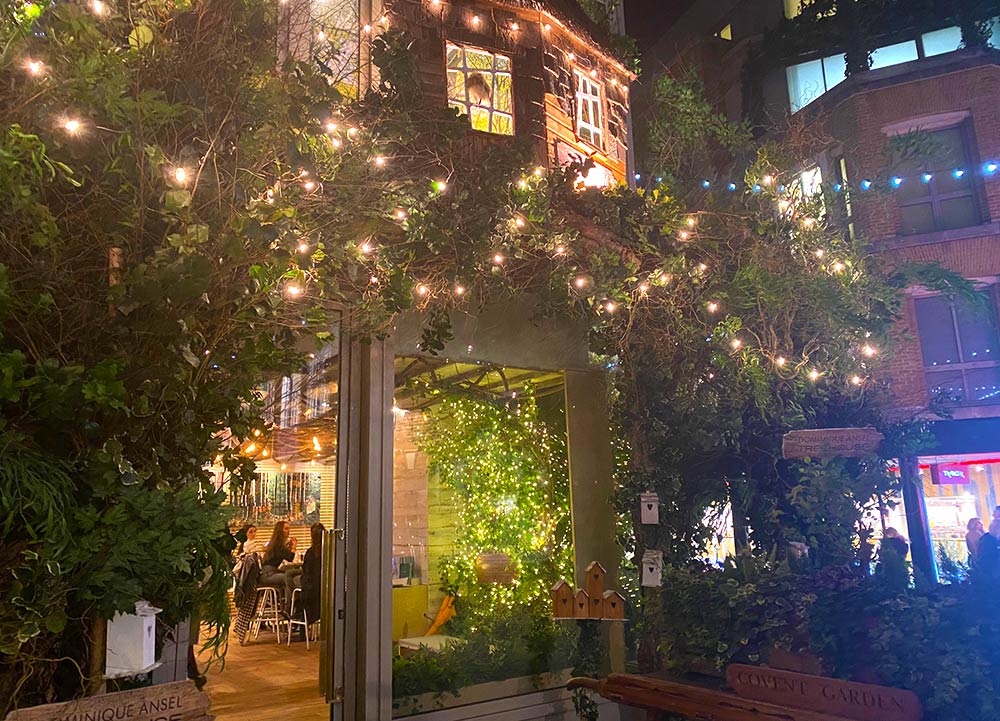 The outside of Treehouse is a little on the floral side (apt, considering it's on Floral Street).

What can you tell us about Dominique Ansel Treehouse?

Ansel himself is a French patisserie chef who became A Big Deal in New York, primarily due to his signature cronut - one of the first instances of people queuing around the block for pastries. Ever since then, he's expanded worldwide, which included opening a hugely popular bakery in Pimlico. This is his second London outpost, but it's something of a departure. For one, there isn't a cronut to be found and secondly, it's being billed more as a pastry-focused restaurant (with a small bakery attached)

So what kind of food can we expect?

They're celebrating the work of the pastry chef - so that means everything from pasta to pies, pithiviers, cakes and more.

It's about a two minute walk from Covent Garden station, at the Garrick Street end of Floral Street (just round the back of Petersham Nurseries).

And why exactly is it called Treehouse?

Because that's exactly what it looks like. The outside is adorned with greenery, and the inside is all simple wooden panelling and sunken tables - with a rope-covered "tree trunk" at the centre of the two floors (we're going to assume that handily covers a support structure). The ground floor has the appearance of being under the canopy, while upstairs is in the tree itself.

The whole thing does skirt close to theme restaurant territory, but the design just about manages to avoid falling into that trap. It does actually have a real treehouse feel to it - making you feel quite removed from the bustle of Covent Garden.

What's the setup of the menu?

It's simply split between small plates, large plates and sharing desserts. Portions are generous and there are a fair amount of carbs in the menu, inevitably. Between two people, we'd recommend 2-3 small plates and 1-2 large - but definitely pace yourselves. With so much pastry work we'd assume a fair amount is done in advance - so dishes arrived quickly and you can easily order dishes gradually, as you want them.

Also worth noting - if you over-order, they will happily package up anything that you leave (we did this with the bread below). 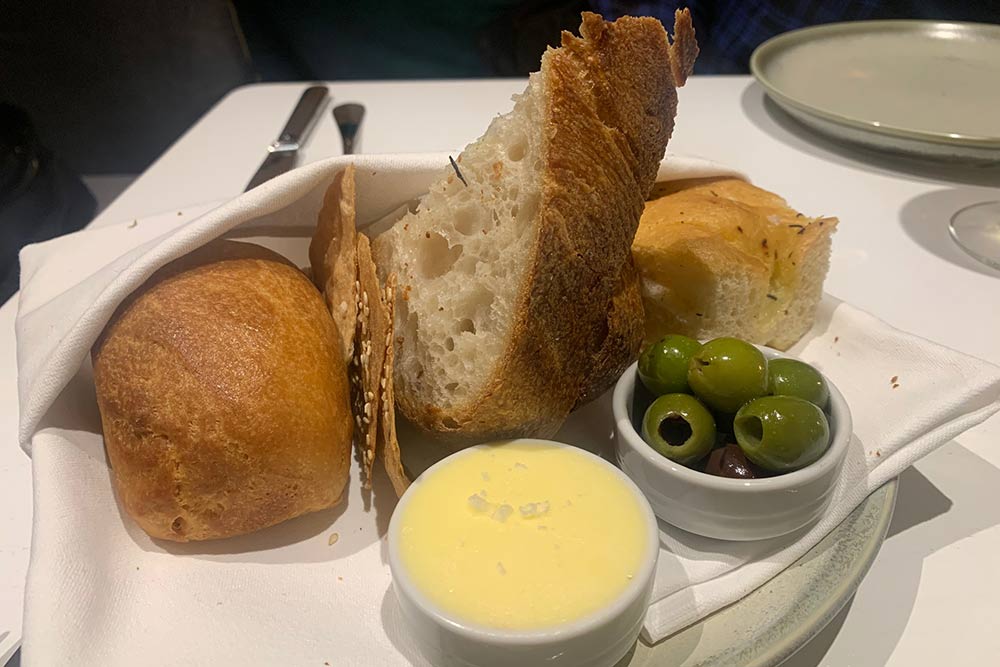 The Bread Basket - Sourdough (made with Ansel's original starter), garlic focaccia, lavash, brioche, ciabatta and olives. For £3, it's a pretty generous bread basket (and the bread, olives are excellent) but if you're planning on trying as much of the menu as possible, this may be too much of a carb overload. 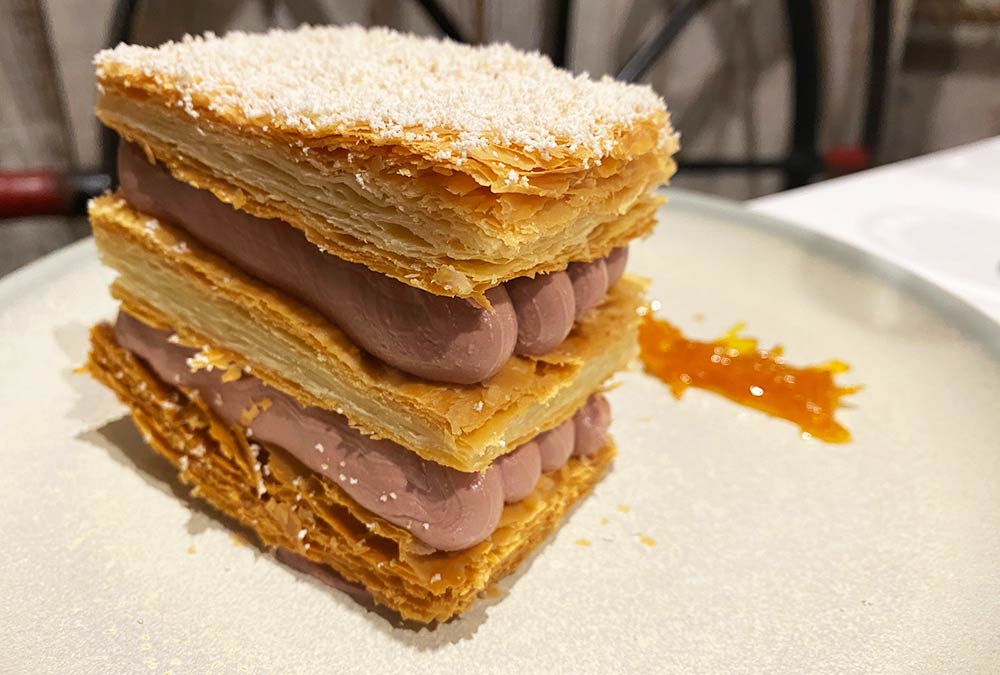 Chicken liver mousse millefeuille with candied mandarin and brown butter dust (£10.50) - definitely one to order - a light touch on the pastry that matches the mousse well. Marvel how this looks when it's put in front of you, because when you get stuck in, things get messy pretty quickly. 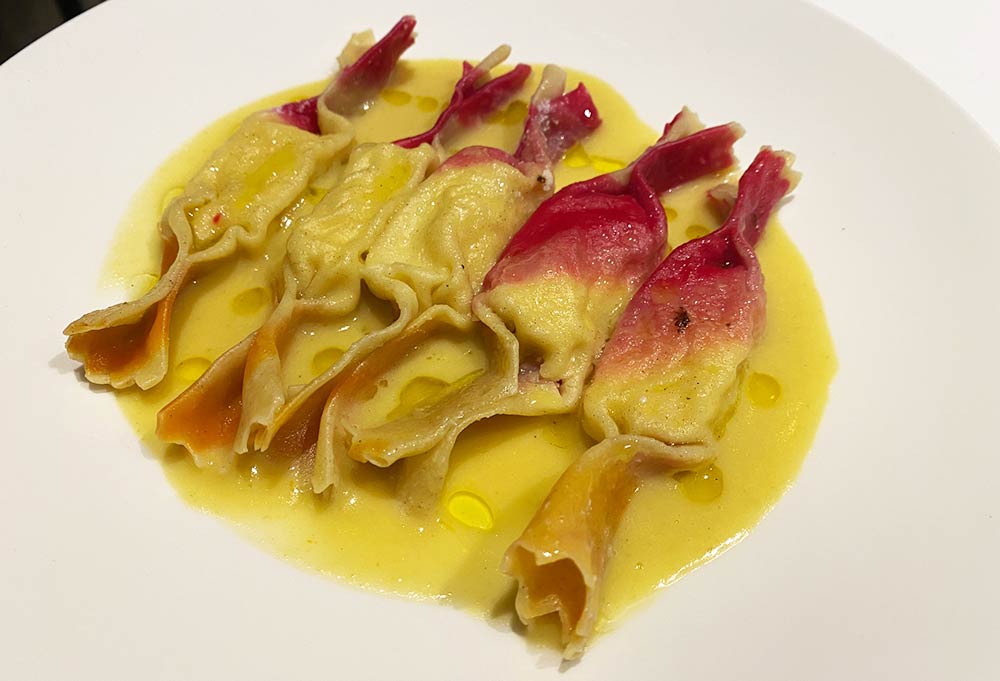 Caramelle pasta with rcotta, cashews, golden tomato and marjoram cream (£11) - looks great, but this wasn't a massive hit for us. We think nearby Bancone is just a better bet for pasta. 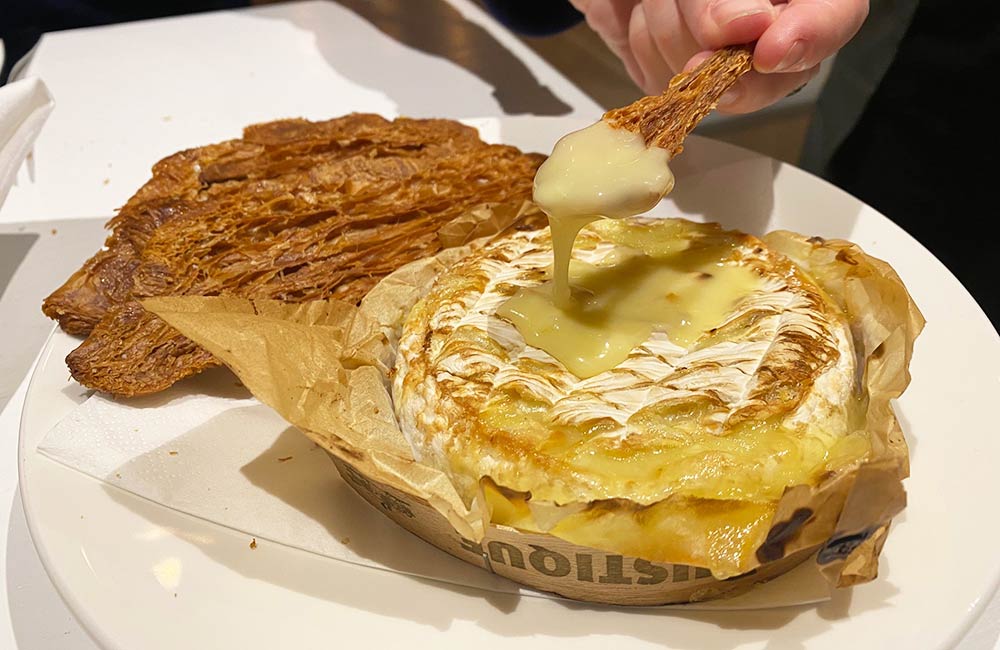 Camembert fondue with croissant crisps (£10.50) - this is best for groups of more than two. The croissant crisps are ingenous and who doesn't like camembert - but be warned it's quite filling. May well be perfect if you're just popping in for a snack though. 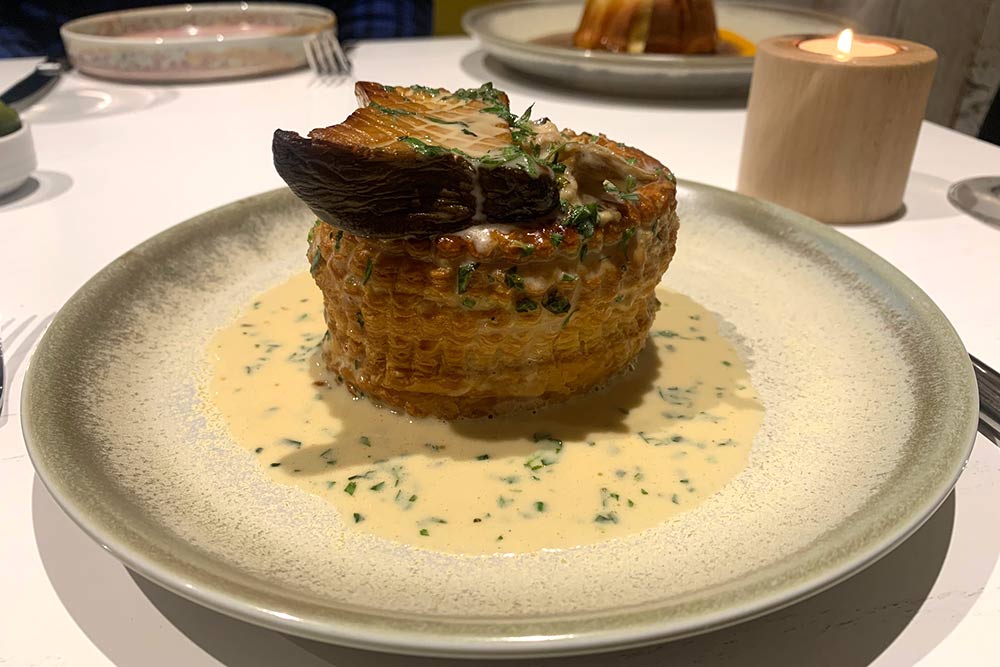 Confit chicken and wild mushroom vol au vent with tarragon veloute (£15.50) - you can't go wrong with a vol au vent and this was an excellent example, plus the pour-over veloute on this was gorgeous. 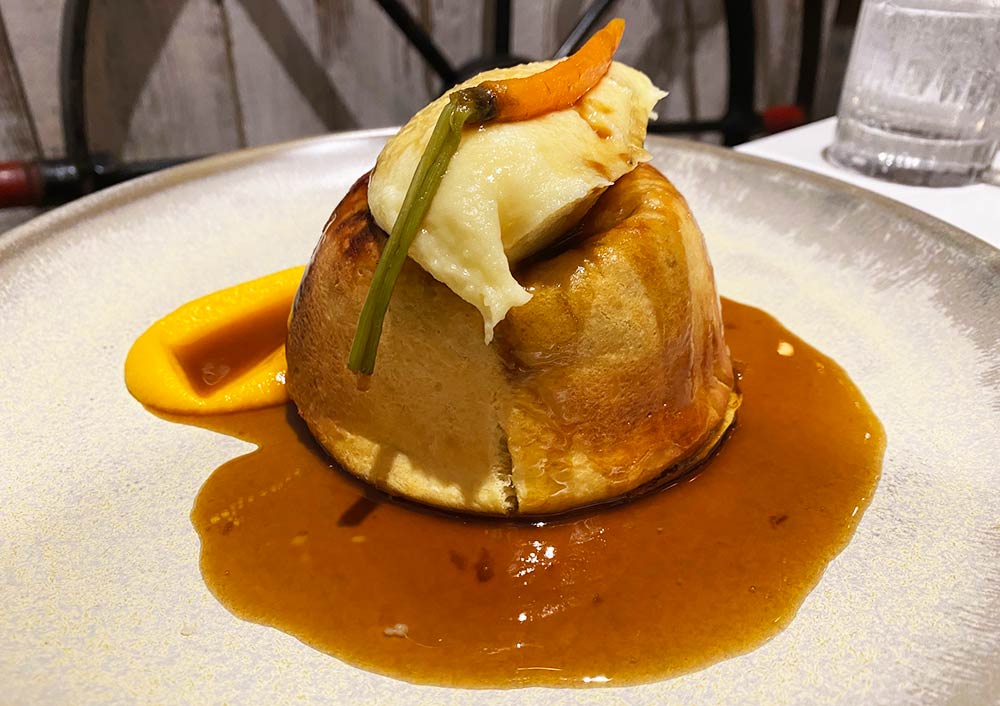 Given his reputation, desserts were always likely to be the main event, and that's really the case here - so make sure you leave room for them.

Most of the desserts have an element of theatre about them and feel quite unique to Ansel. Apart from the below (one of the signatures), the profiteroles shaped like children's building blocks are something you're very likely to come across on Instagram. They'd run out of these on our visit - so if you're particularly keen on a particular dessert, you might want to consider asking them to reserve you one at the beginning of the meal.

All the desserts are for sharing and will be more than enough for two. Here's what we went for. 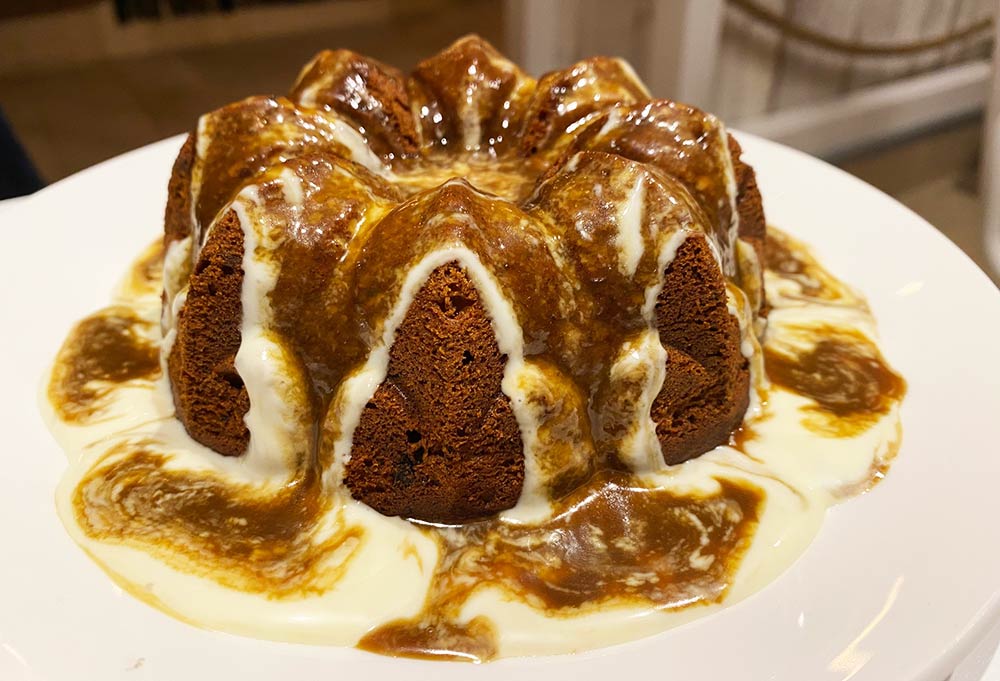 Sticky toffee pudding with duo pour-over toffee and custard sauce (£12) - this is ALL over Instagram due to the Insta-friendly theatrics of all that sauce being poured over. We were a little surprised at cold sauce over a warm pudding - but this really was a top-notch sticky toffee, and surprisingly light too.

There are beers and plenty of hot drinks (of course) alongside a short wine list, led by five wines by tap. We tried both of the whites - a 2018 Famille Chaudiere Viognier from Ventoux (£6 175ml glass, £18 500ml carafe) and the 2017 Cosimo Masani Trebbiano Chardonnay (£6.50/£19.50) the latter being excellent. It's well priced for Covent Garden and it does make Treehouse an excellent place to stop for a carafe and a shared dessert if you need a break from the Covent Garden hordes.

And what if I fancy taking something home?

There's a small retail bakery on the ground floor, where you can pick up cakes, pastry and bread. No cronut as mentioned, though. So if you really fancy one of those, you'll have to head to Pimlico.

Dominique Ansel has taken his time in London, building up a fanbase in Pimlico before coming to Covent Garden. Treehouse's debut in London means you're getting the chance to try the very latest from the chef (we can absolutely see similar formats appearing worldwide). This pastry restaurant has its hits and misses (the pasta needs work) but the desserts really show why he's renowned worldwide. It'll be another hit for him - and will be all over Instagram for a while to come.

Hot Dinners ate as guests of Dominique Ansel Treehouse. Prices are correct at the time of writing.

Where is it? 24 Floral Street, Covent Garden, London WC2E 9DP