Test Driving Delamina - a taste of the Eastern Med in Marylebone 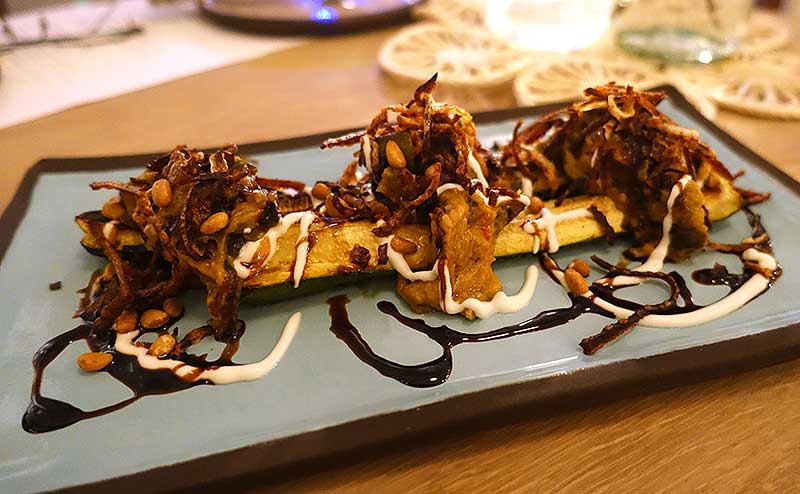 What can you tell us about Delamina?

Firstly it's from the same people behind Strut and Cluck in Shoreditch. So husband and wife team Limor and Amir Chen are in charge, with Limor being the one behind the menu and Amir Chen primarily front of house. We were fascinated to learn that he was the man behind the mini cafe chain Apostrophe - which he's now sold on while Limor's past as an artist can be seen in some of the installations in the restaurant (and you'll spot plenty of family pictures on the walls too).

While Strut and Cluck started with a menu primarily based around turkey (the food, not the country), it evolved to a broader Eastern Med menu and that's the point where Delamina starts. So expect a modern menu, with inspirations from Eastern Med and the Middle East in a laid back setting.

The food lends itself to sharing, so larger groups will work well here - and it has a buzzy atmosphere, so don't pop-along for a quiet meal (but who wants that anyway?). Essentially, if you're a fan of the cuisine and want a fun night out in Marylebone, put this on your list. 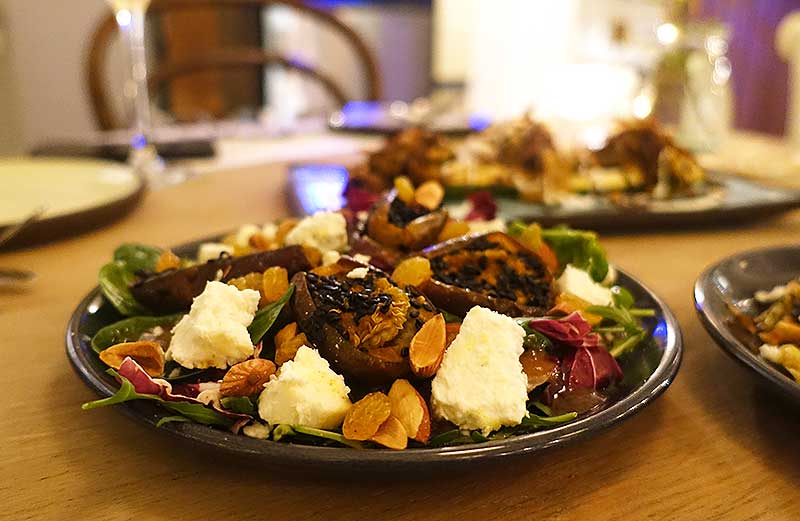 It's on Marylebone Lane, just off Wigmore Street. Your nearest tubes are either Bond Street or Oxford Circus.

If you're coming from Oxford Circus, then an easy recommendation is The Wigmore. It's about five minutes walk away but definitely one of the best places for a quick drink in the area and has become something of a regular haunt for us when we're up this way (it gets busy, though). Otherwise, a good option is across the street with 28:50 if you fancy a quick glass of wine. 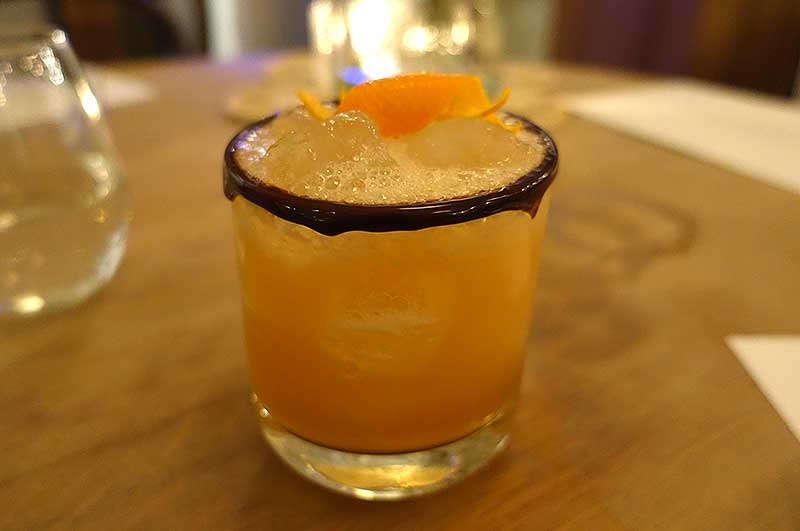 The "Jaffa I've mist you" cocktail. Note the messy (in a good way) rim.

Once there - where should we sit?

It's across two floors - ground and basement and each offer something different. As the restaurant is on a corner, we'd imagine it's nice and bright during the day on the ground floor (we visited in the evening). Personally, we'd say aim for a ground floor table, but the open kitchen in the basement helps to elevate that space too.

Should we have a pre-meal cocktail?

It's usually hard to say no to this - but in this case, we'd particularly recommend the excellent "Jaffa I've mist you" (£9.50). Wordplay aside, it's essentially the cocktail version of a Jaffa Cake. That's Havana 7, orange bitters, elderflower, orange blossom mist and with the rim of the glass covered in candied orange syrup. Messy but WELL worth it. 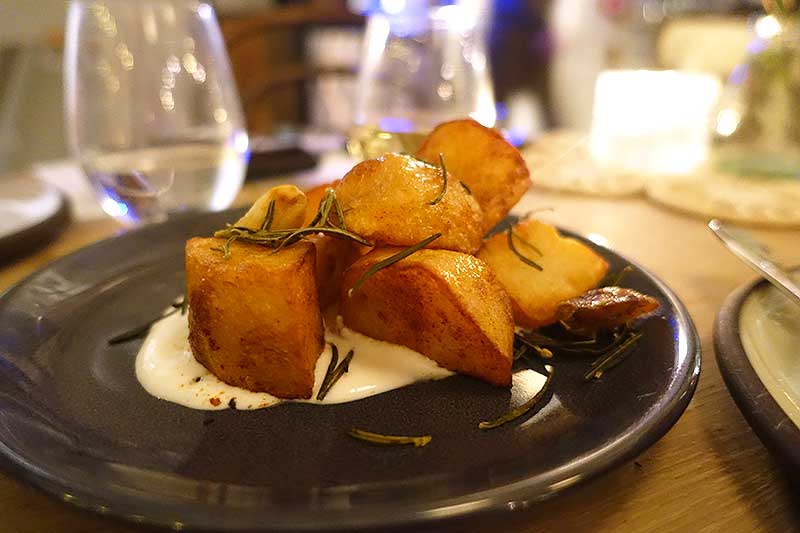 And anything to have while we peruse the menu?

In this case, we didn't have them but the spicy okra tempura sound like they fit the bill on the snacking front. We went instead for the Pita Balagan. That's the grilled flatbread topped with "today's larder". So take a quick look at the specials board, if it fits the bill, that's your snacking food.

And how about the menu - how's it laid out?

A large chunk of it is devoted to vegetables - much of which are small plates - and it's worth working your way through these. There's a strong focus on vegetarian dishes here, so if that's your preference you'll find plenty to choose from in this section.

Particular favourites on our visit were the "Grilled courgette two ways" (£7.25, with crispy onions, pine kernels and labneh drizzle) as well as the baby aubergines smothered in sesame. 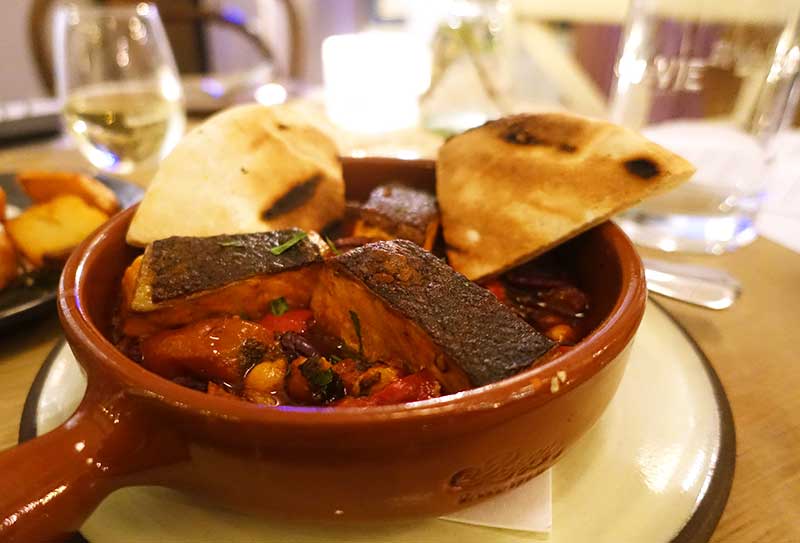 If you're moving on from the small plates - there are meat and fish sections for mains. From our selections, we think these can easily be shared too. We went for one of each - "Moshe's herbed and spiced angus beef and venison koftas on a bed of hummus and tahini, grilled onions , harissa oil drizzle and pomegranate seeds" (£14.75). This is based on a family recipe which they're particularly proud of, as well they should be. The "Salmon Charyme - baked with peppers and tomatoes, chickpeas and kalamata olives" was also a winner (£15.50).

Oh - and head back to the vegetables section for the crispy rosemary potatoes with garlic infused yoghurt - you'll want these as a side.

Should we save room for dessert?

Absolutely - and if you only have one dessert, it should be the kadayif nest of vanilla cheesecake cream with caramelised pecans (£6.50). Kadayif has Turkish origins, and can best be described as crunchy sweet noodles. Put together with the cheesecake cream and you have a much lighter alternative to cheesecake and the best dish of the night. Expect to see this on many an Instagram feed. 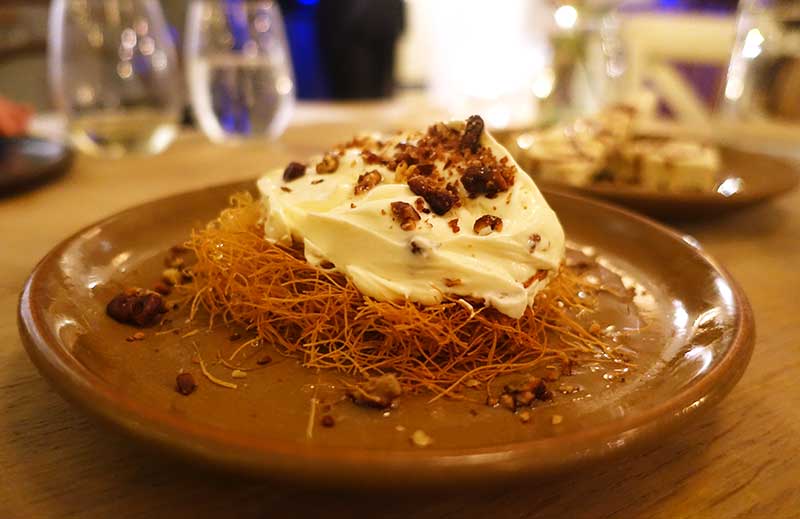 The wine list has a few examples from Lebanon, Palestine and Israel (with one from the Upper Gallilee the most expensive on the list at £55). So if you fancy going out of your comfort zone and trying drinks from the same region as the food - head for these (as well as the Beirut beer). Otherwise, there are a selection of European wines starting at £21.50 a bottle.

This is a very fine addition to the area. We visited only a few days after opening and the place was already buzzing and we were told that they've already had a few locals in more than once and plenty of rebookings. And indeed, our dining companion on this occasion booked again for a future visit before leaving - which is always a good sign of a restaurant that's immediately won you over. A fun restaurant with an accomplished Isreali/Middle Eastern menu - well worth a look.

Hot Dinners were invited to Delamina. Prices are correct at the time of writing.