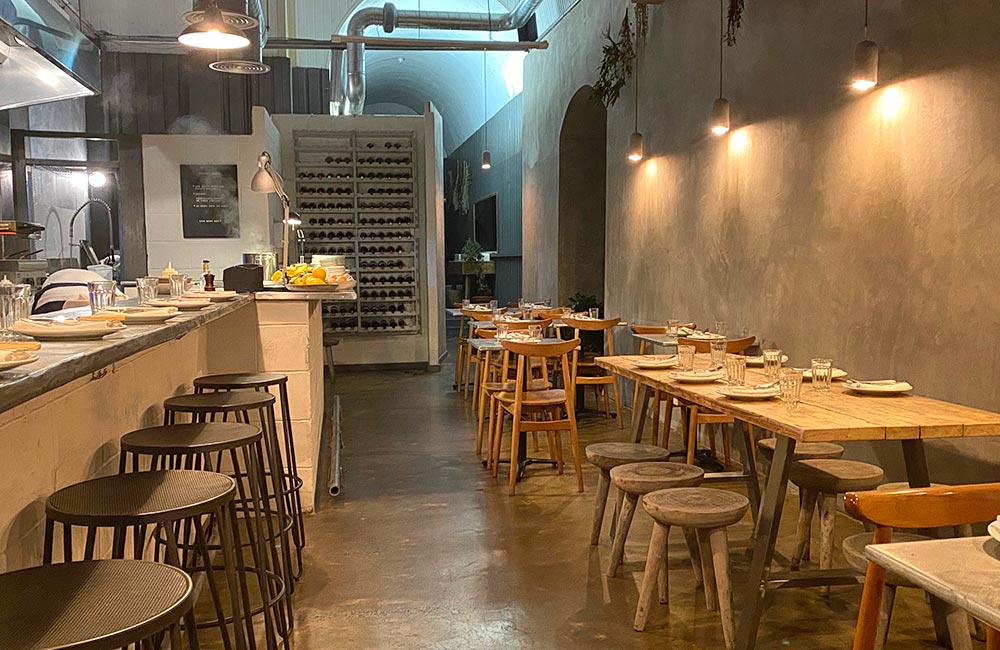 Perch up at the counter if you like being in the thick of it - and there's also that big group table on the right if there's a gang of you.

What do we need to know about Dandy?

This is really the third incarnation for the restaurant. It began as a popup in London Fields, moved to Stoke Newington and has now, minus a founding member, arrived in South London. The new partnership sees chef Dan Wilson teaming up with Matt Wells, who also owns two Clapham restaurants, The Dairy and Knife.

You'll find it on Maltby Street, just before the entrance to the Ropewalk part of the market (it's where Monmouth Coffee used to be). It's pretty equidistant between London Bridge and Bermondsey tube stations.

Depends what day of the week really - as a few of the places here aren't open outside market times - Dandy itself is open from Wednesday through to Sunday. Nearby Doodle Bar goes big on local craft beers and there's always the chance of a good G&T at Little Bird Gin further down Maltby Street.

There are a couple of options - in addition to the usual tables of two and four, there's plenty of counter dining spots or a communal table if you're dining solo or with a crowd.

They say "honest tasty dishes" - we say, it's an incredibly strong menu. All the versions we've seen so far would make it hard to choose what to have. But of course we did have to knuckle down and make some choices, so here's what we went for: 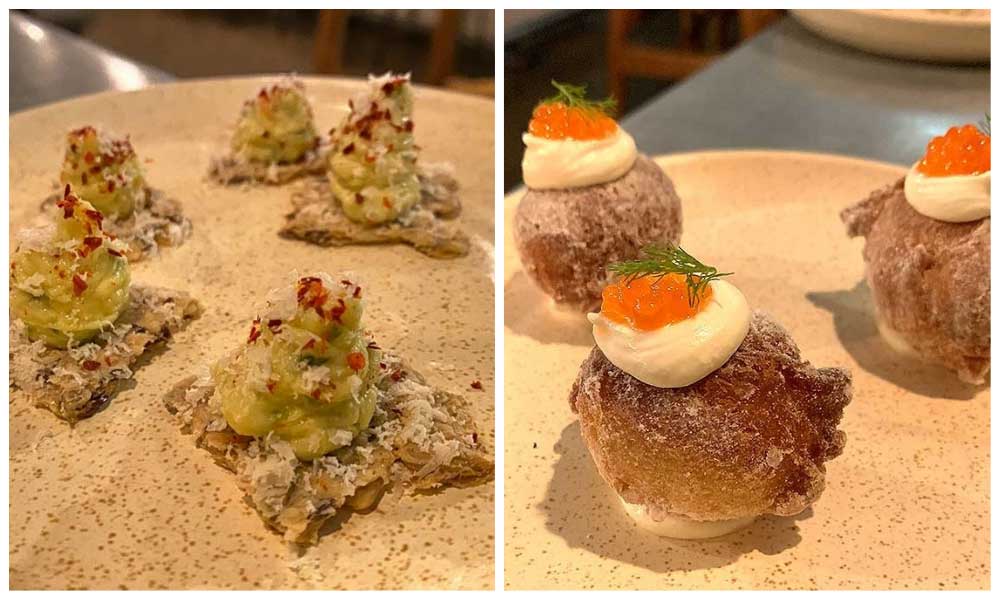 Cheese crackers (£4) and sweet and sour donuts with creme fraiche and trout roe (£8) - order these while you work out what else you're going to want. Try not to come to blows over who has the last donut. 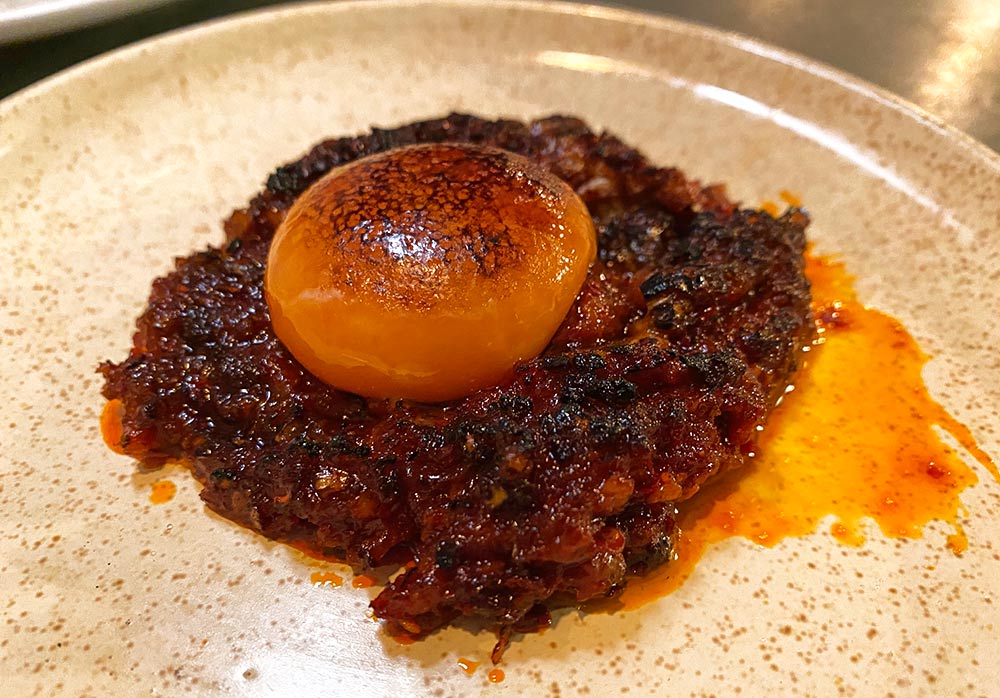 Nduja with bruleed egg yolk (£8) - a dish of fire, sweetness and slickness and we loved cracking into that yolk. 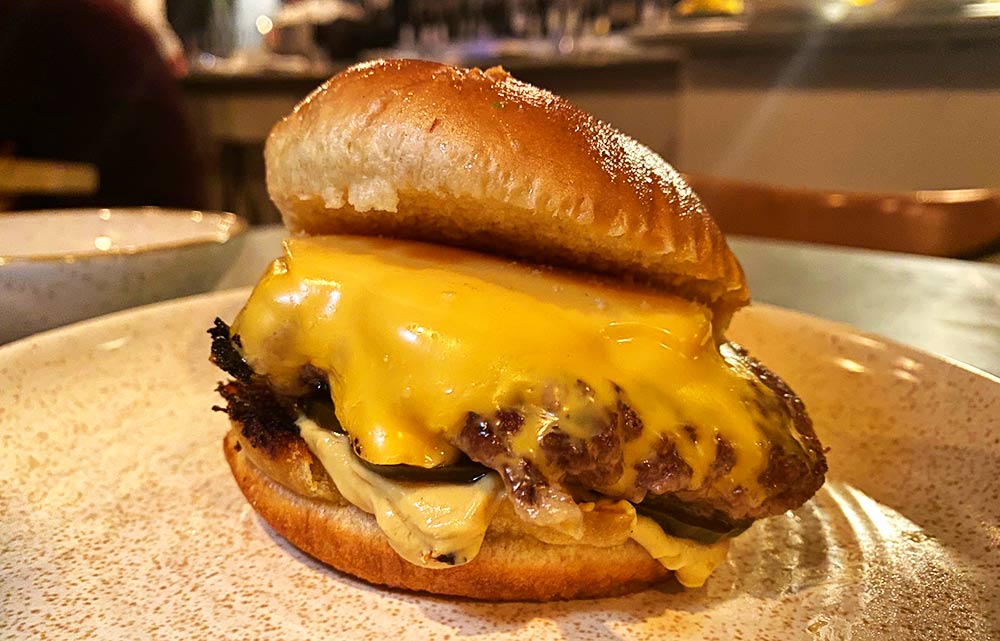 Cheeseburger with dripping (£11) - beautifully medium rare burger, served with a bowl of meaty dripping for dipping. Messy and delicious. 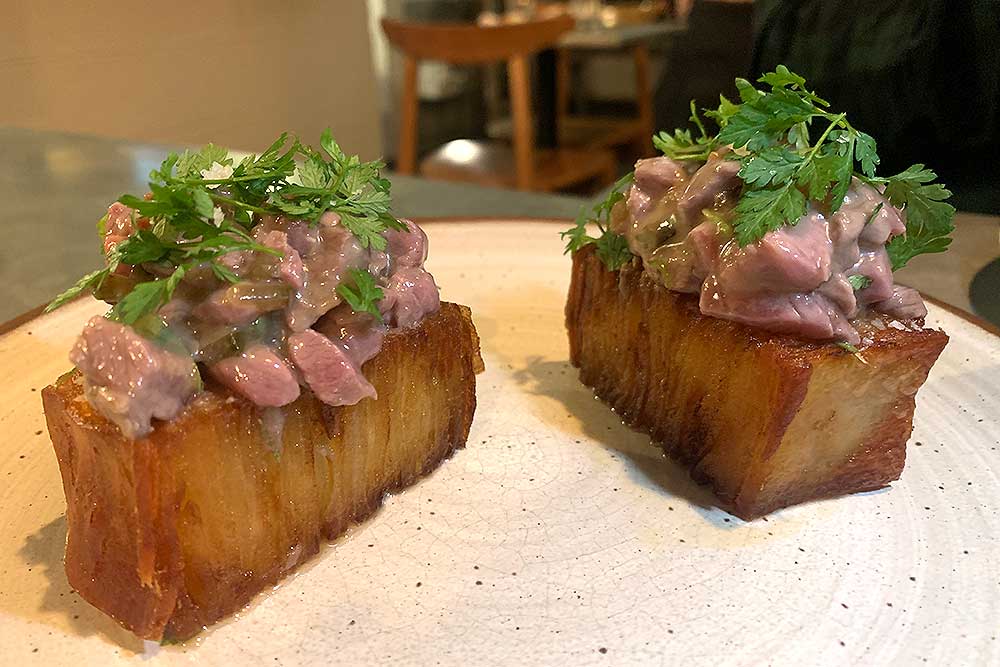 Bone marrow steak tartare (£13) - how do you make your tartare even more of-the-moment? Serve it on confit potato of course. 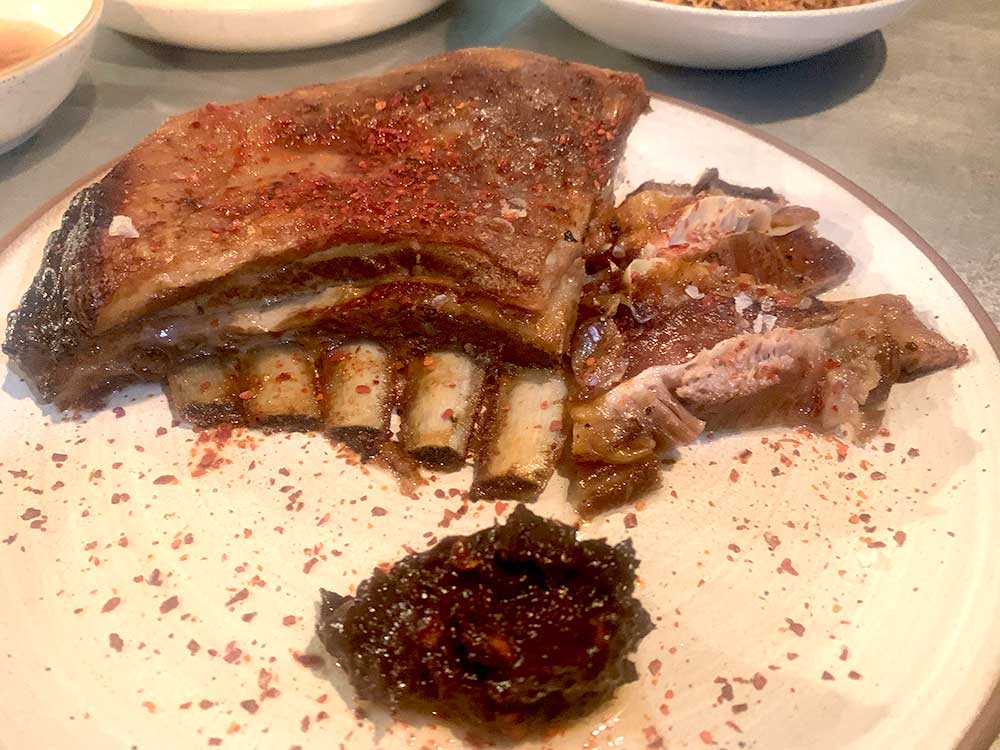 Lamb ribs with lamb juice glaze and a mix of miso, chilli, coconut jam for a thrilling extra kick. (half portion - £20).

There's plenty of interesting options, from whipped chesnut on toast as a snack to cauliflower with cauliflower cream and chilli paste or the sheep ricotto and yolk raviolo with chanterelles and sage. 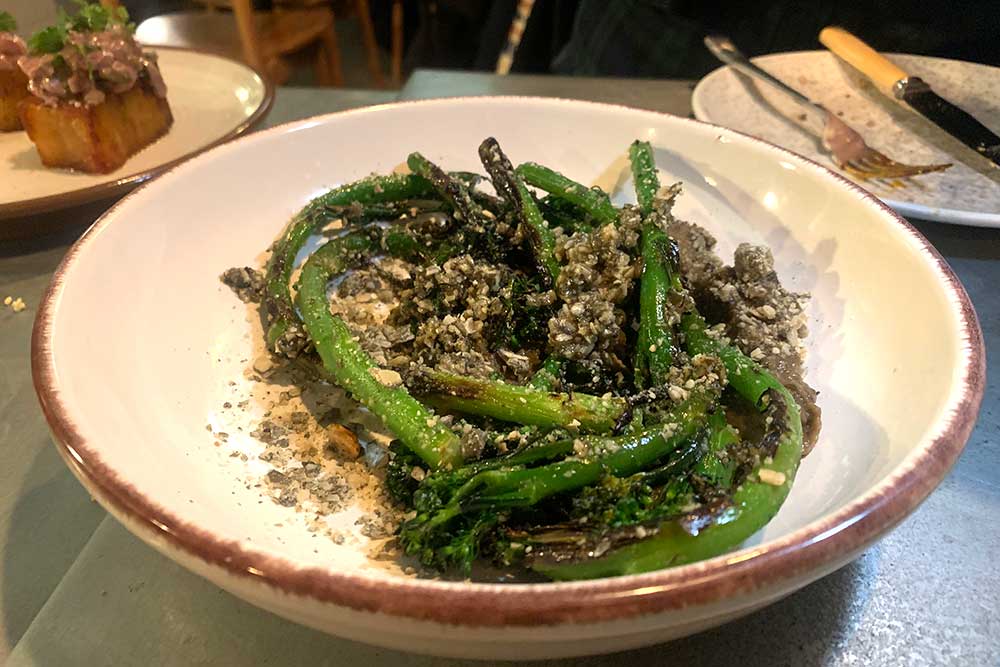 Burnt tenderstem with aubergine (£12) - we'd have enjoyed this anyway, but the addition of candied pumpkin seeds elevated this veggie dish into a must-try.

You'll absolutely kick yourself if you miss out on what's become their signature - a baked cheescake of such lightness it collapsed when we breathed on it. Sadly the fried custard wasn't on offer when we went or we'd have made room for that too. 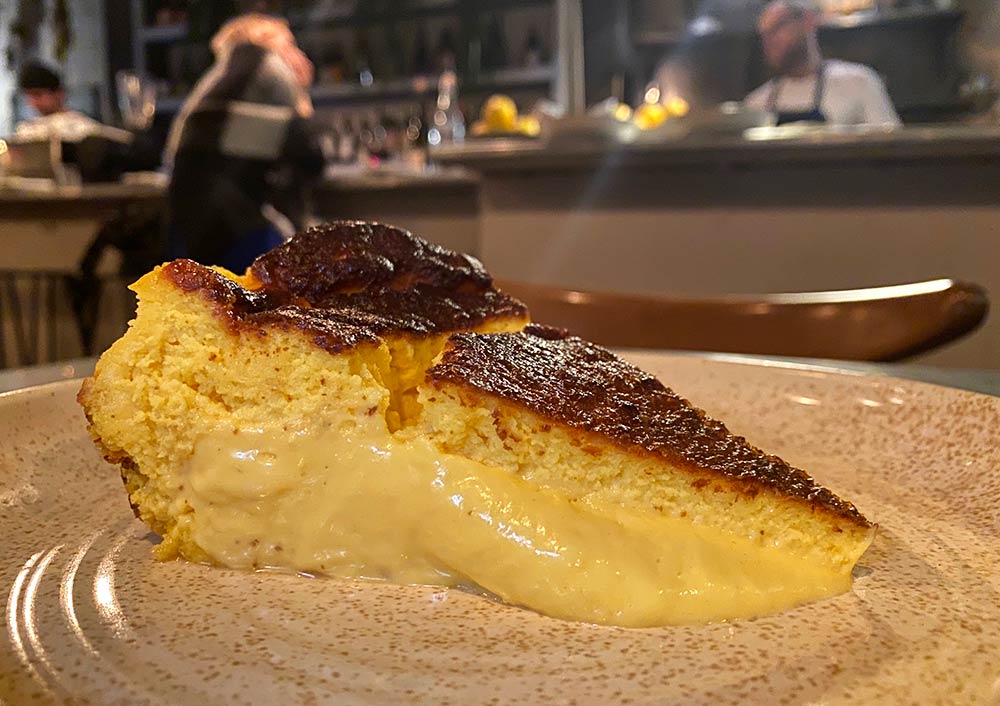 Yes, it looks like it'd be the death of you after a good meal - but honestly, this was SO light.

It's a list that roams all over Europe - we kicked off with a glass of Spanish sparkling wine from Penedes (£8) and had a very light red Pinot Noir from Vignoble Guillaume (£30 - bottle). There's plenty in the £30-£40 range and you can push the boat out too with an Emidio Pepe Montelpulciano at £171.50. There's also a shortish, but good beer list and some interesting no booze choices including their 'This is a good drink' - made from Muller Thurgau pressed grapes with Chardonnay vinegar and soda water (£5).

We were much enamoured with Dandy during its time on Newington Green, so we're frankly delighted to see them in such nice new digs. It's a very friendly place to be - with a nice buzz even midweek in February. We've been watching the menu changing even through the first few weeks and every time we look, there's loads more we'd like to try.

Hot Dinners dined as guests of Dandy. Prices correct at time of publication.