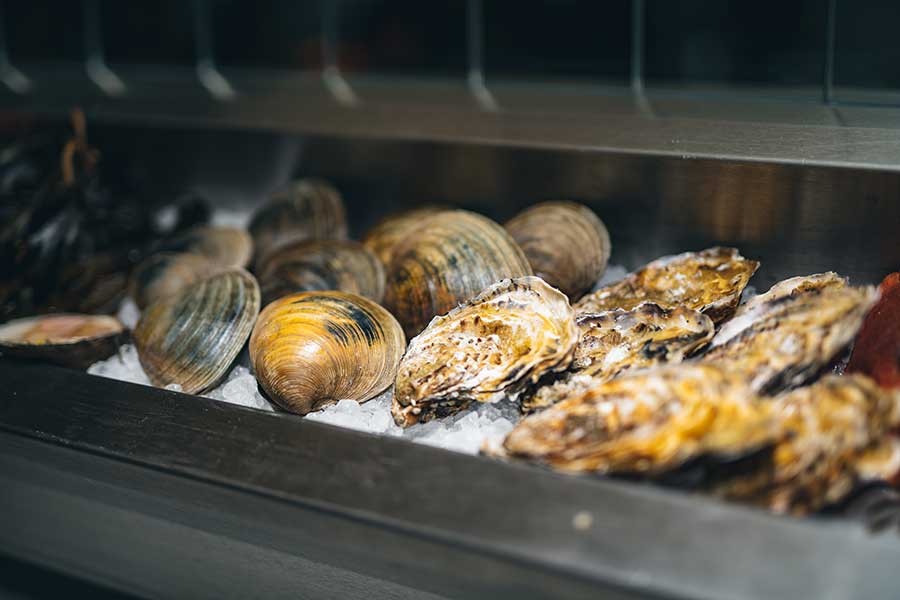 If you're after a bit of counter dining, sit up at the oyster bar.

So what do we need to know about Daffodil Mulligan?

The key thing to know is that this is chef and restaurateur Richard Corrigan's first new London restaurant in over a decade (he also has Bentley's and Corrigan's Mayfair in his stable). Here he's teamed up with two other hospitality folk - John Nugent, who owns King's Place by King's Cross and Tony Gibney from famous pub Gibney's of Malahide, just outside Dublin. Together, this Irish trio has taken over the space previously occupied by another Irish restaurant, Nuala.

You'll find it about a minute's walk from Old Street tube station. Head for exit 3 and it's just down City Road beside Passo.

Where's a good place to meet friends for a drink first?

This is easy to answer. Start here. Daffodil's has its own downstairs pub (that's the part that is mainly run by Gibney's) complete with Club Orange and King's crisps - traditional soft drink and snacking Irish choices.

In addition to serving a cracking pint of Guinness, bartender Cormac Gibney (yes, he's Tony's son) has come up a super cocktail list too. Our Blood Orange Jalapeno Margarita (£11) was just the thing to pep us up before dinner. If you aren't having dinner, this is also a good place to catch Irish football and rugby games on the big screen and they're promising a roster of live music and spoken word performances too. 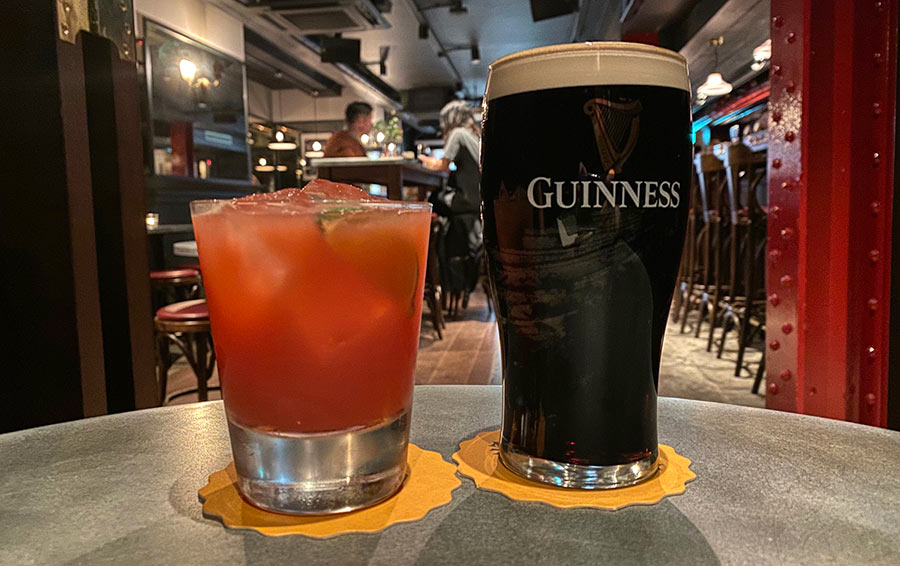 It's up to you really. If you're here for maybe a glass of wine and some small plates, the section at the front with high tables will suit you better - we can see ourselves making use of that. On our visit, we liked our table in the main dining room close to the action in the kitchen. You can also get up really close if you grab one of four seats up at the oyster bar.

So this is an Irish restaurant - what's on the menu? Bacon and cabbage?

Of course not. This is an Irish restaurant in terms of the key team behind it (Corrigan's new Executive Head Chef is Colin Kelly - previously from the popular Picture restaurants). The playlist is definitely Irish, although Corrigan, who put it together, is more likely to include the Cranberries or Lankum than something trad. And much of the produce that inspires the kitchen comes from Ireland, ranging from the polytunnel salad leaves from Corrigan's own Virgina Lodge estate in County Cavan to the beef from Tipperary and Hannan Meats in Northern Ireland.

But what Corrigan and the Head Chef here, Simon Merrick, do with all that is very far from being a traditional Irish menu. Instead, we think it showcases what both London and contemporary Irish restaurants do best, mixing local produce with an ever-changing modern menu that takes its influences from global cuisine. 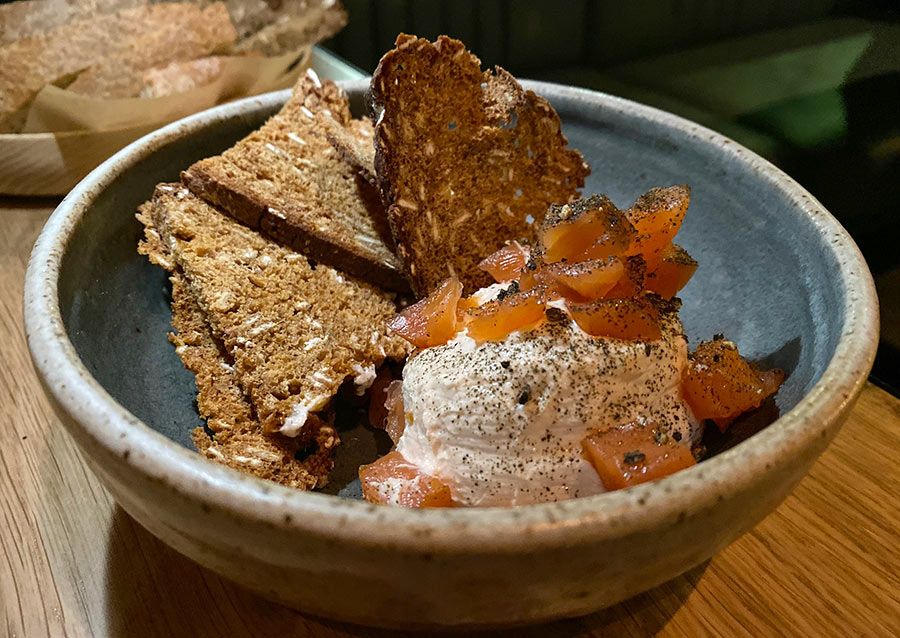 Whipped smoked cods roe with seaweed, topped with smoked salmon and served with soda bread crackers - insanely good value for £2. Actually we'd go so far as to say this is probably the best budget dish you can enjoy right now in London restaurants. 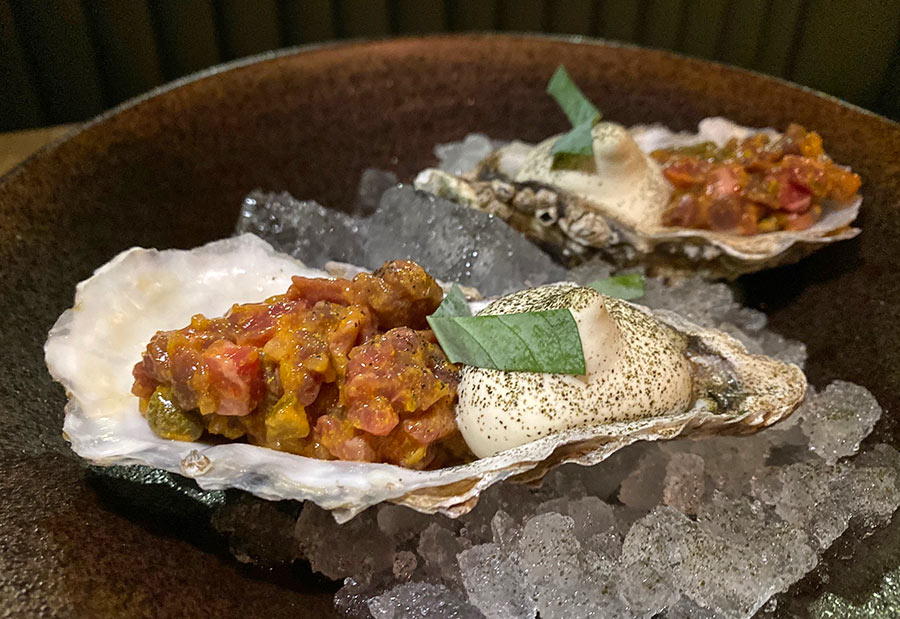 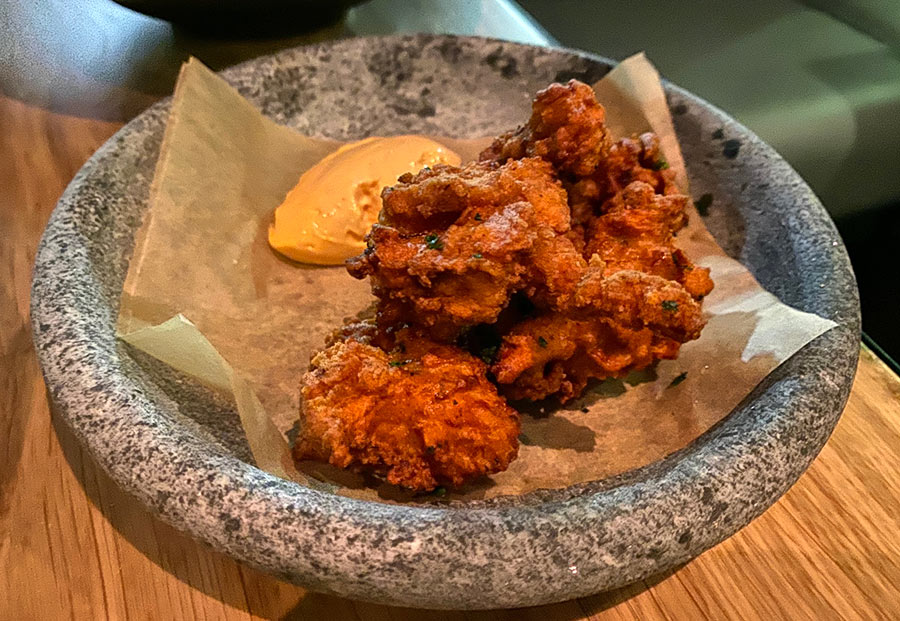 Salt chilli chicken with chorizo mayo (£7) - nothing finer than perfectly fried chicken bites with a deeply flavoured mayo for dunking. 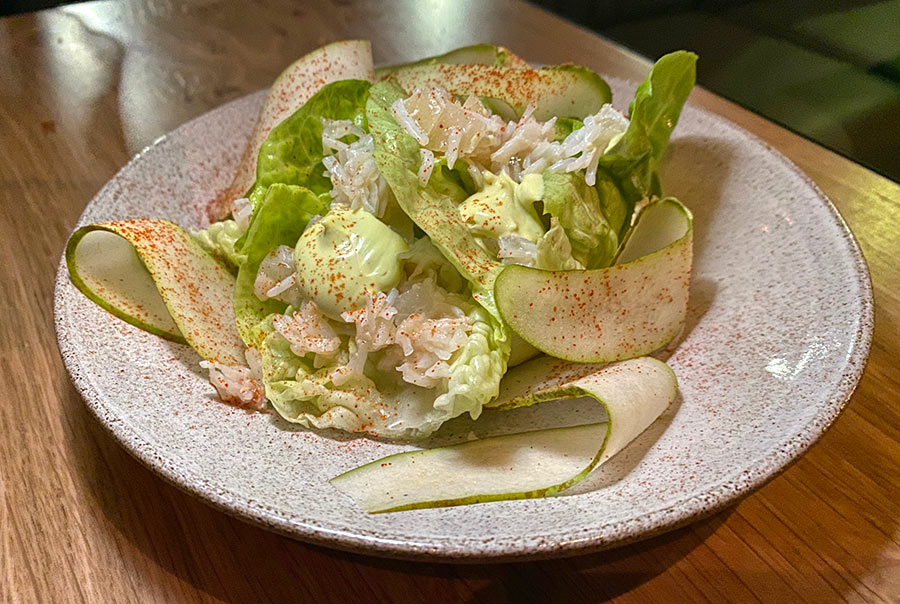 Crab with lovage and pickled pear (£10.75) topped with slivers of fresh pear - a dish that allows the sparkling fresh crab to shine through.

For mains, we were torn. Dishes we really fancied off the main menu included Lebanese-style lamb chops with raita and the wood oven-roasted lobster with kimchi also sounded great. But we couldn't resist this from the specials board. 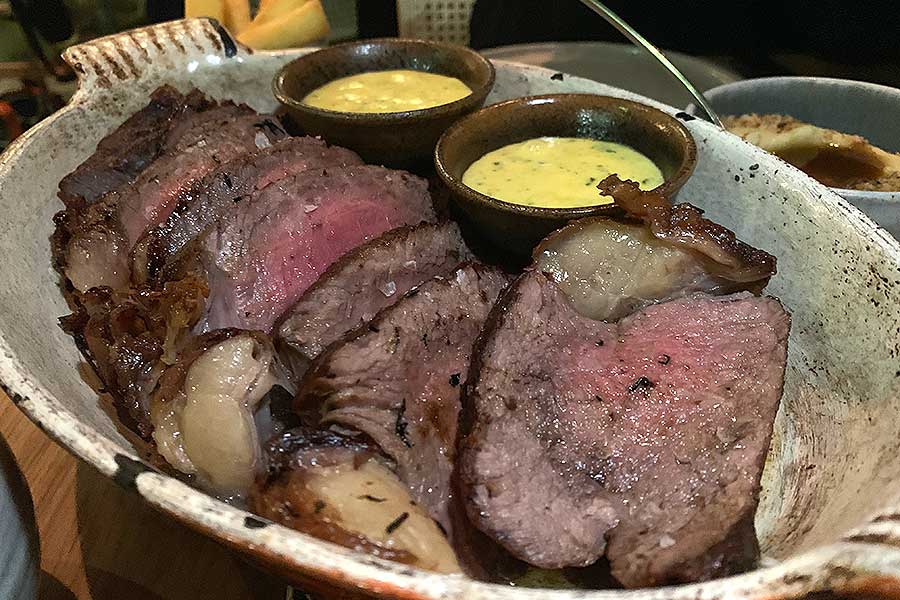 Tipperary sirloin for two (£75). There was enough for three in this huge dish so we took a portion home in a doggy bag for sandwiches the next day. Perfectly cooked, wonderfully flavoured beef served up with a range of excellent sides of which the roasted Virgina Park Lodge carrots were standouts, as was this... 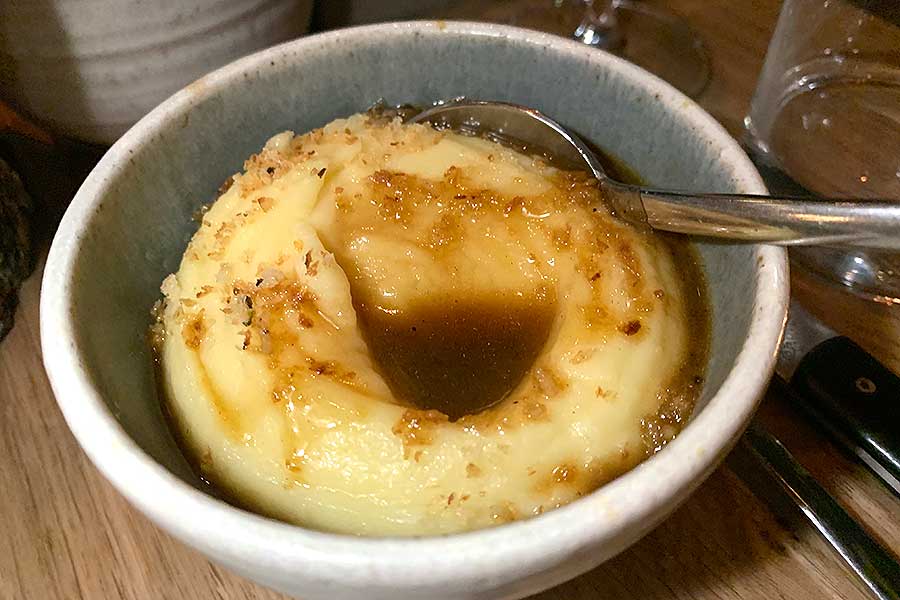 ... mash with bone marrow crumb (£4). A new iteration of a favourite we loved when Pitt Cue first did a version of this. Here the addition of the crumb adds a new layer of texture which meant we just couldn't stop eating it.

Anything else worth highlighting?

The lobster comes very highly recommended - it's roasted for merely a couple of minutes in the oven before being brought to the table. It's getting the highest praises...

Now you'd think after all this we couldn't manage dessert, but it turned out that after a break we were more than able to tackle these two (both £6). 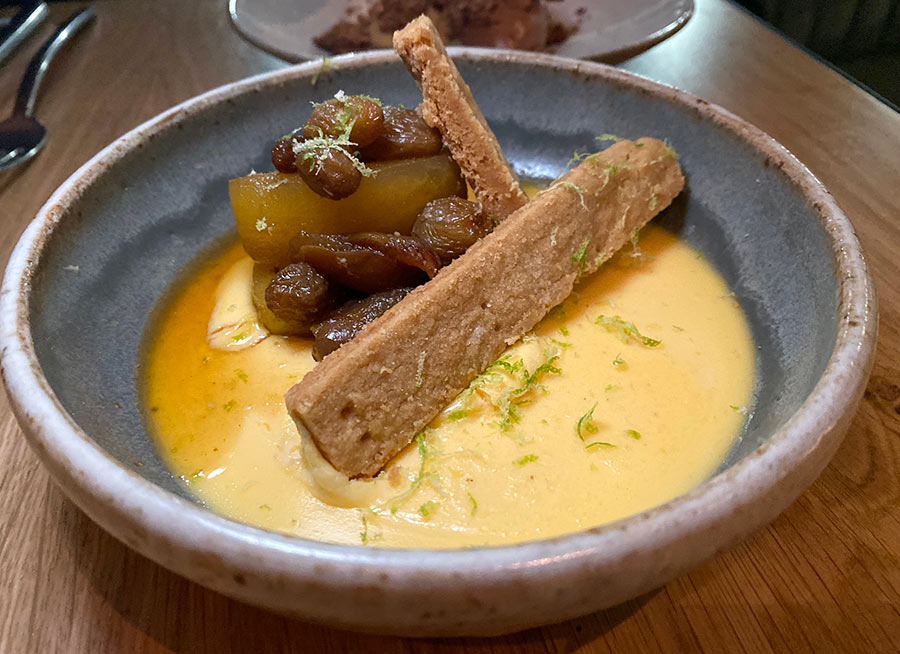 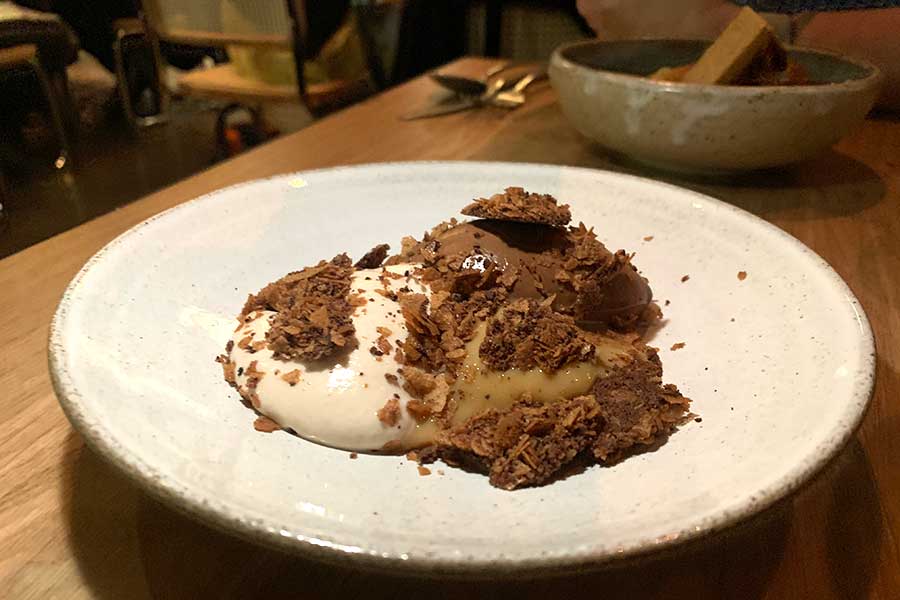 Glasses start at a crazily good value £5.40 for a Verdejo or £6.50 for a French Merlot. It's a shortish list at the moment (with plans to beef that up) with a decent pink/orange section and some big hitters like the Orchard Block Pinot Noir from Oregan's Sokol Blosser for £124. We played it safeish with a lovely fruity Sangiovese (£36). For dessert, don't forget to try the Killahora Ice wine from Cork. And, of course, they'll serve some of the very best Guinness in the local area.

Richard Corrigan has done it again. In Daffodil Mulligan, you're enveloped by warm Irish hospitality from the moment you arrive (Corrigan's son Richie is the GM here - keeping it in the family). The menu by Corrigan and Kelly can change as much as twice daily, keeping the restaurant on its toes and that energy really translates through to the dining room. Eating here was fun and delightful and we left immediately working out how we could fit in a return visit before Christmas.

The folks at Silicon Roundabout should be very happy with this new addition to their neighbourhood.

Hot Dinners ate as guests of Daffodil Mulligan. Prices are correct at the time of writing.