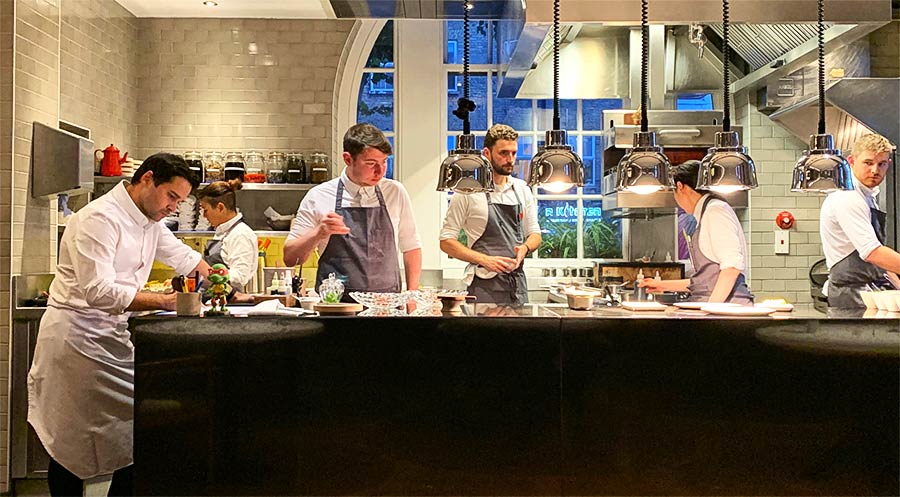 The team at work

What can you tell us about Da Terra?

This is the third restaurant to take charge at Bethnal Green's Town Hall Hotel. Originally, things kicked off there back in 2010 with Nuno Mendes' groundbreaking Viajante, which was followed up by Lee Wescott's much-rated Typing Room in 2014 and now it's the turn of Da Terra. It's co-owned by chef Paulo Airaudo, who also owns the Michelin-starred Amelia in San Sebastian, along with former Fera and Aulis chef Rafael Cagali who is in charge of the kitchen in London as Head Chef. The two chefs met at The Fat Duck, so they've had top-level experience behind them.

The Town Hall Hotel is on Cambridge Heath Road and just a couple of minutes from that station or a five-minute walk from Bethnal Green tube. The restaurant has its own entrance from that road. 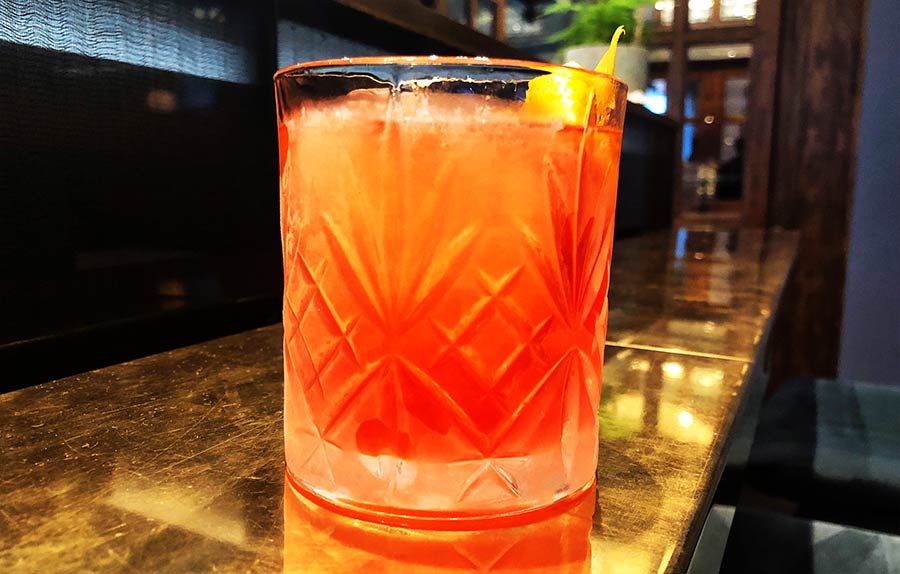 Start with an (excellent) negroni in the bar (just across the hall from the main restaurant).

Has the restaurant changed much since the last iteration?

The open kitchen - easily one of the most striking things about the restaurant - remains in the same place, because why would you change one of its best features? As with Typing Room before it, Da Terra has put its own stamp on their space, which seems much brighter than before (particularly in the bar).

We also became fast fans of the music soundtrack, which didn't seem to stray too far beyond the early nineties while we were there. It gives the room much more of a party vibe, which does work very well with the fine dining aesthetics of the food. We've been to some great fine-dining restaurants which were a bit "whispery". This is the complete opposite of that, and makes the dinner seem much more of a fun occasion.

And there's a separate bar, as before?

There is, and the restaurant is in charge of this too. That means there's a bar menu that seems every bit as worth visiting for as the restaurant itself. There you'll be able to order snacks like pecorino churros, Arancini al Taleggio, chicken wing skewers and Caesar Salad Bites. The bread and cultured butter that's available at the restaurant is here too as well as a plate of pork belly tortellini that also sounds pretty great. We had the snack below and if this is any indication, a visit to the bar seems like a great way to try out the food at Da Terra, 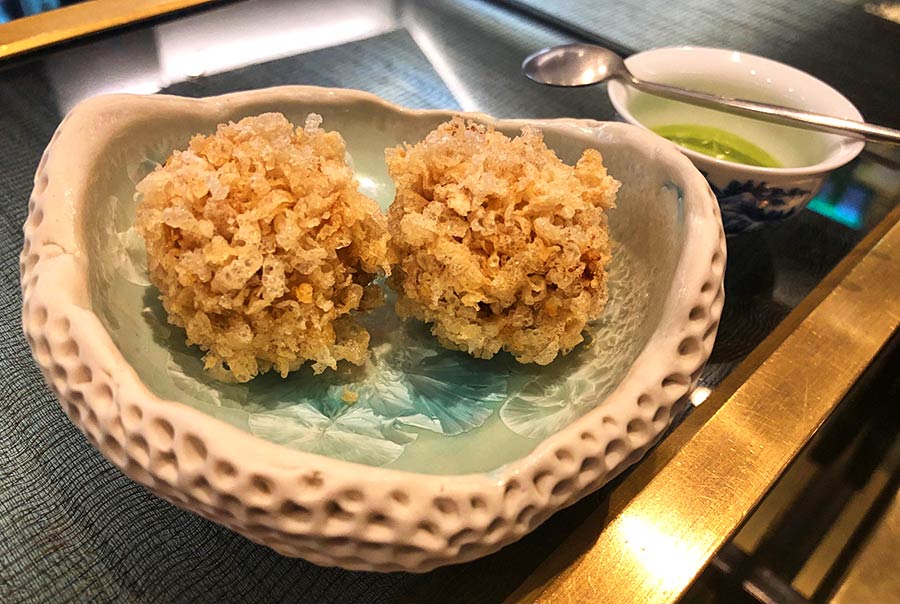 As for drinks, there's a short wine and beer list as well as a fairly understated list of cocktail classics (all £12). The Cosmo and the Negroni that we had were expertly prepared (with extremely chilled glasses) so we think you really should be making time to start the meal out with a cocktail.

Into the restaurant - where should we sit?

The restaurant is divided into two - so if you want to make sure you get a good view of the action in the kitchen, ask for the front part of the room. If you're not bothered about that, then the back is absolutely fine - and there's a big round table for larger groups there.

So how about the food itself - it's a tasting menu affair?

It is indeed - with a short or long variant (£73 or £90). It's all delivered with a little difference though - you're not given the menu upfront. Instead, each dish is described as it's brought out (and you do get a menu right at the end). This is something that could go awry in other hands, but the team here deliver each dish with just the right level of info - you get succinct intros to the dishes, but nothing is over-explained. That's a particularly fine line to manage, but they pull it off here.

Obviously, the blind tasting menu means you had better be upfront with any dislikes (for instance, one of us has an aversion to beetroot) - but once that's covered, you'll be in for a great evening.

The menu will change seasonally - here's what we had on the night. 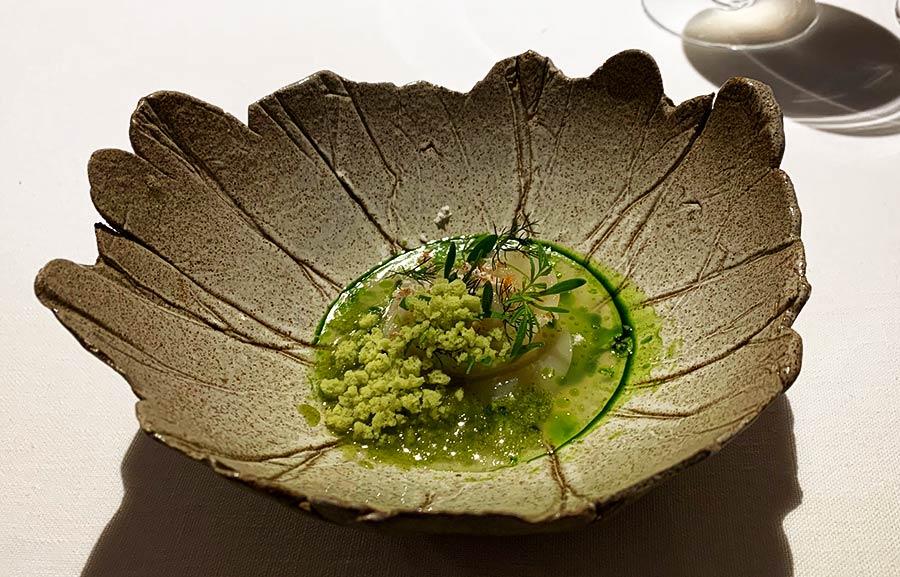 Isle of Mull scallop, fennel, Granny Smith - topped with frozen Marigold leaves. This also comes with the next dish... 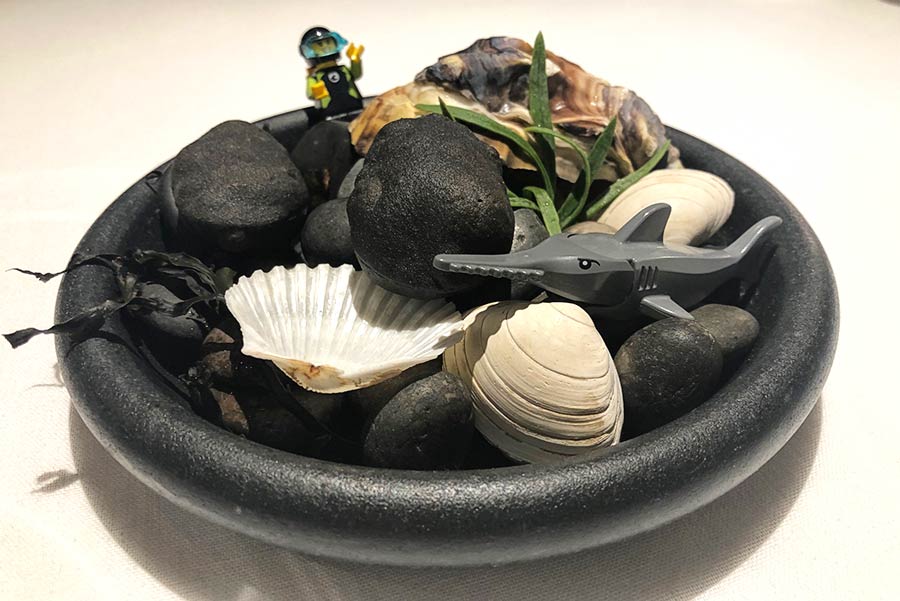 The roe of the scallop is made into a mousse and served in these pebbles. Watch out for the shark... 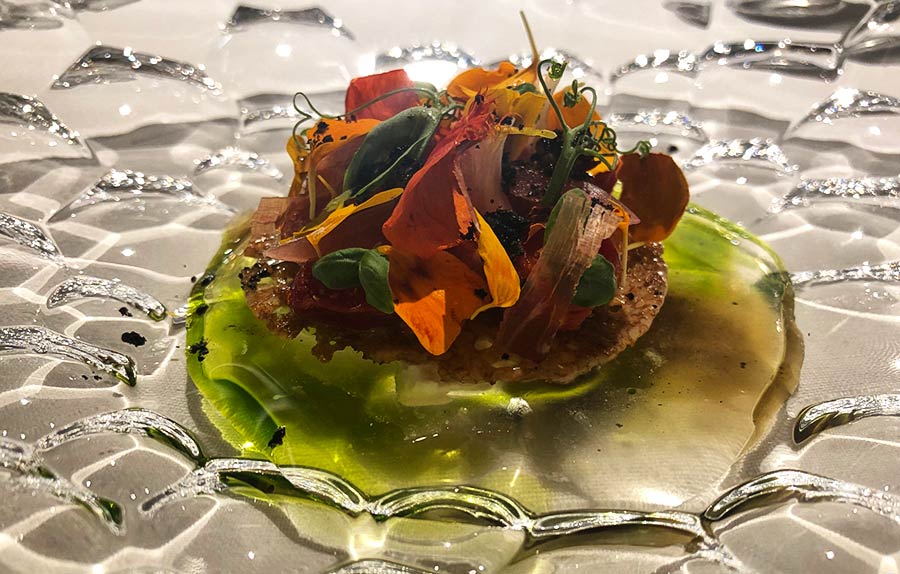 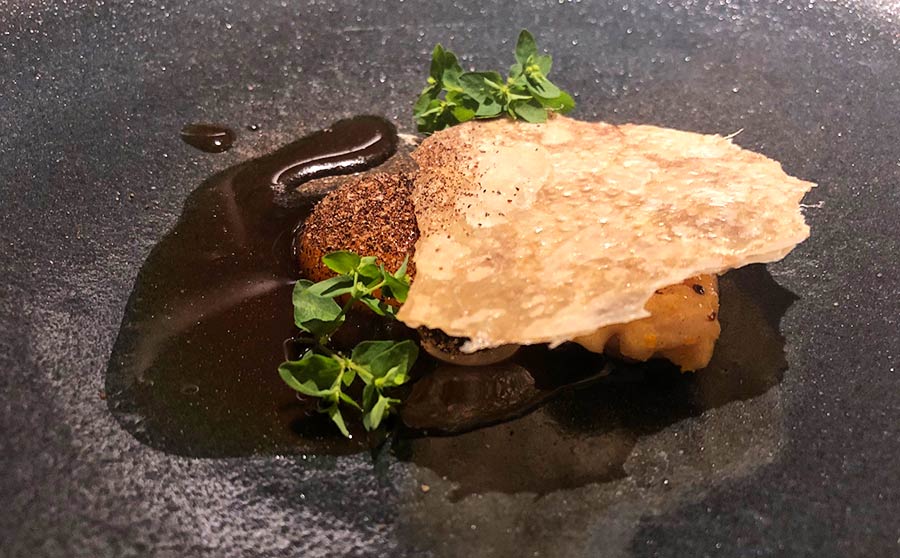 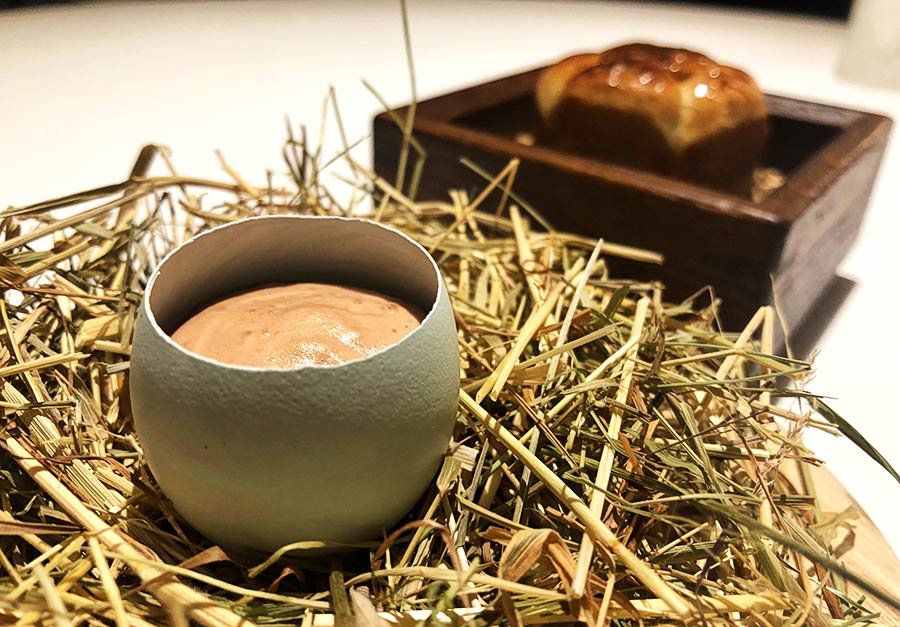 Part of the chicken course - chicken liver parfait with brioche. 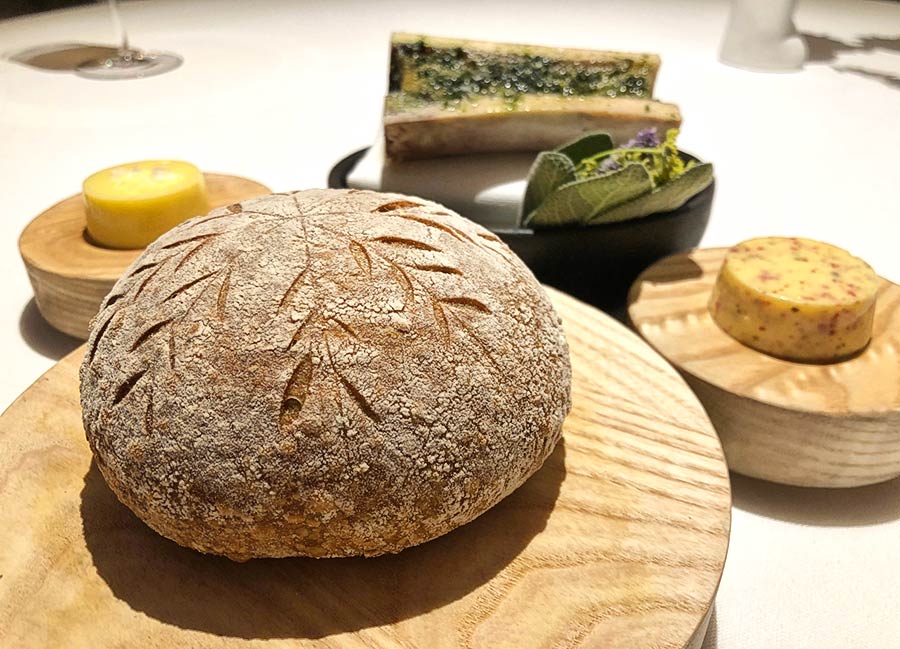 The bread course - sourdough with their own cultured butters - salted and pink peppercorn. Oh and did we mention the bone marrow too? 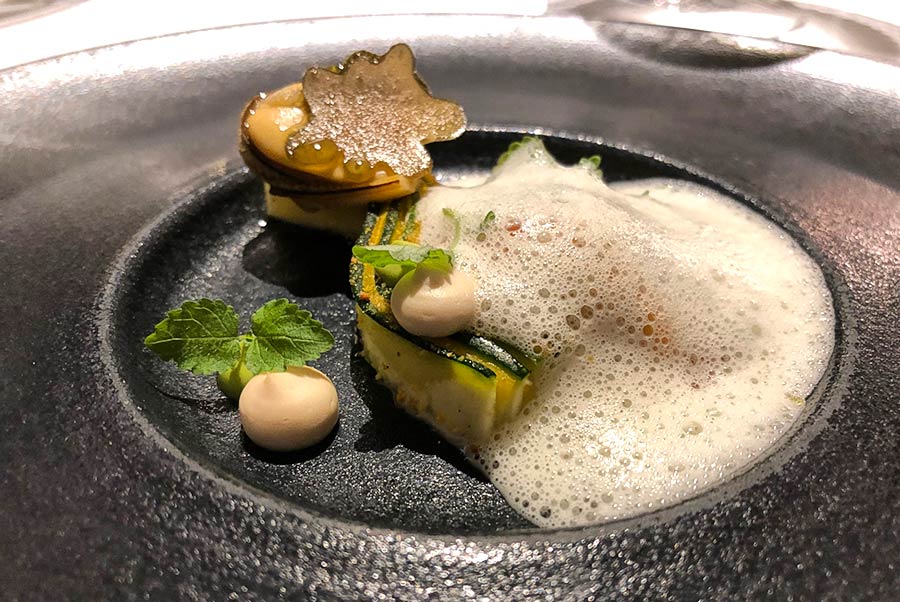 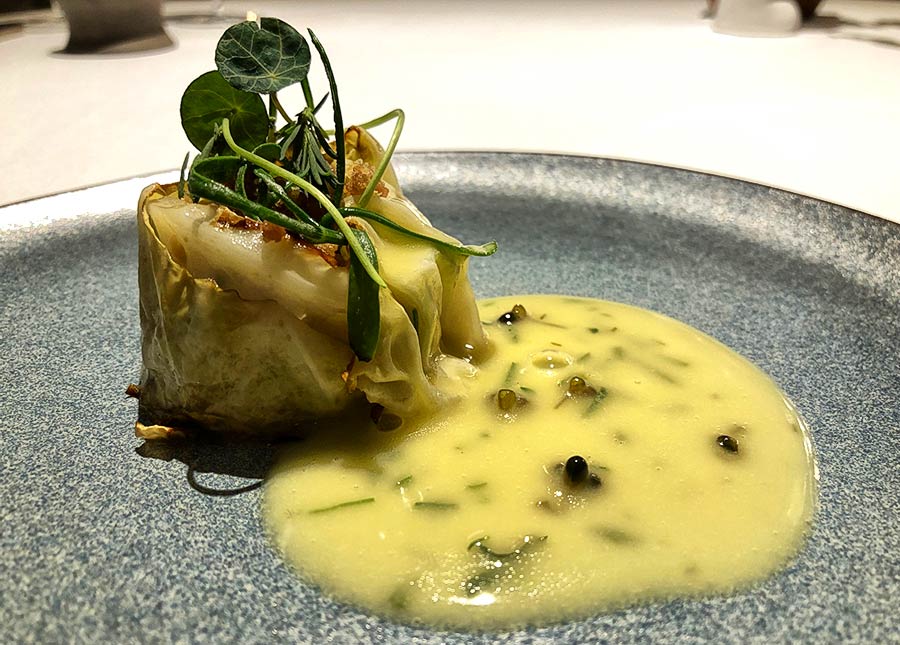 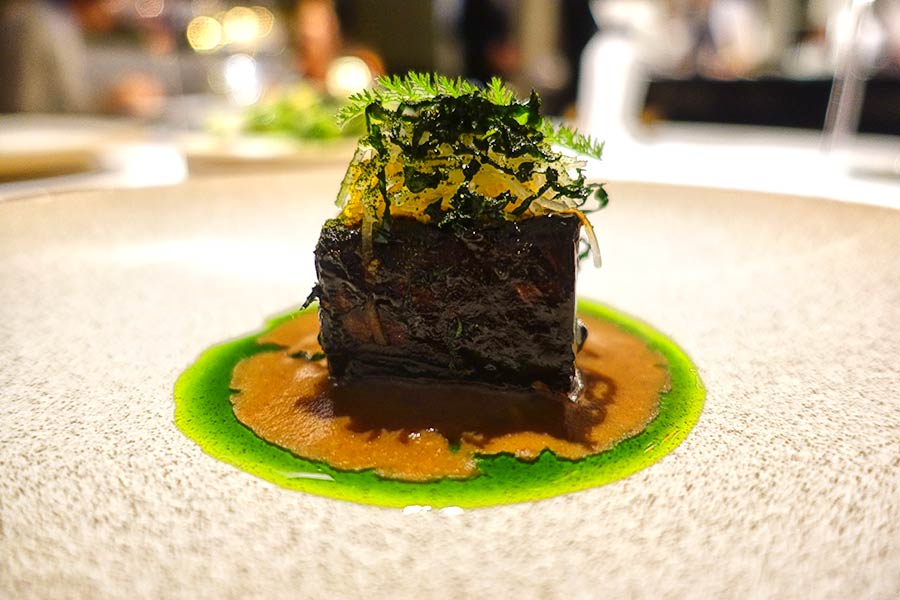 "Pork belly, black beans, farofa". A real South American dish, this was served with a "herb bouquet" as a palate cleanser between bites, that was tied in a lardo bow. 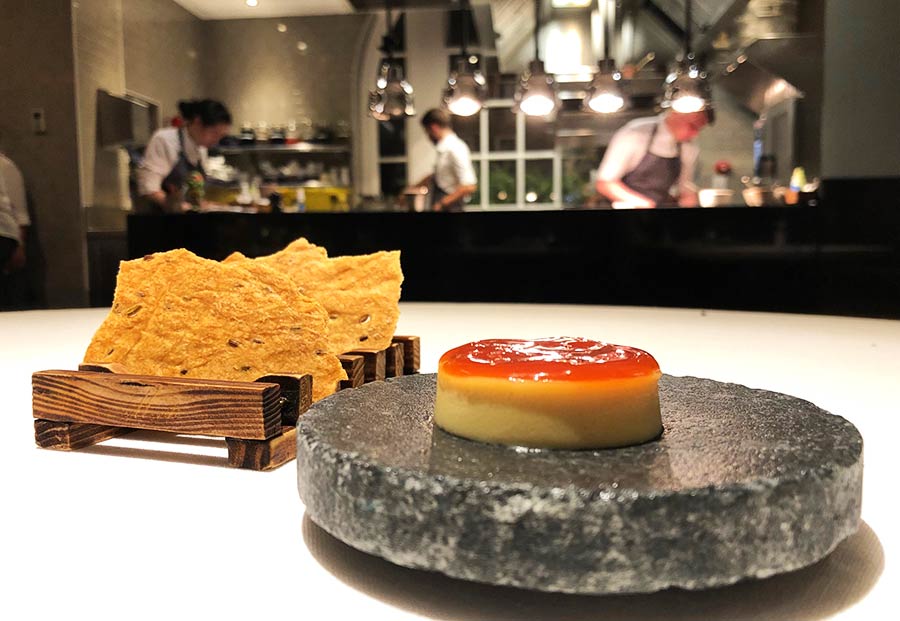 Their version of the cheese course, called "Romeo and Juliette" - that's Tymsboro cheese mousse topped with guava jelly with a Linseed cracker. We flat out loved this. 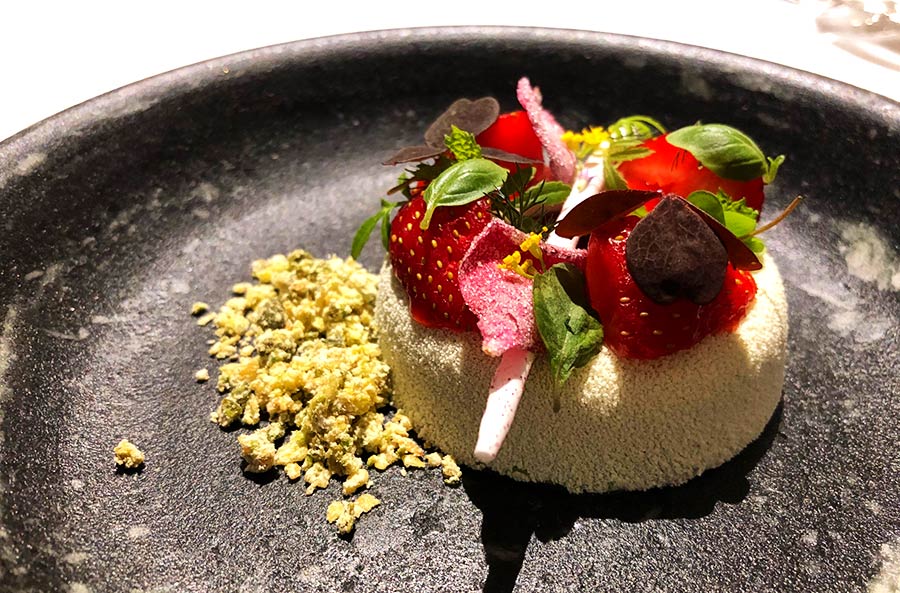 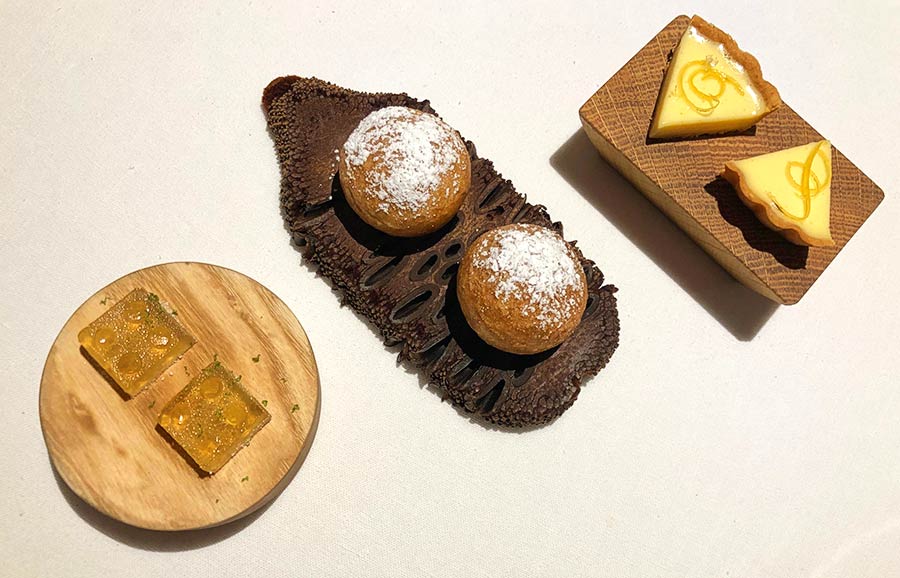 And, right at the very end, the petit fours are still amazing. There's the thinnest pastry possible on that lemon tart and the little lego-brick caipirinha jellies go very well with a post-dinner tequila. Just saying.

Each of the menus has a pairing option - £55 or £83, depending on the menu you've chosen - and it's a pairing that includes lager (low-waste Toast lager) and sherry alongside the usual wine. We'd say, if you can stretch to it, think about ordering the pairing (a favourite of ours on the night was the Wittmann Silvaner Trocken from Rheinhessen). On the wine list, wines start at £35 (although there is a Chilean rose for £30) - and the list heads upwards fast.

But if you're really in the mood for splashing out. head straight for the Italian white section - specifically from Emidio Pepe. Fancy a 2004 Trebiano? That'll be £800.

A familiar refrain that we've heard as we've been talking to people about Da Terra has been - "that place is great, why aren't more people talking about it". And it's true - we had what we would describe as an exceptional meal at Da Terra. We loved everything from the vibe of the room right through to a tasting menu that didn't put a foot wrong. We just couldn't understand why we hadn't heard more about it on the grapevine. So let us help spread the word - this is by far one of 2019's best new openings in London - and urge you to go.

The Town Hall has done it again, opening yet another wonderful restaurant (it really has quite a good batting average). Da Terra comes highly recommended. We loved it, and think you will too.

Hot Dinners ate as guests of Da Terra. Prices are correct at the time of writing.