A look at Cucina Del Mercato (this shows about half of the space).

What can you tell me about Eataly?

If you haven't heard of it yet, it's best described as an Italian food superstore - but even that feels like underselling it somewhat.

Eataly began in 2007 in Turin and then expanded all over the world before its latest opening - this London behemoth. It's a 40,000 sq ft combination of shops, bars, food stands and, of course, restaurants and bars. It's really quite massive and there's an awful lot to it - here's our guide to all the shops and restaurants.

There's so much to cover, but right now we're specifically looking at their Cucina Del Mercato restaurant.

Where can I find it?

Eataly itself is literally right next door to the main Bishopsgate entrance to Liverpool Street Station. Come up the escalators from Liverpool Street and you'll see it directly on your left. As for Cucina Del Mercato - that's on the first floor, far corner of Eataly (near the massive cheese counter).

So what's the Cucina Del Mercato

It's one of the main restaurants at Eataly, alongside their terrace restaurant, La Terrazza di Eataly, Pasta e Pizza and Terra (which will be opening later this year). The restaurant is designed to showcase the food that's available in the market - so you'll see food from the bakery, butcher, fishmonger and more put to good use here.

There are two key parts. There's the daily specials where they'll really take advantage of the latest produce. That's where you'll find the meat, fish and cheese specials along with some wines taken from their extensive collection (there's a huge wine shop on the same floor).

Elsewhere on the menu, it's a collection of cheese, hams, raw and cooked fish, grilled meat from the butcher and more. Here's a sample of that: 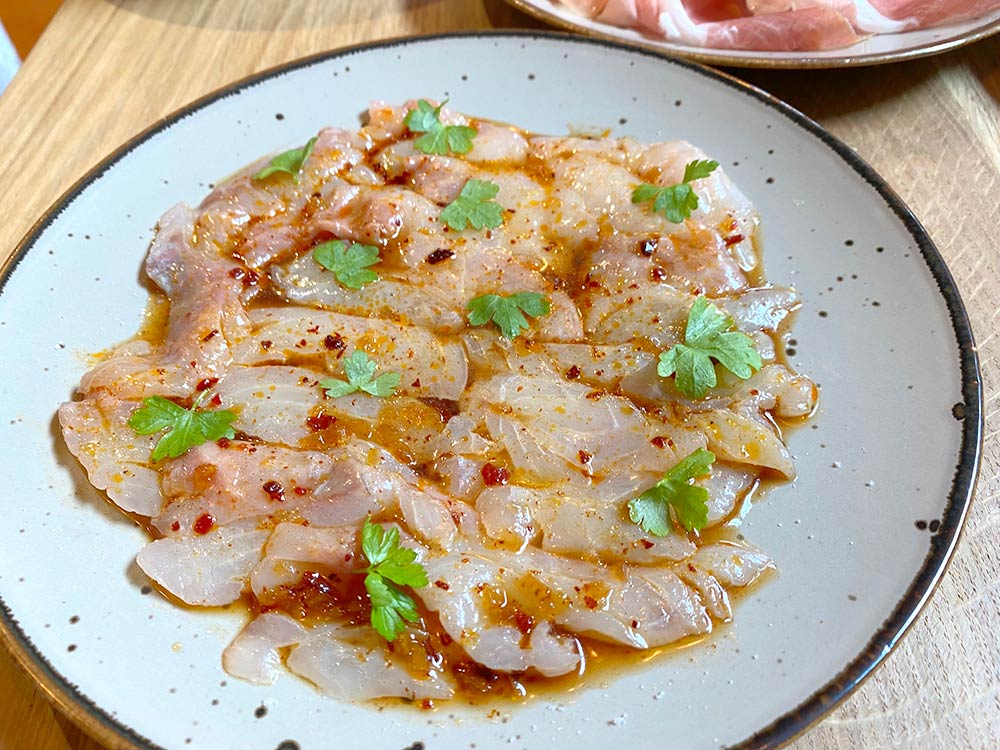 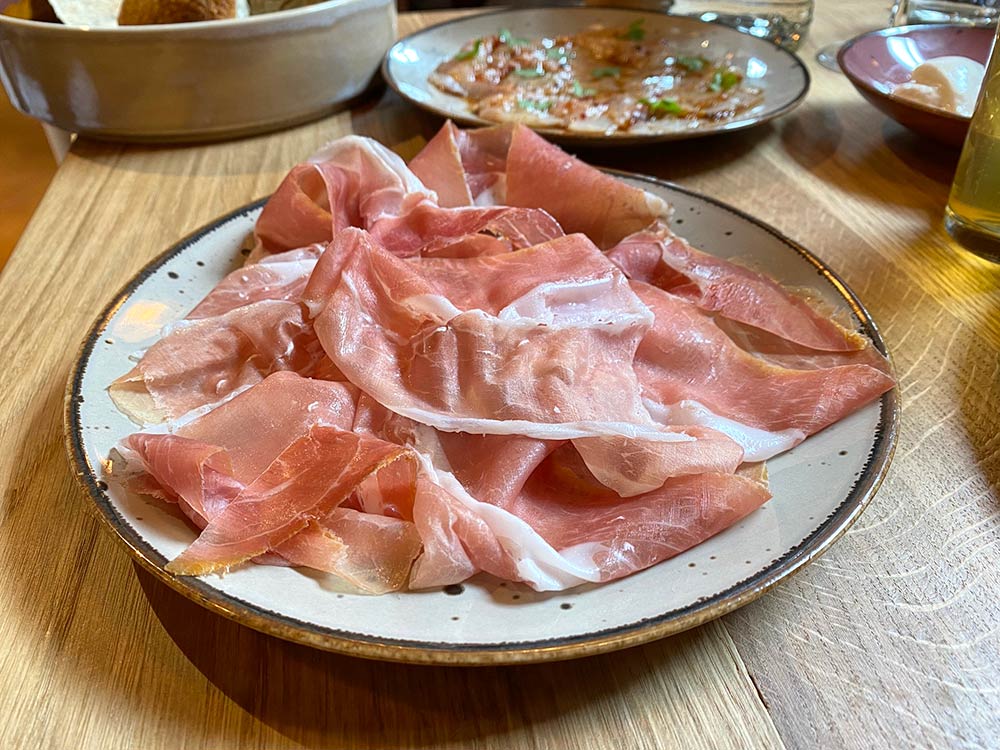 16 month aged Tuscan ham (£7) - once again, a really generous portion. You do get your money's worth.

Burratina (£7) from the daily specials menu. The burrata and stracciatella is going to be the freshest you'll find, mainly because you can see them making it on the burrata kitchen on the same floor. If you don't order this in the restaurant, then taking some home is a must. 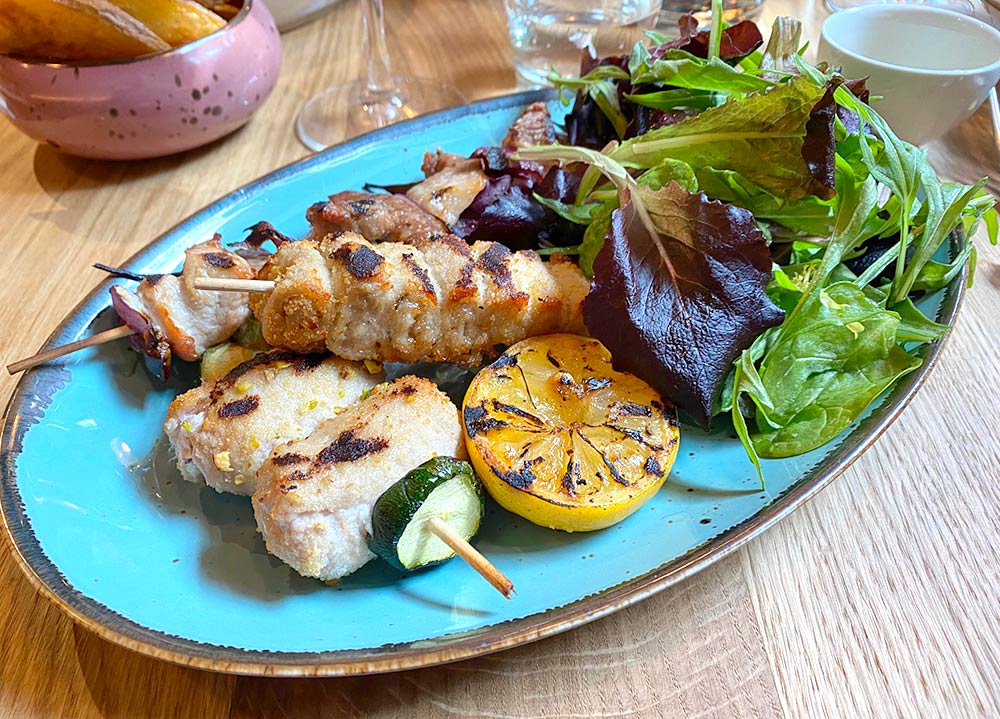 Also from the daily specials menu, this selection of filled meat (£24) with croquettes, skewers and more on offer. There's a huge selection on offer here - this was almost too much for one so it'd be a good sharing plate. Vegetarian versions are available too. 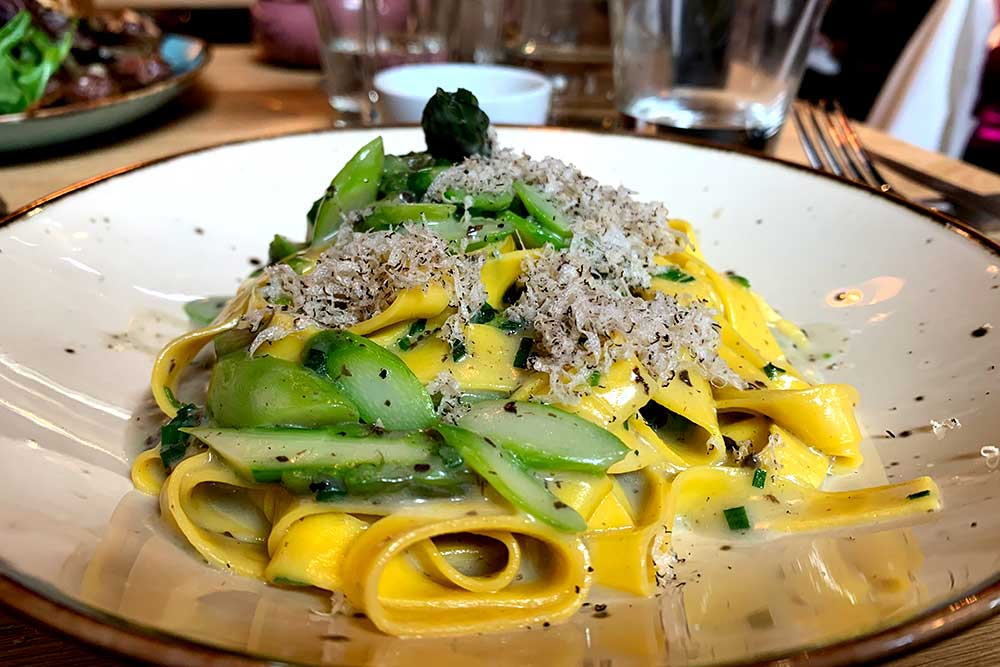 Homemade tagliatelle, sautéed asparagus, pecorino Romano & seasonal truffle (£22) - you should be able to tell from the colour of that pasta how good it tastes and you'd be right.

As mentioned, take a look at the specials list for select bottles from their cellar - otherwise it's, understandably, an all-Italian list. Prices start at £6 for a 125ml glass or £29 a bottle alongside Italian beers, and cocktails (an Aperol Spritz is £8) as well as Italian liqueurs.

There are just two dishes on the dessert menu (which we didn't get to) - a tiramisu or a chocolate cake. Alternatively, you could also order something from the dessert menu in the next-door pizza restaurant, but we think this marks the time to get on with some post-dinner shopping and then finish off with a gelato from the counter downstairs.

Eataly has been an instant and huge hit, pairing a pretty incredible shopping experience with genuinely good food in the restaurants (with produce fresh from the store). It's redefining what we should expect from a store-based restaurant and quite unlike anything else you've tried.

Hot Dinners ate as guests of Eataly. Prices are correct at the time of writing.