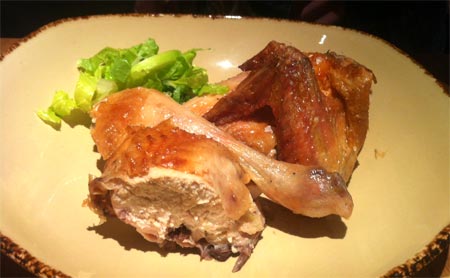 London's obsession with chicken continues unabated, which is how we found ourselves one weekend lunchtime at one of the newer spots, Clockjack Oven. It's probably to safe to say they're hoping, if successful, to roll out more of these around town.

Tucked away on a side street behind Piccadilly Circus, where the lovely old New Piccadilly Cafe once was, it's in a handy spot for weary shoppers to fall upon, and when we were there on a Saturday lunchtime, it was busy with families and people heading to nearby matinees.

As a one-dish restaurant, rotisserie chicken is the thing here. The chickens are French Bresse fowl and they slowly turn in a couple of massive rotisseries behind the main counter. The menu allows you to order between 3 or 4 pieces, or you can share a chicken between you. The chicken's clearly decent meat - which is what you're paying for - dense and well-flavoured with nicely cooked skin.

Twice cooked chips were nicely crispy and the sage and onion deep fried balls with the salad were a fun touch. If we were to be pernickety - the buttermilk fried chicken nuggets had either been sitting around too long or had been fried for too long and were consequently a bit leathery.

We also went for a CLT - a shredded chicken torpedo (£6.95) which we thought would actually be made with warm chicken, so were slightly surprised to find instead contained cold chicken, a missed opportunity - maybe they'll do a hot one too in due course.

Clockjack Oven is a more sanitised evolution of the dude food trend - it's bound to be a big success. And we agree with pretty much everyone who's been so far, they need to lose the waiting staff T-shirts saying 'Undress me' - it's not Hooters after all. Service is super friendly and the restaurant itself is comfortable, fresh and modern.