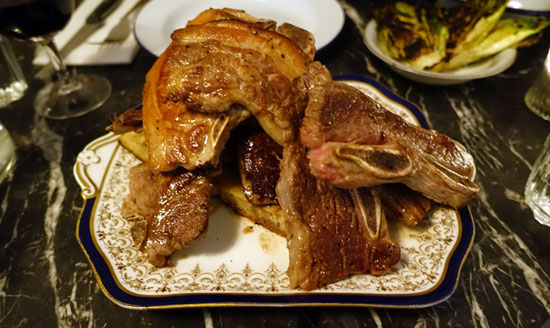 What do we need to know about Blacklock?

Blacklock has taken over a basement which once housed a brothel - but you'll be relieved to hear it's been seriously spruced up since the new owners came on board. It's part bar and part basement - both offering very good value for this part of town. The food all revolves around grilled chops, while the drink features mainly cocktails for a fiver and wine on tap.

It's on Great Windmill Street (just off Brewer Street), so only a few minutes away from Piccadilly Circus tube

There are quite a few options around this part of Soho. The bar either upstairs or downstairs at the nearby Zedel is a good bet, when it gets warm again the outside bar at Ham Yard is definitely worth grabbing a table and the bar at Mele & Pere is good too. If you can get in - which we almost never can - there's also Mark's Bar at Hix Soho which is well worth trying.

And drinks at Blacklock itself?

The main thing that will grab your attention from the drinks menu is that all the cocktails are a fiver - and they're very, very good for that price. The nettle gimlet and the Grandma's Spiked Lemonade (lemonade, vodka and sherry) were both excellent. It's admirable that they appear to be made to order - but this can slow down the delivery a bit, particularly when they are clearly so popular. That popularity might prove their downfall, but there would be no shame in it if they were to go to ready-mixed. That said, you can also order a whole bottle of cocktail for your table - either the Aperol Negroni or the Old Fashioned at £45 a bottle.

As there are no reservations, the usual drill applies - wherever you can get a seat. Since they opened, they've been rammed, so bear that in mind when heading down. While waiting you can grab a drink at the bar or they'll call when a table is free. If you do have the choice of a table, we quite liked the tables in the alcoves where we were sat (pictured below) and the huge table down the middle will be great for bigger parties.

As mentioned, the menu centres around chops - but there is more available. The snacks are particularly handy if you're waiting at the bar - three selections of crackers with toppings - egg and anchovy, ham or cheese and pickle. Ideal to make your way through with a cocktail or two.

As for the main event, you can choose either individual chops (£4) or a stack (£11-£15) of beef, lamb or pork. But the real star of the show is the "all in" for £20 a head. This includes pre-chop bites and beef, pork and lamb chops all piled on top of Blacklock's charcoal grilled flatbread. This bread would be good at the best of times - but it's raised to another level once it's been soaked in the dripping juices from the chops piled on top.

And the chops themselves more than live up to expectations. Perfectly grilled, you'll be picking them all up to gnaw away at every last bit of meat before the meal is over.

Sides are £3, the best of which were the 10 hour ash roasted sweet potato (get at least one of these for each diner) and the charred courgettes are also worth ordering.

It's not on the menu but, oh yes, there is indeed dessert. There's only one option - the white chocolate cheesecake currently being served with poached rhubarb on the side. It's magnificent and made better by allowing you to choose as large a portion as you can manage at that point in the meal (at least "large" we'd recommend).

Blacklock is another addition to Soho in the mould of Flat Iron - a simple menu done very well at a steal. Add in the quality of the chops themselves and very good value on the drink front AND a humming basement atmosphere and these guys have a real winner on our hands. It's already a huge hit.

Hot Dinners ate as guests of Blacklock. Prices were correct at the time of writing.