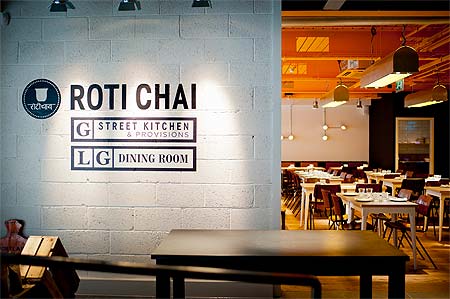 What can you tell me about Roti Chai?

It's an Indian restaurant nestled in the heart of Mayfair - but with a difference. Roti Chai's main speciality, and one you'll see as you enter the brightly lit first floor, is of Indian Street food. So the restaurant is split into two - the upstairs mainly focuses on the street food aspect, but the downstairs is a more traditional Indian restaurant. We decided to pay a visit to the upstairs section.

It's right in the middle of Mayfair - just around the corner from Selfridges on Portman Mews South. So a good choice if you're in the Oxford Street area.

A remarkable cross-section, it would appear during our visit. There were a number of Mayfair types, Indians who have come to sample the street food and those who have popped in to escape the crowds on nearby Oxford Street. Given the swiftness of the service and a certain small-plate aspect to the food, it's ideal if you want to pop in for a quick bite - and the owner told us that it's very popular with the working lunchtime crowd.

Where should I meet for a drink first?

There is the Three Tuns pub which is right next door to Roti Chai if you fancy a quick pre-dinner pint, or why not pop around the corner to Selfridges if you fancy trying something new from the many enomatic machines in the Wonder Bar.

We wouldn't say there's any particular seat to aim for and as the street food floor is for walk-ins only, just turn up and grab whatever free seat is available.

What would you recommend ordering?

You certainly shouldn't leave without ordering the chicken lollipops - delicious Keralan spiced chicken wings and a dip that we would happily have snacked away on all night. Roti Chai is almost worth visiting for these alone. Other highlights were the buns - essentially an Indian equivalent of the burger craze that's sweeping through London at the moment. You can opt for the vegetarian bun tikka, which we did enjoy, but still paled beside the bun kebab - a lightly spiced lamb kebab burger that we wished we'd ordered one each of instead of opting to share.

Other highlights were the excellent samosas and - keeping us going between dishes - the glass of banana chips. We were also very impressed by the gooey chocolate and cardamom tart, even though it was a dish too far for us.

The reason for our careless over-eating came from choosing some curries from the "road and rail" menu. The railway lamb curry really stood out here, alongside some excellent aloo gobi and roti. However, we felt that we would have preferred to continue sampling from the street menu rather than go into what were more traditional (but exceptionally well made) curries.

We were very happy to see Sam Adams on the menu. It may not be an Indian drink but it's this writer's favourite beer and the only alternative was a Moosehead. So drinks do steer away from the Indian origins of the rest of the menu - with only the cocktails and "sharbats" (Indian vellinis) veering in that direction. Otherwise there's a short wine list with bottles ranging between £17.50 and £30 and a number of spirits and more on the short drinks list.

And how much is this going to set me back?

Perhaps a little more than a standard curry house - but really not by much. The chicken lollipops are only £4.80 and the road and rail curries are in the £7-£9 price point.

Roti Chai serves great Indian food that's well removed from the usual night out for a curry with its bright and airy room and it seems well placed for a quick bite to eat if you're in the area. We'd stick to the street food side of the menu as opposed to the traditional curries - but both are worth a punt if you're in the mood. Just make sure to try the chicken lollipops.

Find out more about Roti Chai

Hot Dinners were invited to eat at Roti Chai. Prices are correct at the time of writing.