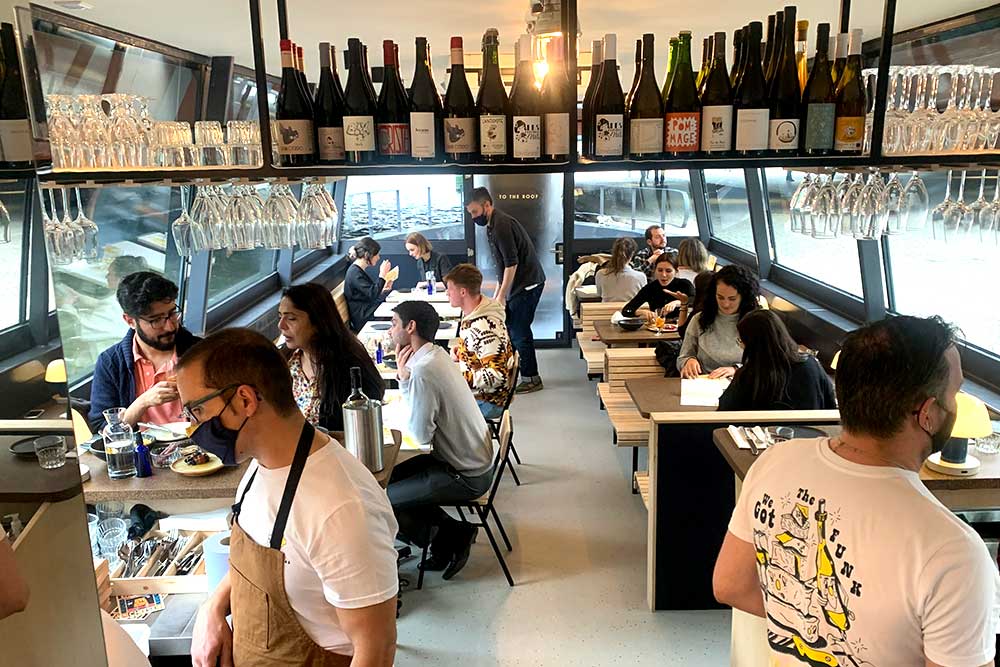 Inside The Cheese Barge

What can you tell us about the Cheese Barge?

Put simply, it does what it says on the tin - so lots of cheese served on a barge. But there's a lot more to it. The barge is from the people behind The Cheese Bar in Camden and another cheese sensation, Pick n Cheese, the cheese conveyor belt restaurant in Covent Garden. Both have been big hits and outside of the gimmicks, showed that the team was very much focused on delivering excellent British cheeses to the public.

This latest venture is closer to the original Cheese Bar in that there's a broader range of cheesy delights, from cheese boards, right through to bigger sharing plates. It's not really a place for the lactose intolerant.

It's parked on the canal, very near the entrance to Paddington Station (on the Circle line) - you'll see it just past the bridge between the Daisy Green and Grand Duchess barges.

The boat is moored there permanently, so don't expect a trip along the canal in it. However, it was custom-built for them, with a design based on the Electa bookstore in Venice. As such, there's a great emphasis on getting the best view possible, with much larger windows on this barge than you might have seen on some of the others moored on the canal. if you can get it, the best seat in the house is right inside the main door - a four-seater booth with a direct view out into the canal.

So it's all inside?

Not all - there's a rooftop terrace, with plenty of seating. That's more for drinking and snacking though as it does have a slightly reduced menu. So if you want the big sharing dishes (and you will) then you'll need to book a seat inside. 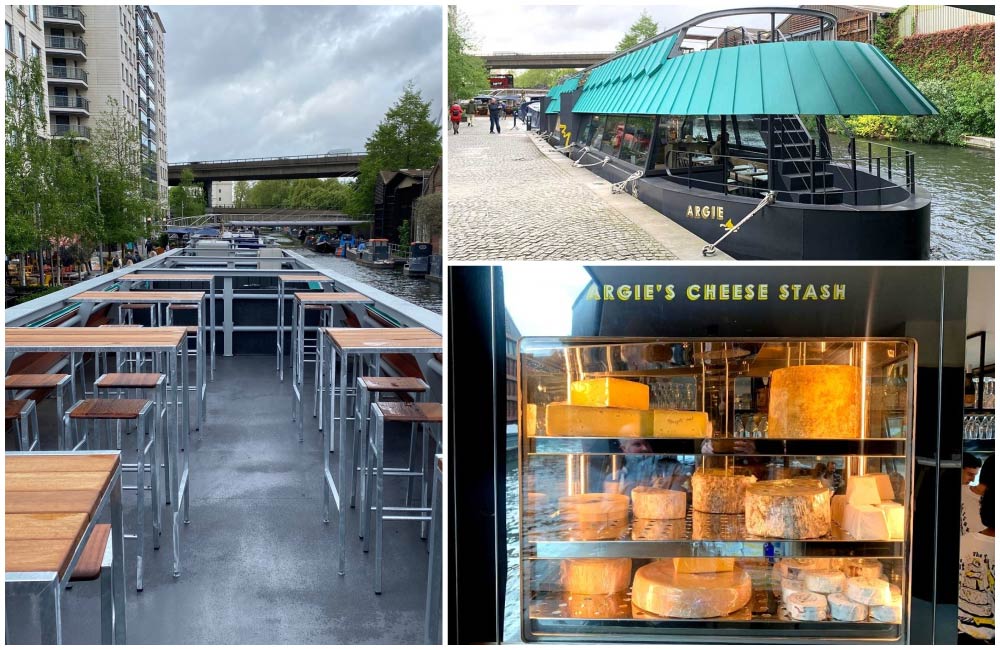 More of the barge itself, including the large roof terrace space. And yes, the boat is called "Argie"...

A lot of cheese - and we mean a lot. Almost the entire menu has some element of cheese as part of it - either front and centre in the cheese plates or sometimes appearing as a dip. The cheese is all British, with the menu designed to present some of the best cheese this country produces. British cheese producers need as much help as they can get at the moment, so this is a really great showcase for them.

Here's a taster of what's on the menu:

Westcombe fried curried cheese curds with chilli honey (£5.50). Extraordinarily more-ish snacks, particularly with the chilli honey that they're covered in. 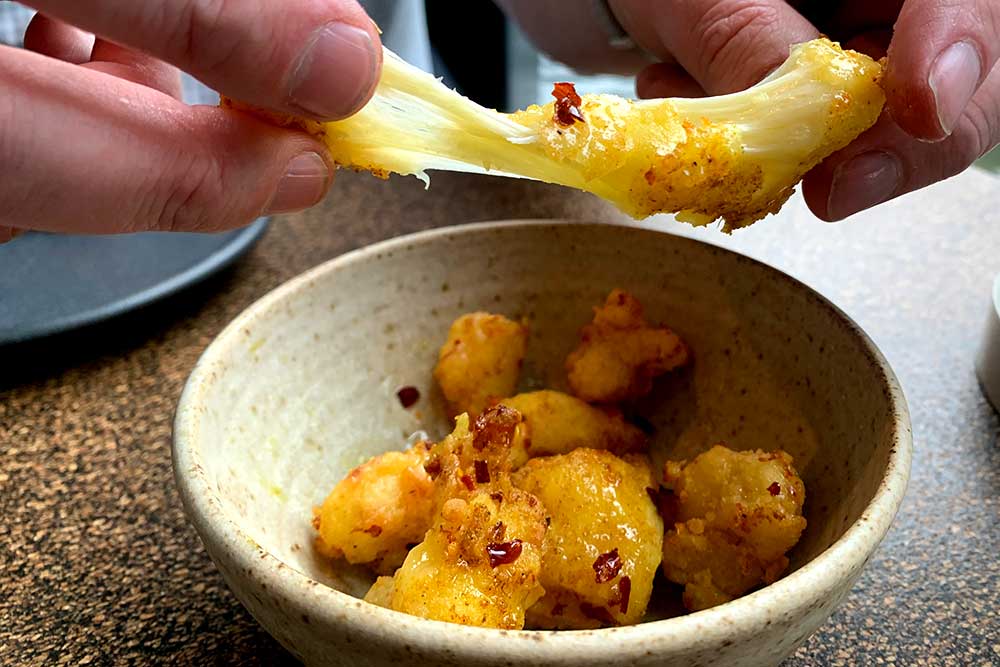 The cheese curds again - so stretchy! 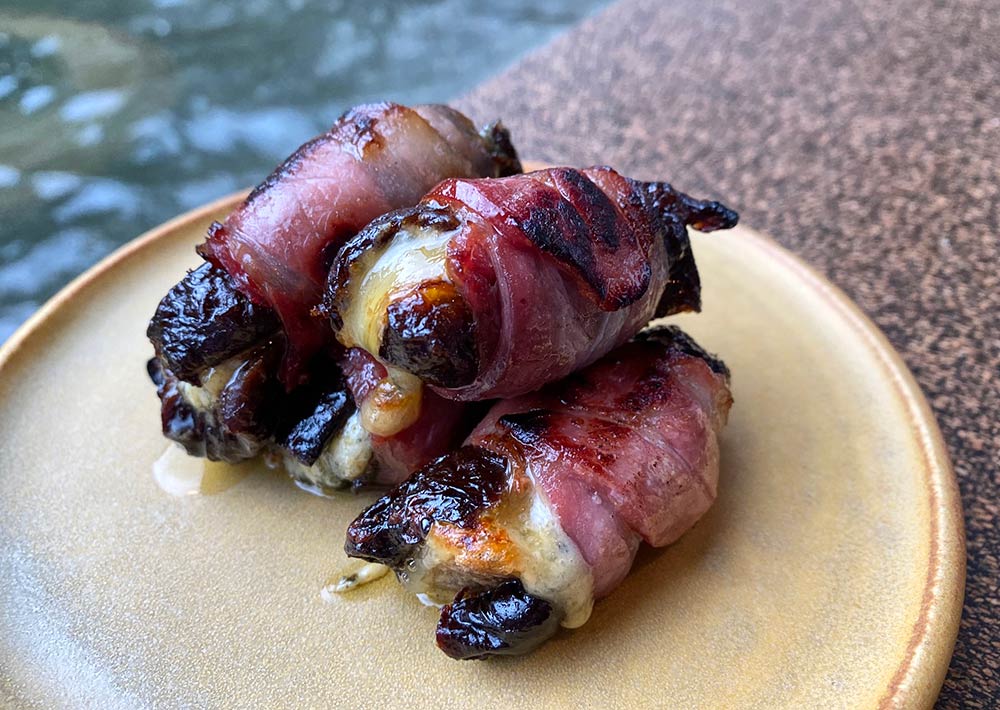 White Lake goats' curd, lamb scrumpets with pickled walnuts, mustard cress (£10). Note that here, the goats' curd acts as a dip or a sauce for the generously meaty scrumpets. 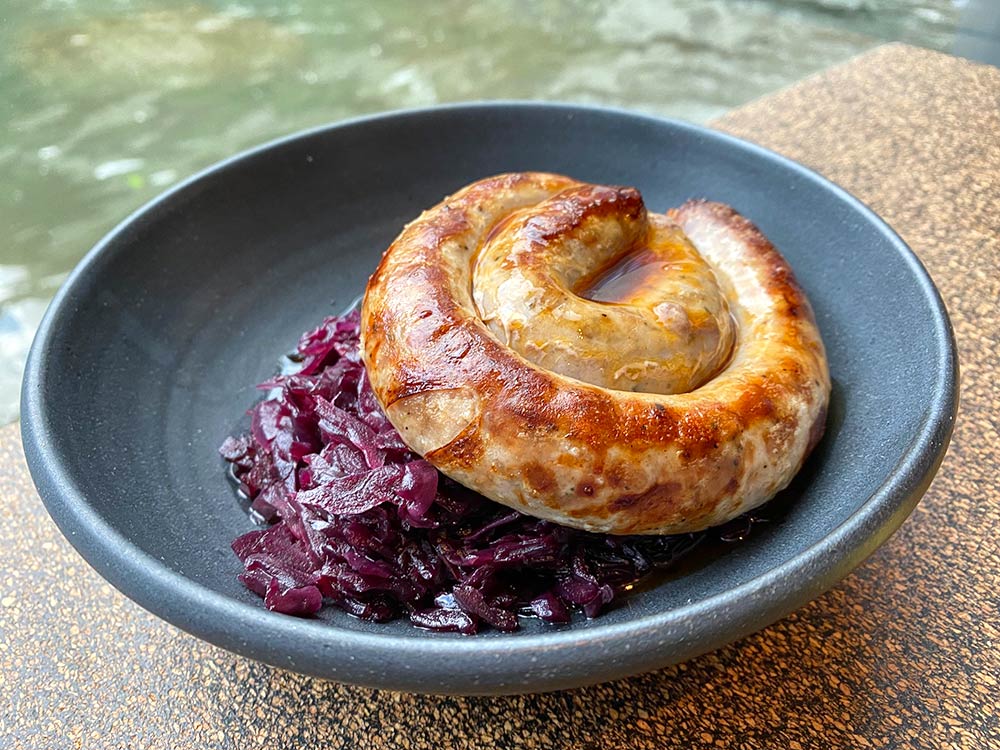 Pork, fennel & red wine sausage, braised red cabbage, chicken sauce. This makes for half of one of the mains, and it's paired with... 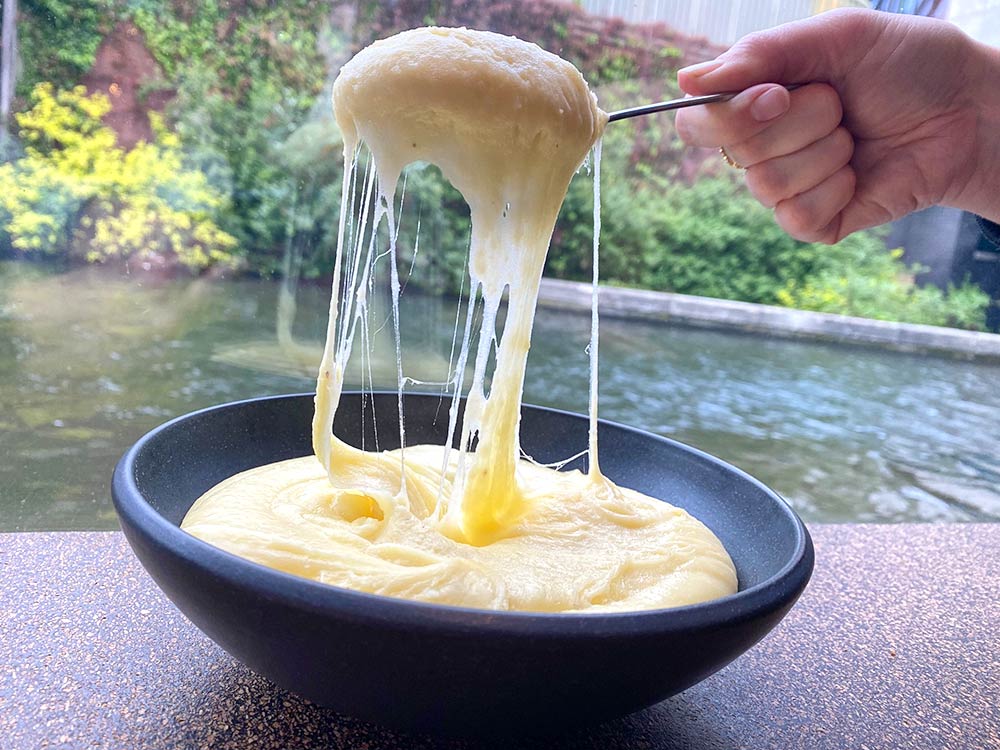 ...the cheesiest Kirkham's Lancashire aligot (£25 with the sausage above). This is billed as a dish for two - but if you've maxed out on snacks before, this is an easy sharing dish for three or more. It comes with a small pot of gravy, which makes it even more amazing. 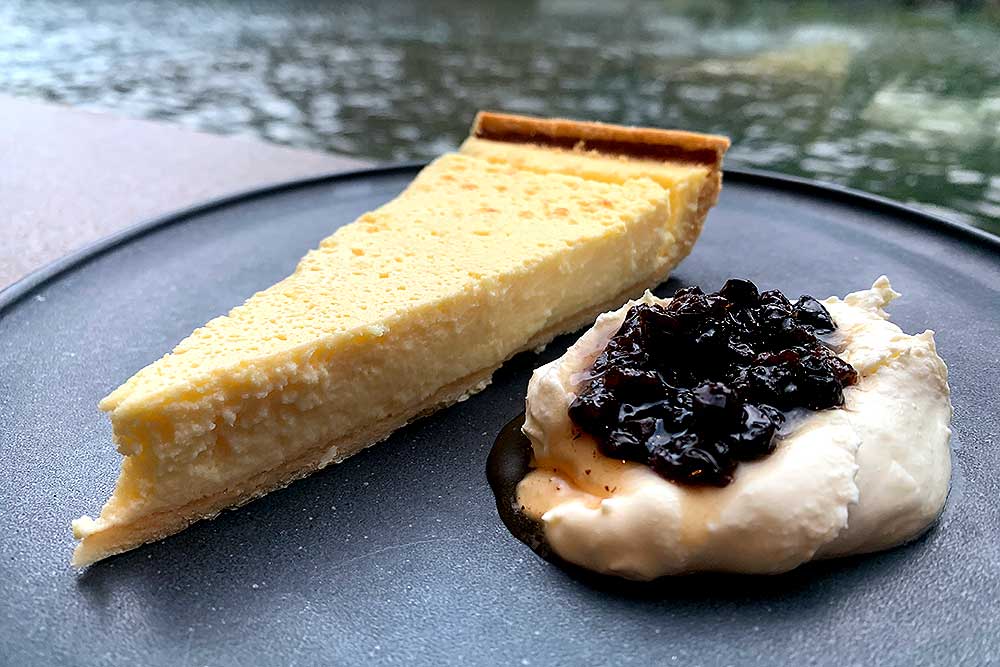 Jersey curd & cider brandy tart with boozy earl grey currants, whipped cream (£6) - yes, even the desserts have cheese in them. 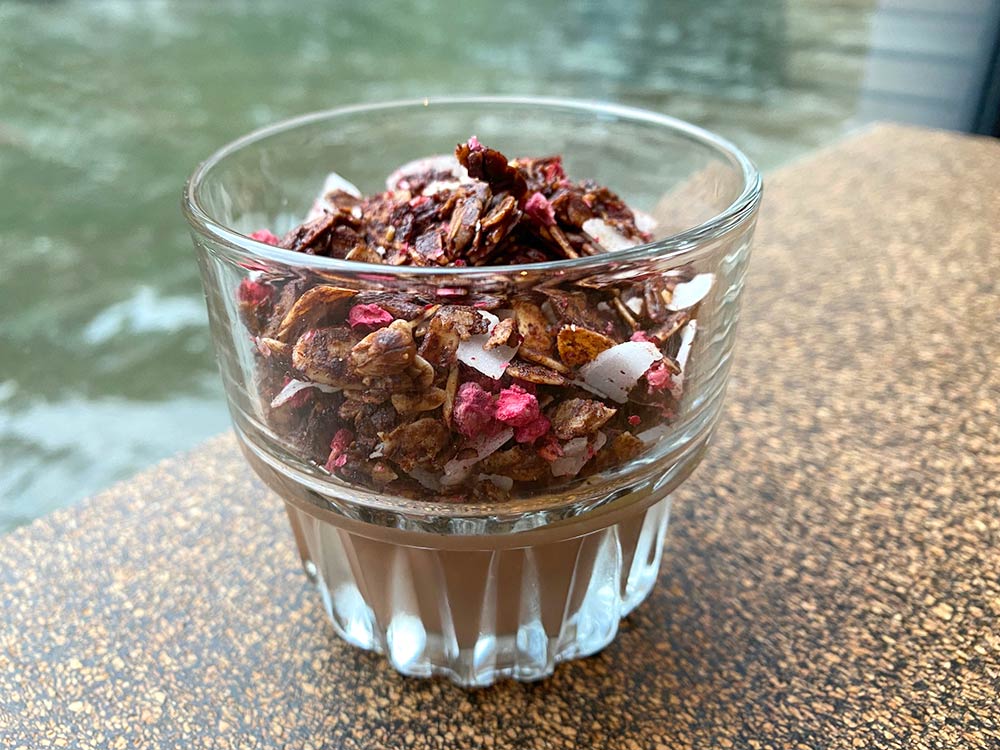 Malted milk chocolate crémeux, salted caramel, coconut, oat & chocolate granola (£6). Ending on a non-cheese moment (there are a few of them), this dessert deserves particular attention because of the combination of a deep crunchy topping and the chocolate/salted caramel below. A must-order.

Because of the richness of the dishes - you're going to have trouble making it through the whole menu in one sitting. In addition to the above, there's a range of cheese plates (£4 each or 3 for £10) that are similar to the ones you'll see on their conveyor belt and a series of grilled cheese toasties (including Brue Valley Mozzarella with smoked bacon and chilli honey for £7.50).

The other main sharing plate is also worth highlighting. It's a 400g Baked Baron Bigod that comes with Coombeshead sourdough, roasted new potatoes, grilled chicory, house pickles, dried fruits, seasonal crudités and Ampleforth Beer chutney (£32 for 2-3 people). We don't think you could have manage both sharing dishes in one sitting, so choose wisely...

There's a good selection of wines that should pair well with any of the cheeses on offer. A fair amount is by the glass, including an orange wine option, and on the main bottle list there's also a rotating by-the-glass option that changes daily. Prices are like the food - pretty good value, with wines starting at £26 a bottle (or £5 a glass for their house wines). There's a bottle of De L'Autre Cote (£44) on the list that's particularly gorgeous. Vermouth, port and dessert wines also make an appearance and there are a few classic cocktails on the list (circa £8). The drinks list paired with a few cheese plates would make for a pretty great night on the roof terrace, for sure.

Summing it all up

First off - here's a quick video of the whole thing:

We visited The Cheese Barge! It’s cheese… on a barge! 🧀⛴ ##cheese ##london ##restaurants

♬ (Sittin' On) the Dock of the Bay - Otis Redding

On paper you could be forgiven for thinking The Cheese Barge was something of a gimmick. But while it's a fun idea - and one we were fully on board with - it's actually so much more than that. With such a wide range of genuinely good cheesy snacks and sharing plates (and well priced too) it's the ultimate cheese-lover's dream with a great view to boot. It's clearly going to be another big success for the team.

Hot Dinners ate as guests of The Cheese Barge. Prices are correct at the time of writing.

Where is it? Sheldon Square, Paddington Central, London W2 6HY