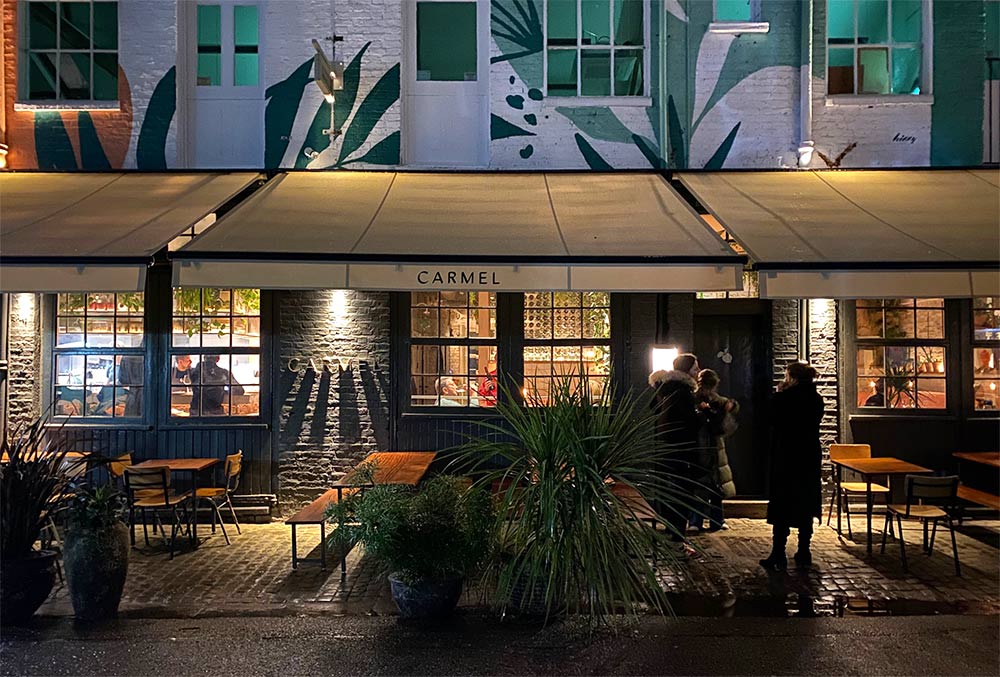 Looking into Carmel - it's actually slightly wider than you can see here.

What can you tell us about Carmel?

This is the latest restaurant from the people behind Berber & Q (and its spin-off Shawarma Bar), brothers Josh and Paul Katz and Mattia Bianchi. This sees them leaving their East London patch and expanding into West London with a brand new restaurant. it retains elements of Berber & Q - a Middle-Eastern focus for one - but sees them embracing a less casual and more traditional restaurant format.

You'll find it on Lonsdale Road, right next to Milk Beach (which we'd also recommend). Queen's Park and Brondesbury Station seem like the closest stations.

How does it look inside?

For lack of a better description, it seems more like a "grown up" restaurant than Berber & Q before it. That had a very much East London laid back vibe, perfect for its location. Here, there's much more of a mixed crowd so it skews more traditional - with a beautifully rustic, comfortable edge to it.

A special mention at this point to the toilets - which are almost like going into another world. They're like a little beautifully-scented refuge with light trancy music pumped in. It was almost like accidentally wandering into a spa; we wondered if we should be changing into a dressing gown and sliders before heading to our next treatment. All in a very good way, of course. 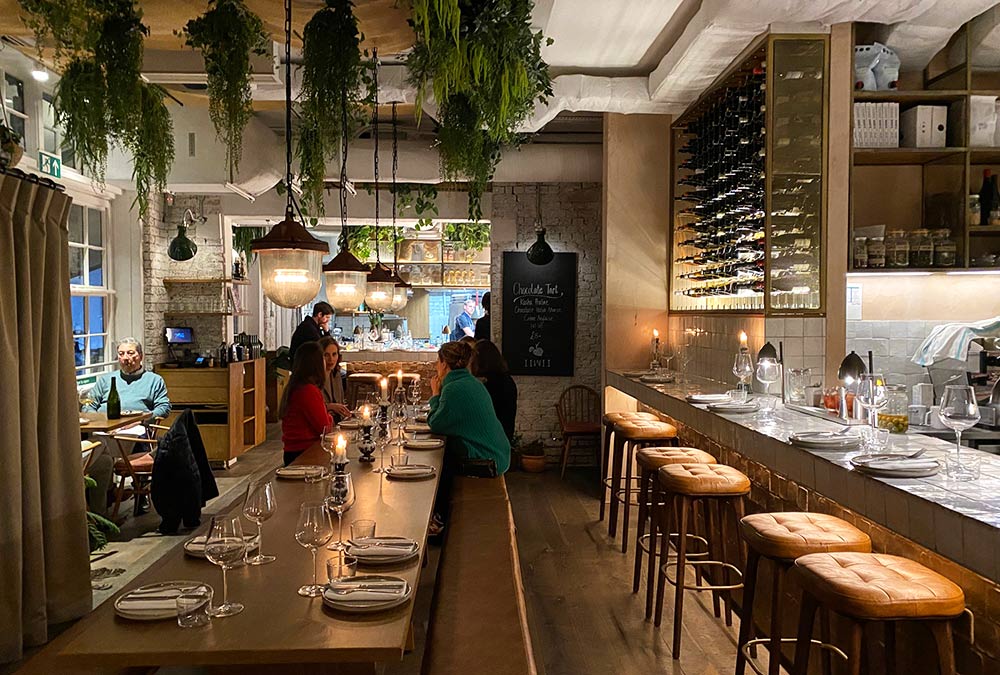 Inside Carmel, with the sharing table on the left and counter/bar seating on the right (and you can just see the kitchen at the back in the next room).

There are a lot of options available to you.

Like Milk Beach beside it, this is a wide restaurant, seemingly taking over two buildings (we're not sure about the history of the street). The left side hosts the open kitchen so if you fancy being close to the action you can grab a stool there. The right-hand side is a more traditional restaurant space along with more stools by the bar and a long sharing table that's either bookable by large groups (up to 12) or broken down into smaller groups, sharing the table.

There's also a huge covered terrace along the front and as the temperature increases, that should prove to be extremely popular.

Onto the food - what should we expect?

They say the main inspiration comes from North Africa and the Eastern Mediterranean with an evening menu that's split into snacks, flatbreads, small plates and larger affairs. Hummus and flatbread are a must, then a couple of small plated before sharing something larger.

Here's what we opted for: 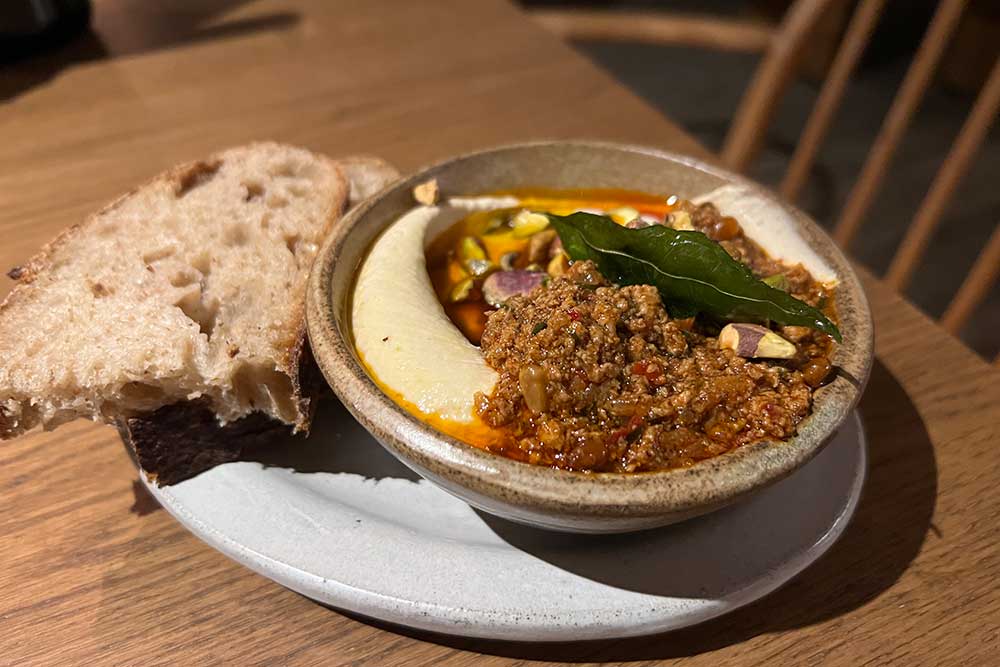 Hummus with lamb ragu, pistachio, curry leaf (£7) and there's also a non-meat version. Amazing hummus, frankly - the lamb ragu really enhances it all. We'd maybe have preferred some flatbread for dipping, though. 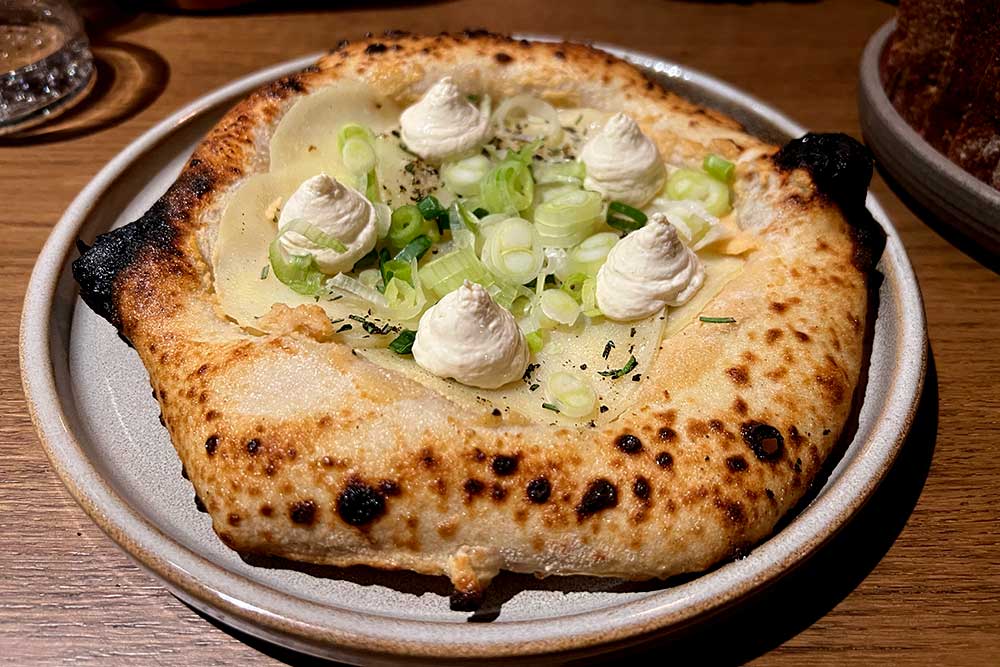 Tarama flatbread - cod’s roe, potato, rosemary (£9) - having heard great things about all of the flatbreads on offer (the mushroom version comes highly recommended) this cod's roe and potato mix lived up to its billing. 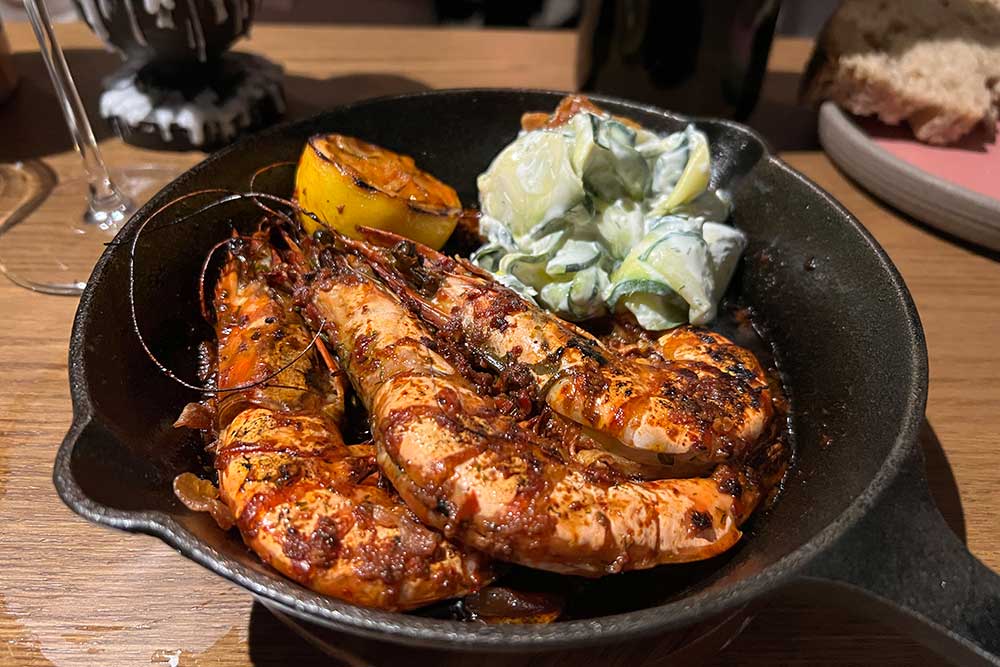 Grilled harissa prawns with ’nduja butter, courgette tzatziki, garlic crisp (£15.50) - the prawns are sliced and cracked open so you don't get covered in sauce trying to extricate them, and that tzatziki really compliments them well. 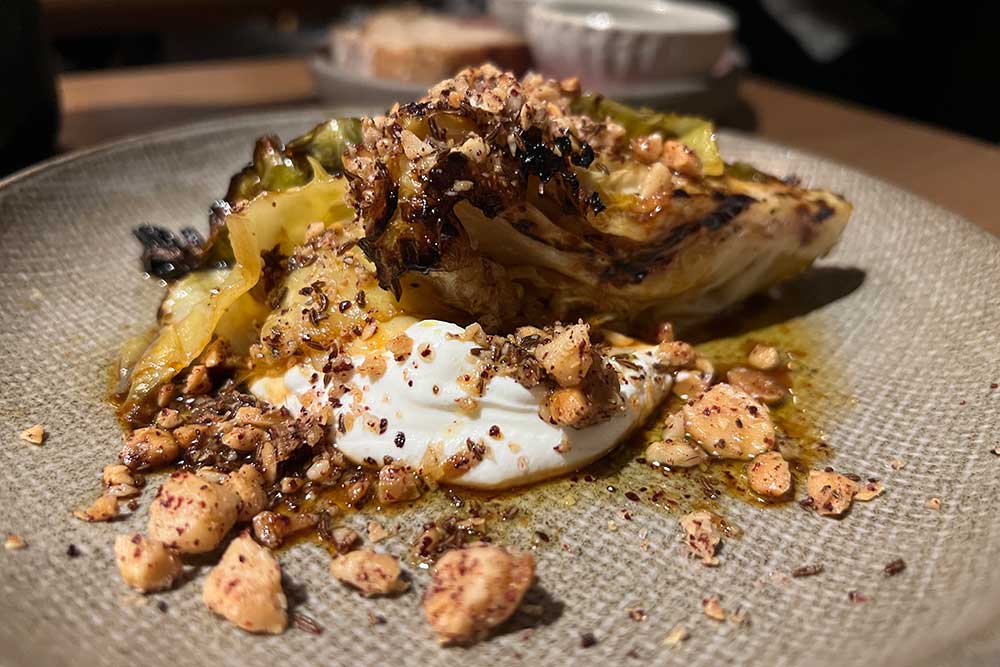 Charred hispi cabbage with labneh, ras el hanout, macadamia dukkah (£9). Hispi cabbage seems to be everywhere right now. This is a good addition to the mix but the price is a little punchy for the portion size. 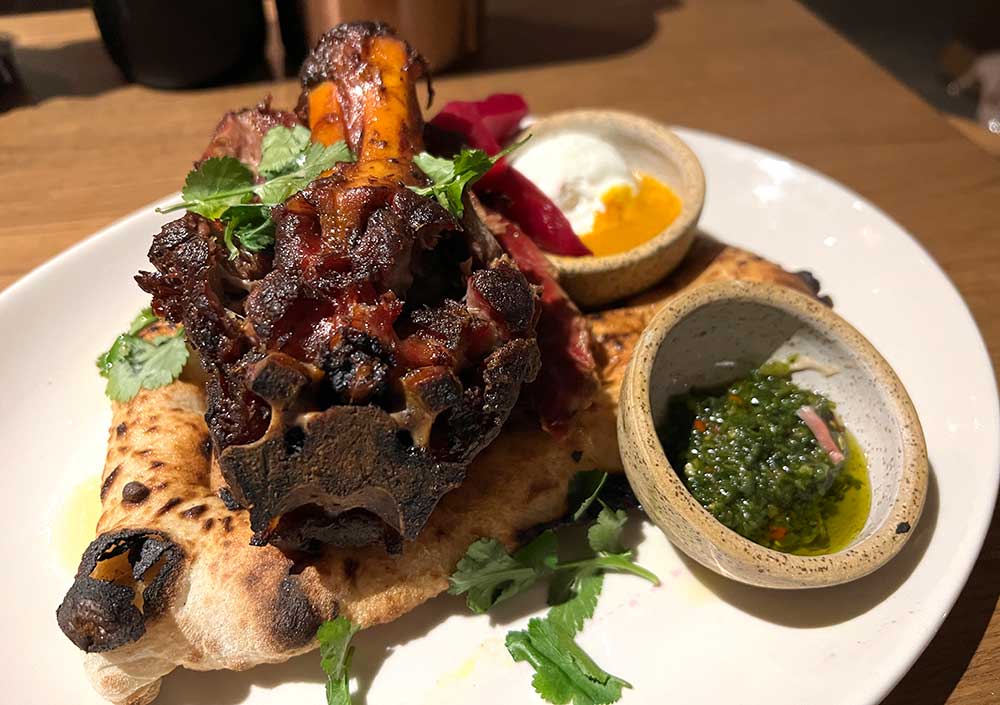 Smoked lamb neck shawarma with shio koji, garlic labneh, pickled turnip (£29.50) all rested on flatbread which soaks up the juice. 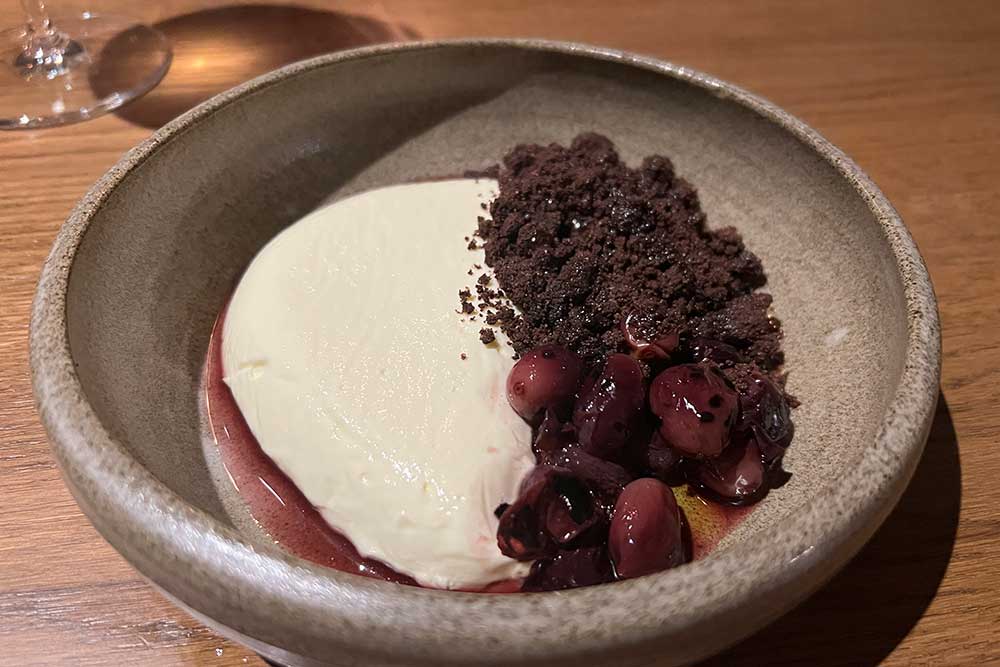 And things change on the menu throughout the day?

As well as specials (there was a chocolate tart on the blackboard during our visit) there's also a separate breakfast and lunch menu. Breakfast is still to launch at the time of writing but that'll include dishes like stuffed French toast with rose custard, grilled grapes and molasses, turmeric fried eggs and shakshuka. Expect this to be very popular with the brunch crowd at weekends.

The wine list, much like Berber & Q, has a focus on non and low-intervention wines, with prices starting at around £33 a bottle and only a few under the £40 mark. So it's a pricey list, but that can be par for the course in west London.

We weren't quite sure what to expect from Carmel when we heard they were opening in Queen's Park. It turns out to be something of an evolution of the Berber & Q offering - slightly smarter digs with a very homely (yet nice and vibrant) atmosphere with a more refined version of the cuisine that's won them plaudits in east London. It was heaving when we visited on a Tuesday night in January - so they're already proving very popular with the local area - and it's easy to see why. Great food in a lovely room with a buzzy crowd - just what you need to wave away the winter blues.

Hot Dinners ate as guests of Carmel. Prices are correct at the time of writing.