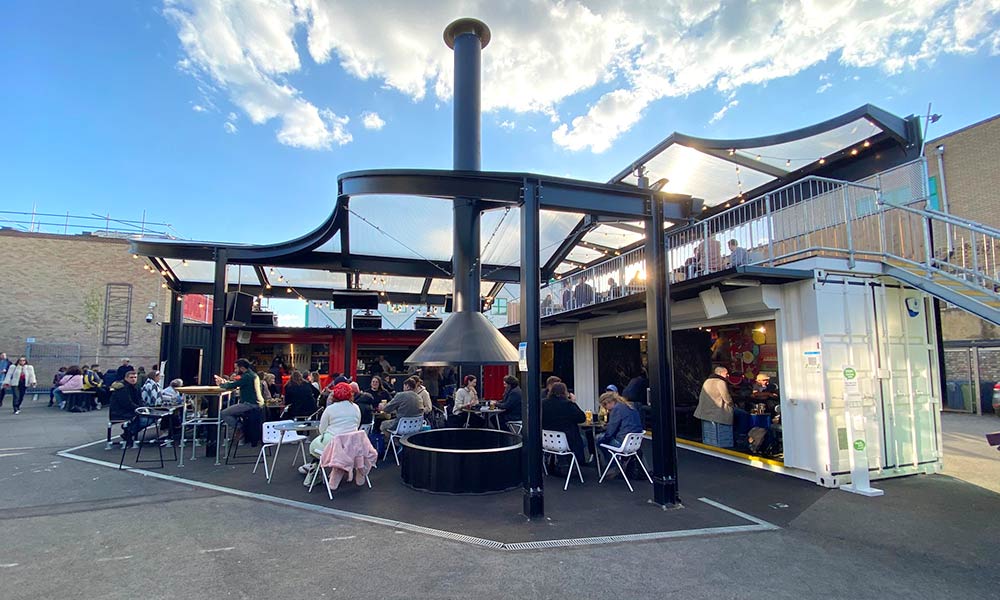 The main bar and dining area at Campfire - with balcony seating above.

What the story about Campfire?

Campfire is the latest creation of Two Tribes, right next to their brewery on the outskirts of King's Cross. It's essentially an alfresco space that they've built outside their brewery, using a combination of shipping containers, terrace space and more. They've also installed a purpose-built kitchen for outdoor cooking, with new stars of BBQ, From The Ashes in charge of the food.

Where can I find Two Tribes?

It's off York Way, a road that runs past King's Cross but it is about a 15-minute walk from the station, hidden away within the Tileyard industrial estate. We'd recommend you make sure you look at where it is on the map below or on your phone before setting out, that'll help you pinpoint it easier. Or just hop on a bus.

And it's an all-alfresco affair?

It's all outside yes, but a large part of it is covered. Looking at the picture above - you can see that the central area is all under-cover, but the place to be (if you can nab a table there) is the balcony section that you can just see on the upper right. That's all covered too and is closer to the heaters, which makes it very handy if it gets a bit chilly.

On a nice day, there's even more non-covered seating around the outskirts. And because you're nowhere near any residential areas (it's much more industrial up there), there isn't an early closing time.

So what about the food?

Two Tribes have brought in From The Ashes BBQ to be in charge of the food - every Thursday to Saturday. They're Frank Fellows, Martin Anderson and Curtis Bell who have previous BBQ experience with Temper. They set up their own BBQ business during the very first lockdown last year as a take-out hatch in Hackney (which is still going strong). They've already teamed up with Two Tribes for a delivery version of one of their signature dishes - which we tried earlier this year:

That was the BBQ smoked pork, n’duja, chilli jam and crackling all sandwiched between a sugary doughnut. It's one of their signature dishes and if you see it on the menu at Campfire, make a beeline for it. At Campfire, here's what's on offer at the moment: 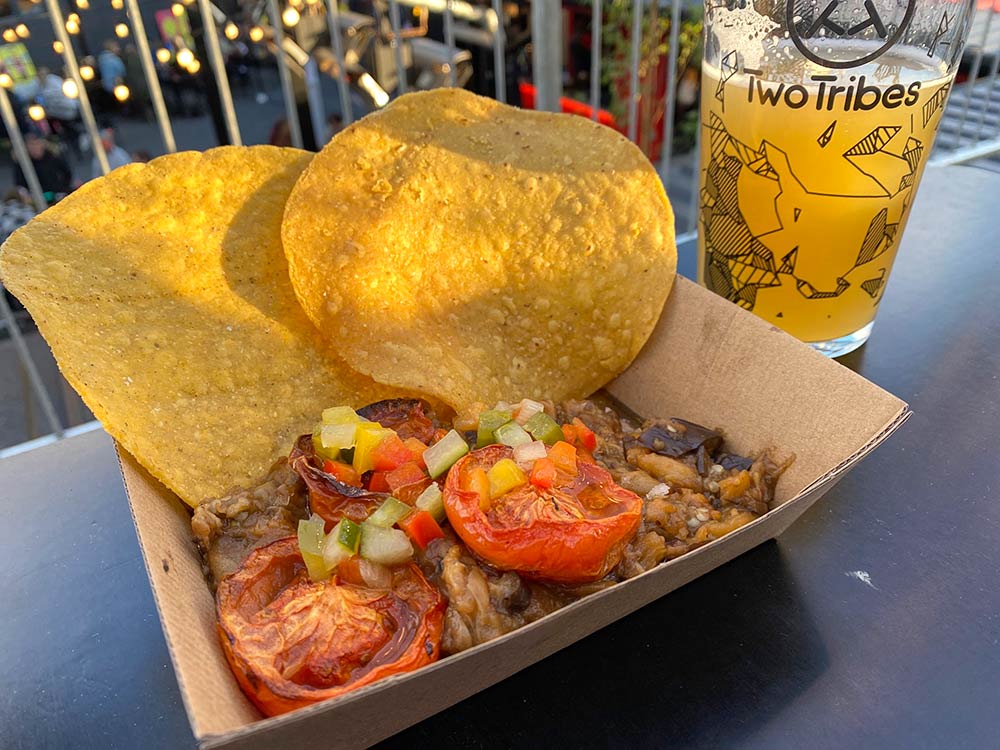 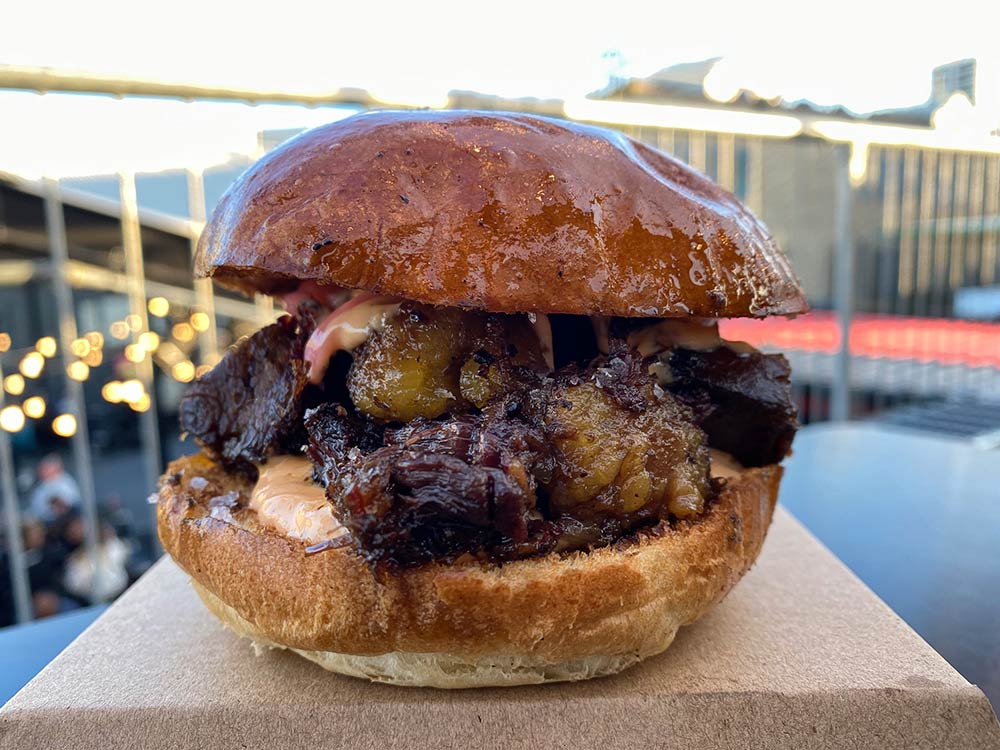 They may not have the doughnut on at the moment - but there is this drop-dead wonderful smoked beef bun with BBQ sauce and red chilli pickle. It rivals the brisket bun at Smokestak - which should give you an idea of just how good it is. 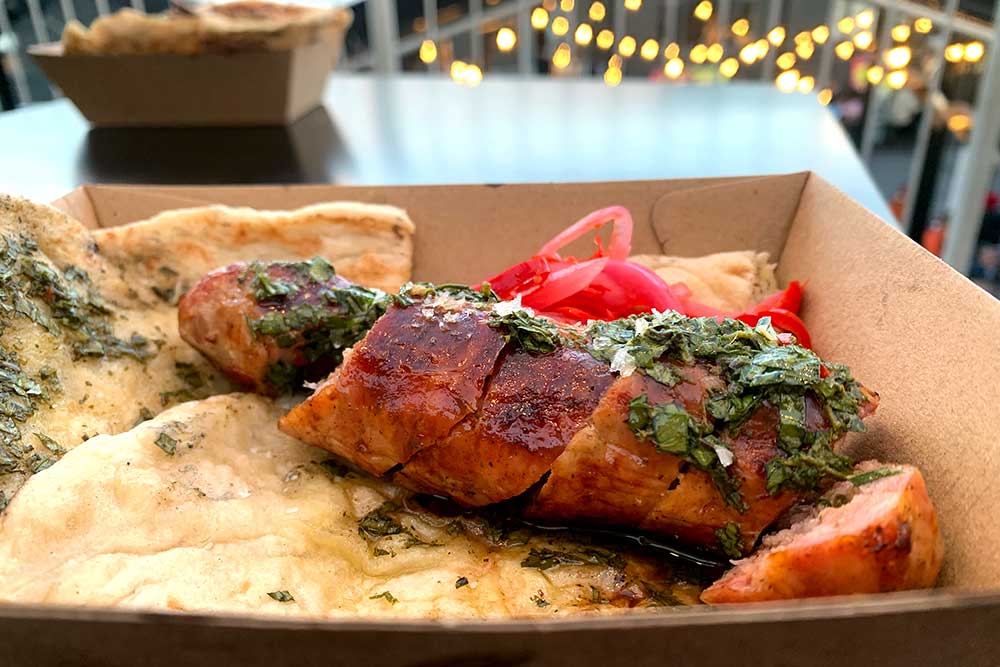 The two main dishes are served on flatbread - making them particularly good drinking food. This is the Argentinean-style sausage with chimichurri (£8)... 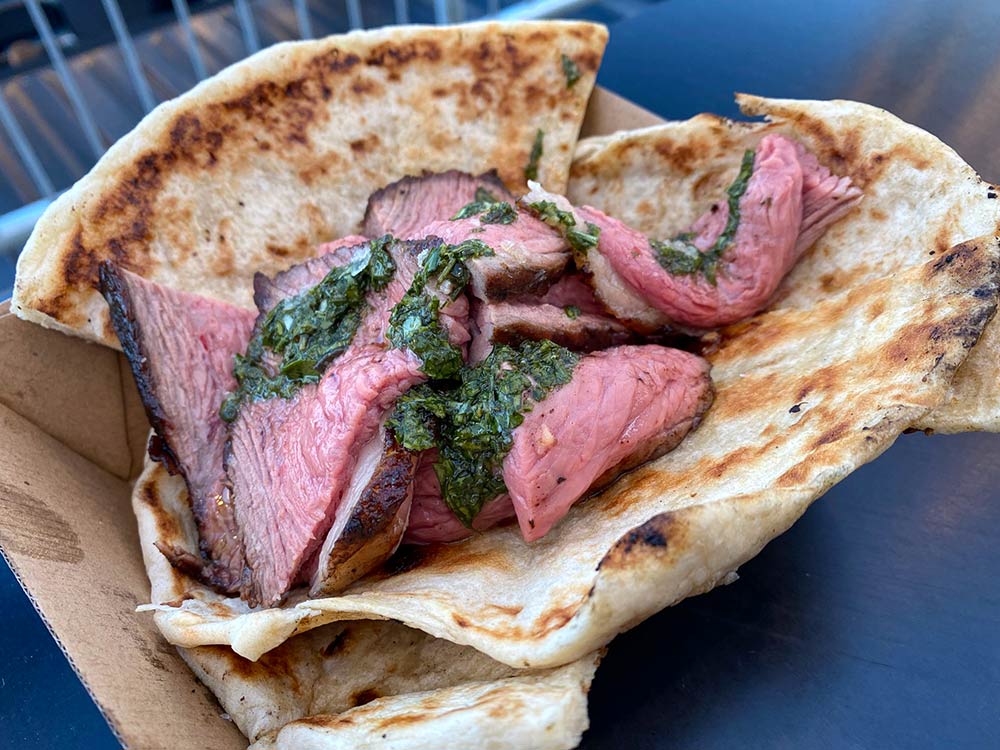 ... while this is the Aberdeen Angus picana steak with chimichurri (£14) 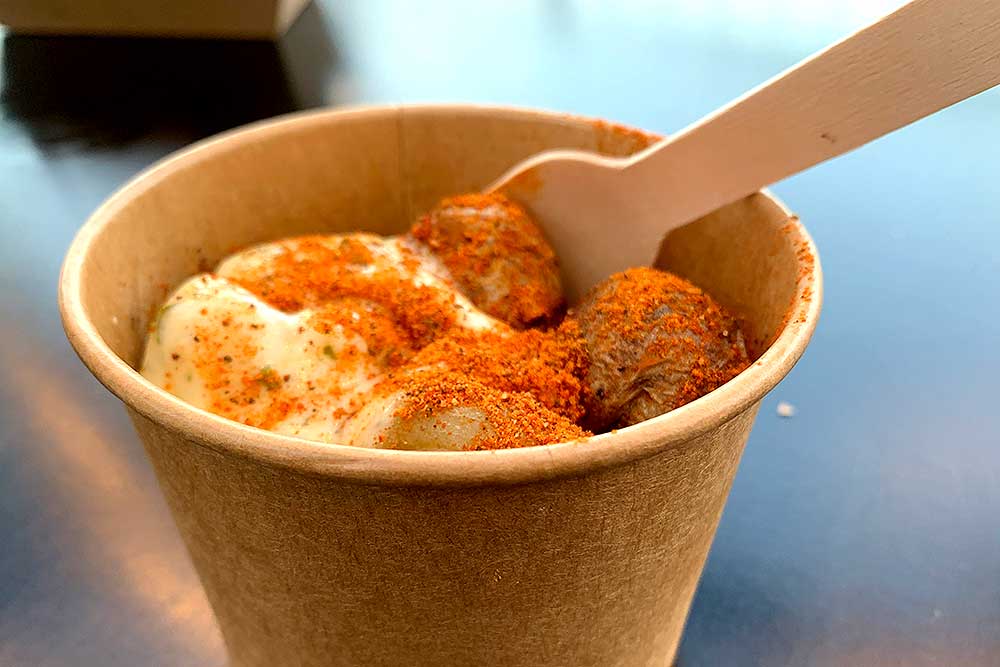 As for sides - you have these roasted potatoes and garlic mayo (£4).

Obviously, it's mainly about the beer. They have 10+ beers on tap to work your way through, with a strong focus on pale ales although you can also order their Mexican lager (Mariachi),  a gluten-free beer (Powerplant) and their own stout (Symphony) - and they do have Guinness on tap. Two Tribes also have regular specials, so keep an eye out for them. A current personal favourite is the Park Life mango juice pale ale. Prices start from £2.50 a half-pint or £5 a pint (and 2/3 servings are available).

And if we fancy something other than beer?

There's a small selection of wines, but it's very well chosen and there's even a natural wine available (a Spanish Uva de Vida). A particular recommendation is the rosé - a vins des 3 Chateaux La Stele 2109 Languedoc, which is a steal at £23 for a bottle. So if you're coming with a non-beer loving friend, they are very well catered for. 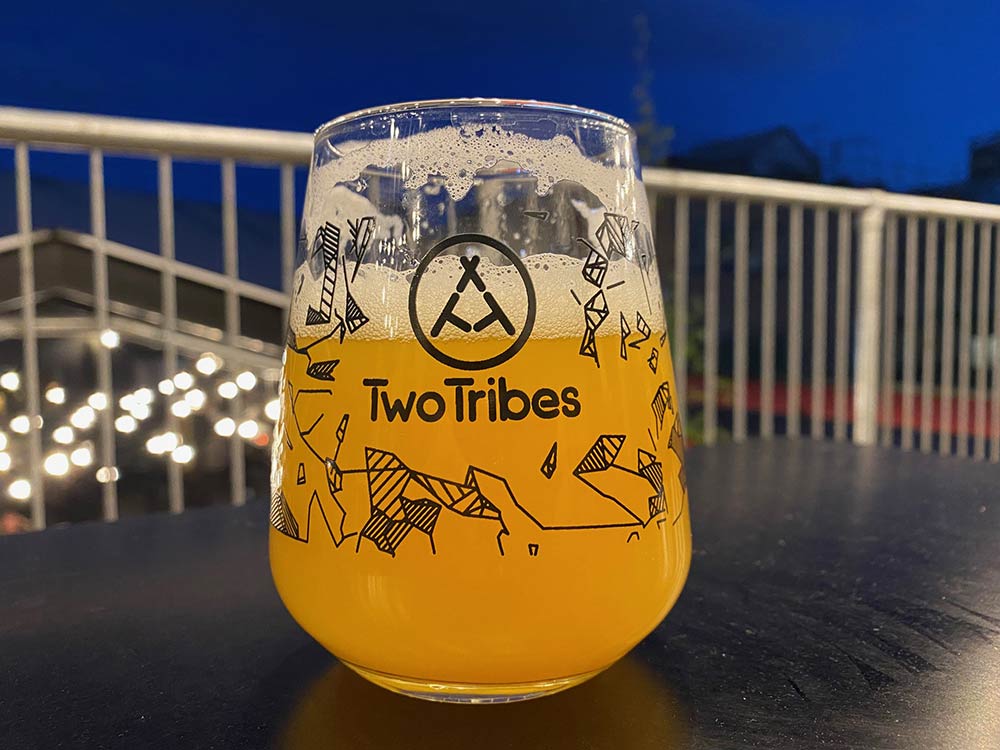 A mango juice pale ale on the balcony - just after watching the sun set.

Summing it all up

It's a bit off the beaten track but Campfire is a little hidden oasis, well worth the short trek from King's Cross. The covered seating will be perfect, rain or shine, in the months to come. The heaters also really do pack a punch on the colder nights - particularly on the balcony. It's well-priced, caters well for beer lovers but the short non-beer range is impressive too. All that and it's hosting one of London's top BBQ teams. So this place should definitely be a hit all summer long.

Where is it? Tileyard Rd, London N7 9AH

When is From The Ashes there? Every Thursday - Saturday

Hot Dinners ate as guests of Campfire. Prices are correct at the time of writing.