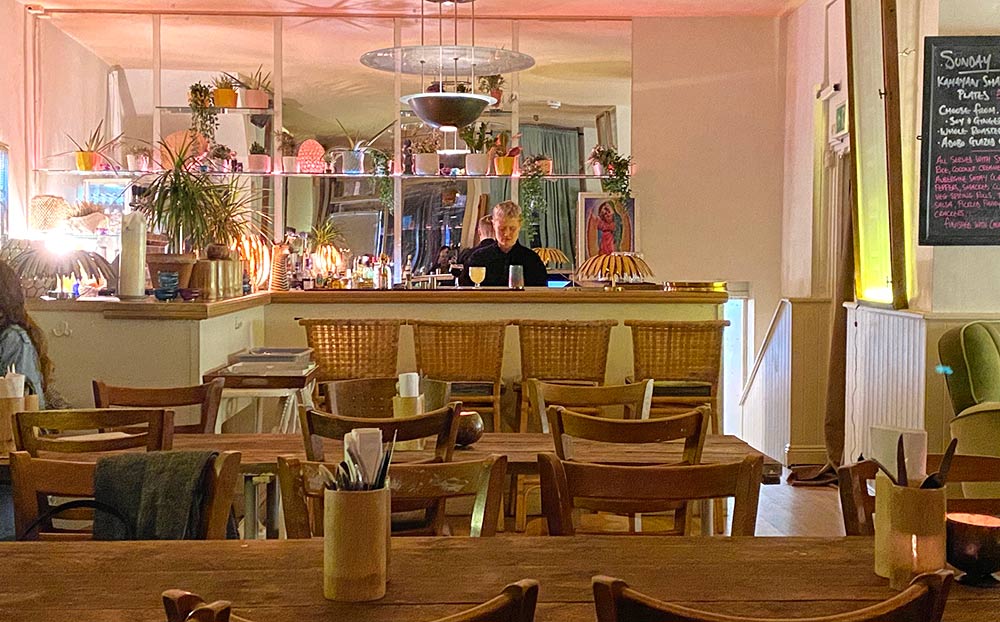 The main restaurant at Bong Bong's (and you can see a tiny bit of the lounge area to the right).

What can you tell us about Bong Bong's Manila Kanteen?

It's the first permanent restaurant from the people formerly known as BBQ Dreamz, Lee Johnson and Sinead Campbell, who also won an episode of Million Pound Menu on the BBC. This sees them serving up a Filipino menu matched with cocktails given a South Asian Twist.

It's on the eastern end of Hackney Road, just a few minutes walk from Cambridge Heath Station.

There's a hell of a lot to choose from on Hackney Road. There's wine from either Sager + Wilde or The Laughing Heart, and two excellent pubs in the shape of The Marksman and the Sebright Arms. The Queen Adelaide is right opposite the restaurant and next to that, is the cocktail bar The Natural Philosopher.

That said, Bong Bong's is also a very good option in itself - and even worth coming in just for the cocktails themselves. There's a cosy little sofa area in the middle and both the cocktails we had were excellent. The Milo White Russian (Milo, vodka, coffee liqueur, milk and cream, Maltesers - £7.50) was particularly fine in its malty goodness (with a good kick in it too). 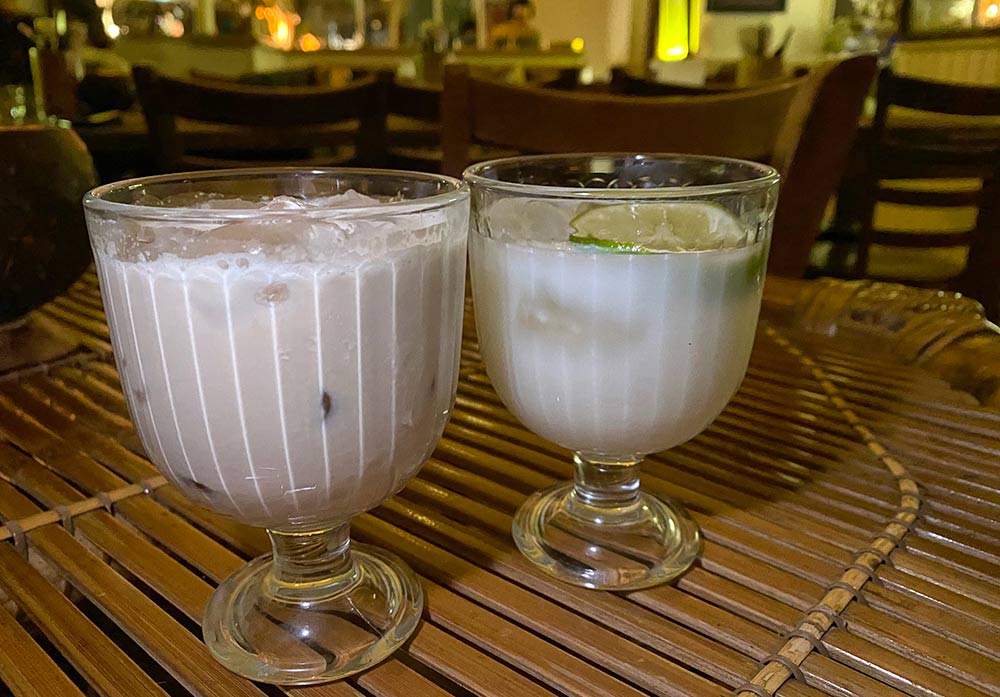 That's the amazing Milo White Russian with Maltesers on the left, alongside a Pina Colada, which we pretty much always order if we see it on a menu (both £7.50).

Nothing really struck us as the best seat in the house - but note that some of the tables are long sharing tables (see the pic above) so if you don't fancy communal dining, make that clear when booking. The table inside the window (where we set) is probably the best option for four people.

If you've tried BBQ Dreamz either while they were doing street food or in their residency at the top of John Lewis Oxford Street, you'll have an idea. Essentially, they're serving up a range of Filipino-inspired food, with a mixture of snacks, curries and more. Here's what we tried: 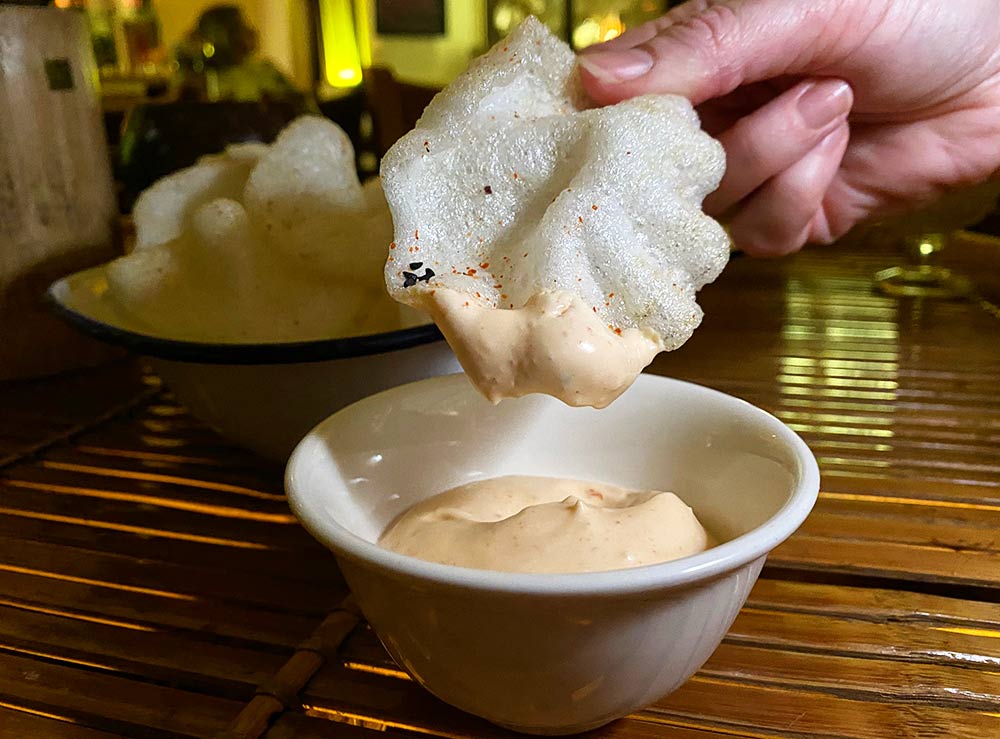 Prawn Crackers with spiced aioli (£4.50) - the first dish to order as soon as you sit down. It's a large bowl (all the portions are generous, throughout the meal) and prawn crackers and aioli turn out to be a great mix. You may also want to keep some of that aioli back for the next dish. 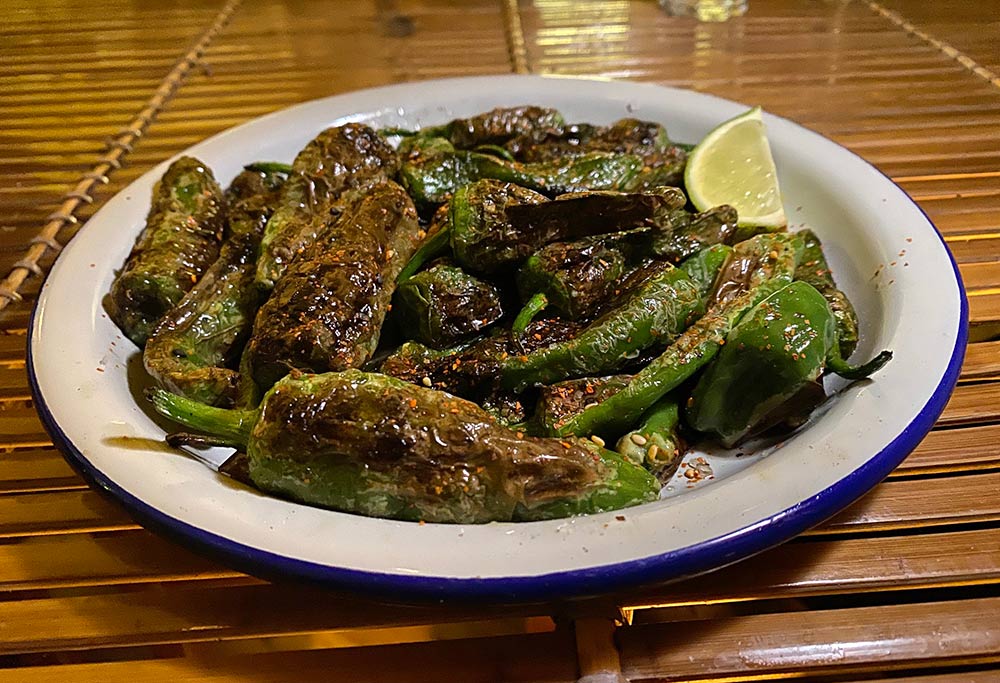 Shichimi salted Padron peppers (£5) - another to order immediately, while you're thinking about what to have from the rest of the menu. The lime is an essential addition and, as mentioned, the spiced aioli from above comes in handy here too as an extra dip. 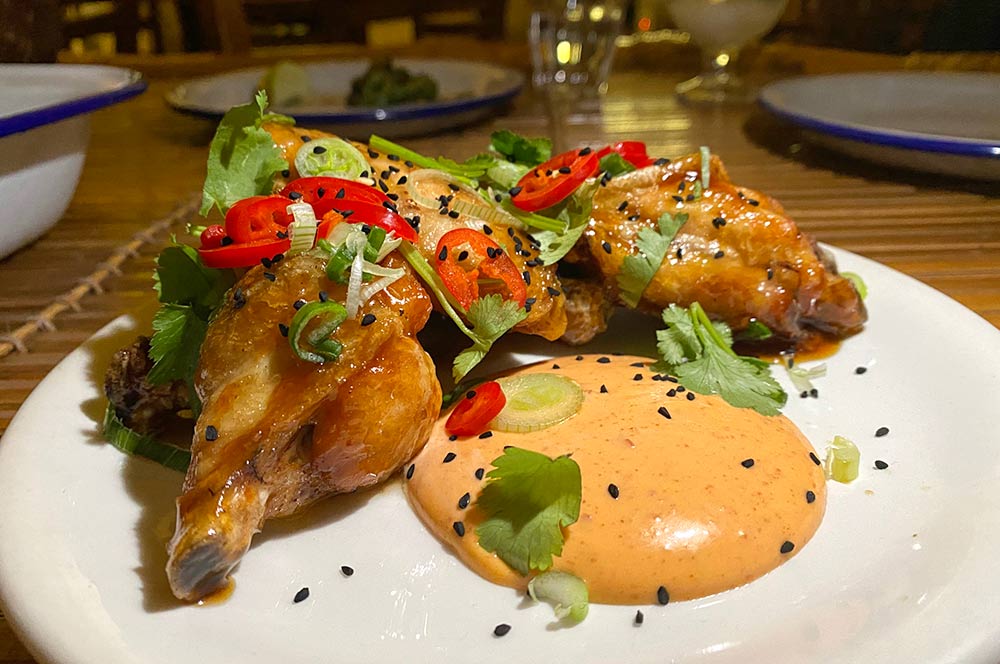 Adobo glazed chicken wings - Adobo glaze, lime aioli, nigella, sesame, spring onion and lime (£6.50) - hands down some of the very best chicken wings we've had in London (and we've had our fair share). The adobo glaze (that's traditionally a marinade of vinegar, soy sauce, garlic, and black peppercorns) combined with yet more great aioli is a proper winner. 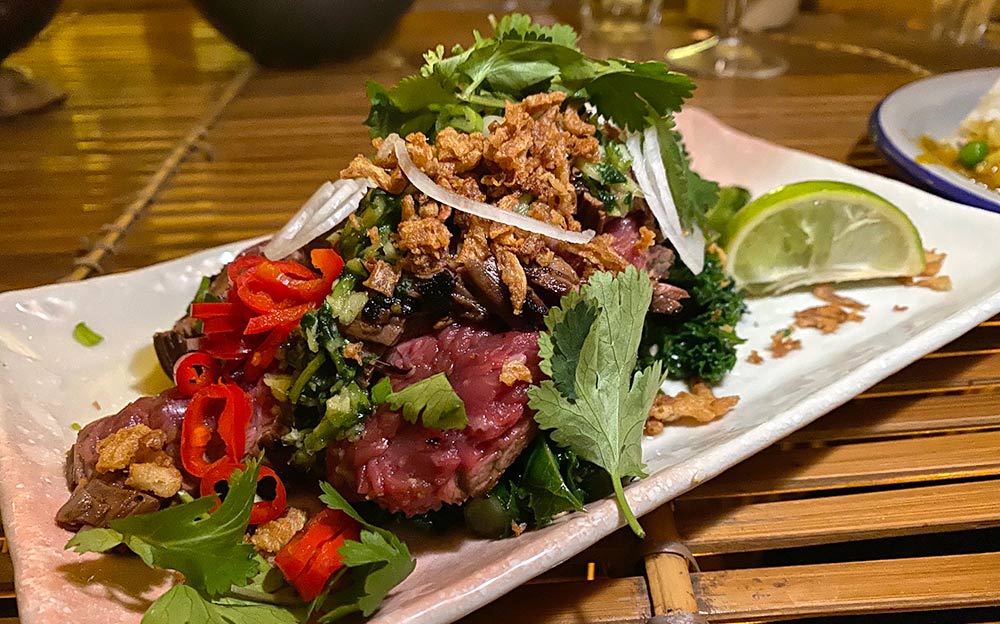 Beef tapa - Garlic cured bavette with sesame green bean salad, crispy shallots, soy, sesame & lime (£9) - hidden under here is a fair chunk of bavette with a strong taste of that cured garlic permeating through it.

And anything you missed out on?

We didn't try duck heart skewers, although we've heard good things. The one thing we really did want, but wasn't available when we visited, was the crispy pata (Whole crispy fragrant pork hock, with spiced liver sauce, sarsawan dipping sauce, and a celery, radish and coriander salad - £11). But all counts, it's pretty amazing and one of their signature dishes - here it is:

There are plenty of veg options on the menu (including the peppers above). Other dishes include Spinach and kale laing and Atchara noodle salad (Pickled papaya, ginger and daikon noodle salad with crushed peanuts). On our visit we had... 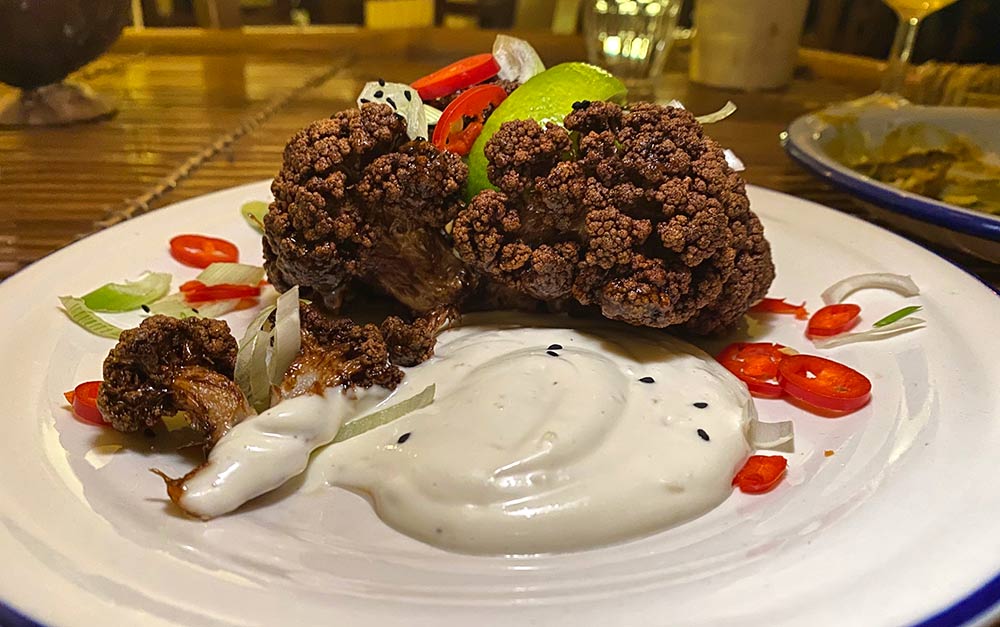 The vegetarian version of the wings - Adobo glazed cauliflower (£6.50). Frankly amazing cauliflower. If you're not specifically vegetarian, we think you should order both these AND the chicken wings above. 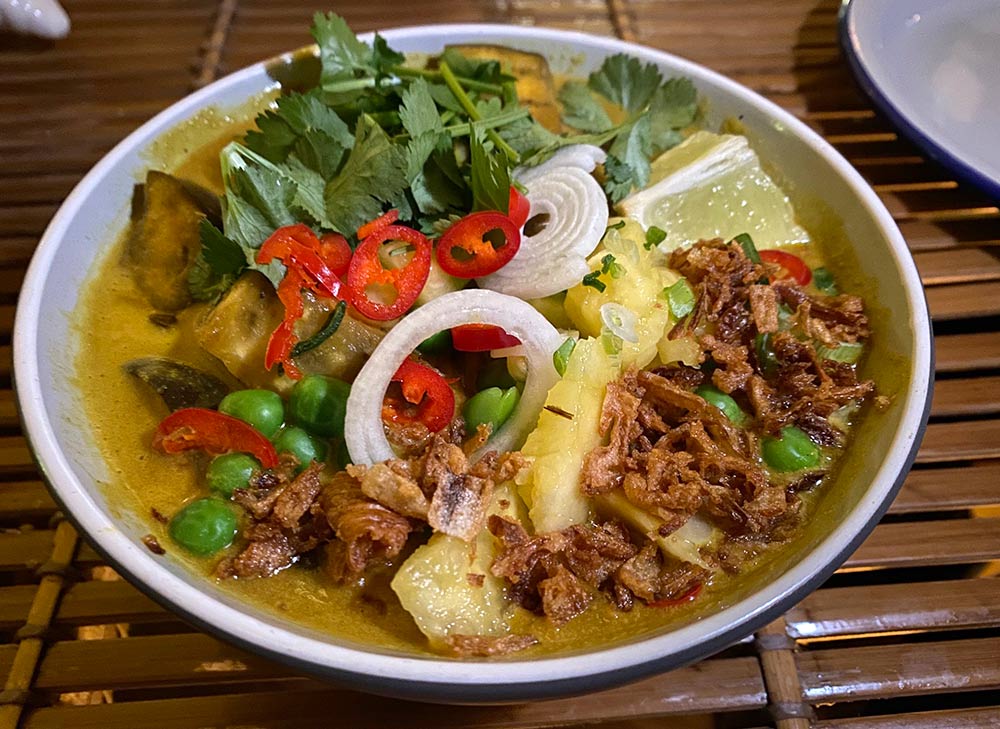 As portions are generous, you may want to consider sharing a dessert. And if so, then it's the turon below, although there's also the lighter calamansi sorbet. 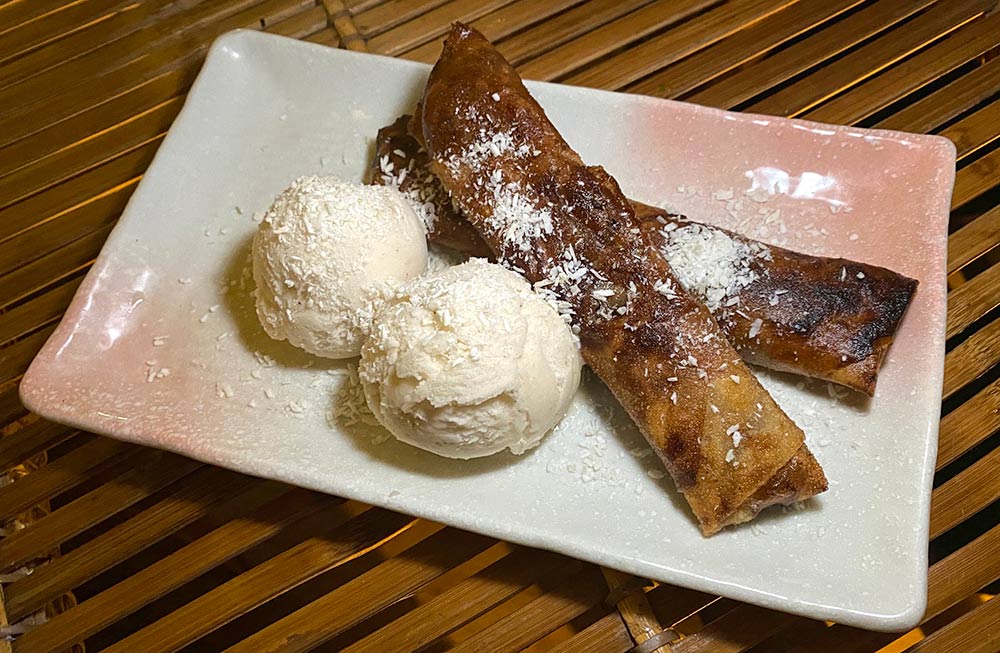 The Turon - Banana and cinnamon spring rolls with vanilla ice cream (£6). Personally, we'd have preferred this to have been sweeter than it was.

We've mentioned the cocktails already - but once again. definitely have one or two of those. For wine, they've teamed up with Uncharted Wines for a weekly changing list of two whites, two reds and a sparkling. Prices start at £5 a glass, £25 for a large carafe and we went for a French Pesquie "le Paradou" viognier on our visit.

We loved pretty much everything that we had when we visited Bong Bong's, from the snacks right through to the excellent curry. Portions are generous and there's nothing quite like it in the area. Eating here, it's easy to see why they won Million Pound Menu - good food in a lovely space and keenly priced. Well worth a visit.

Hot Dinners were invited to Bong Bong's Manila Kanteen. Prices are correct at the time of writing.