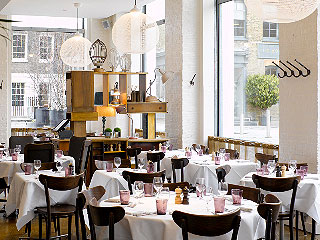 The restaurant at the Zetter Hotel in Clerkenwell has long been a good-looking venue in need of a better chef. With Bruno Loubet at the helm, finally this restaurant has the brilliant cooking to go with the space. Loubet, together with his partners at the Zetter, Mark Sainsbury and Michael Benyan, has created a restaurant with a real sense of excitement.

The night Hot Dinners was invited, mid-week for dinner, the place was mobbed (top chef Pierre Koffman was at the table beside us) and everyone seemed thrilled at their good luck of having found a London restaurant that, for once, lived up to the hype. And, let's not be coy about it, Bistrot Bruno Loubet was well-hyped, not least here on Hot Dinners.

This eponymous bistrot at the Zetter represents a new chapter in the Bordeaux-born chef’s career and it looks as though he’s taken all the lessons he’s learned from Le Manoir to L’Odeon by way of his stint in Brisbane and combined them to make the best restaurant yet.

Standout dishes on our evening there included the Mauricette snails and meatballs with royale de champignons and the deeply rich and satisfying Hare Royale. We also loved our confit of lamb shoulder – even if we thought the green harissa was one ingredient too many on the plate. Service was pitch-perfect – friendly without too much hovering and the wine choice – a Charles Melton Nine Popes 2006 Barossa was more than a match for the hare as well as being quite the nicest bottle of wine we’ve had over the past year.

This Clerkenwell opening is one of the best restaurants to hit the London scene in a good while. It’ll be hard to get a table, but persevere – this really is worth it.

To find out what all the restaurant critics thought of it and booking details, go to our Bistrot Bruno Loubet page.