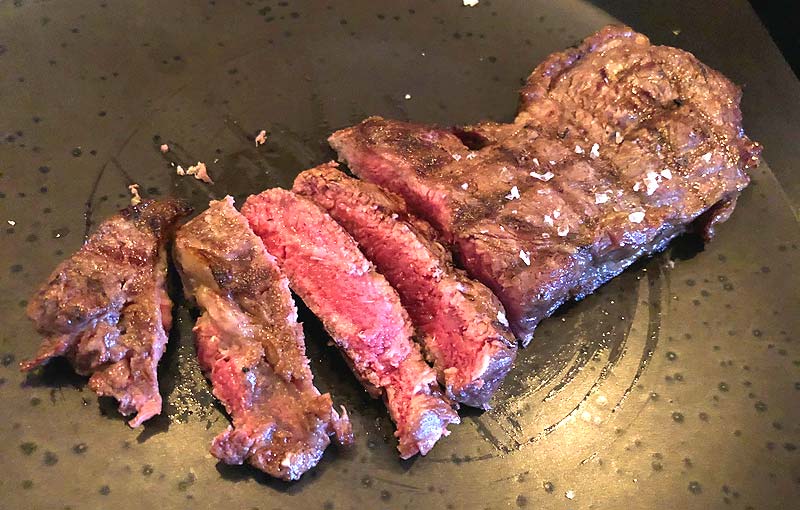 The Galician sirloin at Beef & Brew - this is a decent size for just £19.50. It's not served over medium - but that's just how you should insist on it being cooked anyway.

So what do we need to know about Beef & Brew?

This is their second restaurant. They first opened in Kentish Town in 2015 - quickly establishing a reputation, a la Flatiron, for quality cuts at budget prices - see our Test Drive of that place here. But this new place sees them going into a different gear for East London.

They've taken over the old Duke's Brew & Que space in De Beauvoir in Hackney - the nearest station is Haggerston, just a few minutes walk away. 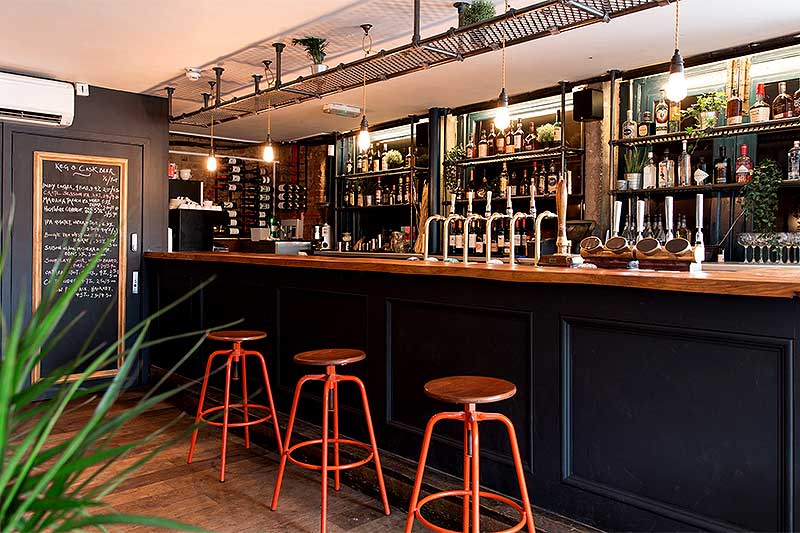 The standalone bar at Beef & Brew.

There are a few places nearby - but our new favourite is definitely Map Maison, which wasn't on our radar until we did some pre-dinner research for our Beef and Brew visit. This is an excellent bar/cocktail bar literally around the corner from the restaurant with a huge selection of premium gin and whisky alongside a very potent cocktails menu. We'll be heading back here for more cocktails and their small plates too - recommended.

And then there's also Beef and Brew itself - which has a large-ish section dedicated to drinking (as well as some handy outside tables too). Given the drink on offer here (more on that below) - propping yourself up at the bar before food would also be well worth it.

So what's it all about - steak and beer we presume?

Well yes, but the move into this much larger premises gives the team a chance to expand their repertoire. And they've also got a proper bar now, so the drinks side of things has really come into its own.

As for the steak, that's sourced from a variety of top-notch producers. Sirloin comes from retired dairy cows from Txuleta in Galicia; there are fillet cuts from Swaledale Foods’ native-breed cattle in North Yorkshire; and onglet from grass-fed Herefords. And, crucially, every steak you order is dipped in beef dripping before hitting the grill.

The main draw will probably be the £10/£15 hanger steak (200/300g) and you can read more about that in our Kentish Town Test Drive here. But we think you should veer towards the specials list - like the Galician Sirloin above and the Chateaubriand below. 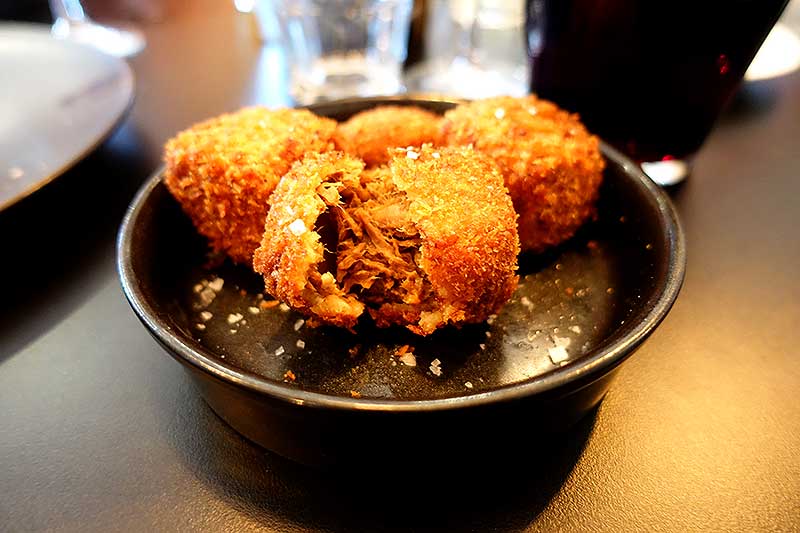 Brisket jam nuggets (£5.75) - there are a range of snacking dishes to start, but this is the one you won't want to miss out on. 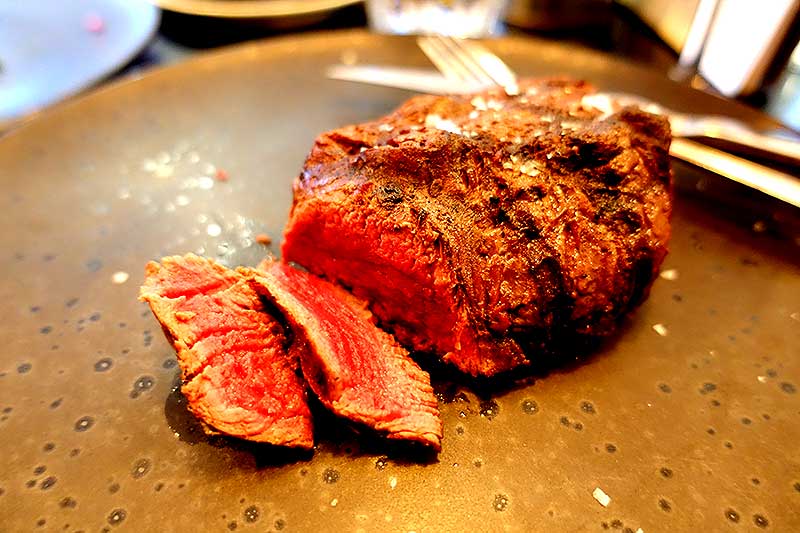 Chateaubriand's normally a sharing dish and while you can order one for two, here at Beef & Brew they'll also serve it up in a single portion at just £16.50. Make sure you get the truffled Hollandaise sauce to go with it. 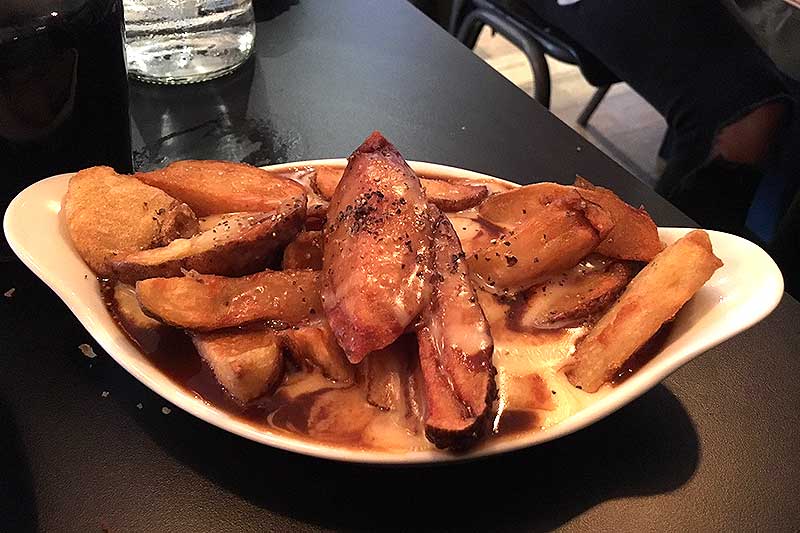 Do not miss the poutine (billed as "chips, gravy and beer cheese" here - £5.50). We can't miss poutine at the best of times, but the gravy used at Beef and Brew is pretty damned good. You may even want to dip your steak in here too...

Is it just steak? Anything for us veggies?

Actually quite a lot. They have a veggie burger (Portobello mushroom with goat's cheese, aubergine and chilli mayo (£10 - and the person on the table next to us ordered it and it looked pretty damned good). But the sides/vegetables section of the menu can be ordered like a series of small plates - so if you're coming with a non-meat eater, there's more than enough in this section. 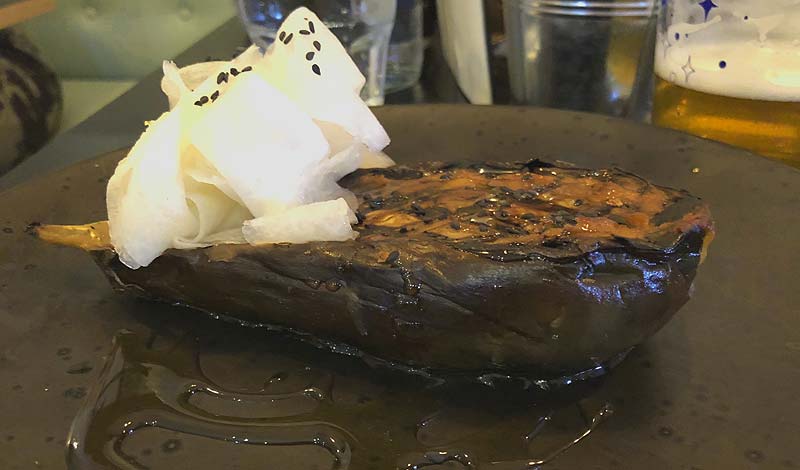 This "Smoked aubergine with honey and miso (£5.50)" was a real hit with us - and good enough to replace a steak if you're avoiding meat. 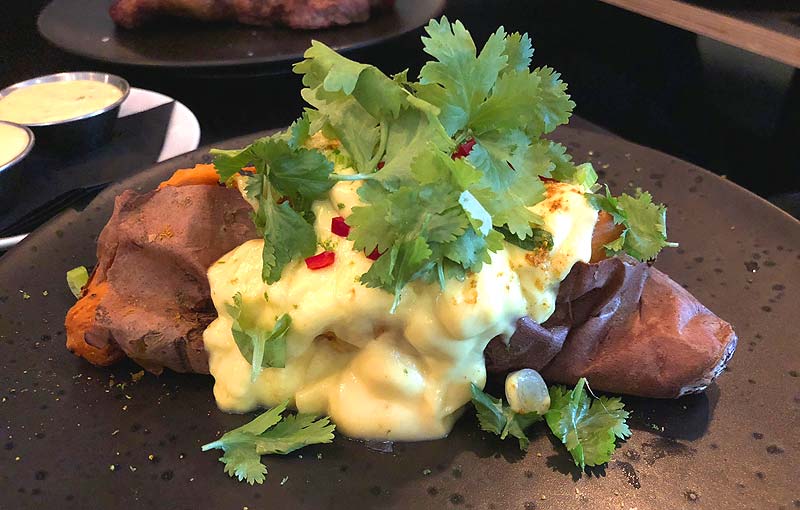 It may not look the prettiest - but this was the star of the show on the vegetable front. It's the spiced sweet potato with coconut yoghurt (£6).

Well, as the name suggests, there's a LOT of really interesting beer on the menu. Running the show here is the affable Ed Thorpe, who prior to this ran a couple of pubs in the South East of London and also was at The Slaughtered Lamb in Clerkenwell. He introduced us to the west coast pale ale Boogie Van from nearby Hackney brewery, but there are loads on the list to choose from. And it's changing all the time so we suggest roaming your way through whatever the new additions to the menu are. The beer list here makes it well worth just popping on for a pint alone (and hey, you can add some brisket jam nuggest too....).

There's also plenty on the wine front too - kicking off at a bargainous £4.74 for a glass of Spanish Pinot Bianco. We tried two from the Bodegas Castaño vineyard - £5.50 a glass - £23 a bottle - and they were delicious. But if you're looking to push the boat out there's a biodynamic Chardonnay and a Malbec in the mid £40s range.

We've been fans of Beef & Brew since we first tried their Kentish Town space, but here in East London their new space really gives them a chance to properly shine. Super steak, wonderful beer in a great setting - what's not to like?