[SIGPLUS_EXCEPTION_SOURCE] Image source is expected to be a full URL or a path relative to the image base folder specified in the back-end but /blog/2014/qgrill/gallery is neither a URL nor a relative path to an existing file or folder.
0
Shares

BBQ and more in Camden - we Test Drive Q Grill 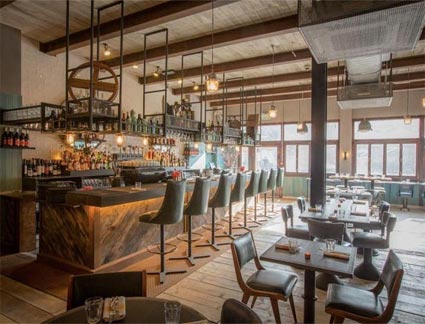 What can you tell me about Q Grill?

This is BBQ restaurant from Des McDonald, the same person behind both the Fish & Chip Shop in Islington and Holborn Dining rooms, part of the Rosewood Hotel there. Q Grill is ostensibly a BBQ restaurant, but one that offers much more beyond the usual pulled pork, brisket and ribs combo.

It's almost certain to expand across London (as the Fish and Chip shop is currently doing) and has already opened a temporary restaurant on the roof at Selfridges which will be there all summer long (and maybe beyond).

It's exactly half way between Chalk Farm and Camden Town stations - about a five minute walk from either.

Where should we meet friends beforehand?

The two best bets are closest to Chalk Farm station - Joe's Bar on the same road is loud but fun. Or if you'd like something more sophisticated Made in Camden at the Roundhouse does a good line in cocktails.

It's a big old restaurant but pretty suitable for all groups - from counter dining at the bar to some banquettes that could easily fit a group of six. These were particularly popular on the night we went so Q Grill is perfect for groups. Anywhere with a view of the kitchen is good, although there's a raised section round the back if you're publicity shy.

The barbecue trend in London continues here at Q although, as mentioned, it's less like your traditional barbecue restaurant and more like one experimenting in American food. So there's lots of varied dishes here starting with the excellent corn bread. We didn't think we'd be able to find corn bread (£2.50) that rivalled the dish we tried at Lockhart but this comes close, with a welcome spicy kick to it too. Overall. we ate a lot but this was the one dish that we couldn't let them take away until we'd devoured every bit. It's a must-order here.

Also impressive were the very messy hen wings delivered in a bag (£4 or £6.50)and we also loved the salads we had for starters. However, these are salads that are very much in the American mode - slathered with sauce and there were plenty of prawns in the shrimp cocktail (£8.75) and loads of chicken in the Hickory chicory (£7).

As for the mains - the pit smoked hash with a duck egg (£11.50) was easily the winner here. The flat iron steak and chips (£12.50) were good, but we have to admit that Flat Iron do it better - although the chips at Q Grill were excellent.

We'd also recommend leaving space for dessert - the Bulleit bourbon and pecan tart (£7.75) in particular showed that there's a lot of talent here too.

How about wine and cocktails?

Alongside the cocktail list, there are some specials and we had one of those that really deserves to go on the list full-time. It was a honeycomb Old Fashioned which was elevated above a standard Old Fashioned due to the slice of honeycomb that slowly melted in the drink. If it's on, we'd highly recommend ordering it (£8.50). We also liked the look of the tankards (julep, punch and more) for £9 each.

As for the wine, glasses start at £4.75 (125 ml) and £20 for a bottle and, of course, there is beer from the Camden Brewery on tap along with a decent selection of bottled American brews too.

Q Grill has clearly already made a name for itself in Camden given by how busy it was when we popped in. We think it offers food that's different enough from the usual BBQ offering to be well worth a look and we loved the atmosphere too that seemed to attract groups of all ages. It's an easy recommendation, but we wouldn't be surprised to see a lot more of these throughout London soon.

Prices were correct at the time of writing. Hot Dinners ate as guests of Q Grill.