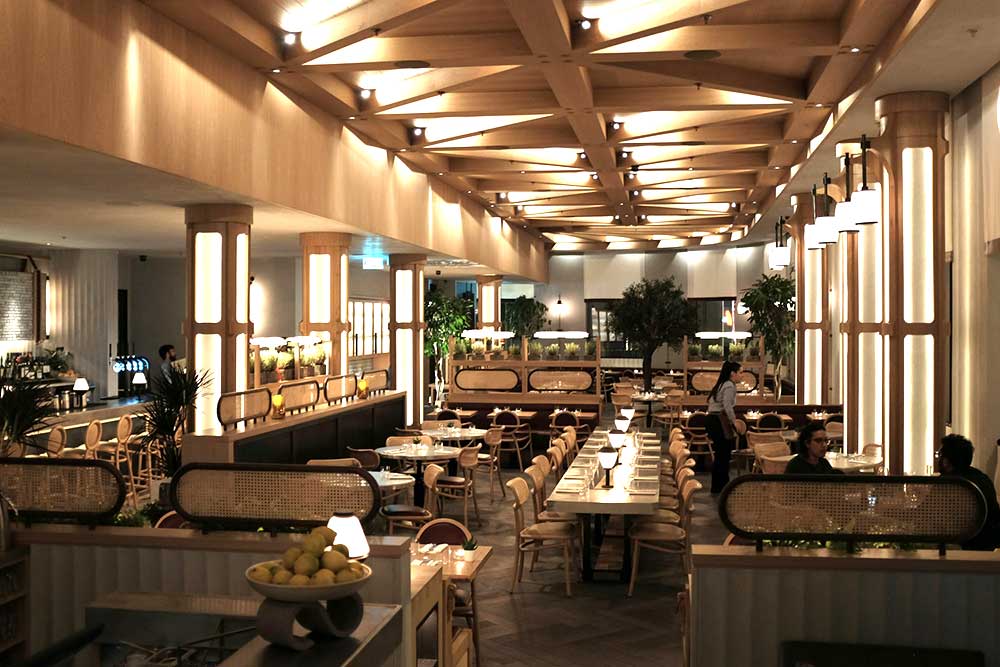 The rather glamorous dining room at Barboun

What do we need to know about Barboun?

Barboun is a classy new all-day restaurant on hip Great Eastern Street. They serve dishes inspired by the Levantine region, a cluster of coastal Middle Eastern countries that share a coastline with the Mediterranean sea including Syria and Lebanon.

It’s from the people that brought us (now closed) Yosma and Soho’s Hovarda with an Executive Chef who worked at Jamie Oliver’s ex barbeque joint Barbecoa before joining Yosma, Hus Vedat. He's still very big on cooking over open flames and has brought in Fez Ozalgan has head chef.

It's on Great Eastern Street, equidistant from Old Street and Shoreditch High Street. It’s part of a very swanky new development that includes a hotel.

If you’re after a cocktail, Old Street’s legendary Nightjar is not too far away and is hard to beat for mixed drinks. Otherwise, for pubs, you’re in the heart of Shoreditch so you’re spoiled for choice. The Owl and Pussycat is conveniently located if you’re getting the Overground, or if you’re short on time, ultra-trendy (and pricey) boozer The Old Blue Last is directly opposite.

Barboun is another restaurant that’s ditched the traditional menu layout in favour of nibbles, small plates and large plates. We ordered one from each of the three headings plus one side to share, which was plenty. Nibbles averaged around £6, small plates were around £9 while mains ranged from £19 to £28. Our vegetarian guest was pleasantly surprised, three or more choices on offer per heading.

If you do end up perched at their rather nice bar, there’s also a separate bar menu offering the likes of Rose Harissa Nuts, Scotch Egg with Merguez zhoug yoghurt, and Burnt Ends with house BBQ sauce, all priced around £5-£6.

Here’s what we had on the night: 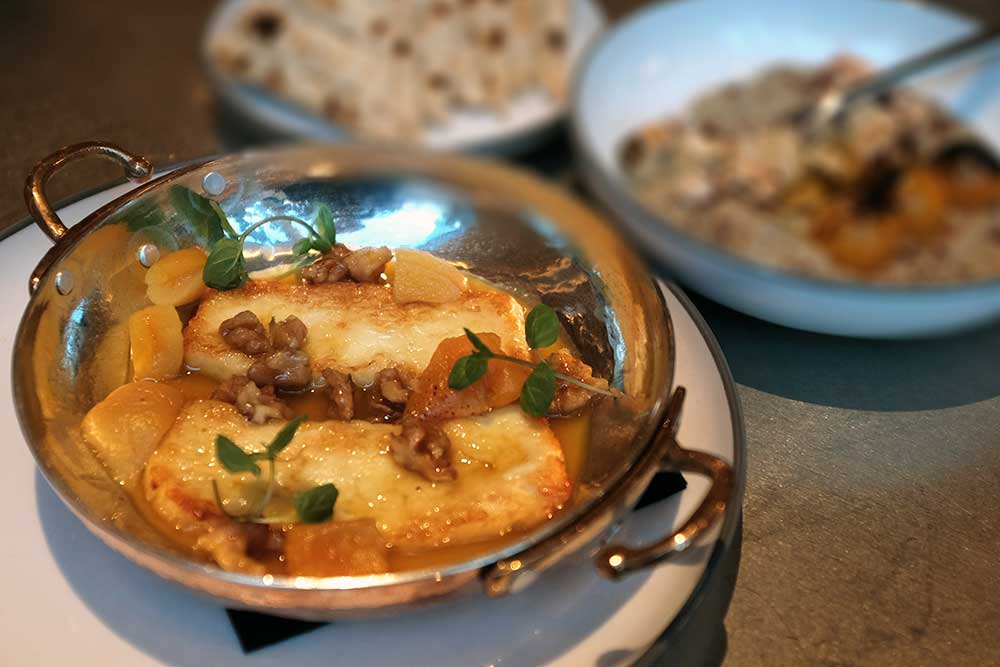 Halloumi Saganaki (saganaki means fried) from the nibbles menu, served with a drizzle of London honey and topped with walnuts and apricots. (£7) 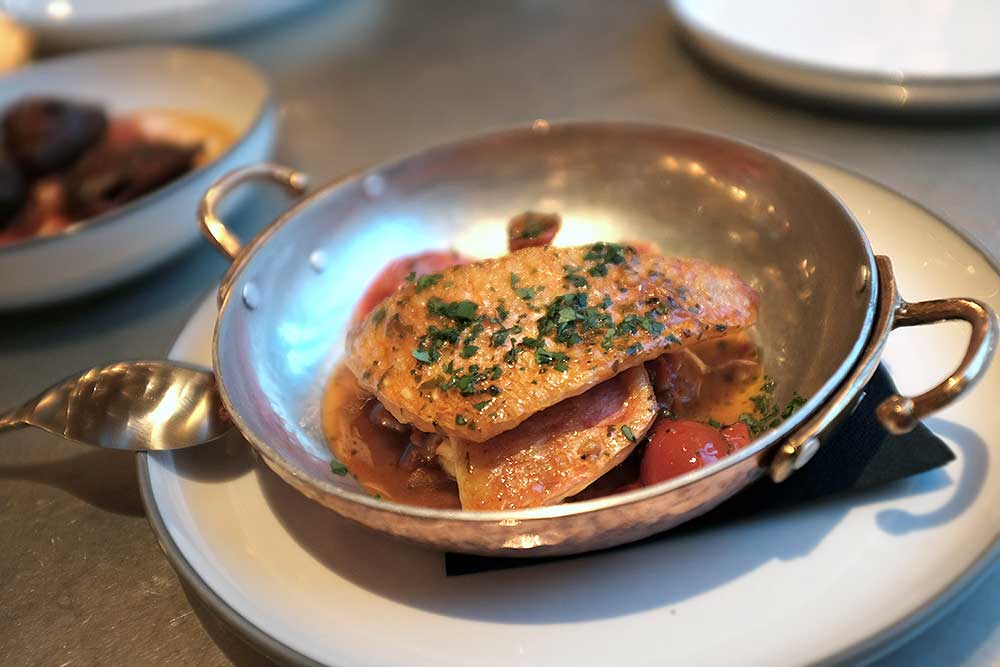 From the small plates menu, Red Mullet (which is what ‘Barboun’ translates to in English) with walnuts on chunky red pepper muhammara. (£12) 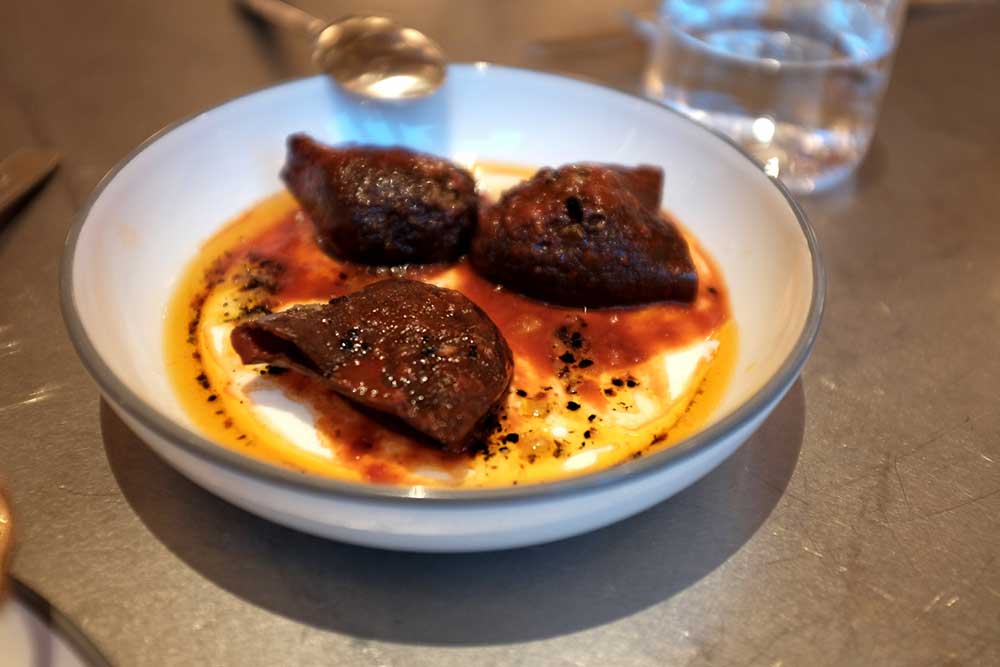 Dolma are traditionally stuffed in grapevine leaves, but Barboun makes them in these small sundried aubergines, served on a bed of garlic yoghurt with sour cherry. Not quite as beautiful, but we’d definitely order these again (£8) 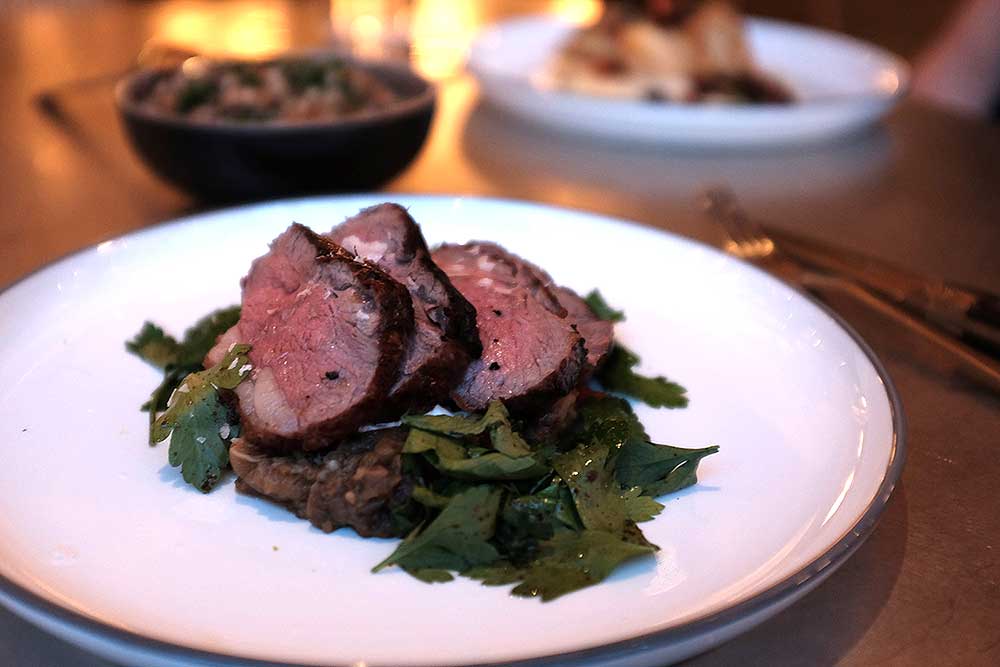 We were recommended the Lamb Rump, which was the perfect dish to showcase Fez Ozalgan's barbecue expertise. Simple, smokey, and flavoured with lemon, aubergine and tomato. (£26)

There's so much on the menu, from the snacks through to small plates and mains, that's suitable for both vegetarians and vegans - here's some of what we tried. 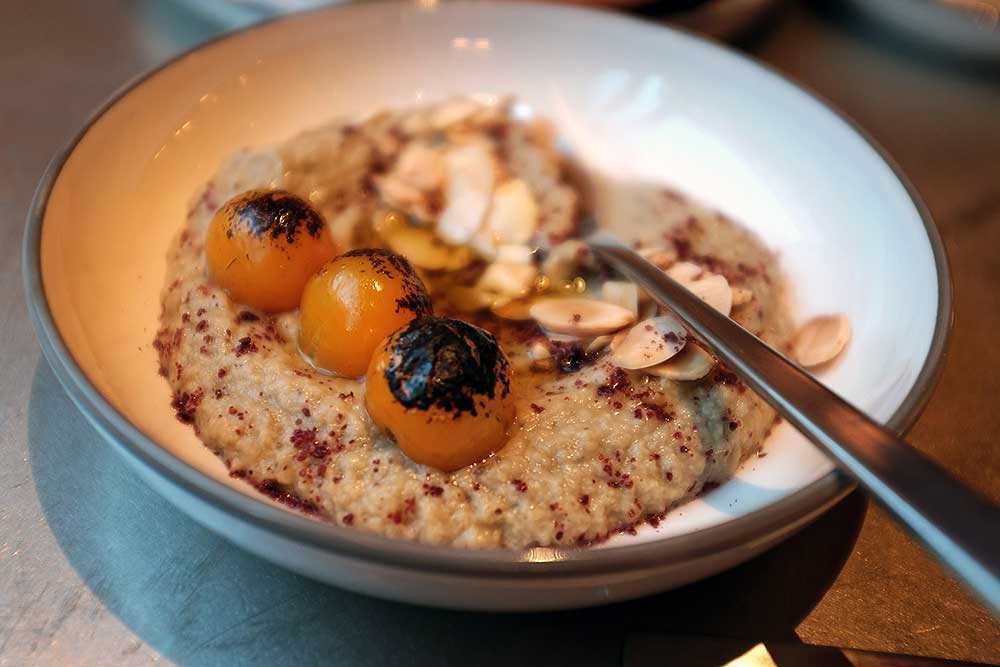 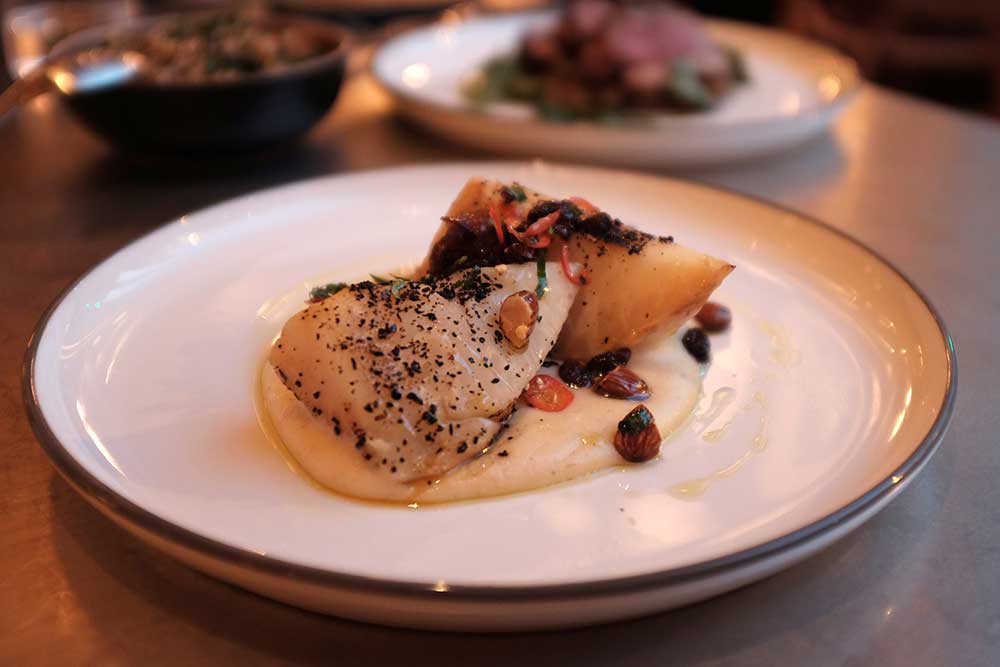 From the Big Plates section of the menu was this celeriac, a solid vegetarian main. Salted dates and Urfa chilli added depth of flavour, and it was served with hegendi — pureed aubergine with milk, butter and flour. (£15)

We make a point of never walking away from a baklava — especially when it’s served with a clotted cream ice-cream. We were also heavily tempted by the Tahini Fondant, and the Levantine-inspired selections of ice-cream flavours like mastic, spiced honey and rose. 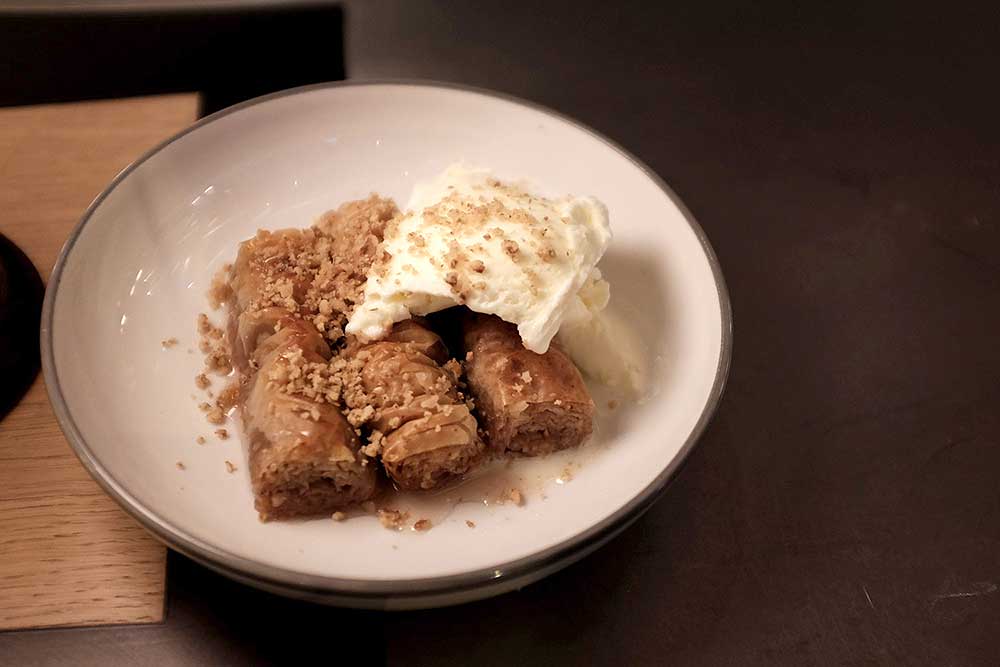 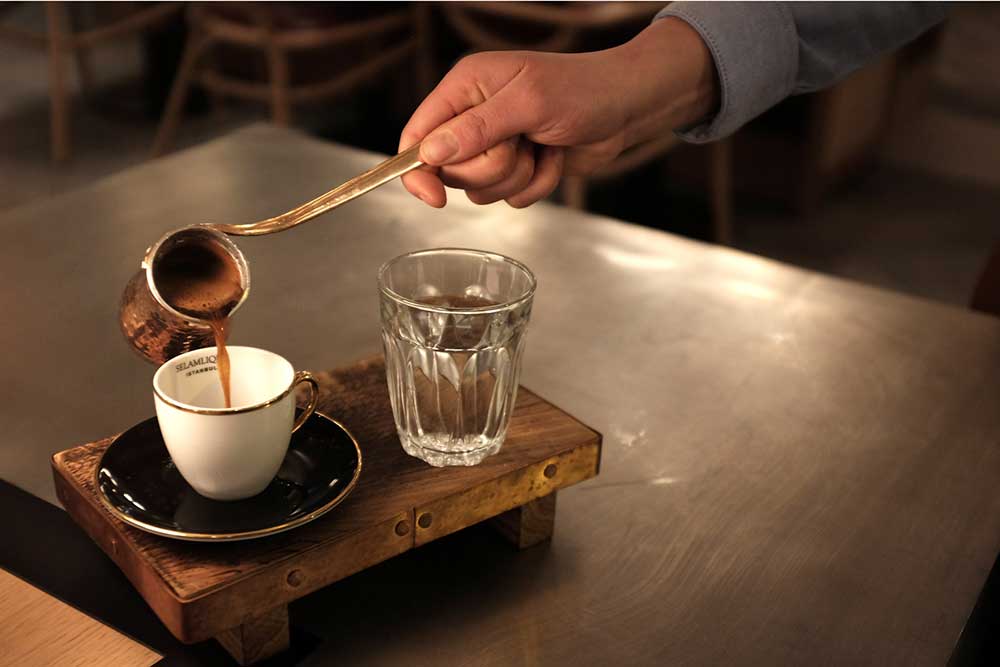 After all that, a Turkish Coffee was exactly what was needed, which is made to your preferred sweetness and poured theatrically at your table. It is quite sweet, if you prefer something more bitter then do say. (£4)

There’s an extremely decent selection of cocktails, all priced at £10, including some intriguing takes on old classics, like their Bloody Mereym, made with hot pepper-infused vodka and finished with a rim of nigella and sumac salt. The wine list is extensive and includes a couple of orange wines plus several bottles from the Levantine region. 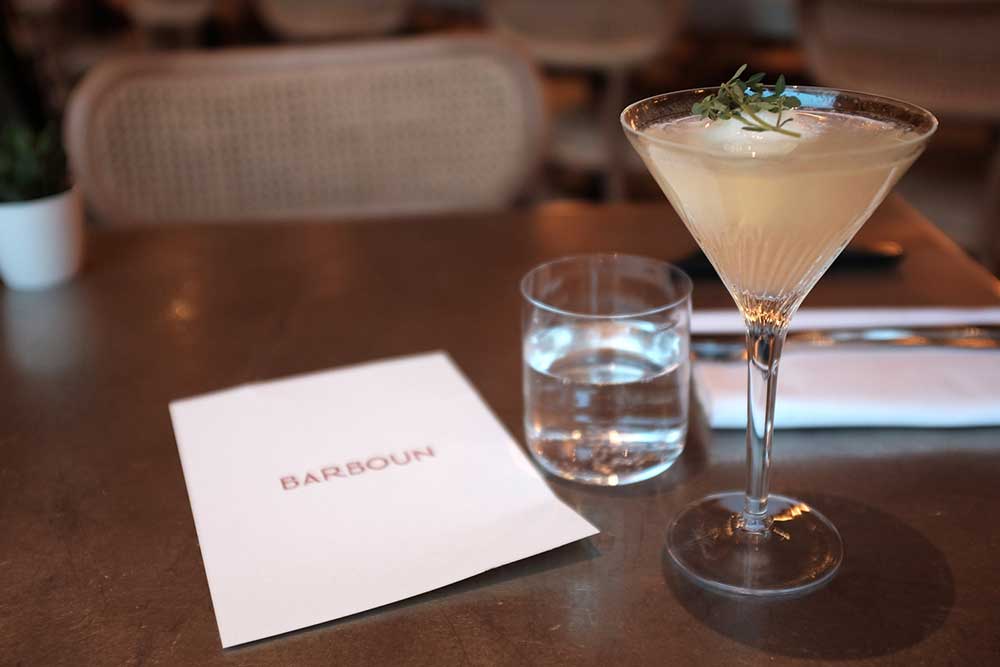 Düshesh — a gin-based cocktail with botanical flavours from cardamom bitters and lemon thyme, sweetened with a spoon of lemon sorbet. (£10)

Barboun is all about the elegance, from its gorgeous interior (don’t miss the beautiful spiral staircase on the way to the bathroom) to their dish presentation, and friendly waitstaff, all of which makes everything feel very special. It’s a good spot for a modern take on traditional Middle Eastern food and we particularly liked their cocktails.

They also do a full breakfast menu with coffee from Climpsons & Sons, so if you fancy starting your day with a za’atar croissant or shakshouka on your way to work, they’re open from 6.30am.

Hot Dinners dined as guests of Barboun. Prices are correct at time of publication

Where is it? 61-67 Great Eastern Street, Shoreditch, London EC2A 3HU

How to book? Book online.