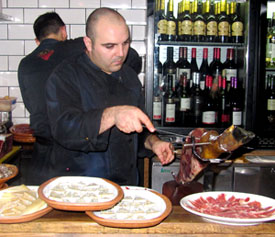 To King’s Cross recently, where the owner of Camino has extended across the courtyard at the Regent Quarter to open up an Andalusian bodega/sherry bar called Bar Pepito.

Every conceivable kind of sherry is on offer, and at the launch Gonzalez Byass’ brand manager, the fabulously-named José Argudo López de Carrizosa, had flown in from Jerez to talk us through the best of them.

Two we particularly liked were the Oloroso Seco Antique from Fernanda de Castilla and Palo Cortado ‘Apostoles’ from González Byass. On the food front, there’s fantastic pata negra – expertly carved by a man specially trained to do just that, as well as a great selection of cheeses, cured meats and assorted tapas.

Decor-wise, this hole in the wall bar looks as though it’s been here forever, with the exception of the futuristic enomatic machine in one corner, dispensing sherries via a card you get charged up at the bar. It’s bound to be an instant success, so get down here as soon as you can to secure your stool by one of the sherry barrels.