What can you tell me about Arros QD?

It's the first London restaurant from top Spanish chef Quique Dacosta, who has more than a few Michelin stars under his belt. In Spain, he has a number of restaurants, including his self-titled three Michelin-starred place which also happens to be in the World's 50 best long-list (currently at no 81). This London outpost is a new concept for him, and as you might guess from the title, rice is a central theme. That's showcased in both classic and contemporary paella dishes.

The restaurant is in Fitzrovia, about a 5-10 minute stroll from Oxford Circus station. It takes up a sizeable corner space on Eastcastle and Wells Street. 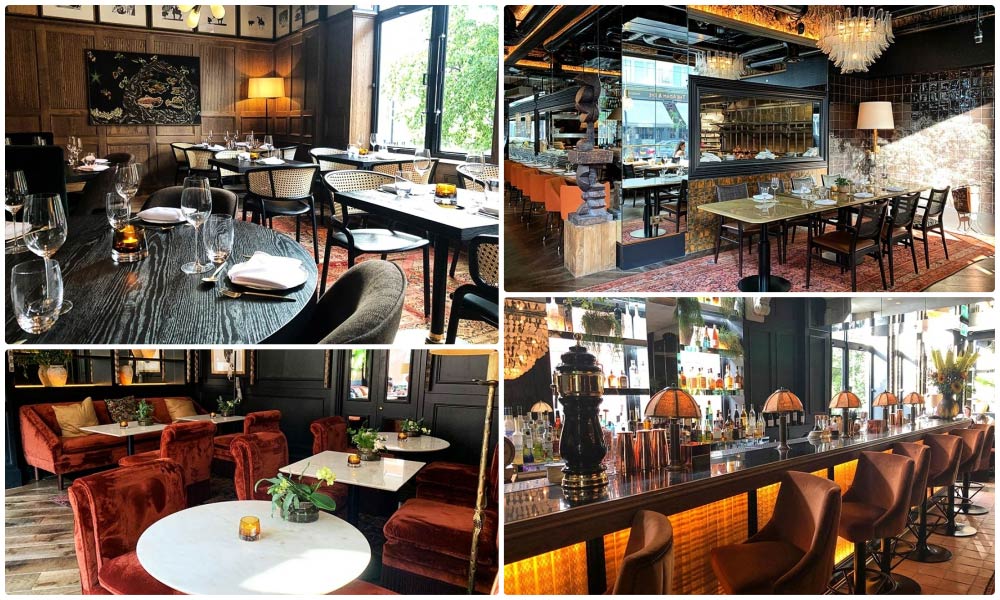 A selection of the spaces at Arros QD - clockwise from top left there's the upstairs restaurant, the chef's table overlooking the open kitchen, the bar upstairs and the lounge upstairs.

And it's an impressive space?

It is indeed - much grander than we had initially expected. The ground floor is dominated by the large open kitchen, and if you want to see how your paella is being made up-close, the counter dining seats here are the space for you. Also on the ground floor is the chef's table. It's in the main restaurant but features the best view right into the kitchen.

Upstairs it's half restaurant, half bar. There are plenty of stools if you want to grab a quick drink, but we were also rather taken by the lounge area here. This looks like a very handy place for a relaxed drink, even if you're not in the mood for paella - very useful if you work nearby.

If we're not heading to the bar - where's a good place for a nearby drink?

There are a couple of pubs nearby - The Champion is a good option - or alternatively, the Punch Room at Berners Tavern is just around the corner. But really, the bar here may be the best bet.

Onto the food - it's all about the paella, yes?

It's certainly the main event, but there's a lot on the menu that you'll want to try before you get to the paella. You'll want to start with a selection of dishes from the small (i.e. snacks), starters and skewers sections. There are some very compelling dishes on offer - (the fried soft-shell crab was tempting) - but here's what we went for to kick things off... 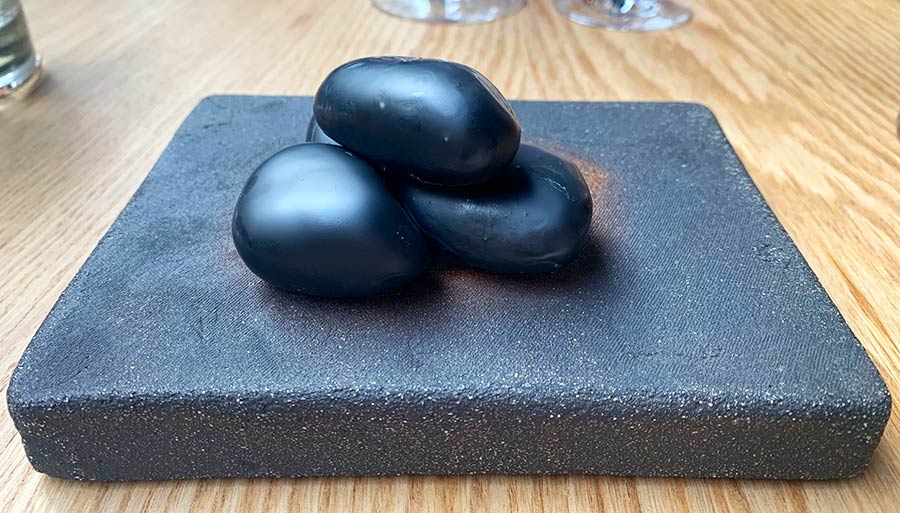 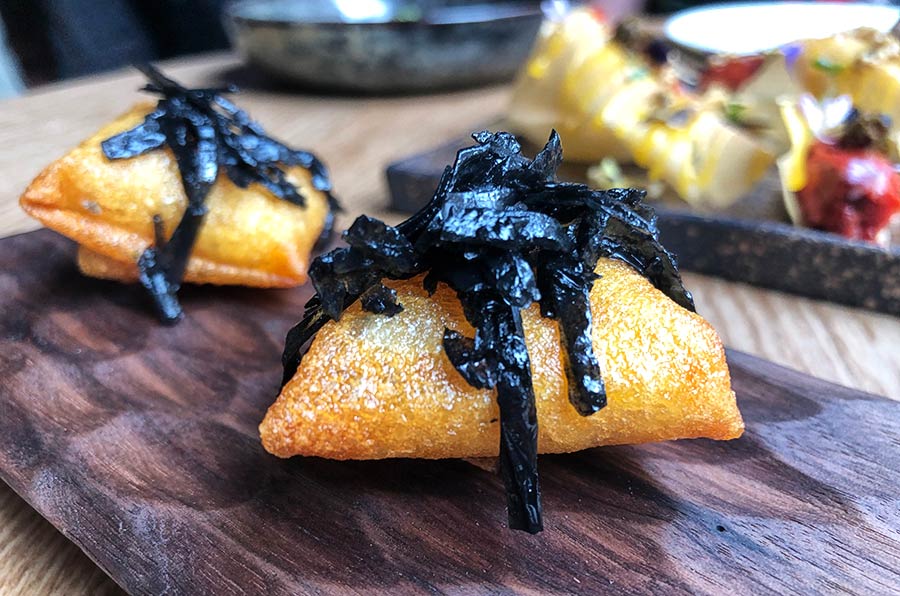 Truffle bomb, ‘liquid’ potato soufflé, truffle ‘spaghetti’ (£9.50) - eat it all in one go so it explodes in the mouth. 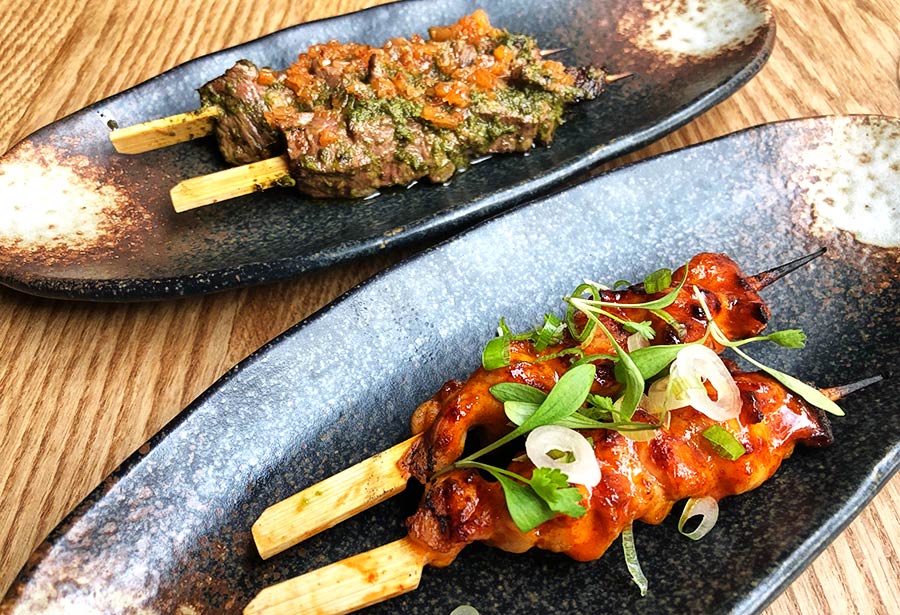 Skewers - at the back there's Iberian pork, ‘mojo verde’ sauce (£7 each) and at the front are Chicken, kimchi sauce (£4.50). The chicken was the definite winner. 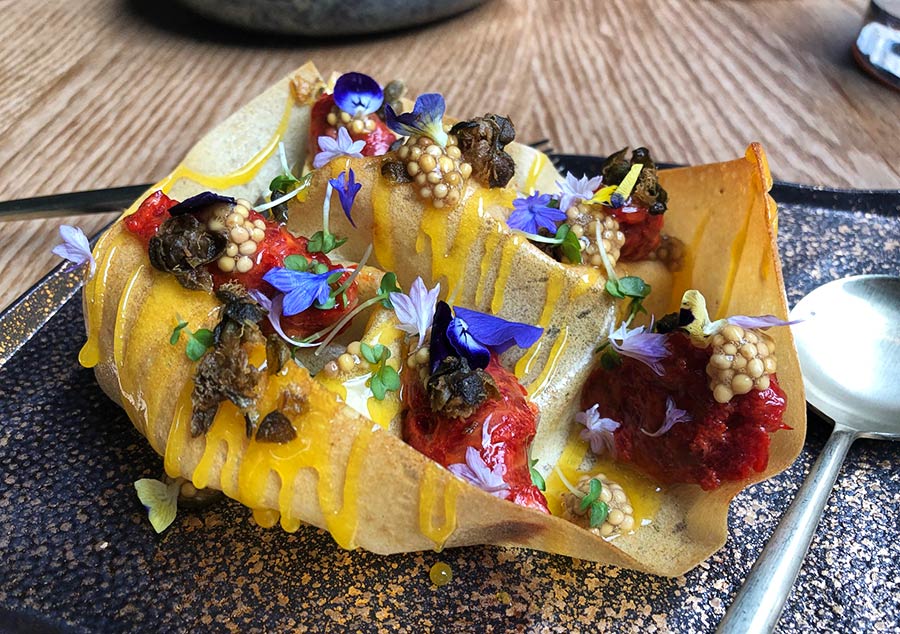 Crispy beef tartar, cured egg yolk, capers, mustard seeds (£18) - a very unique take on tartare, where you break up the potato crisps. Either smash or carefully break into sharable sections which are easy to pick up and eat (we went for the latter). 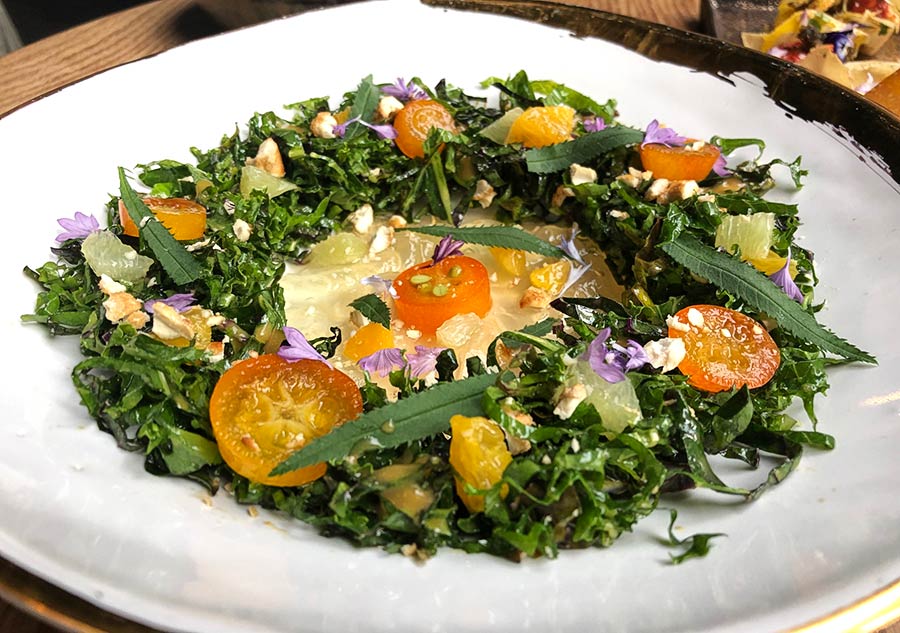 Kale citrus salad, mixed Valencian citruses, three tomatoes dressing, cashew nuts (£14) - we didn't actually go for this originally but were advised to order it. We're not normally kale fans (unless it's in colcannon) but this was a hit with us.Frankly, anyone who can make kale delicious is doing something right in our book.

Then onto the paella?

If that's what you fancy, yes. But it's not all about the rice. There's also a whole grill section to sate any non-paella fanciers. Choose either from the wood or charcoal section, with extreme options like a "Grass‑fed Cornwall tomahawk, 40 days aged" at £110 (suggested for 2-4 people). There's also lobster with chili crab dressing, whole brill, marinated Scottish skate wing and more.

And now it's time for paella?

Yes - and you''ll need to keep your appetite for this (although everything we had up to this point was fairly light). They've clearly gone to a lot of trouble to get their traditional paellas just right. The open kitchen downstairs is focused on them, and they've spared no expense on the kitchen equipment... 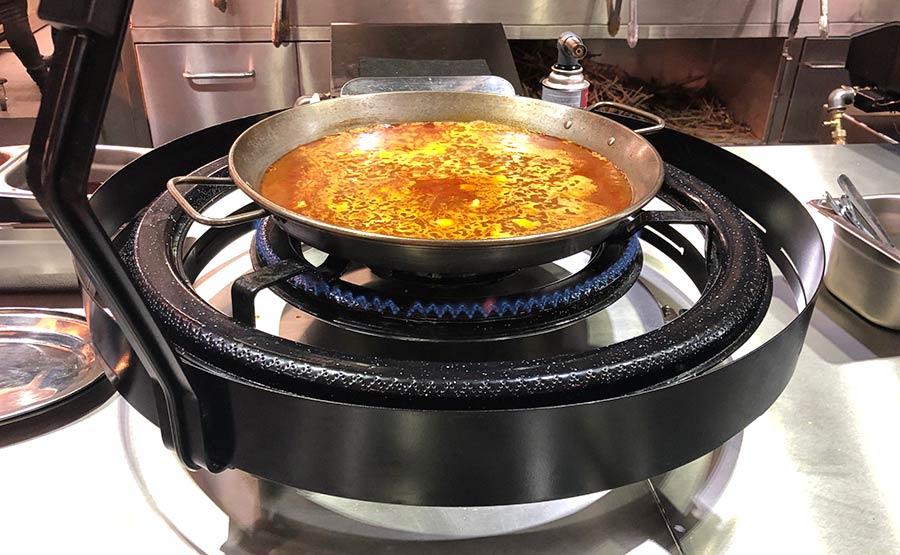 This is the computer controlled hob that's used to prepare the paella. No, you can't afford one for your own kitchen.

So there's a choice of paella types?

Yes - you're looking at "traditional rice" or "contemporary rice". And if it's your first visit, we think that you'll definitely want to take in one of the traditional types (it's what the tasting menu focuses around too). Each one is served in a traditional paella pan and can easily feed 2-3 people. We've heard talk that it could serve four - although we think that's stretching it. But we do tend to the greedy side of portion control.

We think that the main dish is the one that we chose... 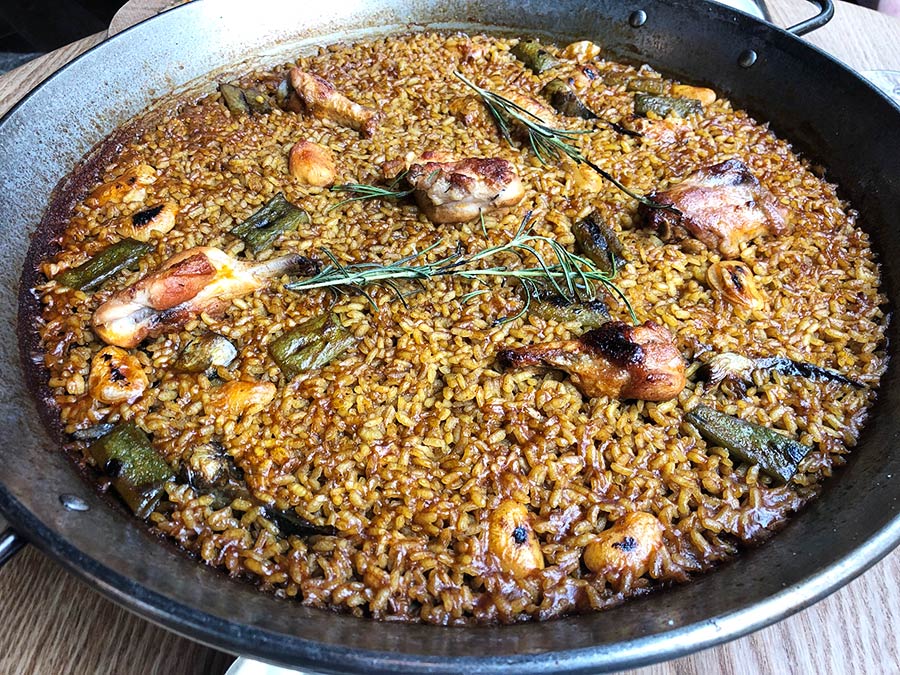 This is the Valencian Paella - it's rabbit, chicken, garrafo bean, rosemary and traditional aioli (£38). It has that crispy rice base that anyone eating paella craves and the aioli was damned good too. A top paella - almost certainly the best in town at this point.

And how about the contemporary rice dishes?

These veer away from traditional paella. They're served in square pans, and can be ordered in small or large portions if you fancy getting a selection. Examples are "Smoke ‘dashi’ eel, katsuobushi, white sesame seeds, black garlic aioli (£17/£32)" or "Wood pigeon breast, wild mushrooms, rosemary, porcini aioli (£18/£34)"

Here's how they look:

There are sides as well?

There are - but if you've ordered the paella, we really don't think you'll need any extras. We had "the grilled cauliflower" but it was a bit too heavy on the tahini for us - and you can even order roast potatoes. The sides are really only for people ordering from the grills. That said - there are six types of aioli if you fancy giving those a go, including black garlic aioli and oyster aioli.

We tried the couple that you can see below - and think you should definitely go for the cookie (it's the most theatrical). Otherwise, we were rather tempted by "Pineapple, coconut ice cream, rum syrup" or "Pistachio, cocoa craquer, pistachio sponge". All the desserts are £11. 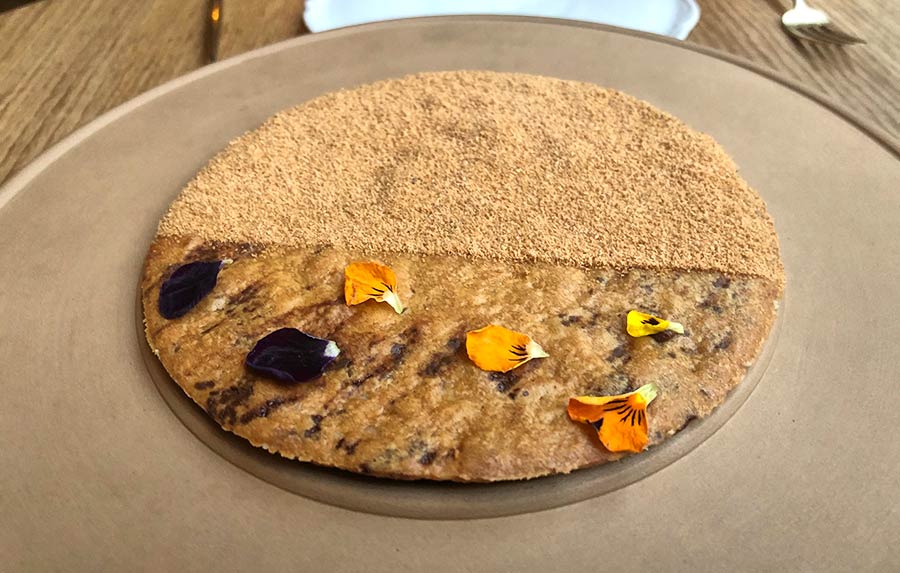 Giant cookie, macadamia nuts, araguani chocolate, vanilla ice cream - the ice cream and chocolate is in the bowl below - smash the cookie to get to them. 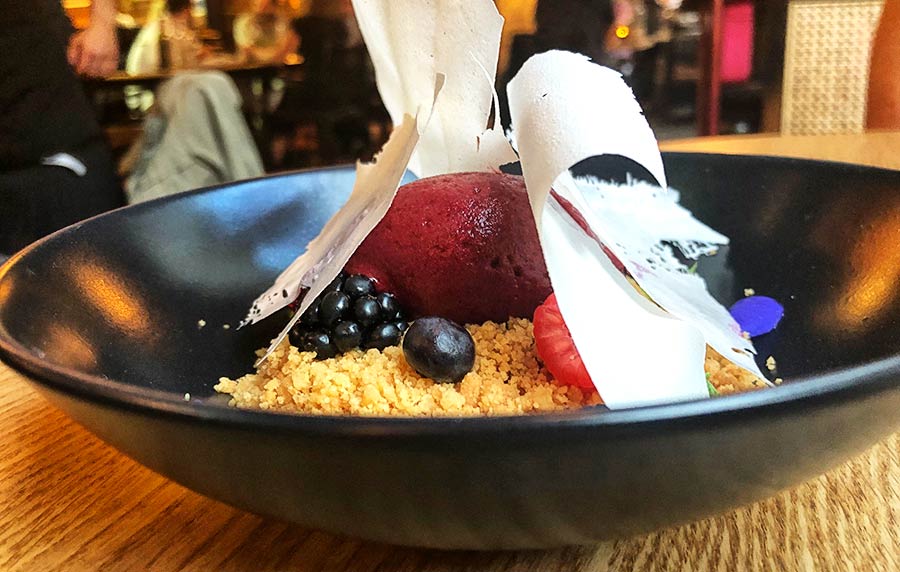 As for wine, glasses start at £9 (175ml) or £30 a bottle and there are a few more choices at £35, so that's not a bad selection down the bottom end. Otherwise, you'll see a large wine list split by region, with options for large-format wines (i.e. huge bottles) and a section devoted to sherry too.

This is a restaurant that's been three years in the making and when you head in the door, it's clear that they're taking things seriously here. Their paella is certainly on point - and that's the main thing to get right here. Combine that with plenty great starters and snacks, a beautiful looking restaurant (with plenty of light in its corner setting), welcoming staff and a buzzy atmosphere throughout - and they're absolutely onto a winner.

Hot Dinners ate as guests of Arros QD. Prices are correct at the time of writing.

Where is it? 64 Eastcastle Street, London W1W 8NQ