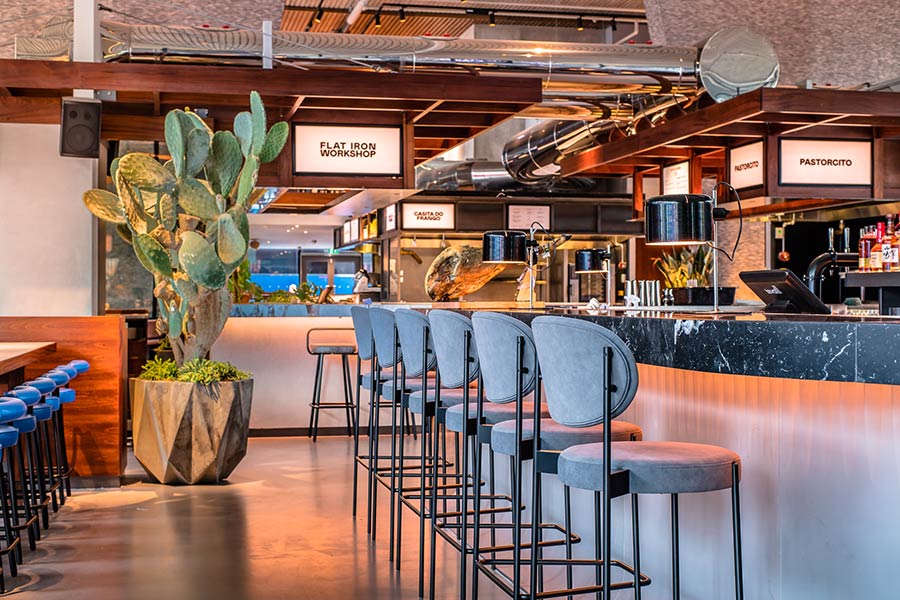 This is the main ground floor area at Arcade Food Theatre. It's where you'll find most of the restaurants, as well as the main bar.

What can you tell us about Arcade Food Theatre?

Put simply, it's a next-level food court that's opened at the base of Centre Point. But it's the quality of the people involved that has garnered Arcade most of the attention. With people like Oklava, Pophams, Flat Iron, TA TA Eatery and more involved, it's very much the classy operation. All of those will be at Arcade Food Theatre for at least a year.

It's in a new purpose-built section that's part of the ongoing work to completely regenerate the Center Point area (in line with the Crossrail works). Head out of Tottenham Court Road at the New Oxford Street exit and you'll see it just ahead of you. It's very handy if you've been shopping on Oxford Street. 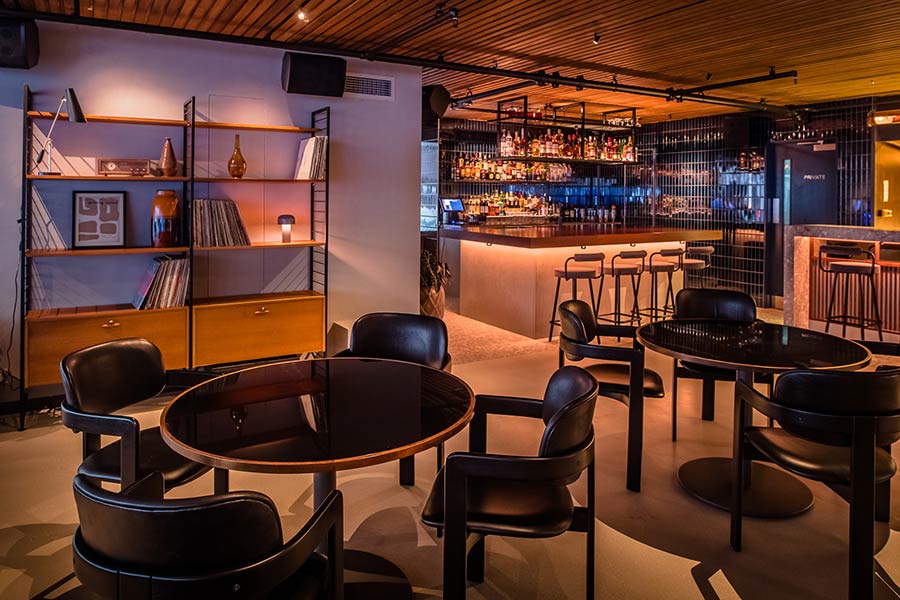 Tou has this upstairs mezzanine section all to itself, plus there's a mini bar area up here as well.

How does it work?

All the restaurants have their own mini kitchen space and also have a small amount of counter seating in front. So you can either sit up at a specific counter, or order your food at the till before finding a space to sit elsewhere - there are plenty of other places to sit throughout the building. The exception to that rule is Tou from TA TA Eatery - that also has its own lounge section on the mezzanine at the back of Arcade Food Theatre.

Once you've ordered, If your food will take a short while to prepare and you're not sitting at the counter, they'll generally take your number and text you when it's ready to be picked up.

And if I fancy a drink?

There's a central bar space where you can get drinks. If you're sitting up at one of the counters, we'd suggest getting a drink there first and taking it to the counter of your choice. That's because the restaurants don't serve drinks (with the exception of Pophams).

What can we expect from each of the restaurants involved?

Each features a selection of some of their best known dishes as well as some exclusive dishes only available at this place. Here's a breakdown of what each of them have to offer. 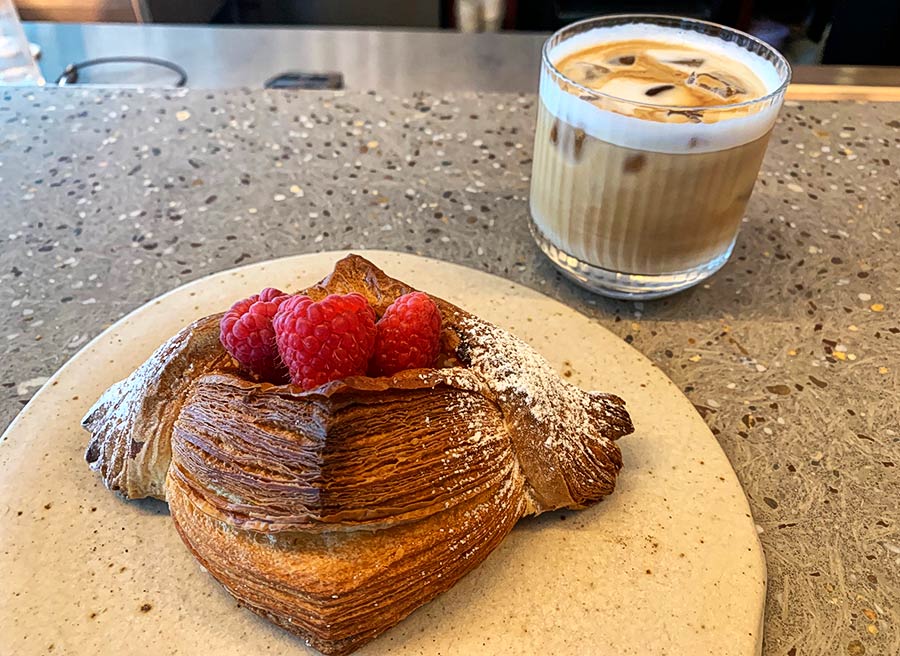 The exclusive pastry for Pophams - this is the coconut custard and raspberry pastry - their iced coffees are super as well.

On the menu: A selection of their croissants - the famed maple bacon, rosemary and sea salt twist, seasonal nectarine and ginger custard danish and more (most ranging between £3 - £4). They also have lots of coffee and soft drink options.

This is probably the place to start your day, as they open first thing in the morning. Here you can grab what we can attest to being a very good cup of coffee as well as some of the pastries they're best known for. So if you've yet to try their maple bacon croissant, then now's the time. It's all available to takeaway - so well worth popping in first thing if you work nearby. 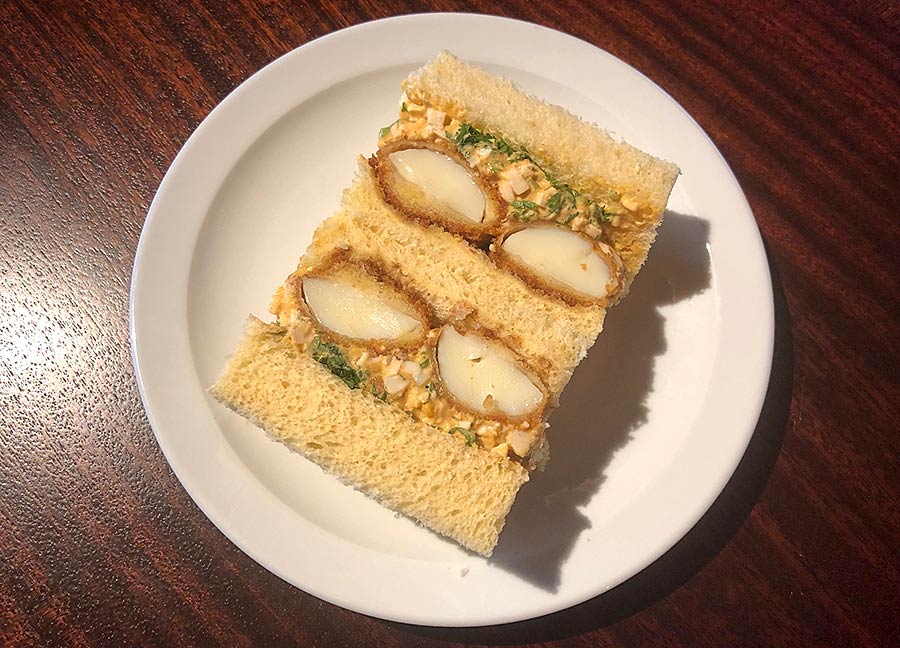 What: Sandos from the best in the business

While sandos have been growing in popularity in London of late, there's one sando which is (rightly) revered as the very best - and that's the Ta Ta Eatery Iberian Katsu Sando. It's one of London's best dishes, let alone best sando and you have to try it at least once. But once you have, you'll be coming back for many more. This latest operation from Ta Ta is ALL about sandos, adding a couple of new creations to the mix. They're also the only restaurant here at Arcade to have their own little lounge area - head up the stairs, which is where you'll find Tou. 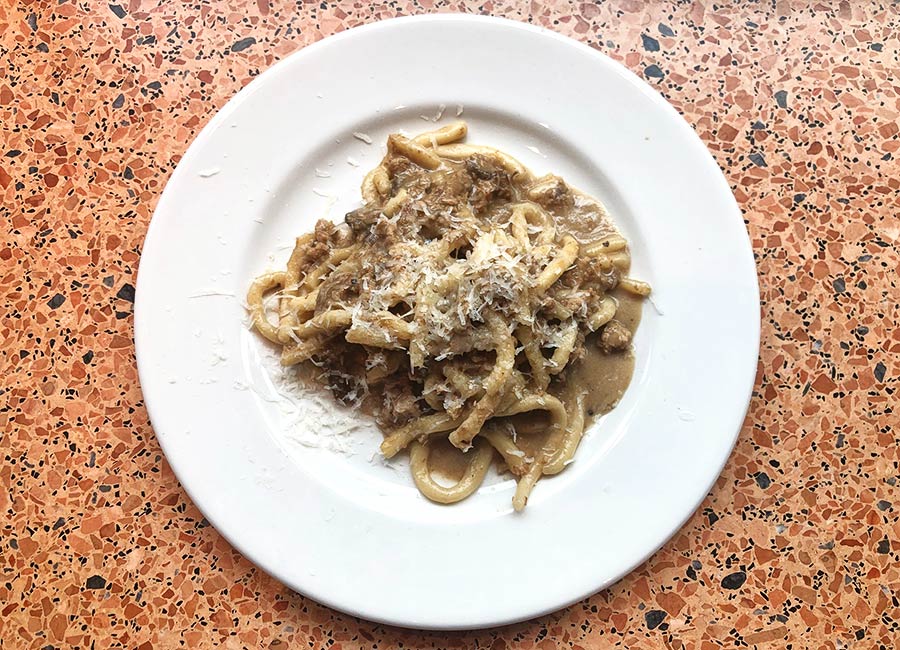 What: Proper pasta and antipasti

For 75 years, there's been a Lina Stores deli in Soho and they've gotten pretty good at pasta in that time. This follows their excellent Soho pasta restaurant and if you've got a pasta craving while shopping on Oxford Street, this will be the place to go. London's been getting great fresh pasta of late and Lina Stores is among the best. 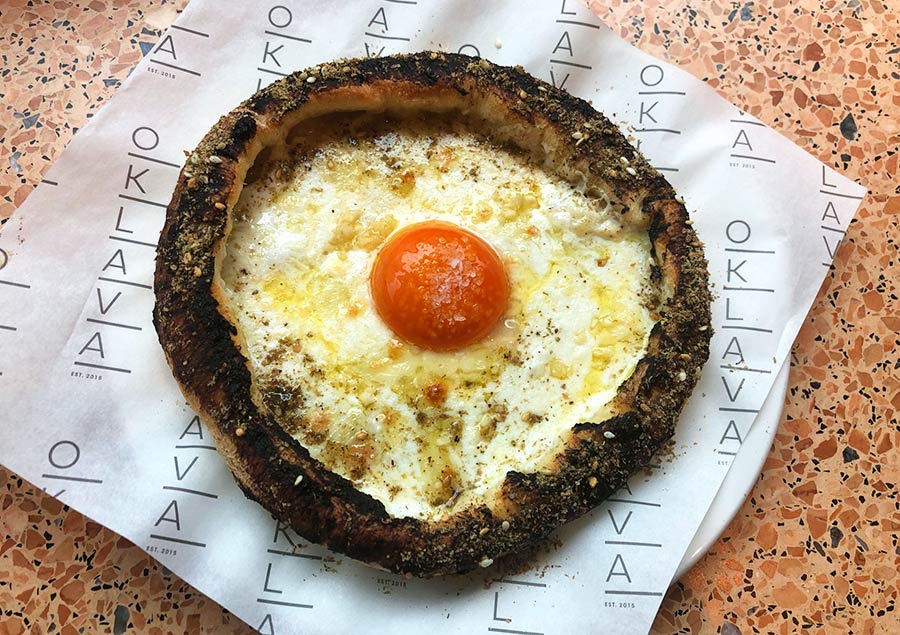 Oklava has been a big hit for chef Selin Kiazim in Shoreditch and there's also the great Kyseri in nearby Fitzrovia. This brings a few new dishes to the table - and we've been ordered to come back and try the Iskender. Look out for breakfast soon - with toasted bacon sandwiches and halloumi sandwiches on the menu. 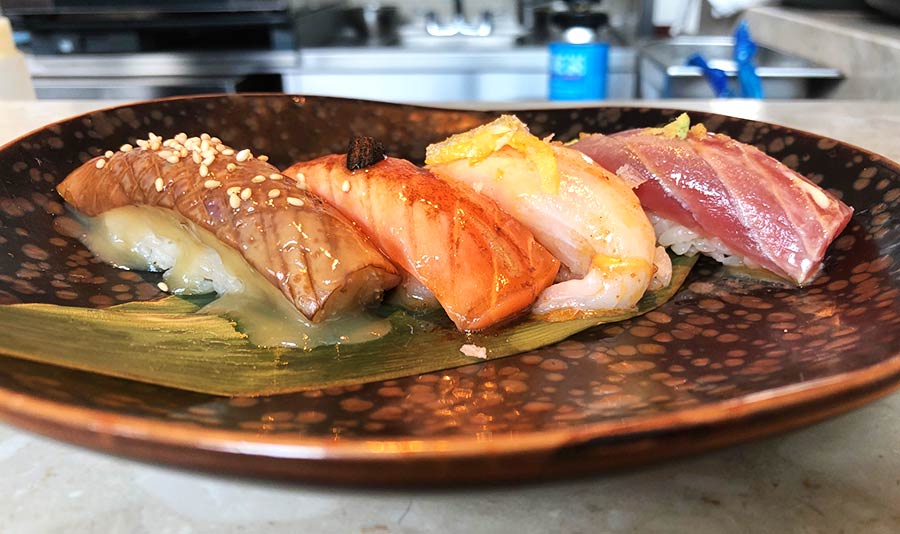 On the menu: The above plus Chotto ceviche (£7.50), slow-braised beef, teriyaki and mash (£12.50), sushi rolls inc spicy tuna (6 pieces, £9), a nikkei dessert selection including Peruvian chocolate crema (£8) and more.

Chotto Matte is Kurt Zdesar's Nikkei restaurant, nearby in Soho, and this brings a selection of what's on offer there to Arcade. We opted for some sushi and can strongly recommend getting a counter seat here so you can watch the sushi chef in action. 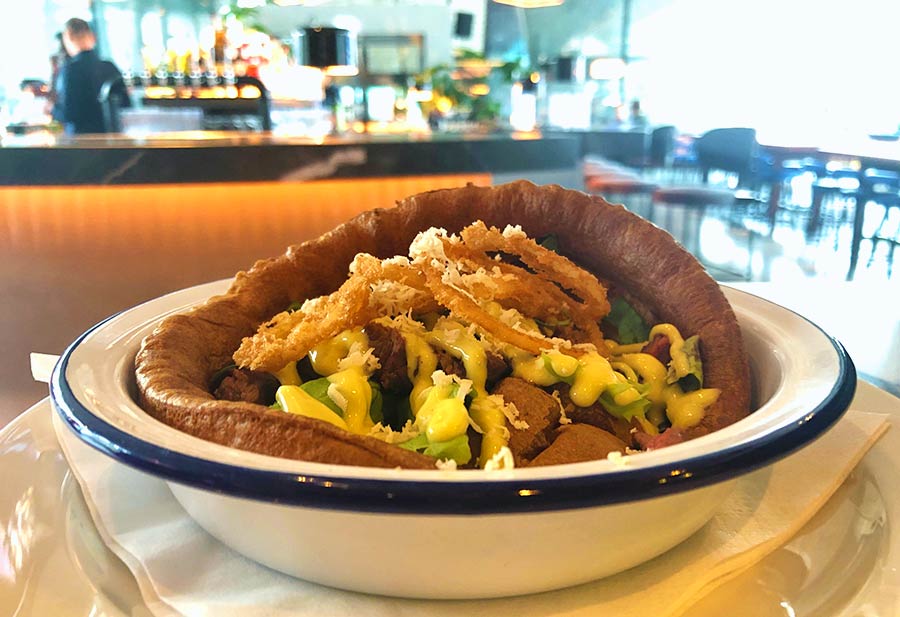 The main Flat Iron exclusive - Steak and Yorkshire - steak on a bed of salad with wasabi and mustard sauce, topped with horseradish and onion (£8). Better still, you can pimp this up with cep and peppercorn cream (+£1.50) or brown butter hollandaise sauce (+1).

On the menu: The above plus charcoal-grilled featherblade tip (£12), wagyu dripping fries (£4.50) and Workshop Salad (£4). They'll also be doing breakfast soon - a breakfast steak bap with truffle and avocado (£5).

Best known for their affordable steak restaurants - which are all hugely popular - this sees Flat Iron take up a space in Arcade where they'll be experimenting with new dishes. So if you love their restaurants and want to try something new from them - this is the place to go. 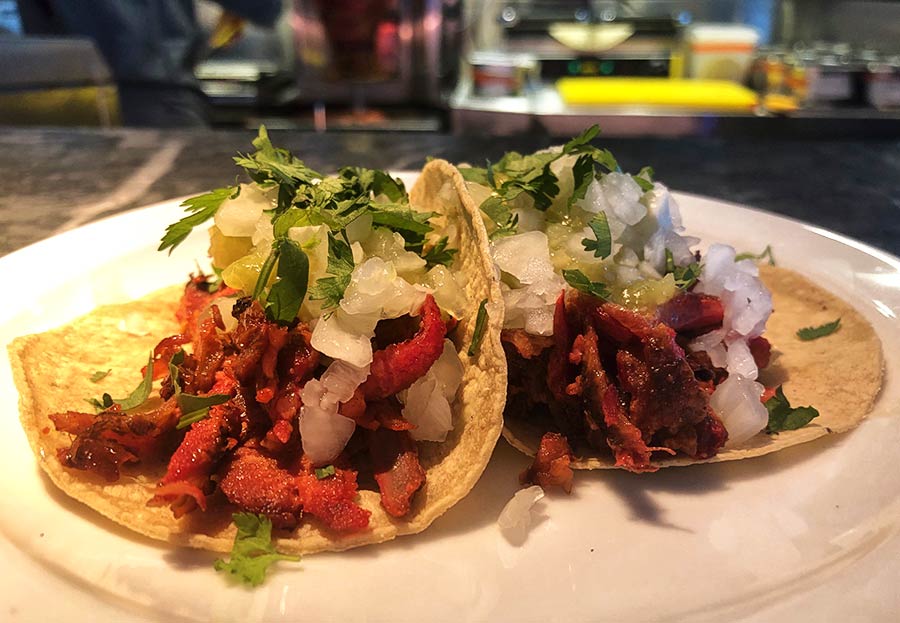 The classic Tacos Al Pastor - 24-hour marinated pork shoulder, caramelised pineapple, guacamole taquero salsa, white onion, coriander and cheese (£6.95 for two). You'll see the pork grilling just behind the counter and won't be able to avoid ordering one of these.

What: Tacos and gringas

This is the Arcade offshoot for El Pastor, with the focus being around tacos and tortilla wraps. Created by the Harts Group (also behind Barrafina), El Pastor is behind some of the best tacos in town - we have quite the love for their Baja fish tacos. Top tip - get the guacamole. 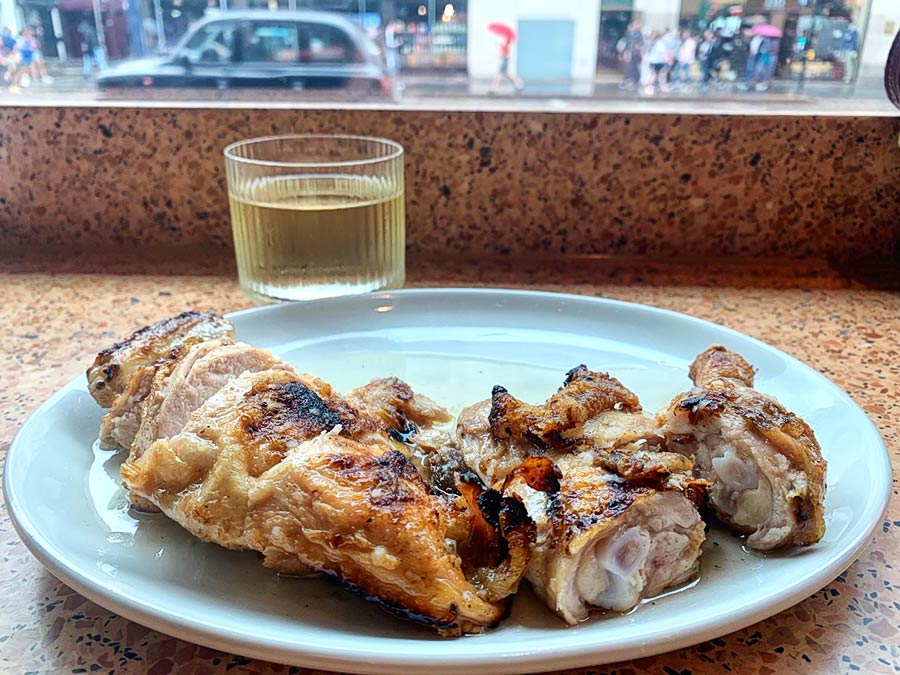 On the menu: The above plus grilled chorizo (£5), charred cauliflower (£5), Batatas Fritas fries (£4), and various salads. Their Portuguese custard tarts are deservedly popular.

This is a mini version of Casa do Frango, which was voted as Hot Dinners readers' favourite new restaurant of 2018. So if you fancy some of their excellent chicken when you're not south of the river, head here.

Crikey, that's a lot of food. What's available on the drink front?

As mentioned, if you want a drink then the main place to come to is the central bar. There's an affordable selection of wines - it starts at £19.50 for the house red/white and most of the reds are in the sub £30 price point (although you can get some Laurent Perrier for £49 if you fancy). Cocktails are all £9 - with three available on tap if you're in a rush (Green Gimlet, Hot Pink Margarita or an Espresso Martini) and they've their own beer on tap as well.

If you're just dropping in and don't fancy booze, there are smoothies for a fiver, all the usual softs and what we thought was a reasonable £3.50 for a 750ml bottle of still/sparkling water.

The past couple of years of openings in London have steadily raised our expectations of what a food court in London should achieve - and Arcade Food Theatre further boosts that. It's in an extremely handy spot (really ideal for just popping in and grabbing one or two dishes - or even just as a meeting point for a quick drink) and the range of food on offer is among the best in town.

We heard it was crazy busy during the soft launch, but it's settled down now and it's definitely a prime spot for lunch, which was when we visited. Pop in to try a couple of snacks or grab a table for an evening session and we think you'll be justly rewarded here. We'll be heading back for sure.

Hot Dinners ate as guests of Arcade Food Theatre. Prices are correct at the time of writing.