[SIGPLUS_EXCEPTION_SOURCE] Image source is expected to be a full URL or a path relative to the image base folder specified in the back-end but /blog/2013/merchants/gallery is neither a URL nor a relative path to an existing file or folder.
0
Shares 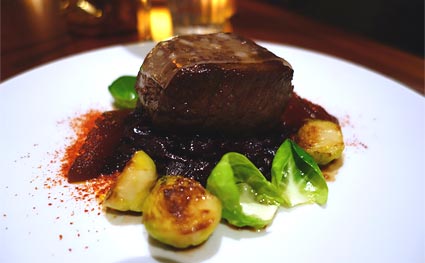 What can you tell us about Merchants Tavern

This sees Angela Hartnett teaming up with Dominic Lake and Patrick Clayton-Malone of canteen to launch a new bar and restaurant in the heart of Shoreditch, It's Hartnett's second of three restaurants opening this year (she's starting to rival another Ramsay alumni, Jason Atherton, in this regard) and in the kitchen is Neil Borthwick, who was previously at the Square and the Connaught (he's also Angela Hartnett's partner). Front of house is Thomas Blythe, previously at Fino and St John, so you can be sure you'll be looked after.

It's just off Great Eastern Street - pretty much half way between Old Street and Shoreditch High Street. it's in the building that used to house Cantaloupe - one of the first big restaurants to open in Shoreditch way back when, but there have been some major changes to the building since then, and it all seems much bigger then before (the bar space has been lowered, we were told).

It's Shoreditch so there are LOADS of places nearby - The Clove Club, Calloh Callay and Casa Negra are just some of the nearby places worth mentioning. However, we have to say that we really do like the look of the bar at Merchants Tavern too. The cocktails are good and strong (The Ezra Street Runner with Bacardi, lime, charteue, mint agave and absinth was particularly lethal) and are priced around the £8.50 - £9.50 mark. The bar itself looks much more laidback than many of the bars in the area (we love Casa Negra, but we wouldn't pop in there for a quiet drink). So if you're looking for something of a respite from the louder aspects of Shoreditch, this might end up being a haven.

The bar snacks also look rather tempting too - both the Ogleshield and ham toastie (£8) and the Pigs head kremeski (£4)  have our names on them on a return visit.

It's not your typical Shoreditch restaurant - coming across more like a Fitzrovia restaurant in Shoreditch - i.e. somewhere in between Mayfair and Soho in vibe. That's no bad thing for this area. It's not somewhere to go for a crazy night out but there was a strong buzz in the room when we went.

And what can I expect from the food.

It's a seasonal menu, and on top of that there are specials too - the venison shepherd's pie that was on offer when we went was tempting, but we decided to stick to the main menu.

It's a standard starter/main/desserts menu (something we're increasingly glad to see these days,) and it's a menu that really does read well - with a very seasonal focus in both the ingredients and cooking.The must-order dish of the restaurant when we went was the hogget broth with pearl barley and Berkswell toast. This was a showstopping broth and absolutely perfect as the cold nights arrive. And any soup that comes with a (remarkably good) cheese toastie to dip in it is an instant winner. It's definitely one of our dishes of the year.

The rest of the menu is certainly accomplished - but it never quite scaled the heights of that first dish. We had the roast quail to start with, and the mallard and roast venison for mains. Each of the mains had touches of brilliance - the duck's salardaise potatoes (cooked in duck fat) were wonderful and the venison was topped with wafer-thin lardo. A honey tart with malt whiskey ice cream for dessert was another winner. So all was very good, just perhaps a little unmemorable.

We started with a glass of Cremant de Loire, Domaine de Veilloux at £7.50 and then went on to to a bottle of Verdicchio dei Casteli di Jesi at £39. Both were delicious, but it has to be said that the wine list really is quite punchy here with not a single bottle under £20 and only two under £30.

We really enjoyed our night out at Merchants Tavern. There are flashes of brilliance there, but we think it needs a few more must-have dishes like that broth on the menu to really hit home. The bar's bound to be a huge attraction and you should definitely pop along there too to try a good cocktail or two to wash down some interesting bar snacks. We'll keep an eye on the restaurant menu as there's real potential there.

Prices were correct at time of writing. Hot Dinners ate as guests of the Merchants Tavern.