Amaranto at the Four Seasons; deluxe Italian in Mayfair

The recent relauch of the Savoy Hotel got so much press that another major London hotel revamp seems to have gone almost under the radar. The Four Seasons Park Lane closed n 2008 for just over two years for a £125 million overhaul using Pierre-Yves Rochon, the same designer as The Savoy to propel it into the 21st century. If you've been before, apparently you'll hardly recognise the place.  For us, it was our first visit for a hotel that we really hadn't considered before as a great dinner or drinking destination in London.

We were invited to put Amaranto through its paces. This is the main eating and drinking space for the hotel, covering everything from the bar to lounge and restaurant. We chose to sit in the main dining room, noting that there's a large outside space with heaters which is bound to be popular come Summer. Decked out in deep dark reds, the restaurant isn't a typical looking Italian affair but it is very luxe (they even had a stool for our handbag). There's a particularly nice looking private dining room with a massive round table here which can be closed off or open to the dining room as you wish.

In the kitchens is Adriano Cavagnini, who's come over from Hotel Eden in Rome while the Head Chef is Davide Degiovanni who has worked in Ristorante Semplice and Locanda Locatelli.

While many writers believe that the wine list can enhance a restaurant experience, for greedy Hot Dinners it can often be the calibre of the bread basket and Amaranto's was one of the best we've eaten in a long time. We were each presented with our own balsamic and olive oil dishes as well as a helping of butter with red salt which was an nice start. And then we fell upon the bread - the gorgeous focaccia with Stilton and an amazing sourdough with anchovies. Each was incredibly good and yes, we had to order another basket.

As we were polishing that off, the starters arrived. We opted first for the seared wagyu beef with pecorino and olive ravioli. This was one of the priciest items on the menu at £20 for a starter. The beef was great but the miniscule olive ravioli was where all the taste was at in this dish. We also tried the carspante tre modi - scallops presented three ways - as carpaccio, tartar with blood orange and seared in pancetta alla carbonara.  Which the carpaccio didn't quite work, the blood orange proved an excellent companion to the tartar. We really loved the alla carbonara version - wrapped and seared in wafer-thin pancetta. 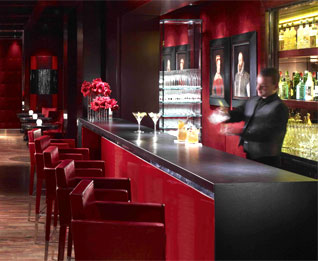 There's plenty of meat or fish to choose from, but we thought we'd try the pasta for our mains, the first of which was a wholemeal ravioli stuffed with rabbit in a vermentino broth with black winter truffle. This was the standout dish of the meal - excellent pasta filled with rich rabbit that combined perfectly with the broth and a good example of what the kitchen is capable of. We'd highly recommend it. We also tried the Cornish crab taglioni with braised artichokes and lemon zest which, while it wouldn't win any beauty prizes, was fabulous with a great bite to the talioni and plenty of crab.

Both main dishes were paired with a light Pinot Noir, chosen for us by the sommellier, who had previously worked at the French Embassy. He'd joined the hotel long before its opening, helping to create the mainly Italian list at Amaranto before it opened.

Finally, we ended up on dessert.  We opted for the "Six little sins" chocolate dessert-- and the  warm coconut cake with marinated pineapple, milk ice cream and honey.  The chocolate creation was pleasingly rich - featuring everything from chocolate covered space dust to the now ubiquitous melting globe of chocolate - but it was the coconut cake that really made us happy - and was a worthwhile competitor to the Tipsy Pudding from Dinner by Heston.

There's no getting around the fact that Amaranto is an expensive place to eat - with a particularly punchy wine list. But, that said, there are well priced wines on the menu if you search for them and the pasta main courses really are good value for the quality on show.  All in all, it's an excellent Italian restaurant in an extraordinarily plush setting, bound to be a hit with the banking fraternity, but that shouldn't put you off!

Find out more about Amaranto