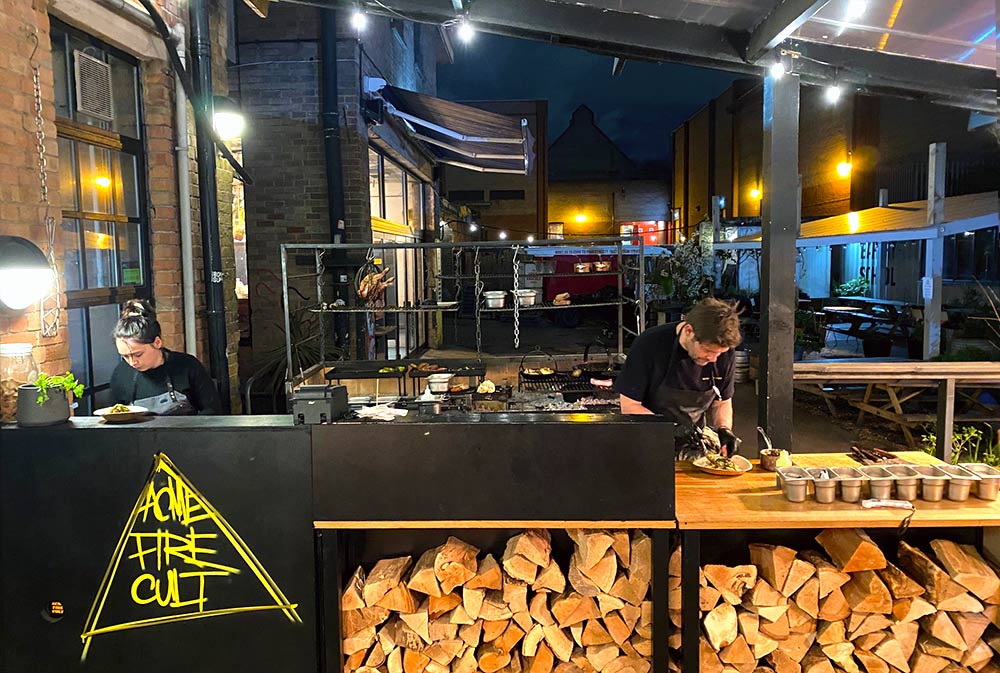 What can you tell me about Acme Fire Cult?

The restaurant comes from two chefs who previously worked (and built up a great reputation) at St Leonards in Shoreditch,  Andrew Clarke and Daniel Watkins. Here they've teamed up with 40FT Brewery's Steve Ryan to create a restaurant that's, as the name indicates, all about cooking over fire.

If you've ever been to the 40FT taproom or to Dusty Knuckle in Dalston - then you'll find it in the same courtyard, right next to them. If you haven't - then head down Abbot Street (about mid-way between either of the Dalston Overgrounds stations, off Dalston Lane) and you'll find it right at the end. It's a little bit of a hidden drink/food oasis in the area.

Where should we go for a drink first (or after)?

The most obvious advice is to say right next door at the 40FT Brewery taproom - and that goes double for when the weather is warm and the sun is shining. Otherwise, one of our favourite wine bars in London is nearby - Newcomer Wines. That's very handy for one more drink before you dash for the overground that's just across the street. 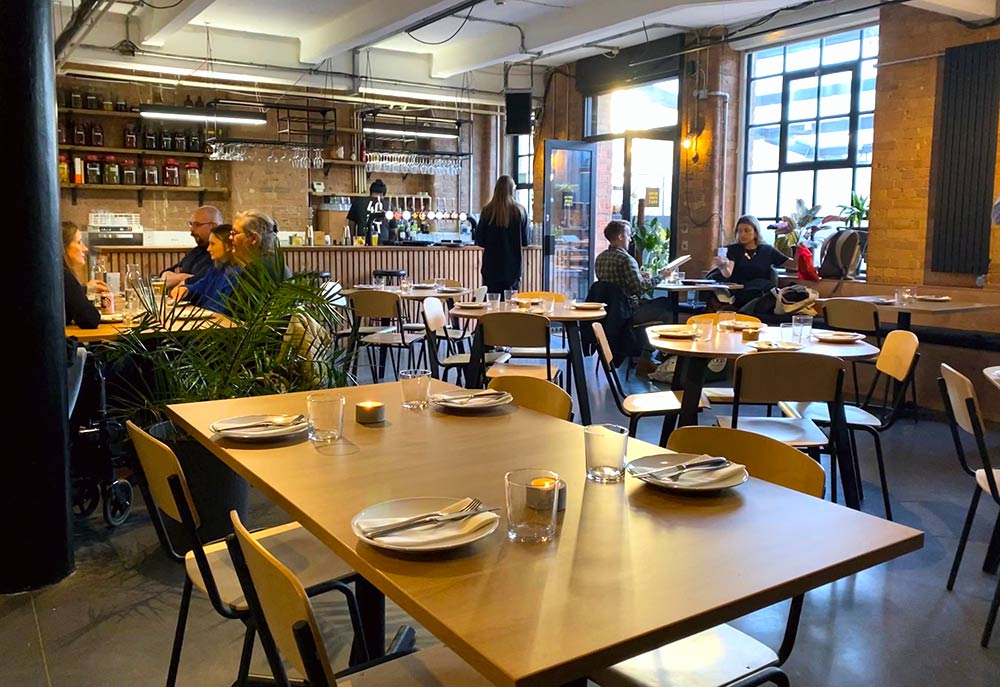 Any recommendations on where to sit?

There's plenty of space outside (and that's heated and covered too) but we think there's a real buzzy vibe to the restaurant space indoors, so that's the place to be. In there, we rather liked the look of the small booth for four, pictured below. 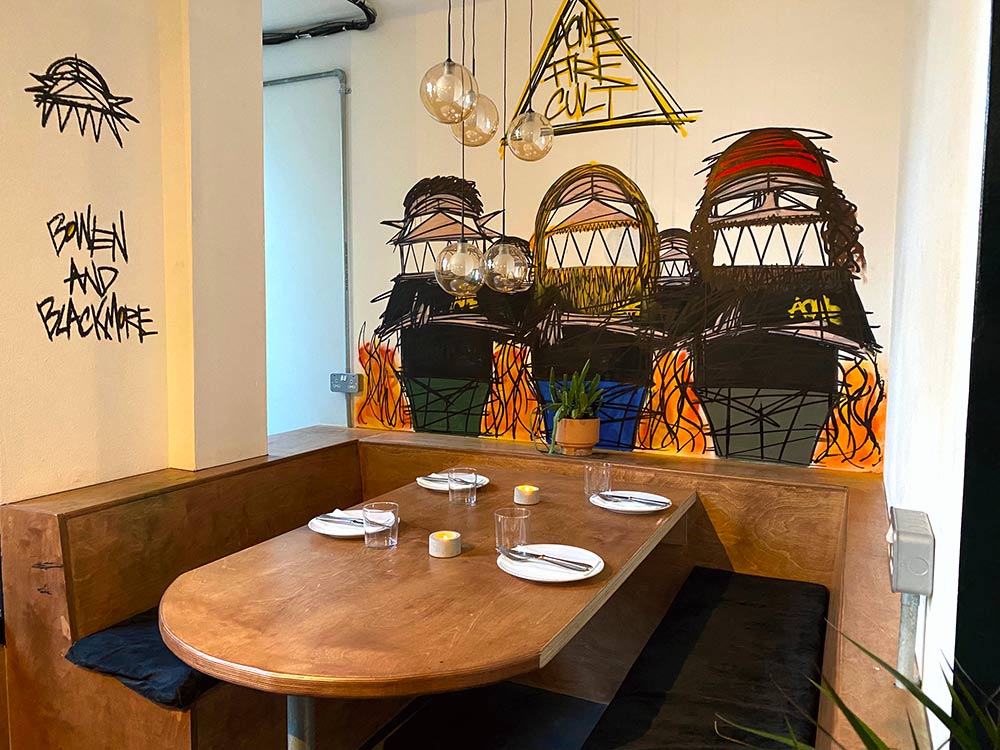 The only booth in the restaurant and hands down the table to grab, if you can.

So what can we expect from the cooking?

There's one thing that we hadn't quite grasped when writing about Acme Fire Cult before - that the bulk of the cooking really is all done on the grill outside. Just before the entrance to the restaurant is a huge metal contraption and that's where anything that isn't prepared in advance (most of the menu) is cooked on the night - you can see that in the photo at the top of the page.

They do have one of the shipping containers as a prep-kitchen, but other than that what you see above is actually the kitchen. It really is quite an impressive feat. Note that, even though it's outside, that smoky smell may linger on your clothes, so dress appropriately.

As mentioned, what's on offer is comprised primarily of food that can be cooked over that grill. Veg plays a strong part in the menu, which takes its influences from a broad church. Low waste also plays a big part in both the food itself and the construction of the restaurant. You can expect the menu to change regularly - but to give you a taster, here's what we had on the night: 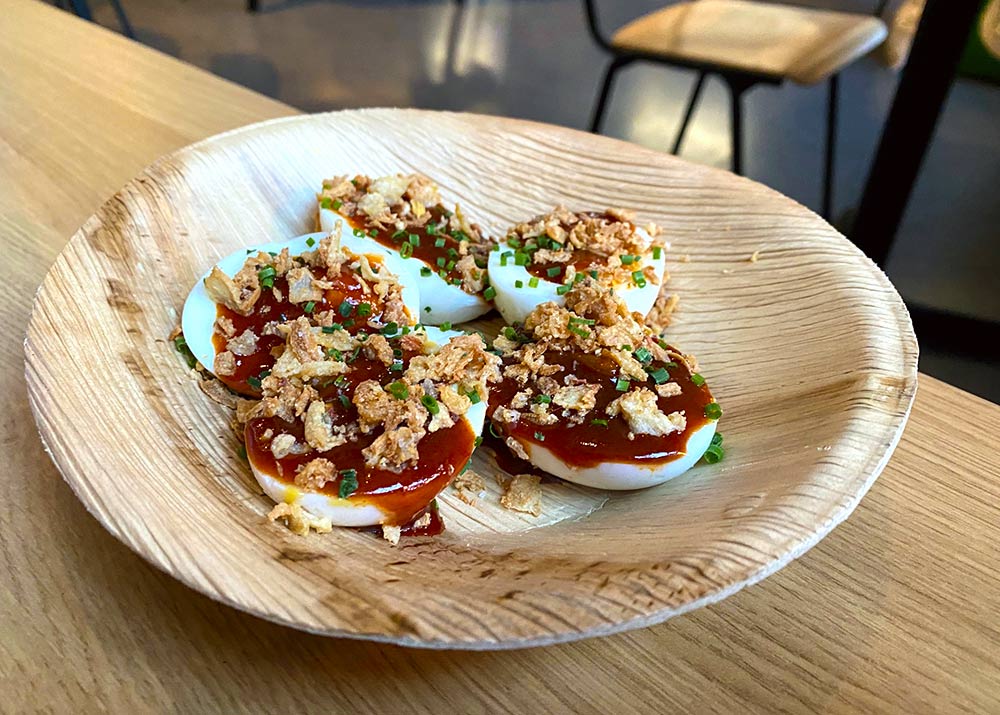 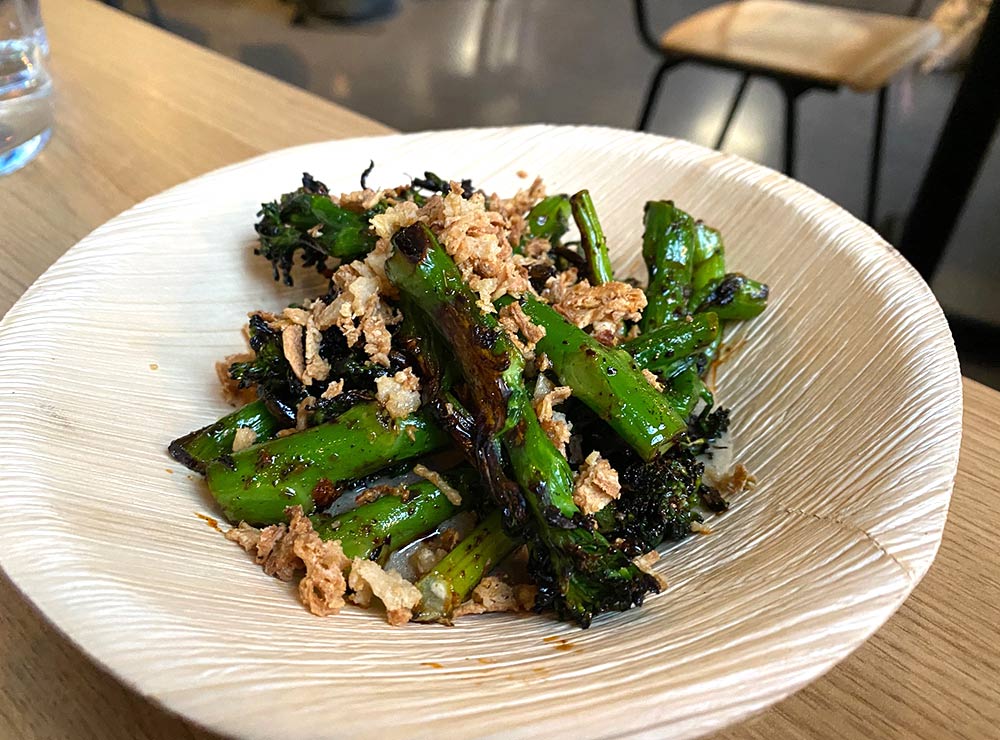 As mentioned - there's a strong showing for vegetables on the menu. This is sprouting broccoli with burnt onion soubise and ancho oil (£8) 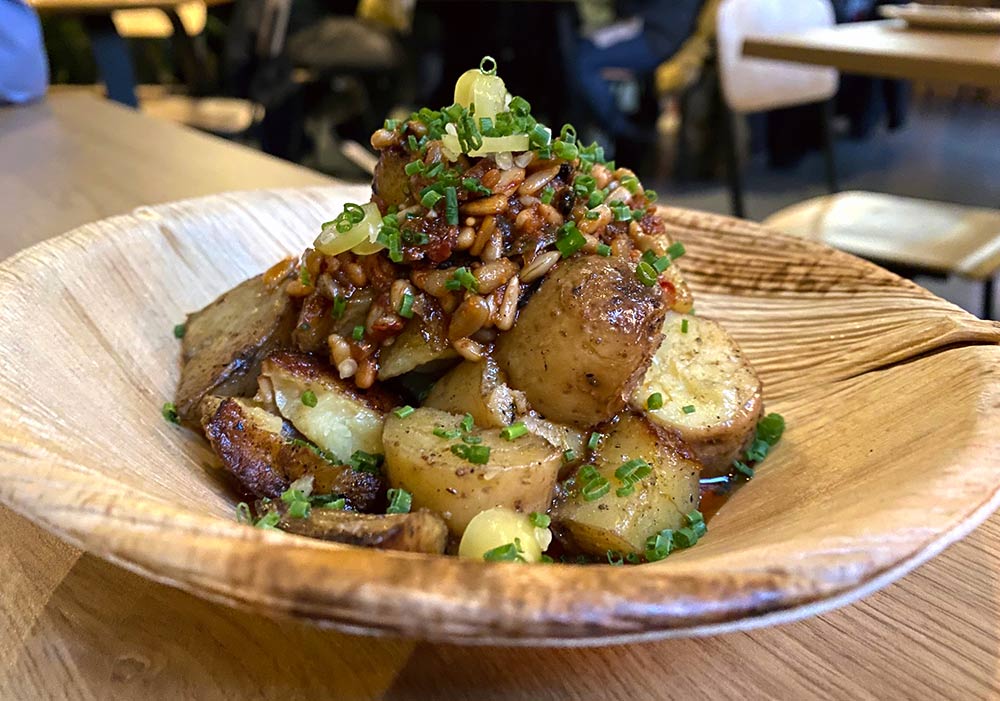 A menu can always win a place in our hearts with a good potato dish. These are smoked potatoes with tahini mayo (hidden underneath) and seed rayu. 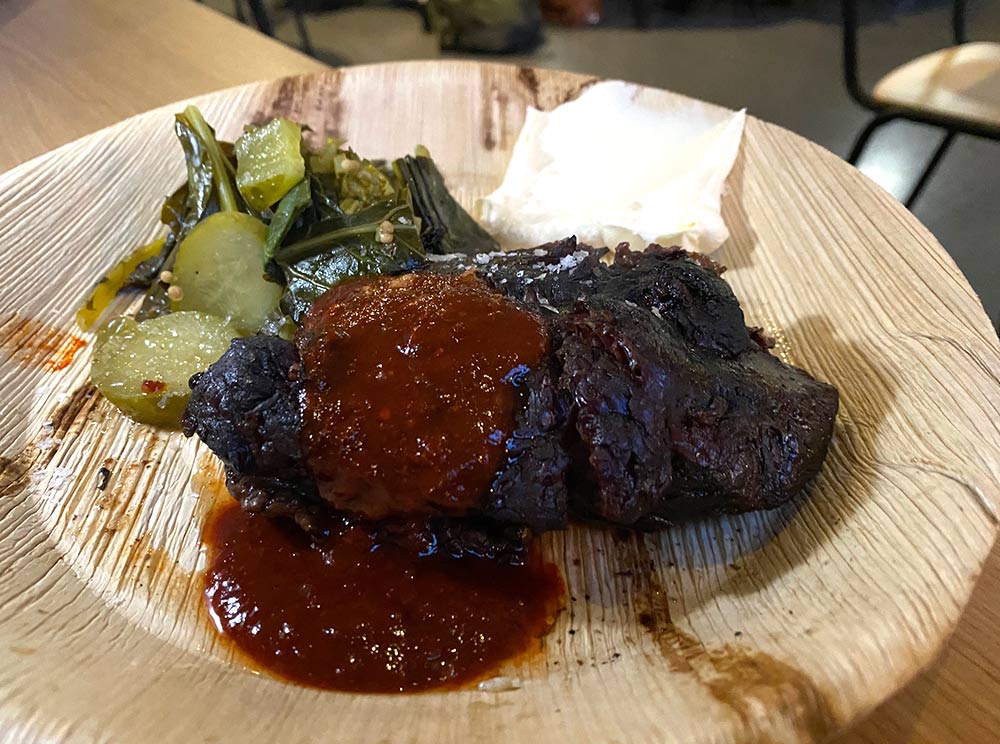 One of the larger dishes - the ox cheek with ancho koji, mustard greens and pickles (£19) - delivered still smoking from the grill, jet black but it fell apart. 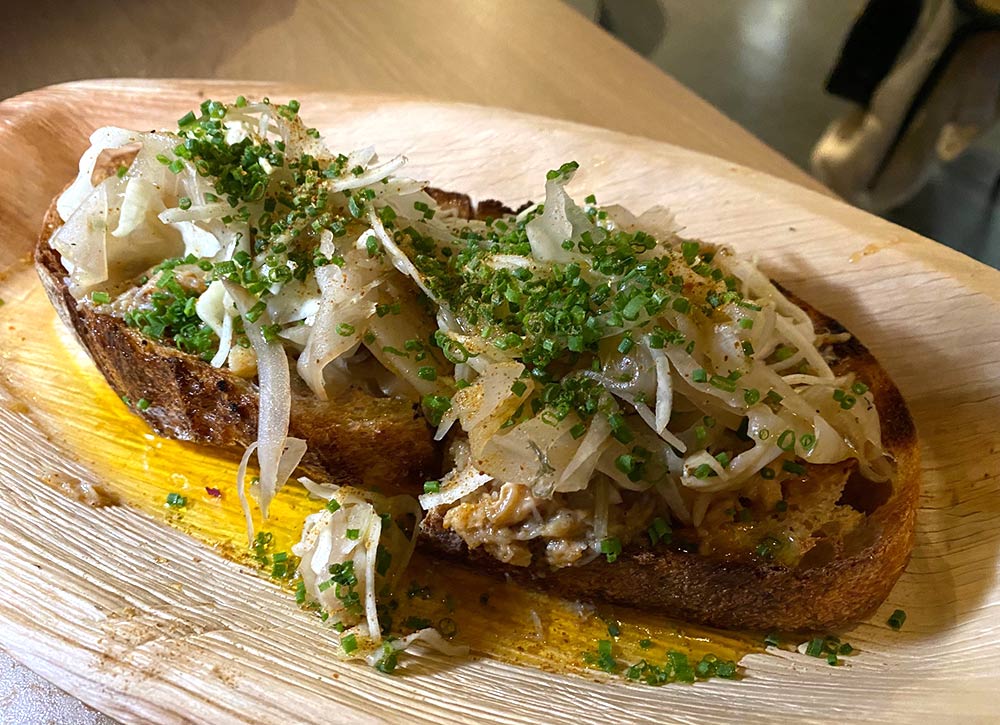 Hands down the dish of the night - Dorset crab with bone marrow, salted cabbage and jalapeno verde on sourdough (£16). The crab and bone marrow are an incredibly powerful combo - do not miss this. We're pretty sure that's Dusty Knuckle sourdough putting in an appearance here. 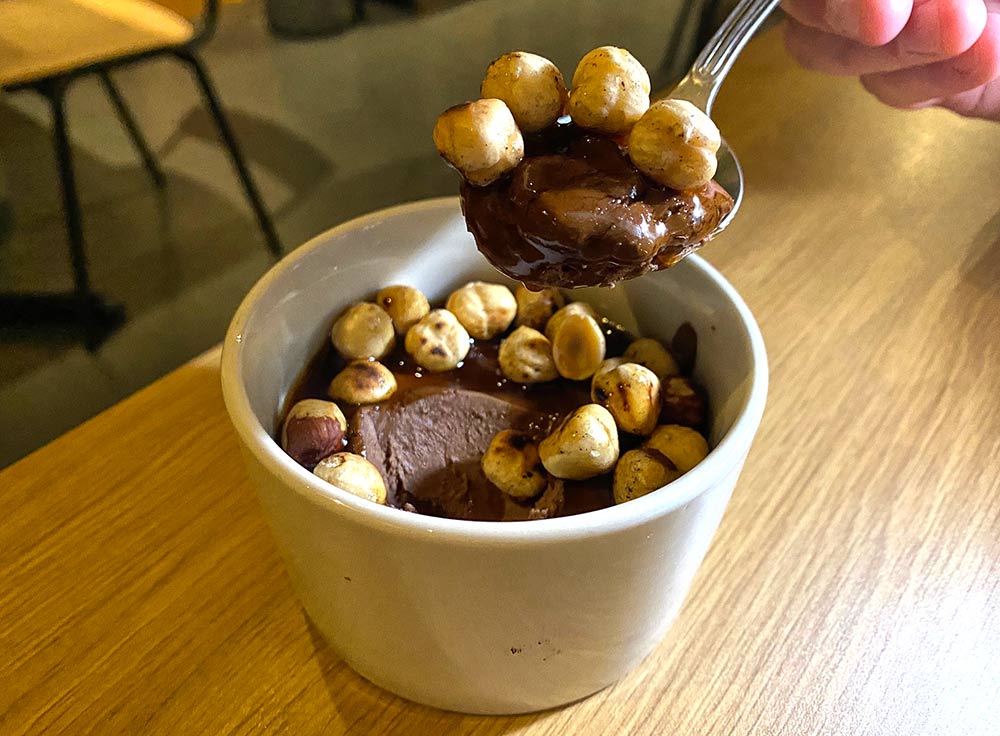 There was just one dessert when we visited - this hazelnut chocolate ganache with a beer molasses topping (£6) - a fair bit of the 40FT beer makes its way into the cooking at Acme Fire Cult.

All of that's just a small selection from a menu that's surprisingly large given that there were only two people manning the grill on our visit. With all that work, we think they could maybe cut it down a little and make it tighter - as there are some real winners on there.

Looking at other tables with food envy we'd say that other things to keep an eye out for are the half chicken with vadouvan butter (£36), the grilled hispi cabbage with pumpkin seed pistou (£7) and the mutton merguez with wild garlic verde (£14).

Obviously, if you're into your beer then you're going to do very well indeed here. You'll have access to most of the 40FT Catalogue (a personal favourite London brewery of ours) as well as a number of special beers that you'll only find here and at the brewery. Given the close association with the brewery, prices are pretty good at £5-6 a pint.

It's not all about beer though. There's a small cocktail list (£7-£8) with classics like a mezcal negroni, Daquiri and a Tom Collins on the list (as well as a "Lagerito" if you want to combine your cocktails and beer).

There's a short wine list too, but it's a little punchier with the entry red ("Lo Sang del Paid" from Marcilliac) being £31 and the base white (Dry Furmint) at £38. 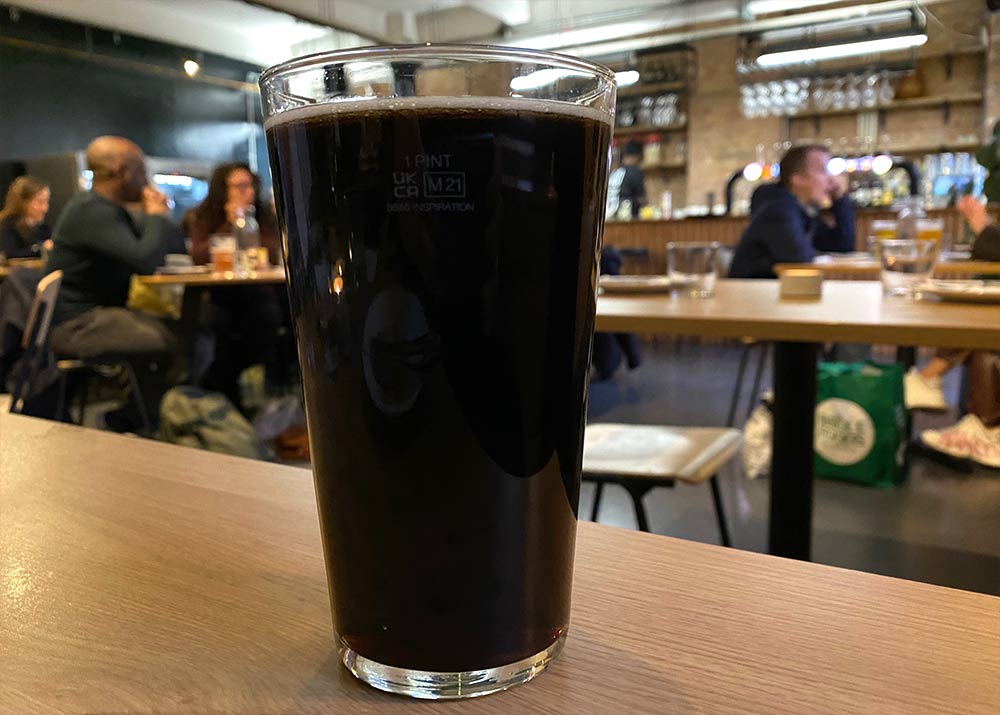 You really should get this, the 40FT Acme Dark Lager. The first of many seasonal beers they'll have in the restaurant (£5)

Acme Fire Cult is an extremely promising addition to the Abbot Street "carpark" in Dalston. There's already a really buzzy vibe about the restaurant and there are some excellent dishes in there. A little tightening of the menu is needed, but we visited very early so that's to be expected. Without a doubt, it's one to watch.

Hot Dinners ate as guests of Acme Fire Cult. Prices are correct at the time of writing.

Where is it? Abbot Street Car Park, London, E8 3DP