A second coming from the Hawksmoor crowd - we Test Drive Foxlow 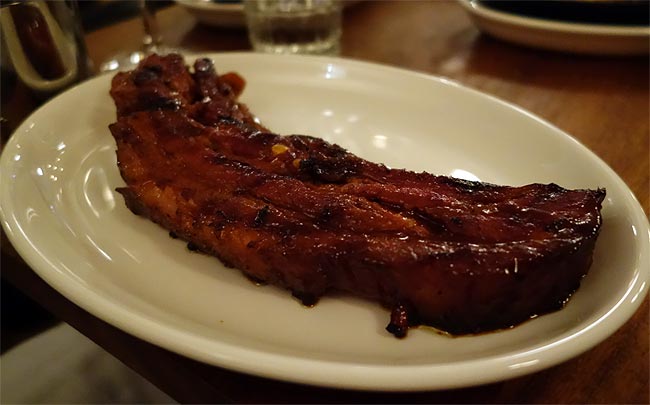 What can you tell us about Foxlow?

It's the new restaurant from Huw Gott and Will Beckett, the people behind Hawksmoor. This is their first non-Hawksmoor restaurant since the Spitalfields restaurant was launched, so all eyes are on them to see what's next.

How different is it to their other restaurants?

There's certainly a familiarity about the set up as you go in. The staff, always one of the highlights of Hawksmoor, are as lovely as ever and the attention to detail is as fastidious as in its sibling restaurants. The bar knocks out some great cocktails (albeit from a more selective list than the Hawksmoor restaurants) and there are still steaks on the menu (but again, from a reduced list). It also has Richard Turner overseeing the menu so there are definitely echoes of their previous restaurants here.

It's on St John Street, just a few minutes from Farringdon station. Foxlow has taken over the building that used to be North Road, just across the road from Burger and Lobster, but you'll hardly recognise the place if you've been before.

Anyone who's a fan of Hawksmoor will love this restaurant, and won't come away disappointed. It occasionally feels like a next-level, more grown-up version of the "dirty food" culture that's been prevalent in London in recent years.

So where should I meet for a drink first?

There are a few of our favourite places in London quite close by. We love the bar at the Zetter Townhouse and we often pop into St John for a pre-dinner drink too. We'd happily recommend both of those places and also liked the Longroom nearby too.

But save yourself for a cocktail or two at Foxlow too. The Hawksmoor crowd are known for their cocktails (winning an OFM award only a few weeks back) and we loved our two selections, particularly the St John's cocktail (gin, prune eau de vie, honey and lemon for 8).

And when I get there, where should I sit?

Despite seating almost as many as the original in Spitalfields, Foxlow seems more intimate than their other locations, as it's split into two rooms downstairs and a space upstairs that is primarily booth seating (so that section is best for groups). We were personally very happy with our downstairs corner seat at the back facing into the room. We're pretty fond of an outward facing corner seat and think it's the best seat in the restaurant if there are two of you.

We left Foxlow having ever so slightly over-ordered (quelle surprise), but it's the kind of menu that makes it oh-so-easy to do so, with so much to choose from.

We would definitely recommend some bar snacks to kick things off with. Of those, the anchovy and goats butter crisps were surprisingly great (we weren't expecting whole anchovies but it worked very well). These are likely to change regularly.

Foxlow is Huw and Will's first restaurant to have a salad bar too. We only touched on it with a small dish of acorn squash and Moroccan spices. In honesty, it didn't quite convert us to salads over meat, but this and some of the main dishes do mean that Foxlow is a little more vegetarian-friendly than other Hawksmoors. Unless you order the chips with bacon salt. Which you absolutely should do, as they taste like a chip version of smoky bacon crisps. We simply couldn't stop stuffing our face with them.

Overall, the menu is incredibly enticing, but we'll specifically mention a couple of the main dishes. We'd say that one of the ribs are a must-have. Either 10 hour beef shortrib or the 8 hour bacon rib (£16 each) that we had will probably be the big hits. The bacon rib was absolutely massive, utterly delicious and not over-salted as it could so easily have been. It made us want to come back and try the beef rib. But it's not all about the ribs - the pluma was easily one of the best cooked pieces of meat we've had all year.

It you are missing the steaks, then have no fear, there will always be daily steak specials, but with different cuts than you'd expect from the main Hawksmoor restaurants.

It's worth saving yourself for dessert too, as the soft serve sundaes (£5), and definitely the bourbon caramel one we ordered, are really worth hanging on for. You could happily share one of these between two.

As with their last spot, Hawksmoor Air Street, there is a must-have sweet too and once again this features salted caramel. You absolutely cannot leave without getting a packet of the salted caramel popcorn (which has pecans and more in there too) for £3. Even if you just can't handle dessert, the popcorn comes in a very handy bag (see photo) that you can take away. You'll be kicking yourself the next day if you don't get a packet.

We've already mentioned the cocktails, and there's a selective wine list that starts at £16 and doesn't go up stratospherically from there either (something we've seen in other restaurants). However, it's worth mentioning that they are also featuring selected wines from guest partners for limited times. At the moment, they're partnering with Sager and Wilde, who have provided a select few bottles. We really like this link up between Foxlow and other local wine merchants and it should mean there's always something interesting on the list

Without doubt, the Hawksmoor boys are onto another big winner with Foxlow. It fits into the area perfectly and it has a menu that'll be changing regularly but with some instant successes that will continue to draw in the punters (those bacon salt fries and the popcorn for sure). Well worth a visit, if of course you can ever get a table.

Prices were correct at time of writing. Hot Dinners ate as guests of Foxlow.