[SIGPLUS_EXCEPTION_SOURCE] Image source is expected to be a full URL or a path relative to the image base folder specified in the back-end but /blog/2014/colony/gallery/ is neither a URL nor a relative path to an existing file or folder.
0
Shares 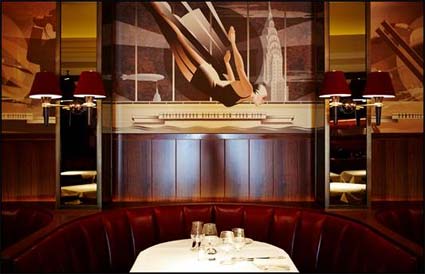 What do we need to know about The Colony Grill Room?

This is the latest opening (and the second this year) for Messrs Corbin and King, the pair that brought us The Wolseley, Delaunay and most recently Fischer's. For their new Mayfair restaurant they're evoking the spirit of the Grand Hotel grill rooms.

It's in The Beaumont, Corbin and King's first hotel, which - as you might imagine - is every bit as luxe and elegant as the two gents themselves. It's tucked away on Brown Hart Gardens, just off Oxford Street and a very short stroll from Selfridges.

Where should I meet friends for drinks first?

The beautiful bar here is an obvious choice and the cocktails are not at all badly priced - £10.50 for a Martini, or maybe £11.75 for a Manhattan (£19 at the Ritz just up the road). Alternatively there's the Chase bar at the Running Horse pub on nearby Davies Street or the Luggage Room at the Marriot on Grosvenor Square.

Where should I sit when I'm there?

Always a tricky subject when it comes to Corbin and King restaurants is the issue of the inner circle. In some of their restaurants (The Wolseley or Delaunay) it's much more obvious where the favoured folk are sitting. Here, we suppose it's the raised seating area, rather than the tables at ground level. Ideally you'll want a corner table to people watch or one of the large banquettes.

So the food - what can we expect?

There's plenty to please the eye (and wallet) on a quick perusal of the brunch menu here. You could pop in here for a grilled cheese sandwich with wallies for just £6.75 or a Chicken Pot Pie for £15.50. Both of which would be perfect for hungry shoppers or hotel guests wanting something small and simple.

Or you could do as we did and give the menu a good going over. We kicked off with smoked salmon and soda bread £14.75 and a really good black pudding hash £10.50, following that with the Colony Burger £15 which was nicely pink in the middle. Steak and eggs £25 is a deceptively simple dish that's actually easy to muck up, but here it was grilled just as we'd ordered it, served with a soft fried egg on top and with an equally perfectly trimmed mushroom topped with a roasted, crumbed tomato. Utterly greatcomfort food.

There was lot we wanted from the dessert section but in the end we narrowed it down to a last of the summer strawberry shortcake sundae (£7.50) and a generous slab of red velvet cake (£5.75).

There's a blessedly short wine list here which could teach a number of London restaurants a thing or two about editing and price points. Stone Barn Chardonnay from California £6 for 175ml stood up to the smoked salmon and we rather liked the Alicante red Laderas de El Seque (£8) - a blend of Monastrell and Syrah you can also find at Berry Bros - with our steak.

The Colony's situation (just off Oxford Street), its beautiful art deco decor and easy going (not to mention good value) menu make it hard to see how this won't win a slew of fans. The only problem you're going to have here is getting a table once word gets out.

Hot Dinners ate at The Colony Grill Room during its soft launch. Prices were correct at the time of writing.