A Holloway supperclub with ambition: we Test Drive Croft Kitchen 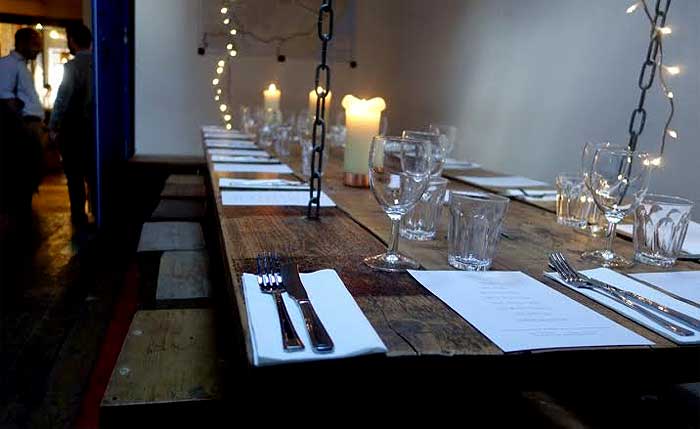 It's been far too long since we went to a London supperclub, so having written about the arrival of Croft Kitchen in Holloway a few weeks ago, we decided to rectify that. There were a few reasons why. First it was incredibly local, which is always a plus point (but that said it's barely a 5 minute walk from Highbury and Islington station - so pretty easy for transport). Secondly, the team involved had all manner of interesting places on their CVs.

Chef Phil Walther, worked at Mugaritz (No 6 on the World's 50 Best Restaurants List for 2015) as well as Ryugin (29 on the list) in Tokyo, Barrafina and at Koya. His colleague in the kitchen was Katy Sethna who is ex-Gordon Ramsay at Claridges and the front of house was ably coordinated by James Bidgood who used be the manager at Caravan Kings Cross. So far, so good and all reason enough for us to re-enter the supperclub scene.

Croft Kitchen, which is running for the foreseeable future at Vagabond Coffee from Thursday to Sunday, seemed to attract a pretty wide variety of folk from what we could see. We kicked off the evening with our first coffee martini for ages - and this one, made with Vagabond small batch coffee, vodka and kahlua's really worth ordering. There's a short cocktail and wine list too. We went for a bottle of Anma de Raimat Blanco - a blend of Chardonnay, Xarel-lo (no - us neither) and Albarino. It was £25 and worked with pretty much everything.

As for the food, given the teeny kitchen what came out of it was pretty impressive. The seven course tasting menu had a few real winners though - the mackerel with salted lemon and samphire was certainly one of the nicest mackerel dishes we have ever tried and we were also fans of the pulled lamb served with spring herbs and a smattering of burnt hay ash. Some courses could do with pumping up - the rillettes served with lovely thick slices of Peckham Rye was too mingy a portion given it was served en famille, but that was a small niggle from a really enjoyable meal. And for just £30, frankly the whole thing was a bit of a steal. Our verdict? A supperclub worth crossing town for.

Croft Kitchen is at Vagabond, 105 Holloway Road, London N7 8LT. Reservations can be made by emailing hellocroftkitchen@gmail.com. and by visiting Grub Club. Opening hours are Thursday to Sunday 7pm onwards.