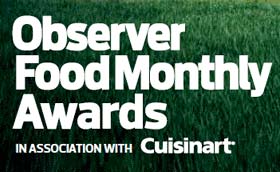 The Observer Food Monthly Awards is hands-down our favourite night of the year - a crazy evening where chefs, critics, bloggers, producers, butchers and wine folk all rub shoulders (and consume far more alcohol than is sensible).

Now in its ninth year, the awards seek to celebrate all aspects of the food industry. And they also give out the single best goody bag of any party we've ever been to - crammed with food and booze. Hurrah!

London, as ever, was suitably represented in this year's awards with Hot Dinners' favourite chefs the Young Turks being picked out as Best Newcomer, the Zetter Townhouse crowned best place to drink and Tayyabs the best cheap eats under £15 a head. Sadly Hot Dinners didn't manage to scoop Best Blog - but as we lost out to schoolgirl Martha Payne whose school dinners blog raised more than £100,000 for charity, we don't feel too badly about it. Thanks to all of you who voted for us - we love you all!