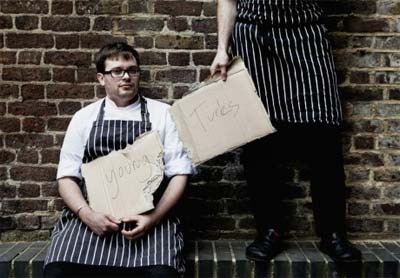 [Updated 1 July 2011: They've just extended their stay at Restaurants in Residence by three days from 5-7 July - so if you didn't get tickets the first time around you might be in luck!]

One of Hot Dinners' favourite meals this year has been the dinner by the Young Turks at the Loft.  But if you missed that, here's your chance to catch up with two of the hottest chefs in town, James Lowe and Isaac McHale.

From 23 June they'll be launching a week-long event with the Clove Club in a secret location in Canary Wharf as part of Restaurants in Residence.  The pop-up restaurant will seat 80 people per night in a building that will be torn down after the event, so it's your best chance to try some incredible food like this in a setting that will aim to recreate the vibe of the Dalston Clove Club.

We caught up with Young Turk James Lowe who also revealed that wine on the night will be provided by HGW Wines (who also supply St John) at a minimum mark-up.  You can decide to wine-match the four course meal on the night and if you do, the meal will also finish in classic Clove Club style with a shot of Poire William.

James told us "All the ingredients have been carefully sourced, so there's loganberries, cucumber flowers, tomatoes and wild marjoram from Kent.  The Lemon sole is served with elderflower and wild fennel picked from Mile End and Bow. We've got a big drum grill that we're going to burn apple wood from Chegworth Valley in Kent in - which is going to make the beef and onions AMAZING!  Finally, the dessert features a really old type of grain called beremeal (pronounced bear-meal) that grows on Orkney (where Isaac is from) as well as the loganberries."

Any dinner by the Young Turks comes with the highest recommendation from Hot Dinners so we'd urge you to book here.  We're already excited by the menu which can be found on the Young Turks website and you can book here.

And that's not all from Restaurent in Residence who will be hosting a new pop-up for four weeks including A Little (more) of What you Fancy,  Shacklewell Nights and the latest from pop-up specialists Bistrotheque, whose event will be striving for an 80s vibe.

For more on Restaurants in Residence, visit their website.