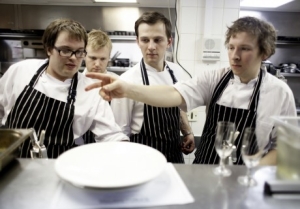 Our remit at Hot Dinners has always been to bring readers into the bubble - to let you know what's happening on the London restaurant scene. The Young Turks absolutely tick that box, being a collective of three of London's most exciting young chefs.

The group consists of Ben Greeno, trained up by Sat Bains, former sous-chef and then pastry chef at Noma, James Lowe - former Head Chef at St John Bread & Kitchen, having arrived there via River Cafe and The Fat Duck, and Isaac McHale who also has Noma on his cv as well as David Chang's Momofuku in New York and The Ledbury in London.

As well as running various pop-ups (Isaac was behind Elliott's in Victoria Park last summer and Ben Greeno had his own supperclub Tudor Road), the group have just announced a six day residency at Nuno Mendes' Loft Project on Kingsland Road from Tuesday 29 March - Sunday 3 April. Unlike the usual Loft Project nights which cost a punchy £120 per person, the Young Turks dinners will cost you £60 for cocktails, snacks and eight courses paired with wine.

Friday through to Sunday is booked out, but you can still get seats at the Tuesday to Thursday dinners. We've already booked our seats, so we'll see you there. To book email events@youngturks.co (and no - that's not a typo, that is the email address).