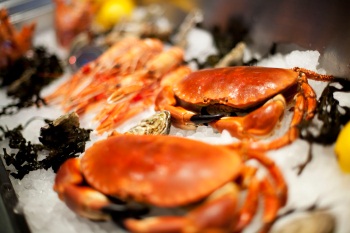 We're very fond of Wright Bros Soho, so the news that they're about to take on their most ambitious restaurant to date came as music to our ears. And what a venture. They're taking over what was Meson Los Barriles in Old Spitalfields market and turning it into what they're describing as a 'seafood mecca'.

Normally we try not to be too caught up in PR hyperbole, but the fact that they're putting a huge seawater tank into the middle of the restaurant stacked with 1400 live shellfish (with a further 9000 in holding tanks visible in the basement) allowing diners to choose their own live crab, lobster or oysters does sound rather impressive.

Dishes, as you've probably gathered by now, will be seafood focused so expect fruits de mer, bouillabaisse and clam chowder alongside dishes such as salmon pastrami, crab omelette and surf clams, pig cheek & coriander. This will also be the first time London diners (or for that matter European ones) have been able to order Canadian oysters such as Beau Soleil, Green Gables or Malpeques.

They've also brought together a great team for Wright Brothers Spitalfields. Head Chef will be David Cook who comes via Moro, Bocca di Lupo and 40 Maltby Street while front of house will be run by Richard Seldon who was opening GM at La Bodega Negra.

As for the space, it'll have room for 72 inside and a further 26 outside on the market terrace. They've also squeezed in a bar specialising in gin cocktails but also serving up craft ales, ciders and prosecco on tap.